A video game has sparked outrage over a scene in which players are instructed to kill a journalist.

Sniper 3D Assassin players are urged to fire at a reporter and ‘make him famous in a different way’ – in a mission called ‘Breaking News’.

If they hit the target, the screen flashes up with the message: ‘Mission accomplished – that’s a cover story’.

The game has prompted concern amid fears for the safety of journalists worldwide, and the level has since been removed, according to reports.

Mission: In the Breaking News level of the Sniper 3D Assassin game, players are urged to open fire on a journalist who is picking up ‘sensitive documents’ from a police officer

The game, developed by Brazil-based company TFG, is free to download on iPhones and Android devices.

The Breaking News scenario, which developers say is one of hundreds of levels in the game, begins with an explanation to players.

It reads: ‘A journalist bribed a cop and will pick up a briefcase from the cop. The briefcase is full of sensitive documents. Make him famous in a different way.’

The player, acting as a sniper, brandishes a weapon and watches as the corrupt policeman walks into a yard holding the red briefcase.

He is greeted by the journalist, a bearded man wearing a jacket and a yellow baseball cap and carrying a backpack.

The two characters appear to speak briefly as the briefcase is handed over.

To complete the level, the player then takes aim at the journalist through crosshairs and watches as a bullet flies towards him. 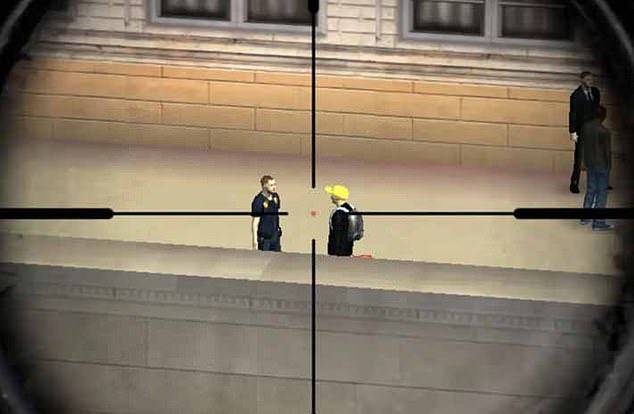 Target: The player looks at the journalist and police officer in the crosshairs and prepares to aim at the reporter’s head in one of the levels of the game

If successful, the bullet hits the reporter in the side of the head and sends blood pouring out of his skull.

The screen flashes up with the ‘mission accomplished’ message, rewarding the game player with currency to use in later levels.

The James Foley foundation, named after an American reporter who was beheaded by ISIS, led the criticism of the scene.

‘Very concerning to see a popular mobile game which allows users to kill a journalist at a time when violence against reporters is on the rise both in the U.S. and around the world,’ they said.

New York Times journalist Jamal Jordan said he had to have a ‘very long talk’ with his nephew after the 10-year-old showed him the game.

His colleague Lauren Hard said: ‘Well, this is horrifying’. 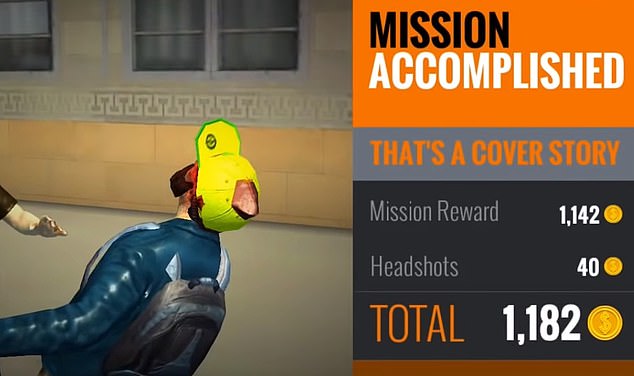 Completed: If the player successfully guns down the journalist, blood is seen pouring from the victim’s head while a message appears reading: ‘Mission accomplished – that’s a cover story’

NBC reporter Sergio Quintana said: ‘Not very comforting since some of my reporter friends have been shot at recently.’

According to HuffPost, the level has since been removed from the game after the backlash against developers.

‘At TFG, we work to create games that bring fun and entertainment to users all around the world. As such, we take feedback from our players very seriously.

‘After listening to our community today, we have decided to remove the mission Breaking News from the game.’

The game sparked concern after a number of threats to journalists, including the deadly shooting of five people at the Capital Gazette newsroom in Maryland.

More than 1,000 journalists have been killed because of their work in the last 12 years, according to the UK-based Centre for Freedom of the Media.