A scary attack was caught on video of a pair of dogs loose on Staten Island enter a woman’s backyard with one viciously attacking her smaller puppies outside — and inside her home.

The canine home invaders attacked Natalie Santiago and her one-year-old dog, Lady and her other dog, Boof, in the Great Kills section of Staten Island last year, according to SILive.com. The two dogs allegedly were also part of an incident in February.

A camera pointed at the backyard shows the moment when Santiago begins to call her own dogs as they park at something toward the front of the house on the driveway. 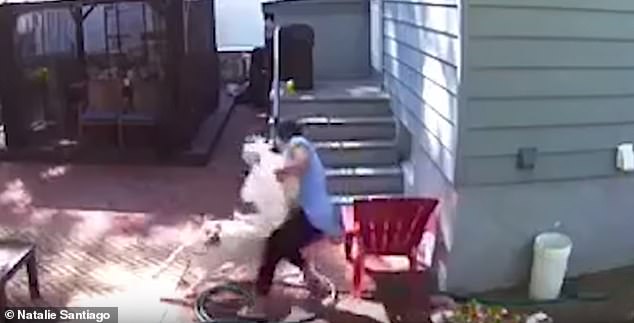 ‘When I looked, the big dog was there looking at us,’ said the homeowner.

She goes over to her puppies and can be heard saying ‘no’ repeatedly as she tries to grab the squirming, barking little dogs, when a large, white figure, thought to be a bulldog charges into the frame with its jaws agape.

Santiago, screaming, swings her pets away from the hulking intruder, but falls down before the steps to her home allowing the attacker to clamp onto one of her dogs.

She’s able to get back up and attempts to climb the stairs with the invading canine wither her every step of the way as another brown dog, allegedly a pit bull, scampers into the foreground from the driveway. 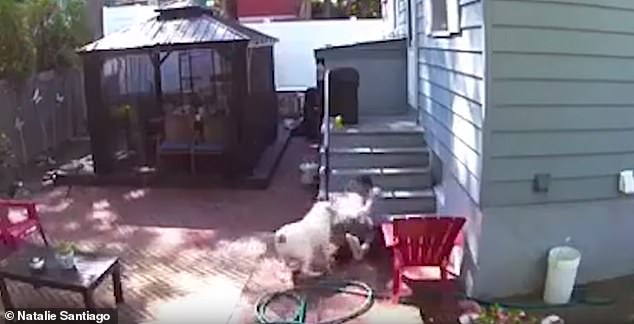 At one point, unbalanced, Santiago falls to the ground allowing the bulldog to make another attempt 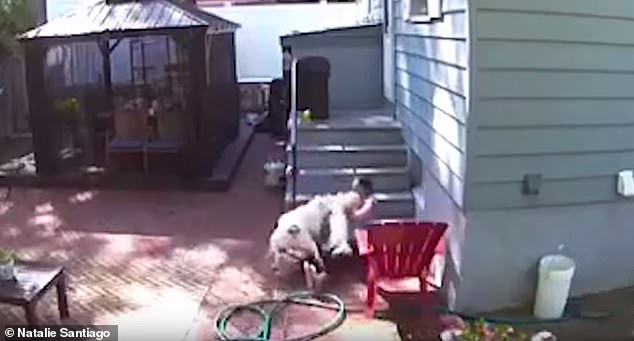 That companion pooch watches as his bulldog partner, still biting down on the smaller canine, follows the woman into the home, where she says she had to struggle to free her pet from its jaws on her own kitchen floor.

At some point the pit bull entered the home, but she was able to lock her own dogs in the bathroom before her son opened the front door to let both of the unwelcome canines out.

Video from a camera pointed at the front yard shows the two dogs running onto the yard as two people show up to corral them.

‘Look at what your dogs did,’ screams Santiago from off camera. They just attacked me and my dogs.’ 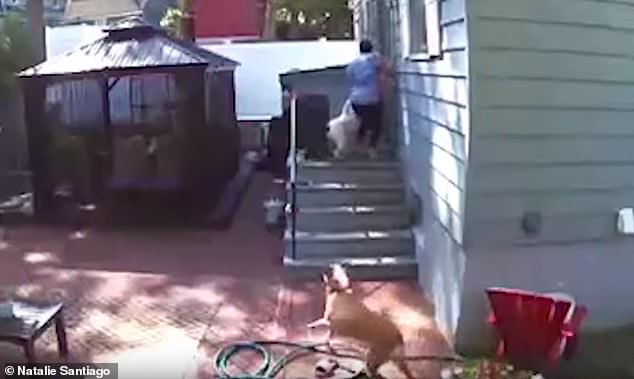 After getting to her feet, the bulldog is still holding onto her puppy as Santiago tries to enter her kitchen door and the pit bull companion arrives in the frame 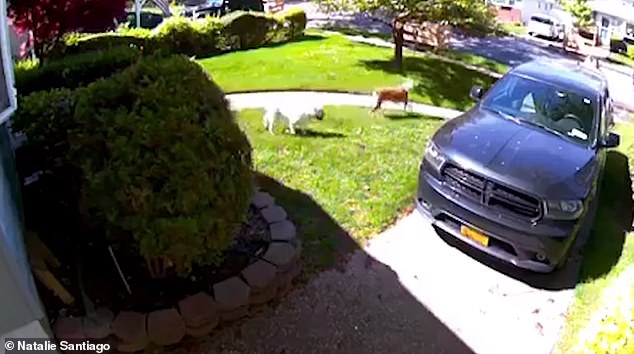 After a struggle inside, the two puppies are locked away safely and the invading duo is let outside through the front door when the owners show up

‘They got loose out of the yard,’ one woman shouts back. The brown one runs back toward the backyard again leading another woman to bring it back to the front.

‘You’ll go nowhere, the cops are coming,’ Santiago yells. ‘That dog attacked me, came into my yard, attacked me. Everybody saw it.’

However, the dog’s owners grab the aggressive pair and left the scene. 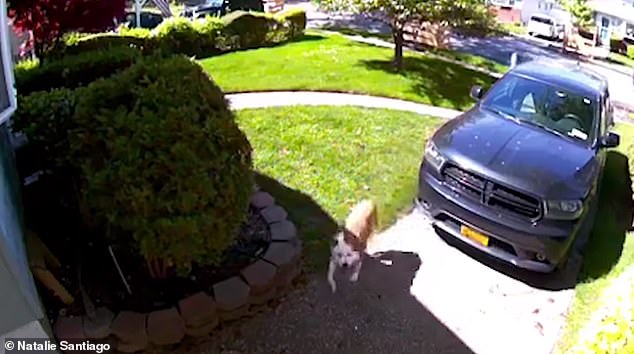 As Santiago is screaming back and forth with the owners, the pit bull takes off again briefly up the driveway 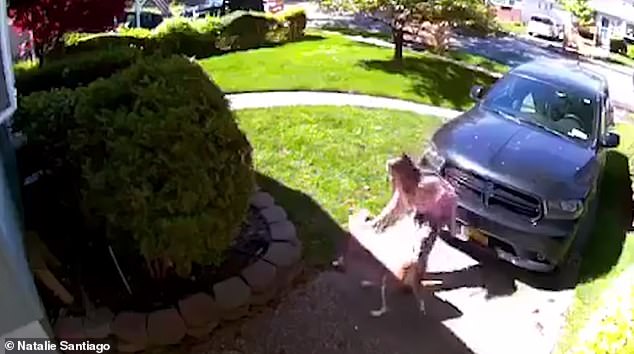 According to the New York City Health Department, the dogs in the video were the same ones who attacked a 75-year-old woman and her poodle on a nearby street on February 25.

The woman in that incident was also able to fight off the dogs until the police arrived, but both she and her dog suffered multiple injuries from bites.

The owners of the belligerent canines reportedly maintain that the claims about either attacks are not true.