A Pakistan International Airlines Airbus A320 passenger plane carrying more than 100 people today crashed into a residential area of Karachi.

Witnesses said the flight from Lahore had made three failed attempts to land at Jinnah International Airport before ploughing into the Model Colony area of the city on a fourth landing attempt.

The pilot also told air traffic control that he had lost one his engines and he made a final mayday call before the crash.

Photos show plumes of billowing smoke after the Pakistan International Airlines plane smashed into the middle class area of Model Colony that is two miles from the airport.

Pictures reveal burning rubble and debris strewn across the area as hospitals ready themselves for a flurry of victims. 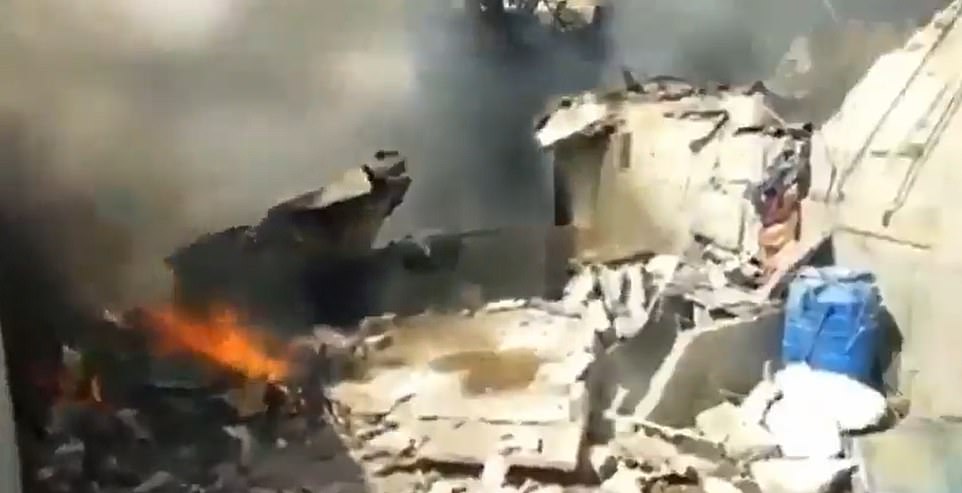 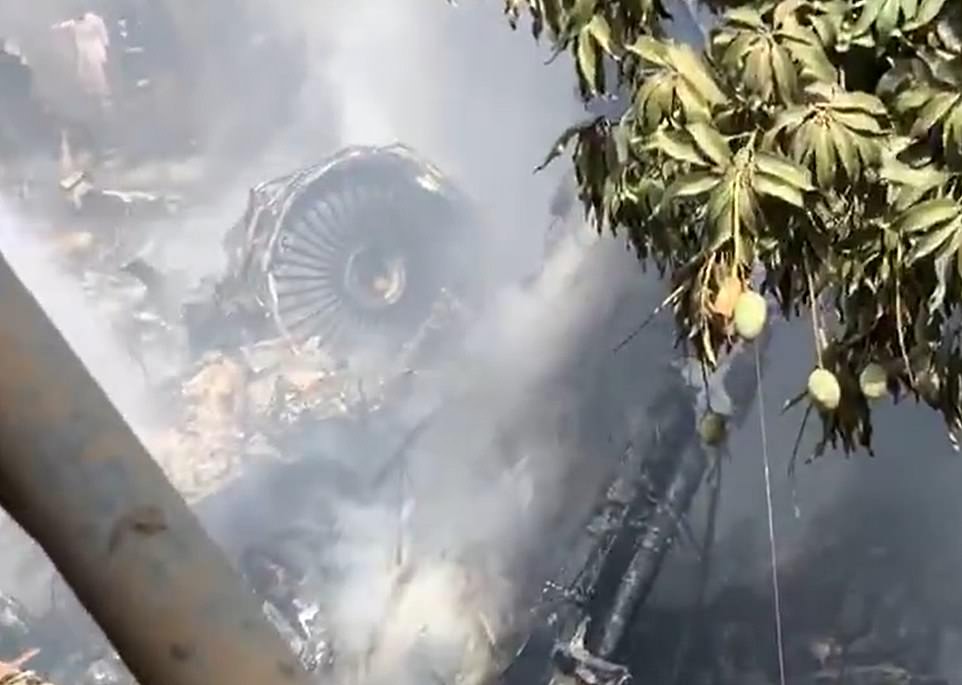 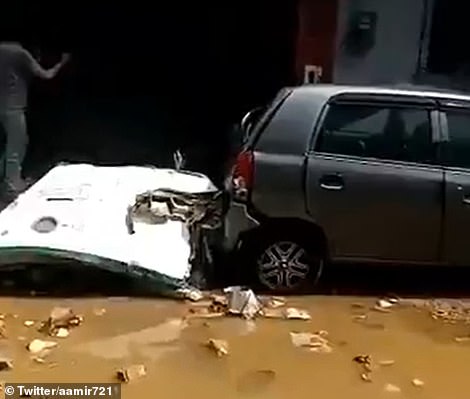 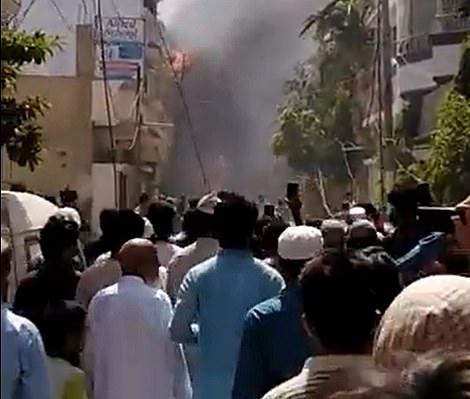 Photos on national television show plumes of billowing smoke after the Pakistan International Airlines plane smashed into the residential area. 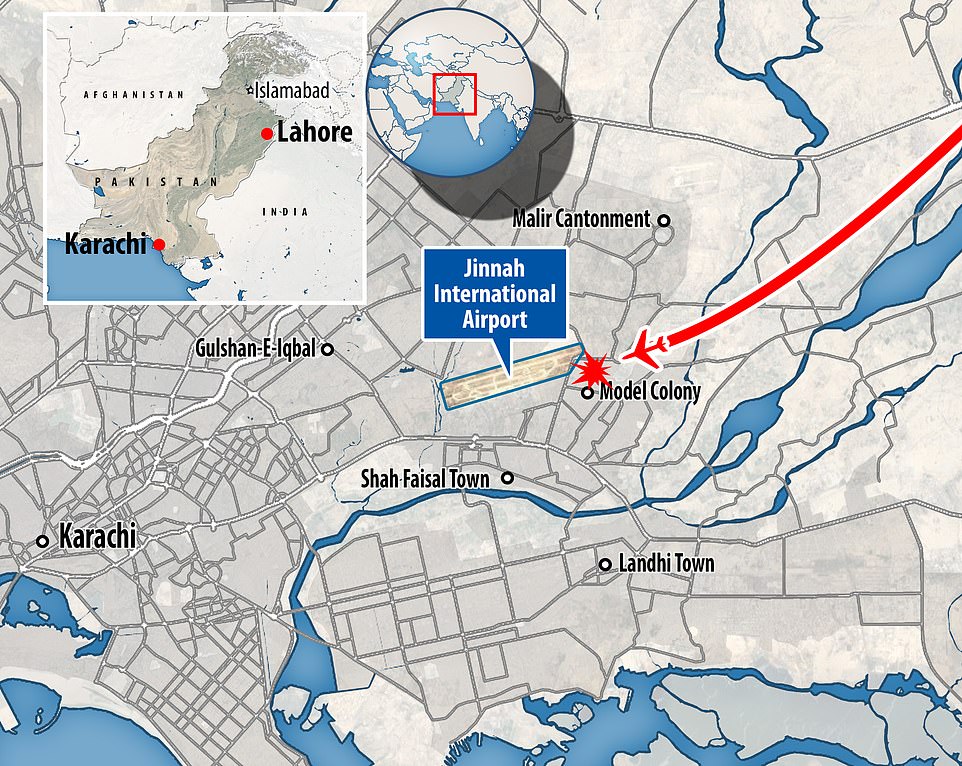 The plane had been flying from Lahor to Jinnah, which usually takes 90 minutes, before it went down in the Model Colony area as it began its final approach to land at Karachi airport 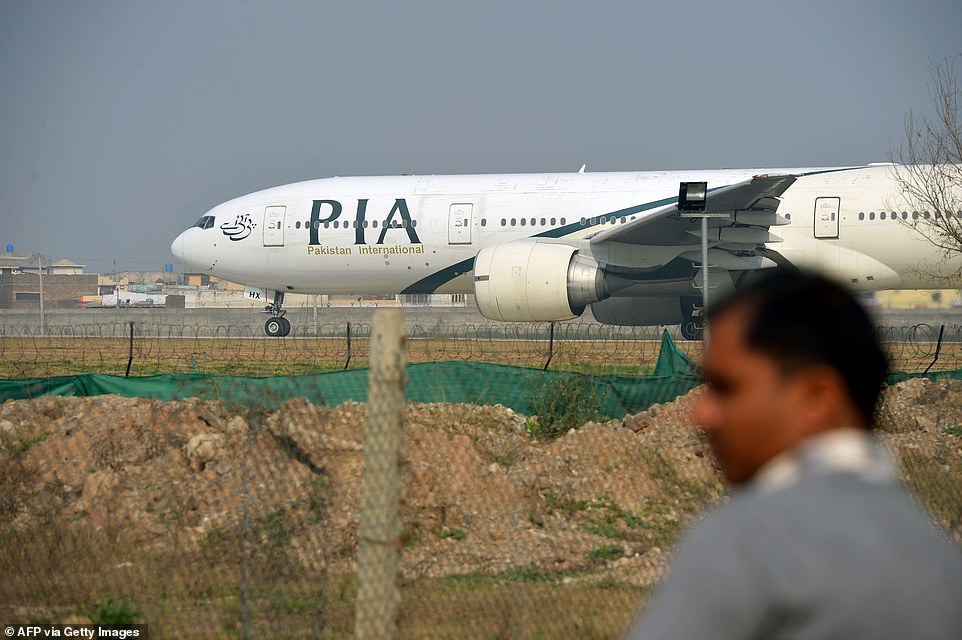 The Airbus A320 operated by state airline Pakistan International had 99 passengers and eight crew were on board. An aircraft of the same model is pictured 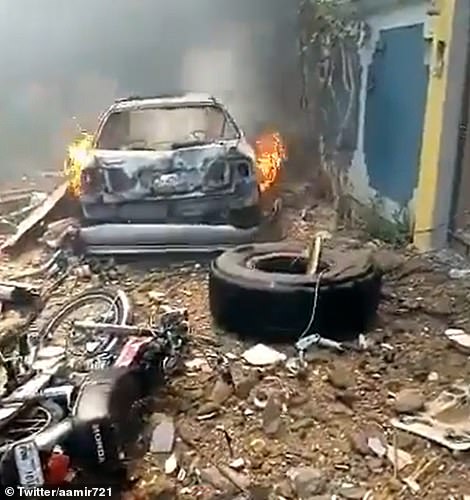 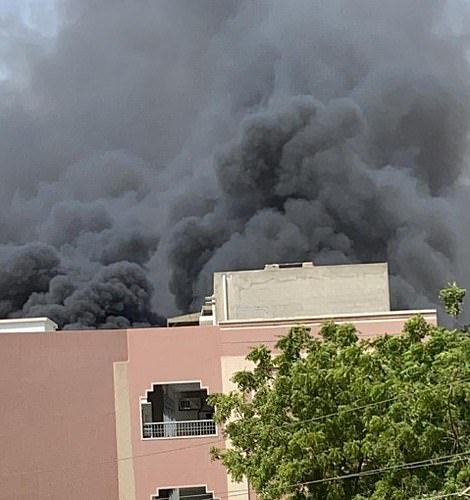 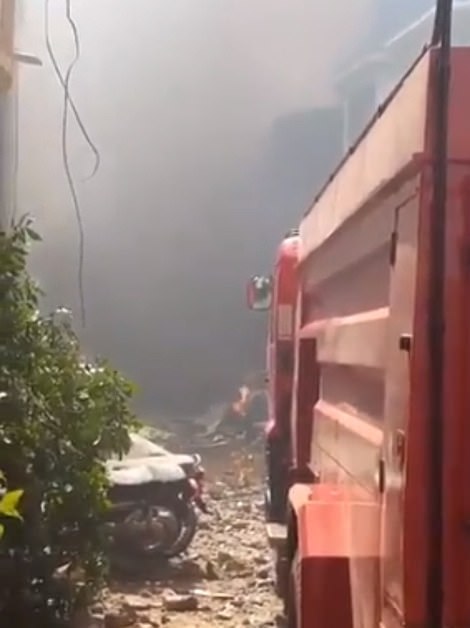 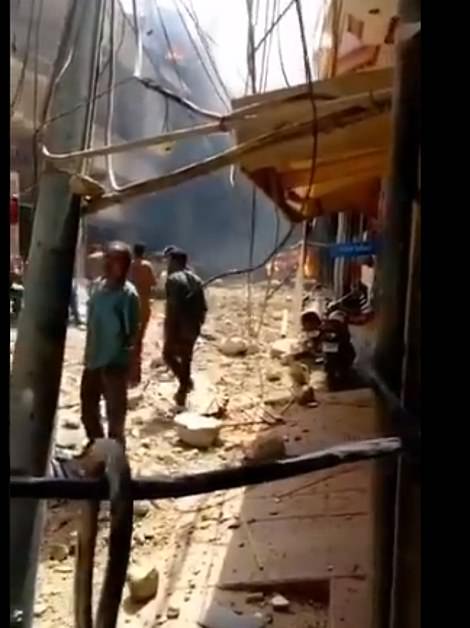 The Airbus had been flying from Lahor to Jinnah, which usually takes 90 minutes, before it went down in the Model Colony area as it began its final approach to land at Karachi airport.

The captain’s devastating final conversation with air traffic control revealed the plane had ‘lost’ an engine before it was cleared to land on a runway as an emergency.

The pilot repeatedly cried ‘mayday’ as he was given permission to land on either runway just seconds before crash.

Civil Aviation Authority (CAA) sources said the captain had reported a technical fault before the plane vanished from the radar.

They told News One that communication with the plane was cut off one minute before it was scheduled to touch down.

Video footage has appeared online that appears to show the aftermath of the crash as panicking residents shout over each other amid plumes of billowing smoke and rubble.

Police have also been spotted blasting water on the charred remains of the aircraft. 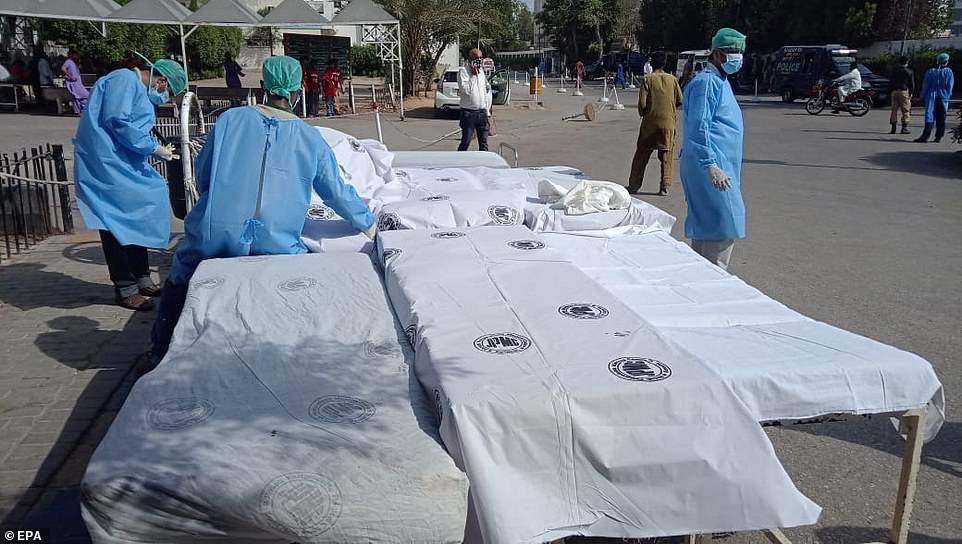 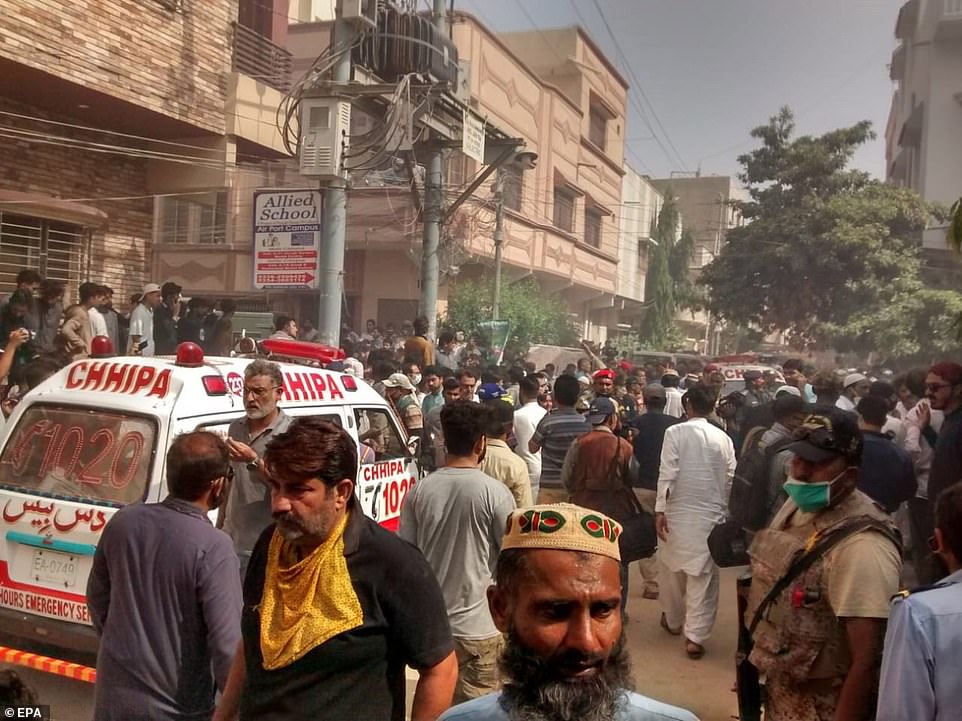 Ambulances arrive at the scene  ready to rush victims to hospital 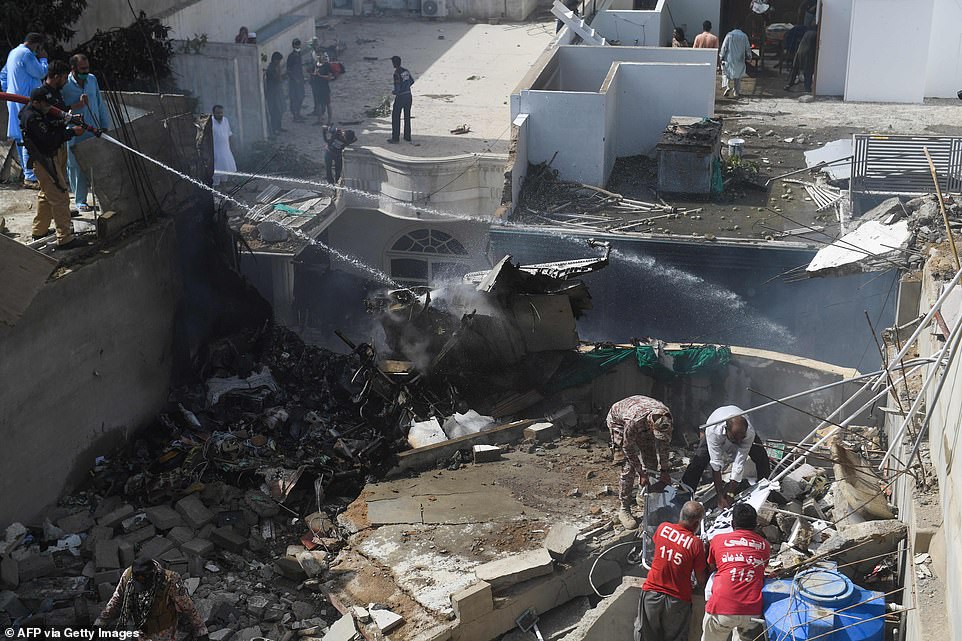 Police have also been spotted blasting water on the charred remains of the aircraft. 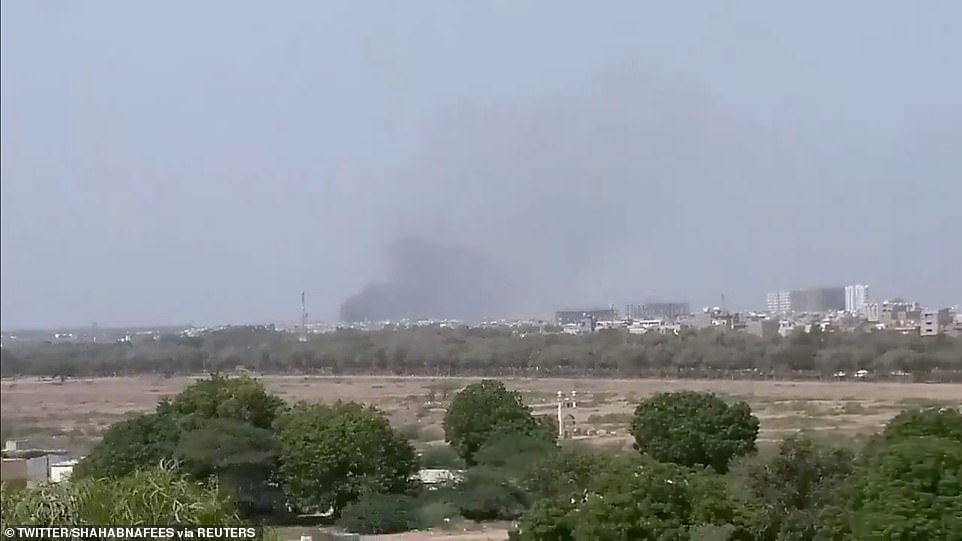 The Pakistan military tweeted that security forces had been deployed to the area and helicopters were being used to survey the damage and help ongoing rescue operations.

Pakistan has a chequered military and civilian aviation safety record, with frequent plane and helicopter crashes over the years.

In 2016, a Pakistan International Airlines plane burst into flames after one of its two turboprop engines failed while flying from the remote northern to Islamabad, killing more than 40 people.

PIA, one of the world’s leading airlines until the 1970s, now suffers from a sinking reputation due to frequent cancellations, delays and financial troubles. It has been involved in numerous controversies over the years, including the jailing of a drunk pilot in Britain in 2013.

The crash comes as Pakistanis across the country are preparing to celebrate the end of Ramadan and the beginning of Eid al-Fitr, with many travelling back to their homes in cities and villages.