Shocking footage exposes the horrific conditions of rabbit farms allegedly used by some of the most famous luxury brands in the world, including Dior and Dolce&Gabbana.

The video has been shot by an animal rights group who went undercover to gain access to three rabbit farms and a slaughter house southwestern France.

It shows hundreds of rabbits being kept in tiny cages with many suffering sores, injuries and birth defects.

Heartbreaking: A newborn rabbit is seen shaking on the metal bars of its mother’s cage 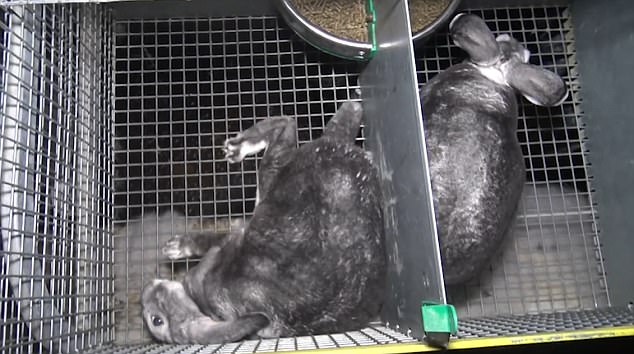 Fending for themselves: The video has been shot at rabbit farms in France reportedly used to source fur for luxury brands, including Dior, D&G, and Fendi 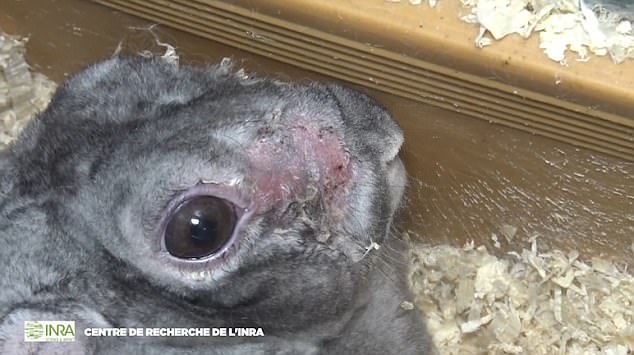 The footage was captured by animal rights group L214, who claims that the farms are used to source rabbit fur for fashion brands Fendi, Dior, and Dolce&Gabbana.

The rabbits are born in the tiny cages, and never see the light of day before they are slaughtered.

The video sees a newborn rabbit, furless and blind, shaking on the floor of the metal cage.

They spend their lives on bare metal bars, meaning that their claws fall in the space between them, causing pain and injury to their paws.

Footage also shows animals with sores on their legs and faces, cramped into barren cages where some step on others to move. 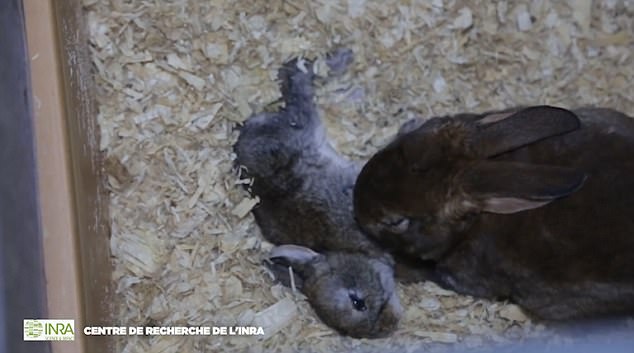 Heartbreaking: A mother bunny licks the fur of her dead young one in one of the tiny pens 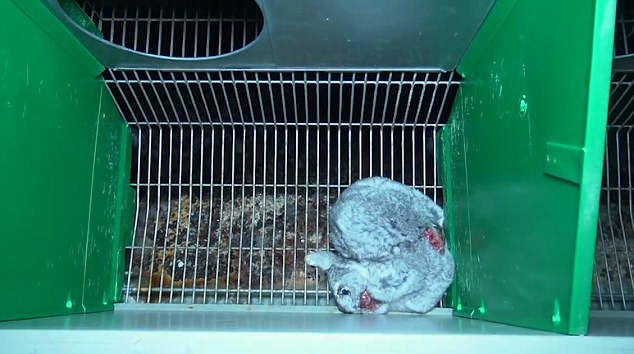 Left to die: The animal rights group claims that as many as one in four rabbits die before they are meant to be slaughtered 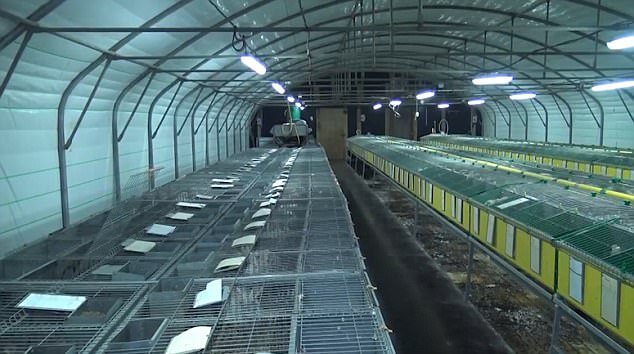 Caged: Footage from one of the rabbit farms where the special breed is bred 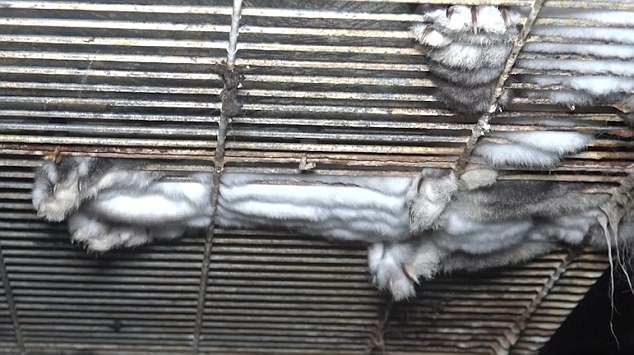 Pain: The cages have no bottom, so the animals’ claws fall between the bars 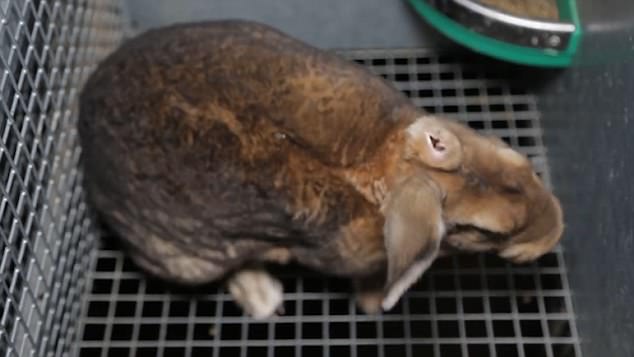 Hurt: One rabbit is seen having lost its ear, as it sits in its tiny cage 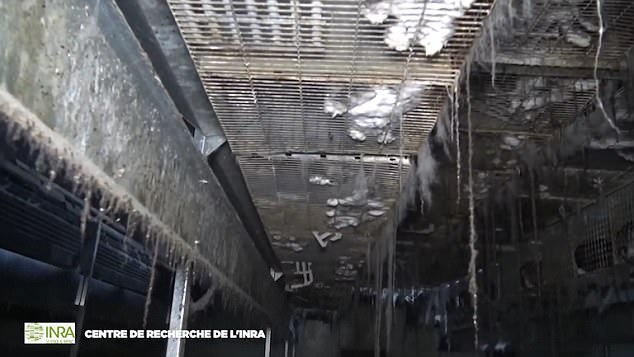 Grime: The underside of the cages show the lack of cleaning routines at the farm

L214 claims that as many as one in four rabbits die in the cages before slaughter.

One heartbreaking sequence appears to show a mother rabbit licking the fur of her dead young.

Footage from the slaughterhouse, showing while albino angoras being prepared for skinning, appears to shed light on flawed practices.

It shows a staff member killing the rabbits by putting their head into a machine, before hanging them by the paws and slicing their throats so they bleed out on a conveyor belt.

Several of the rabbits continue to kick and thrash after their head has been put into the machine and they are hung on the belt.

As with most animals, rabbits’s muscles and organs would remain functioning for a few seconds after brain death and twitching does not have to indicate that they feel any pain.

However the rabbits appear to kick for an uncomfortably long period of time after being euthanised. 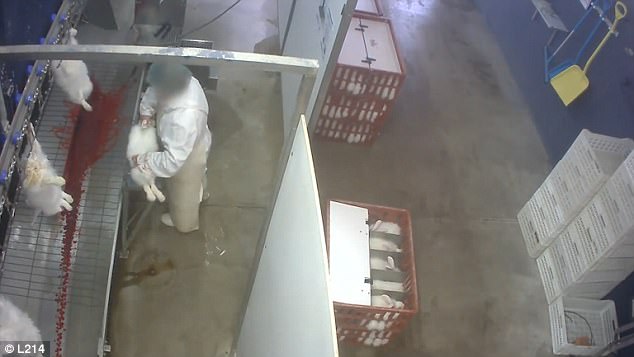 Slaughter: A staff member kills the bunny by placing its head inside a machine 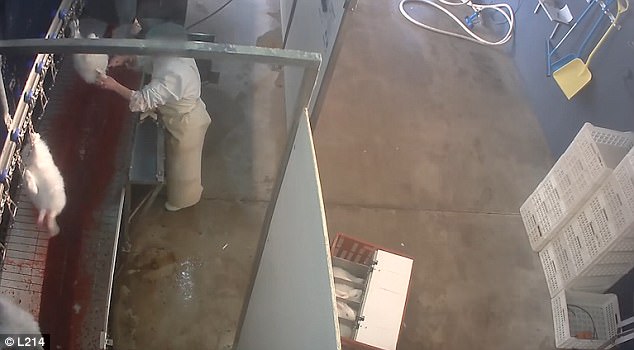 System: The rabbit is then hung up and has its throat slit, but some of the animals are seen twitching uncomfortably long after they are killed 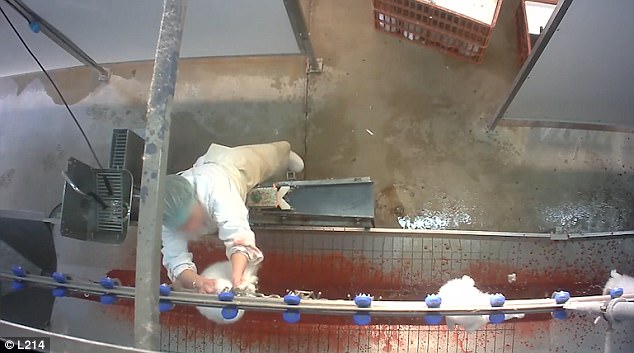 The French National Institute for Agricultural Research (INRA) has promised to conduct ‘an internal inspection mission on site within 48 hours’. If necessary, it guarantees to ‘take the immediate corrective measures that would be required’.

The president of the local cooperative told AFP that he was ‘quite surprised (…) of the way L214 interprets things’.

He said that the particular breed, the Orylag rabbit, are ‘animals that have a certain sensitivity, which are quite fragile and that is why they are given the most comfortable conditions possible to limit mortality and diseases.

‘The Orylag is not a rabbit or a pet (…) it has characteristics of its own.It can not put it outside or outside. When it reaches a certain age it is necessary to put it in individual cage, or they fight, ‘he adds.

Representatives for fashion house LVMH, which includes Fendi and Dior, and Dolce&Gabbana, have been contacted by MailOnline for comment.