Horrors of the ‘Kyiv concentration camps’: Hundreds of kidnapped Ukrainians are forced to dig trenches in villages around the city, human rights group warns

By Andy Jehring For The Daily Mail

Russia has set up a string of concentration camps around Kyiv where they are forcing captured Ukrainians to dig trenches, a human rights group has claimed.

Escaped prisoners and relatives of those still locked up have revealed the horrors unfolding in occupied villages just a few miles north of the capital.

About 500 people are being made to build fortifications for the invading army as well as repair military gear.

The captives are housed in at least five industrial units and basements where troops blindfold them and bind their hands, only feeding them when they have spare food.

Russia has been accused of setting up concentration camps around Kyiv and forcing Ukrainian prisoners to dig trenches by Ukraine’s Media Initiative for Human Rights (Pictured: a Russian camp near Kyiv taken over by Ukrainians, though there is no evidence that this particular one was dug by Ukrainians) 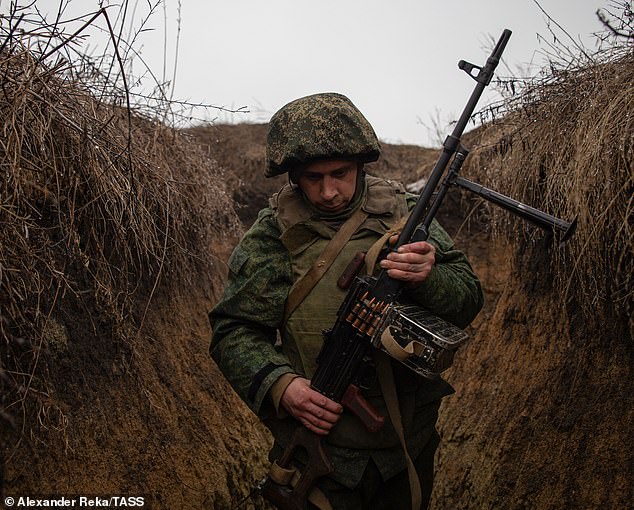 Captives are reportedly kept in five industrial units and basements while blindfold and bound, rarely being fed (pictured: serviceman of the People’s Militia of the Lugansk People’s Republic)

It has previously been claimed that more than 20,000 civilians in Mariupol had been shipped to labour camps in Russia. But nobody knew of the existence of such facilities in Ukraine itself. Pictures show the extensive First World War-style trenches the Russian army has dug around Kyiv in recent weeks which are now feared to have been made by the prisoners. Victims report being threatened with violence if they do not do as they are told, says a report by Ukraine’s Media Initiative for Human Rights. ‘We were only fed when the orcs [guards] had some food,’ said an escaped prisoner. ‘They gave us water from the heating system. Some of us were forced to dig trenches.’

The mother of another victim discovered her son had been taken to Hostomel ‘to work’. An escaped hostage told her they were taken there for two days and her son was left with injuries to his hand. He has been missing for three weeks.

Troops have allegedly been scrolling through the phones of those in occupied territory to find excuses to accuse them of working for the Ukrainian military and arrest them.

It comes after claims that locals had sent pictures and videos of Russian forces to friends in Kyiv which have triggered counter-strikes. 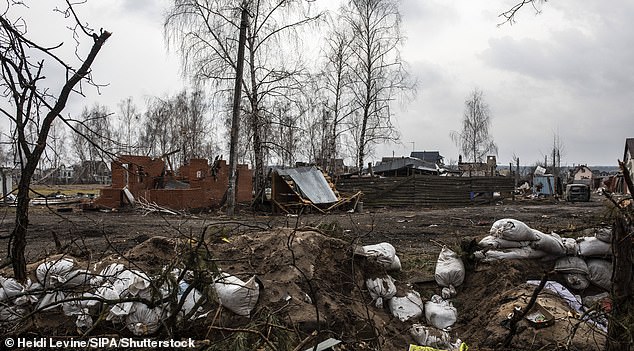 ‘The Russians came for our youngest son first,’ said Olena, another witness. ‘He had a photo on his phone of something burning. They attacked him, threatened him with machine guns. Then my eldest came out and they turned on him. They saw a photo of the dam on his phone. He explained he works there, but they took him away anyway.

They have not seen him since after fleeing the village of Kozarovichi over fears for their youngest.

Testimonies from dozens of victims and relatives have been able to pinpoint where the camps are located. Sites include a plastic window factory, an abandoned radio engineering plant and a textiles firm in Dymer, 30 miles north of Kyiv. More are believed to be ten miles further south in the village of Sinyak while others are held at a glass factory in Hostomel – close to the suburb of Irpin which was retaken by Ukraine this week.

The invading army started taking mostly men as prisoners from the very first day of the invasion and have been putting them to work.

Taking civilians as hostages is illegal under the Geneva Convention.

‘The military of the opposing parties is forbidden to detain the civilian population without any grounds,’ said Ukrainian lawyer Vitaliy Hekal. ‘Those who do not bear arms and do not identify themselves as members of the armed forces of the opposing party are considered civilian.’