Horse racing bosses say they are confident that prompt action and ‘war-room’ of vets can stop equine flu shutting the sport down for months, as it emerged today that three more animals have been diagnosed.

The British Horseracing Authority made the decision to cancel all of Thursday’s racing cards on Wednesday night, after the Animal Health Trust confirmed the three positive tests from vaccinated horses in an active racing yard – prompting fears that the virus could stop all racing for up to six months.

The shutdown, which comes just five weeks before the world-famous Cheltenham Festival,  is the biggest loss of fixtures for non-weather related reasons since 2001, when a foot and mouth disease breakout close to the course saw Cheltenham cancelled and the industry lose millions of pounds.

And it emerged this afternoon that three more horses from Grand National-winning trainer Donald McCain’s Cheshire yard, where the alarm was first raised, have now tested positive.

One of them is Raise A Spark, who ran at Ayr on Wednesday, the BHA announced.

That  takes the total number of cases to six at Mr McCain’s Bankhouse Stables, while a ‘separate suspicious case’, which has not yet been confirmed as a positive sample, has also been identified at another yard.  There are no known links between the two stables.

McCain’s Raise A Spark (file photo) has been named as having tested positive for equine influenza, one of six to be diagnosed from Grand National-winning trainer Donald McCain’s Cheshire yard 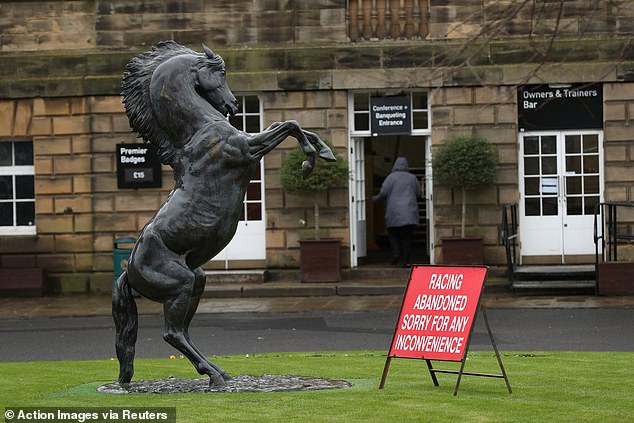 In a statement this afternoon, the BHA said  of Raise A Spark: ‘The test on this runner relates to a sample taken the following day, and the horse showed no clinical symptoms on raceday.

‘It was in anticipation of this risk that the decision was taken by the BHA to restrict movement of horses on a precautionary basis at the yards of 120 other trainers who competed at these fixtures, and to suspend racing until Wednesday at the earliest.

‘This action was taken to mitigate the impact of any of the runners which competed at these fixtures being found to be infected by the virus.

‘Testing of horses at the 120 yards which have been put on hold is continuing on an ongoing basis. No further positive samples have been reported as yet.’

But the statement added: ‘However, a separate suspicious case – which has not yet been confirmed as a positive sample – has been identified at another yard. 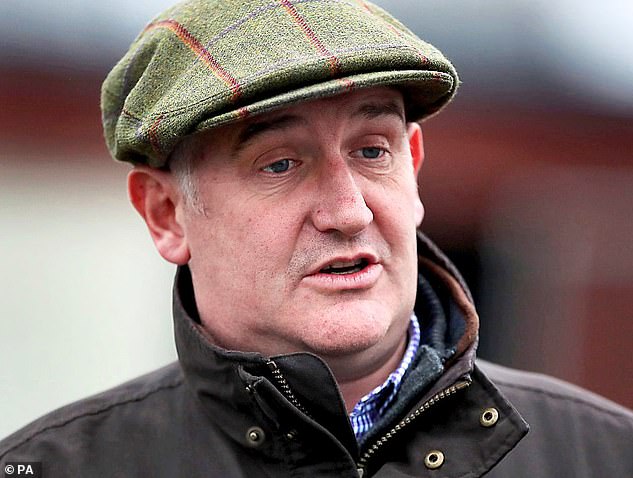 It emerged this afternoon that three more horses from Grand National-winning trainer Donald McCain’s Cheshire yard, where the alarm was first raised, have now tested positive – bringing the total to six 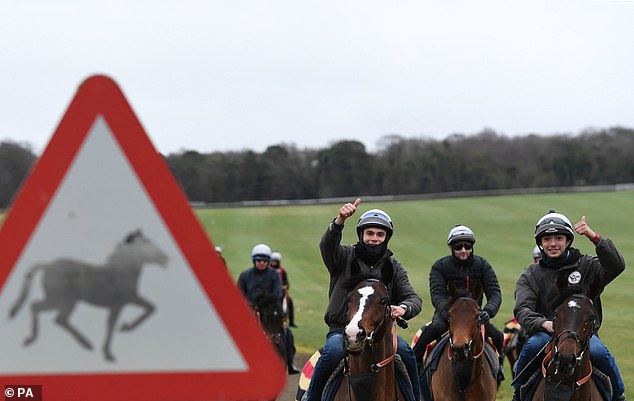 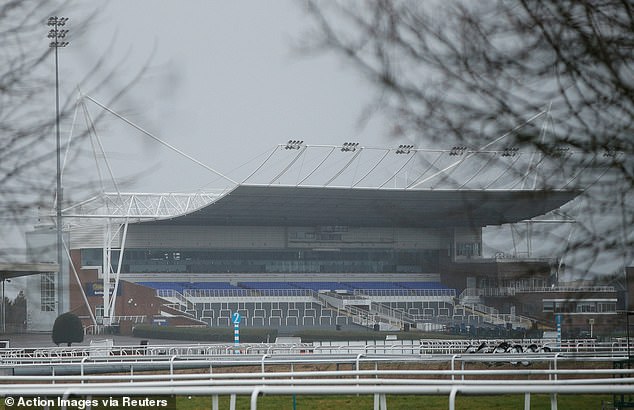 ‘No links have been identified between this yard and the original yard.

The BHA said it was working closely with the Animal Health Trust ‘in order to manage the logistical challenge of providing sufficient swabs and handling the volume of tests being sent through the facility, considering that testing of a total of 174 yards is now taking place’.

It added: ‘It will not be possible to test every horse from every yard before the end of the weekend, but we will work with trainers to identify any priority or risk horses and ensure that they are tested.

‘This will all form part of the picture that is built in order to assist the decisions that will be made on Monday.’

BHA chief executive Nick Rust earlier warned that a ‘three to six-month problem’ might have become reality if the national governing body had chosen to ‘play Russian roulette’ with its response to the outbreak.

Speaking on ITV’s Good Morning Britain, Rust said: ‘We’ve got to get a hold of it quickly.

‘If we play Russian roulette with the evidence we’ve got, we could have a problem for three to six months – and no one would thank us for that.’

Rust added that a ‘war room’ of 20 vets has been assembled by the BHA to determine the scale of the problem and figure out a next step. 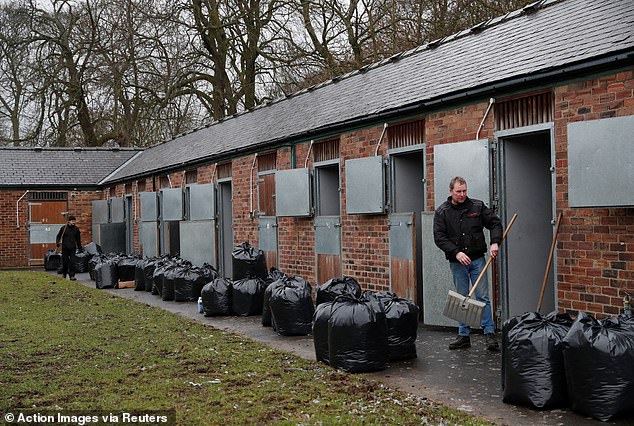 Thursday’s cancellations come less than five weeks before the start of this year’s Cheltenham Festival – the annual highlight of the National Hunt calendar – while Wolverhampton, due to host all-weather raceson Saturday, has announced they will not go ahead.

Champion trainer Nicky Henderson admitted that the potential outbreak has left him feeling ‘nervous’ as the BHA work to identify other yards that could potentially have the virus.

‘This is very, very virulent – so it doesn’t matter how much pains you go to to keep these things at bay, it is very dangerous.’

Like all his fellow Cheltenham hopefuls, Henderson is wary of time running short, with the Gold Cup just five weeks away.

‘The worst part of it is that we are starting to miss races that were part of the horses’ preparation,’ he added.

‘Some of ours aren’t going to run again before Cheltenham – some of them, I hoped to run again.

‘We’re just going to have to pray it will all go ahead as normal, and this will blow over as quick as it’s come in.’

A call is set to be made on Monday over a possible resumption of racing dependent on the outcome of tests on racehorses around the country. 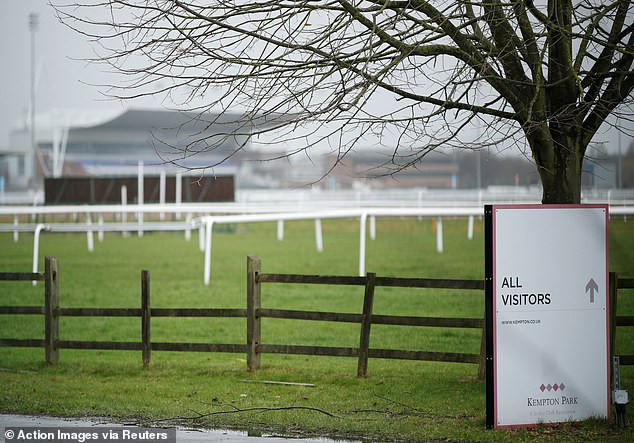 Pictured: Kempton Park Racecourse. A high-profile weekend of racing has already been lost because of the flu, it saw tomorrow’s Newbury races cancelled

Rust said: ‘We hope we’ve got a hold of it quickly and that by Monday we’ll be in a position to make another call.

‘I don’t know if that will need a few more days or not. But I strongly believe this is a few weeks at most, because we’ve acted quickly.’

A high-profile weekend of racing has already been lost, with Gold Cup winner Native River among those who had been due to warm up at Newbury for this year’s Cheltenham challenge.

But Rust confirmed potential Festival prep races will either be re-scheduled or other suitable ones added to the calendar, once the sport resumes.

A BHA statement said that: ‘The full extent of potential exposure is unknown, and we are working quickly to understand as much as we can to assist our decision-making.’

Wolverhampton issued an update via Twitter, announcing this weekend’s card will not take place but despite this, racing went ahead in Ireland at Thurles yesterday.

Equine influenza is a highly infectious disease of horses, mules and donkeys. Symptoms in non-immune animals include high fever, coughing and nasal discharge.

The breakout is estimated to cst up to £100 million, according to bettingexpert.com.

A spokesman said: ‘Confirmation that racing won’t resume until Wednesday means the entire industry including betting, hospitality and ticketing could be facing turnover losses of up to £100 million.

‘Among the casualties are Newbury’s ‘Super Saturday’ – a key trial day for Cheltenham and usually one of the busiest betting days of the calendar year to date, featuring Cheltenham Gold Cup favourites Native River and Clan Des Obeaux.

‘The cancellation of that meeting alone could deprive the betting industry of up to £20 million in lost turnover and it looks unlikely punters switch their interest to racing from Ireland or further afield.’

Equine flu: What is it, and are humans at risk?

Could the flu be fatal and what are the symptoms?

The disease may be serious in unvaccinated horses, although symptoms in vaccinated horses are usually mild and transient. Symptoms may include a raised temperature, a cough and nasal discharge, it is highly contagious.

What is the treatment for infected horses and how long does it last?

Much the same as for human flu. Rest, and other medications for symptoms as needed.  In vaccinated horses, typically 24-48 hours, if a horse is unvaccinated, it can range between 2 – 10 days.

Is there any risk to human health from the equine influenza virus?

There is no known human health risk associated with the virus.

How did the virus arrive in this country and how has it spread?

The British Horseracing Authority (BHA) believes there is a link between this outbreak and other recent outbreaks elsewhere in Europe.

What steps has the BHA taken since being informed of the outbreak yesterday?

All races have been called off, and some Irish horses have also been stopped from returning home after racing in Britain on February 6. Restrictions are in place on horses from yards likely to have been in contact with horses from affected yards.

What is the advice to people working with racehorses?

The BHA has advised those working with racehorses should be vigilant and alert to possible clinical signs. They should put increased biosecurity measures in place – as a minimum, hand washing and change of clothes should be required on arrival at any yard.

When will the ban on racing be lifted?

The BHA says it will issue a further update on racing fixtures as soon as possible.