BREAKING NEWS: Horse racing legend Frankie Dettori announces he will retire at the end of the 2023

Frankie Dettori has announced he will retire from the saddle at the end of 2023.

The Italian, 52, has enjoyed a glittering career, but on a blank day of racing in Britain and Ireland he confirmed on ITV Racing that next year will be his last.

He said: ‘Next year, 2023, will be my final professional year as a jockey.

‘I will break the news now. It is something I have been thinking about for a while and what an appropriate day to tell the racing world that it is going to be my finale next year.’

Dettori’s 35-year career has already seen him ride over 3,000 winners, including all seven on Champions Day at Ascot in 1996.

The jockey admitted it was a tough decision and one taken after consulting his family as he continued: ‘I spoke to dad at length, he stopped at 51. He was very supportive. My wife and children were delighted because they didn’t see me for 33 years! 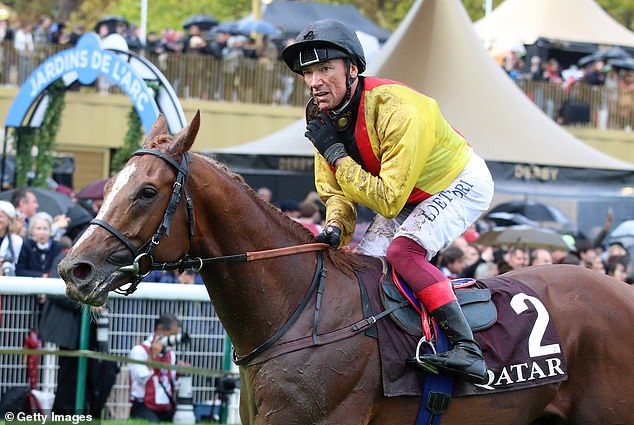 ‘I hope I can finish my career on a big note and in one piece.’

He explained the decision by referencing another sporting great at the latter end of his career, as he said: ‘I am not making comparisons but look at [Cristiano] Ronaldo. He was playing one minute and he was on the bench next. I don’t want to end up like that.

‘I don’t want to be struggling to ride in the big races. I still have good horses to ride and I want to finish it like that.

‘It is going to be emotionally draining but I am looking at it in a positive way and make it a celebration.’