Be careful of the long face when you’re around a horse.

The intelligent animals remember grumpy people and avoid them if they meet them at a later date, according to new research.

Horses are so in tune with human emotion that they can detect, and remember,  subtle changes in the facial expressions of humans, the study found.

Horses remember grumpy people from a picture and avoid them in real-life. They are so in tune with human emotions that they can detect subtle changes in facial expressions and try and avoid the person

The researchers from Portsmouth University and the University of Sussex showed photographs of humans making angry or happy faces to the creatures.

The horses reacted differently in the real-life meetings if they had been shown an angry picture of the person several hours before.

Professor Karen McComb from the University of Sussex said: ‘What we’ve found is not only that horses can read human facial expressions, but they can also remember a person’s previous emotional state in later meetings.

‘Crucially, we have found that the horses adapt their behaviour accordingly.

‘Essentially, horses have a memory for emotion.’

This level of familiarity and recognition has never been demonstrated before.

Dr Leanne Proops, from the University of Portsmouth, said: ‘We know horses are socially intelligent animals, but this is the first time any mammal has been shown to have this particular ability of remembering emotion.

‘What’s very striking is that this happened after the horses just briefly viewed a photograph of the person – they did not have to have a strongly positive or negative experience with the person to react differently.’ 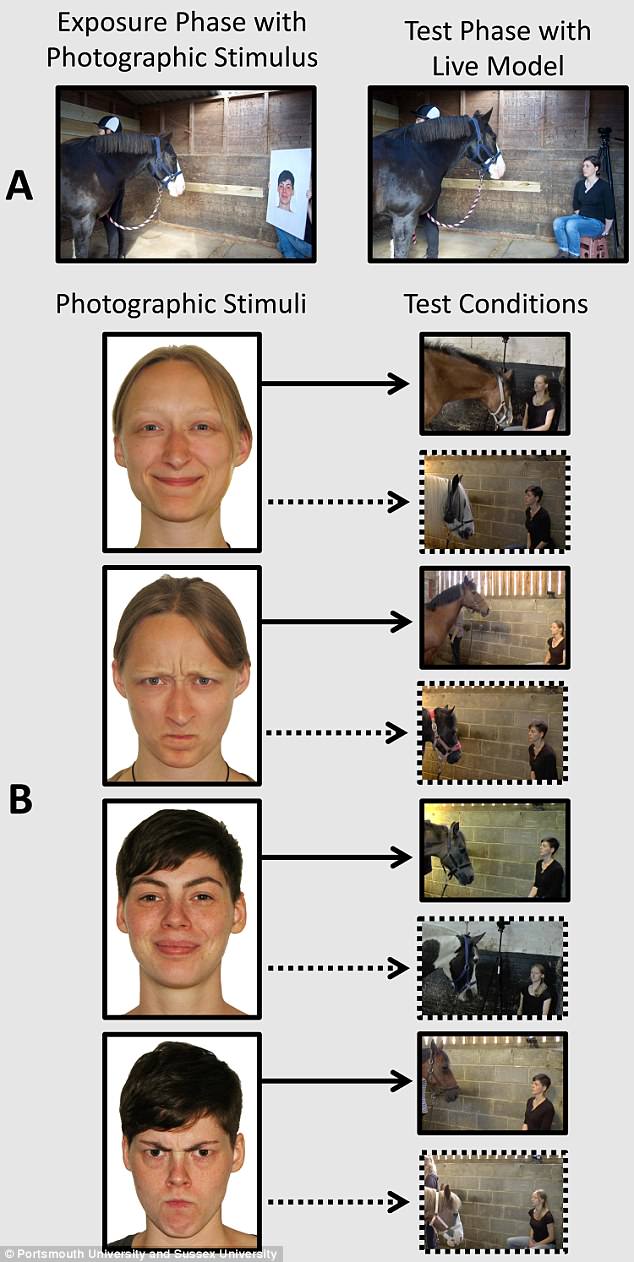 Animal behaviour specialists found that the horses exposed to an angry person’s picture turned their left eye to them in the real world meeting. The left eye in equines delivers information to the area of the brain which processes threatening stimuli

Scientists led individual horses into a stable and showed them either a happy or angry photo of a human.

Several hours later, the horse was returned to the stable where they met with the same person, but this time face-to-face.

The human behaved completely neutrally in the face-to-face meeting, unaware of which facial expression photo had been shown to the horse.

Animal behaviour specialists found that the horses exposed to an angry person’s picture turned their left eye to them in the real world meeting.

This is a key sign when dealing with the complex brains of the smart animals.

The left eye in equines delivers information to the area of the brain which processes threatening stimuli, helping the horse to avoid aggression.

A group of 48 domesticated horses were used in the study, and two people, unfamiliar to the horses, modeled for the photographs.

Half of the horses were shown happy faces, and half were shown angry.

HOW DID HORSE HOOVES EVOLVE?

The story of how the horse lost its toes begins millions of years ago when they moved from living in protected forests to open grassland, according to Harvard University researchers.

At that time an ancient horse would have moved relatively slowly with a small body, short legs, three toes on its front feet and four toes on its back legs.

But its new exposed environment may have forced the creatures to develop longer legs to run from predators and become larger to make them harder to eat.

It is the loss of toes which may have enabled horses to support this larger weight and move faster on their longer legs.

A single hoof better supports a horse’s weight and allows it to swing its legs more efficiently to gallop at a much greater speed, Harvard found by scanning 12 fossils.

Horses are the only creature in the animal kingdom to have a single toe, the hoof, which fully evolved around five million years ago.