This is the heartwarming moment nurses perform an impromptu dance routine for a ballet-obsessed girl battling cancer.

Five-year-old Isobel Fletcher left beaming with joy after kind-hearted staff members pulled out their best moves to cheer her up. 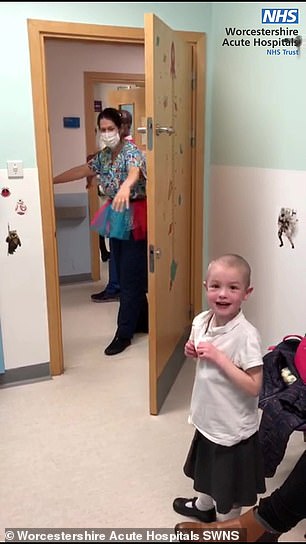 The video, taken on October 23, shows the schoolgirl giggling at the pair attempt to spin and pirouette to the Swan Lake theme music.

The enthusiastic youngster said: ‘I can actually do a pirouette on one leg,’ and spins round to show them how it’s done.

Emma, who is senior play specialist, tries to do the same but gets stuck, laughing: ‘I’ve got sticky shoes!’

She then joked that she was taking her shoes off, saying: ‘I’m not having Baylon do better,’ before the pair continued their synchronized routine. 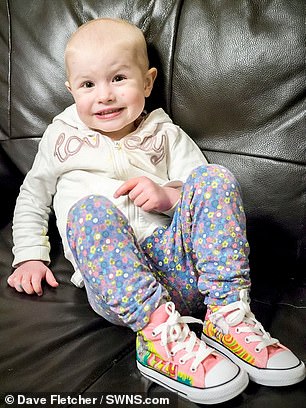 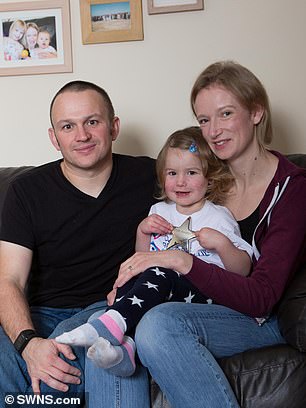 Isobel (pictured left) was diagnosed with acute lymphoblastic leukaemia in January 2017 after parents Dave and Vicky found spots appearing on her skin (pictured together, right)

The pair perform various ballet positions to the beaming girl, who giggles along throughout the performance.

Emma wanted to surprise Isobel with the routine and enlisted the help of consultant paediatrician Dr Kamalarajan.

The ballet-mad youngster is currently undergoing chemotherapy treatment for acute lymphoblastic leukaemia after she relapsed earlier this year.

The video of the pair’s routine has went viral after it was shared online and has got 21.9k views since it was posted on October 26.

The hospital wrote: ‘When Ballet-mad Izzy came into our Children’s Clinic for her cancer treatment, two of the team surprised her with a very special routine.

‘Huge thanks to Baylon & Emma for the lovely surprise, and well done Izzy for *literally* keeping them on their toes!’

Isobel, of Worcester, had previously completed two years of treatment in May 2019 after she was originally diagnosed in May 2017.

Dawn Forbes, the children and young people’s oncology nurse at the cancer unit at the hospital, said: ‘Izzy is a delightful little girl and is taking everything in her stride.

‘We thought it would be a nice way to cheer up. She always has ballet books with her and brings them in to read during her treatment. 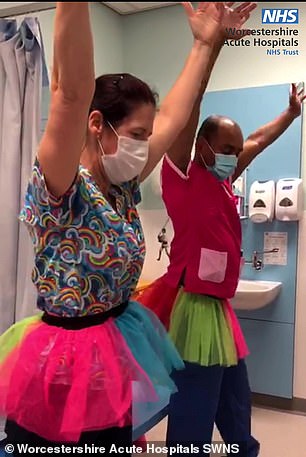 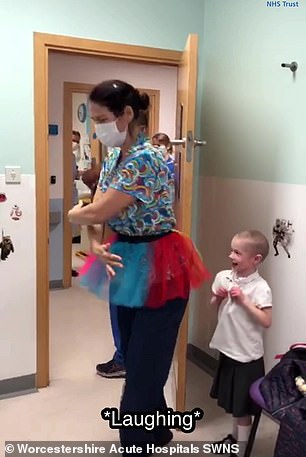 The video, taken on October 23 at Worcestershire Royal Hospital, shows the schoolgirl giggling at the pair attempt to spin and pirouette to the Swan Lake theme music

‘She was in to have a dressing changed last week, which can be quite an anxious for a child, so we thought it would help relax her a little.

‘They both did a very good job, they showed some impressive moves. They only had a quick two minute chat outside the room before coming up with the routine.’

Isobel was diagnosed with acute lymphoblastic leukaemia in January 2017 – three days before her second birthday.

Parents Dave and Vicky found out she had cancer after a cute photograph of her falling asleep in a swing turned out to be a symptom of the disease.

Spots appeared on her skin on a Thursday night, and by the Saturday, Izzy had been diagnosed with leukaemia.

Dad Dave, 41, an auditor, said previously: ‘She has grown up very quickly and been subjected to medicine she doesn’t like but has taken everything in her stride so far.’