The Chinese authority has reportedly suspended two hospital workers after a pregnant woman committed suicide during labour because she couldn’t have a Caesarean section.

In a case that shocked the Chinese public, the expectant mother, named Ma Rongrong, allegedly jumped from the hospital’s fifth-floor window on August 31 because she couldn’t bear the pain anymore.

The hospital reportedly denied her a C-section, an operation known to carry many risks. But doctors said the woman’s family turned down the opportunity to relieve her of the pain.

A special investigation team announced today that the person in charge of the hospital in Yulin city, Shaanxi Province, and its head gynaecologist had been removed from their positions, according to People’s Daily Online. 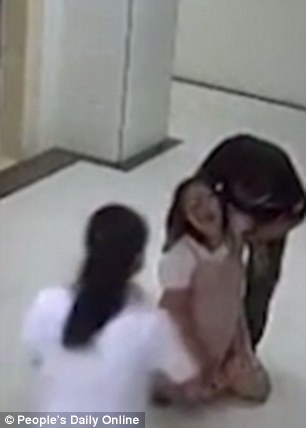 Earlier reports claimed that Ms Ma, said to be 26 years old, was experiencing strong contractions before the incident took place at the Yulin No.1 Hospital.

She was said to be 42 weeks pregnant and admitted to the hospital on August 30. She reportedly committed suicide around 8pm on August 31.

The footage showed the pregnant woman leaving the labour room to find her family. 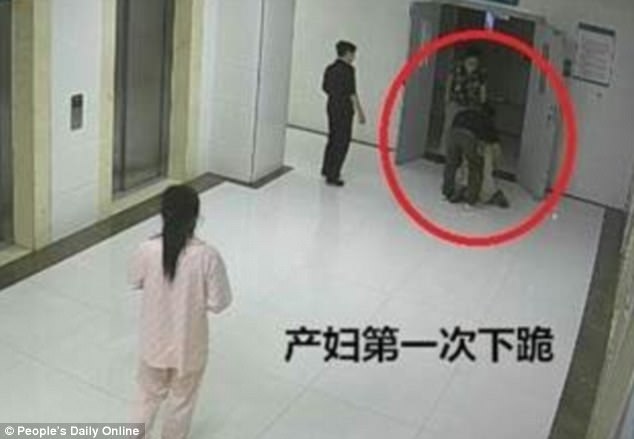 The woman can be seen in great agony in the video and kneeling on the ground on two occasions when her family and a nurse attended to her.

At first, media reports claimed that she was kneeling in front of her family members to beg them to give permission to the doctors, so she could have the C-section.

In China, doctors would only carry out major operations after receiving a written consent from the patient’s next of kin.

Accounts claimed that Ms Ma’s family refused to give the doctors a consent for unspecified reasons, leading to Ms Ma’s suicide.

The hospital also claimed they had informed Ms Ma’s family a natural birth could be risky for Ms Ma because of the baby’s ‘large head’, according to a previous report fro the People’s Daily Online. 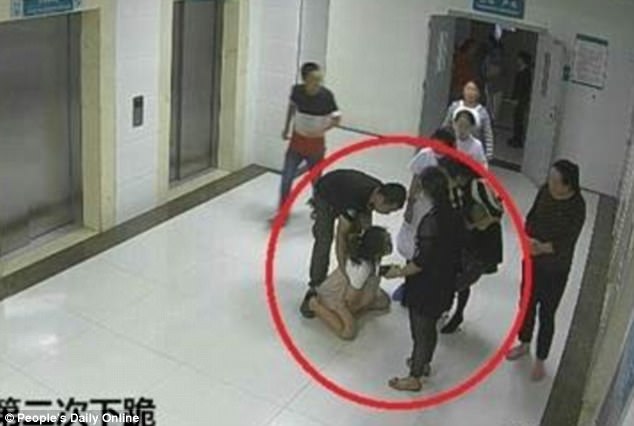 Ms Ma is seen kneeling on the ground in front of her family and a nurse. Earlier reports claimed she was begging her family to agree to the C-section, but her husband said she knelt on the ground because she could not bear the pain

However, Yan Zhuangzhuang, Ms Ma’s husband, has released a statement since the incident became headlines across Chinese media and his family got criticised by the public.

Mr Yan, 29, claimed that doctors at the Yulin No. 1 Hospital had denied his late wife a C-section at the last minute.

He also claimed that in the footage his late wife was kneeling on the ground because she could not bear the pain.

According to the hospital, Ms Ma’s family and the hospital have settled on the matter, reported Huanqiu.com, an affiliation to People’s Daily.

The two sides were said to have agreed on financial compensation on the term that the family members do not accept media interviews anymore, but the hospital did not reveal the amount of the payout. 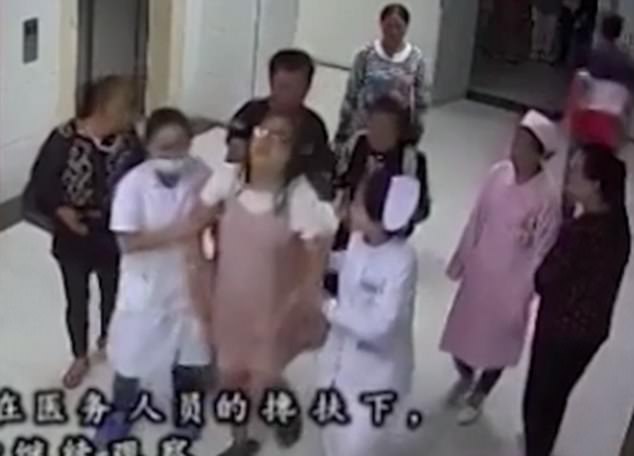 Ms Ma was helped by nurses to go back to the labour room and wait for a natural birth, said various reports. Two hospital workers (not pictured) have been suspended 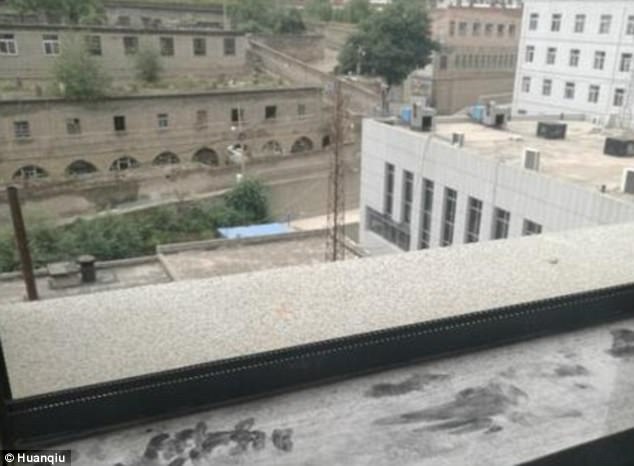 The investigation team, set up by the Yulin Health Bureau, didn’t explained how Ms Ma’s request for a C-section had been denied in their statement today.

The investigation team said they recognised the hospital had taken all the necessary steps in dealing with Ms Ma’s childbirth, including informing family members.

The team said they had decided to suspend the two workers because the hospital had not provided ‘enough humanitarian care to the pregnant woman’, and that it reflected the lack of management of the hospital.

The statement also claimed that the hospital had not got enough staff to respond to emergency matters.

The hospital has been ordered to rectify the existing problems immediately.

For confidential support, call the Samaritans on 116123, visit a local branch or go to www.samaritans.org.