A host of bosses at crisis-hit airlines, hotels and retailers have quietly hiked their pay after taking Covid salary cuts earlier in the pandemic, The Mail on Sunday can reveal.

Bosses at all the major housebuilders, which are benefiting from a state-funded stamp duty holiday, are also back on full pay.

Other executives to return to full pay after a cut include bosses at BT, JD Sports and advertising group WPP.

Lundgren agreed to cut his £740,000 a year income by 20 per cent for three months from April to June to save funds while easyJet’s fleet was grounded.

But his pay reverted back when the budget carrier returned some of its planes to the skies, even though the company has remained in the grip of a major crisis.

Last week, easyJet admitted it is on course to make its first annual loss with just a fraction of its normal fleet in the air due to Covid travel bans and quarantine rules.

The company is also cutting thousands of jobs in response to the pandemic and closing bases at Stansted, Southend and Newcastle. It also received taxpayer support through the furlough scheme.

Lundgren’s pay boost stands in contrast to his peers at Virgin Atlantic, British Airways and Ryanair.

Virgin chief Shai Weiss cut his salary by 20 per cent for an initial three months before extending it to the end of the year. Alex Cruz, the head of British Airways, went for ‘several’ months on no pay and has now agreed a 33 per cent cut to his £805,000 annual salary. Ryanair chief Michael O’Leary agreed to halve his pay for the year.

EasyJet’s founder and largest shareholder Sir Stelios Haji-Ioannou last night hit out at Lundgren, telling The Mail on Sunday: ‘It is a disgrace that the scoundrels are back on full pay when 75 per cent of the aircraft are sitting on the ground doing absolutely nothing.’

Sources said Lundgren will still give up variable pay for the year worth two-thirds of his total package. The collapse in travel has also hit the hotels sector – yet one of its most high profile bosses has returned to full pay. Keith Barr, chief executive of InterContinental Hotels Group, was among a string of leaders to take a ‘substantial decrease’ in income from April as it looked to preserve cash.

In August, InterContinental – whose brands include Holiday Inn – cut 650 office staff after the ‘toughest first half’ in its history. 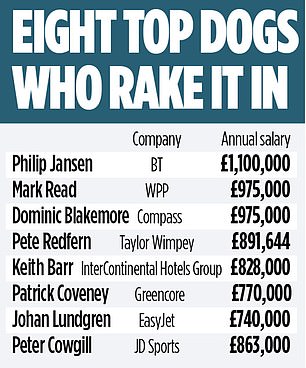 Yet in October, corporate employees including board members returned to full pay. Barr picked up a salary of £828,000 last year. Greencore, which supplies Marks & Spencer, has also brought top bosses’ pay back to their full level, despite suffering a Covid outbreak which forced it to shut down a factory in Northampton in August.

Executives including £770,000–a-year chief Patrick Coveney voluntarily cut their salaries by 30 per cent for three months from March, and returned ‘on a phased basis’ between July and September.

‘This reflected the reopening of the company’s operations that were impacted by Covid-19 and the gradual improvement in the performance of the business,’ a spokesman said.

Compass’s chief executive Dominic Blakemore took a 30 per cent cut to his near-£1million annual pay package in April. The caterer has furloughed employees and made 350 UK staff redundant since the virus outbreak.

Executives at Taylor Wimpey, Barratt and Persimmon took pay cuts at the start of the pandemic. Their salaries came back up as building sites reopened and staff returned from furlough.

City sources argued that many bosses had been working around the clock since the pandemic turned corporate Britain on its head, justifying their hefty wages.

However, the return to top salaries comes as the end of the furlough scheme looms this month. Andrew Speke at the High Pay Centre think-tank, said: ‘As the pandemic continues to restrict economic activity and unemployment figures surge, wealthy CEOs reversing their modest pandemic pay cuts will not be looked on favourably at all by most of the public.’