Hotel chambermaids in Ibiza are set to strike over ‘slave labour conditions’, leaving holidaymakers without clean rooms or new towels for two days

Hotel chambermaids on the holiday island of Ibiza are set to strike next month amid claims they are ‘losing their health’ because of slave labour conditions.

The women, known in Spain as ‘Kellys’, say they are fed up with their workload, claiming it is causing stress and injury. Around 8,000 of them will walk out on August 24 and 25.

A call will also be made to other hotel chambermaids in Mallorca, Menorca and Formentera to join in with the strike, meaning that holidaymakers in the Balearics could find their rooms not cleaned, beds not changed and no new towels for at least 48 hours.

Hotel chambermaids on the holiday island of Ibiza, pictured, are set to strike on August 24 and 25

The striking maids are demanding that every hotel in Ibiza carries out an investigation to see how much work the women can bear without hurting themselves long-term.

One chambermaid asked: ‘We are presented each day with a list and number of rooms to clean. Are waiters paid according to how many cups of coffee they serve?’

Rafa Sánchez, a representative of the CGT union, said the women were being treated unfairly with no regard for their health.

He said: ‘According to the law, the workload should be regulated.

‘That is why more than ever the strike is necessary.’

The chambermaids agreed that ‘meetings, protests and demonstrations’ were no longer making any impact so a walkout was unavoidable. 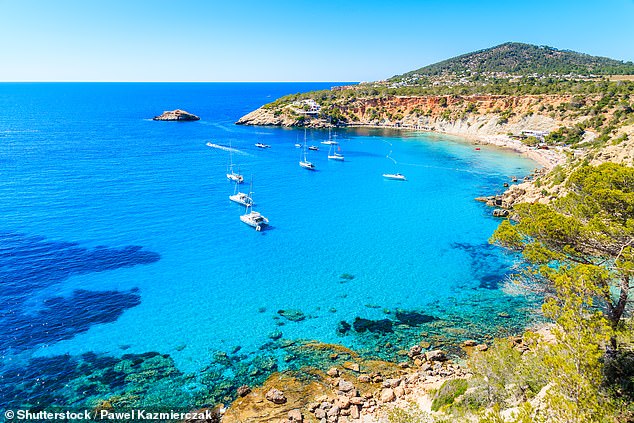 The striking maids are demanding that every hotel in Ibiza carries out an investigation to see how much work the women can bear without hurting themselves long-term. Pictured is Cala d’Hort bay on the island

A spokeswoman for the Association of Kellys of Ibiza said they wanted to remind politicians that there were many workers in the Balearics who worked to sustain the islands’ tourism but were not in the public eye.

‘Without us, there would be no tourism’, she said.

One supporter added: ‘Sadly most employers do not care in the least about your health and less your salary as long as they get the maximum benefit.’

Strains and injuries are reported to be the main reason why chambermaids leave their jobs and they believe they are ‘being exploited as women’.