The third-term congresswoman made the comment during a debate over a spending bill for health and human services programs.

‘It is tiring to hear from so many sex-starved males on this floor talk about a woman’s right to choose,’ she said.

A trio of aides seated behind her at first didn’t look up from their smart phones following the remark, although it elicited groans from inside the chamber.

Republican Rep. Rob Woodall of Georgia promptly asked Torres if she would like to modify her statement, as lawmakers are allowed to do under House rules.

She said she would – only to repeat the offending comment.

‘Mr. Speaker, I would just like to ask my friend if she’d like to change her last statement,’ Woodall inquired. 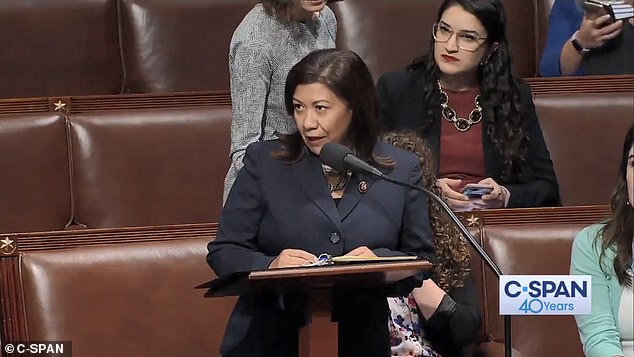 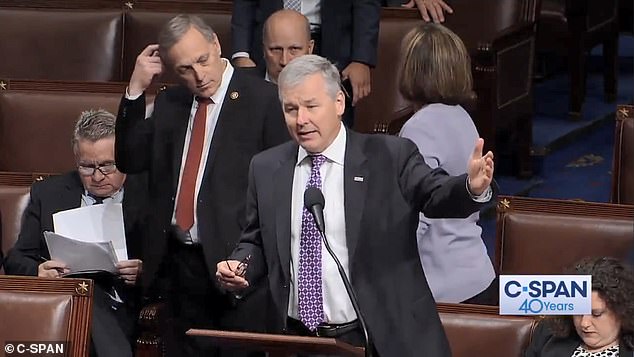 Republican Rep. Rob Woodall of Georgia promptly asked Torres if she would like to modify her statement, which she eventually did

‘Mr. Speaker, if it pleases my colleague on the other side, I will withdraw my statement about sex-starved males on the floor,’ she said.

That prompted a brief intervention from the chair, as well as a second opportunity to pull back the comment.

‘I will agree to withdraw my statement regarding …’ she said.

‘Mr. Speaker, I want unanimous consent to withdraw my statement,’ she said. With her words ‘withdrawn,’ she continued: ‘It is tiring to be here on this floor or in committee, as a woman, to continue to be counseled about what types of affordable … family planning conversations that rightfully I deserve to have with my own doctor.’

Choosing when women want to have a family and to avoid pregnancies before they become pregnancies,’ she said. Something she said ‘continues to be denied to American women day in and day out on this floor.’

The House was debating a provision that prevented the government from spending funds for a Trump Administration regulation that permit medical professionals to refuse to provide abortions or contraception based on ‘conscience and religious freedom.’