Judiciary Committee Chairman Jerry Nadler accused Barr of having federal officers use ‘pepper spray and truncheons’ against protesters to create visuals to aide President Donald Trump with his ‘law and order’-themed re-election campaign.

‘The president wants footage for his campaign ads, and you appear to be serving it up to him as ordered,’ Nadler said. ‘The protesters aren’t mobs, they’re mothers, they’re veterans and mayors.’

Throughout the hearing, Barr defended the federal response to the Black Lives Matter protests that broke out after George Floyd’s Memorial Day death at the hands of a white police officer.

‘Since when is it OK to burn down a federal courthouse?’ Barr asked the Democrats in the room. 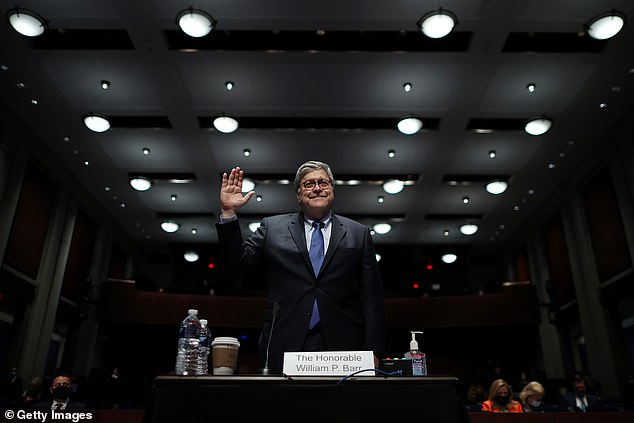 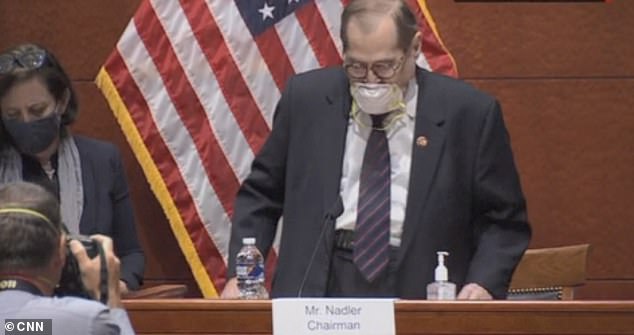 The hearing began about an hour late because Judiciary Committee Chairman Jerry Nadler was in a minor car accident Tuesday morning. Nadler went after Barr in his opening statement 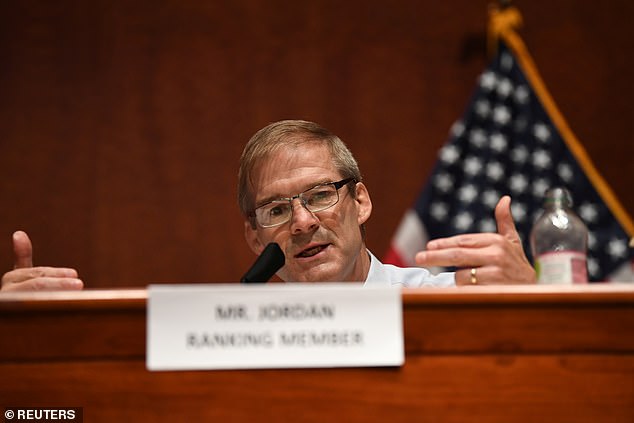 Barr’s allies on the Republican side defended him furiously.

‘Wow. I’m beginning to believe that you’re the cause of the common cold, and possibly even the COVID-19 because everything’s being thrown at you,’ remarked Rep. Doug Collins, a Republican from Georgia who’s seeking a Senate seat.

Rep. Jim Jordan, an Ohio Republican who serves as the committee’s ranking member, gave a visual presentation as part of his opening statement – showing scene after scene of anti-police disorder to serve as a prebuttal to assist Barr, under fire for the federal handling of the ‘Black Lives Matter’ protests.

‘Well, I hope that Mr. Jordan will never complain about the length of my opening statement,’ Nadler said after the short film aired, adding that the Republicans didn’t abide by the audio-visual guidelines and give the committee 48 hours notice before showing a video.

The video showed a number of news people talking about ‘peaceful protests’ and then cut to a press conference featuring the grieving wife of David Dorn, a retired police officer who was shot in St. Louis on June 2 in the aftermath of George Floyd’s Memorial Day death.

It then showed imagery of protesters setting fires, throwing fireworks at police, trying to knock down fencing around federal property and general unrest.

Nadler opened the hearing by reading off a laundry list of Barr’s perceived transgressions. 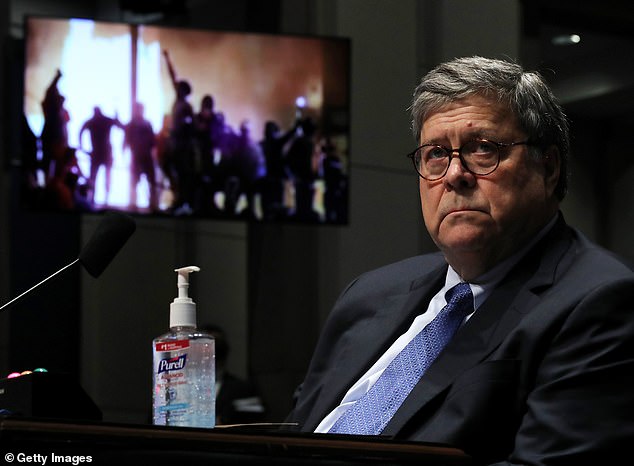 ‘We are as a nation witnessing the federal government turn violently on its own people,’ the New York Democrat charged.

Nadler placed the most blame on Trump. ‘He could not have done this long. He needed help.’

‘And after he finished utterly humiliating his first attorney general, he found you,’ Barr said, addressing the witness.

‘In your time at the department you have aided and abetted the worst failings of the president,’ Nadler continued.

He accused the attorney general of downplaying systemic racism and said he showed ‘open hostility to the Black Lives Matter movement.’

Nadler also said Barr spread ‘disinformation about voter fraud,’ said the AG tried to change the census laws to aid Trump and Republicans and misrespresented the findings of the Mueller Report.

‘Again and again you personally have interfered with ongoing criminal investigations to protect the president and his allies from the consequences of their actions, Nadler also said.

Prior to showing the video, Jordan used his opening remarks to suggest Barr was being picked on by Democrats because he had testified that President Obama’s administration ‘spied’ on the Trump campaign.

Barr opened up by paying his respects to the late civil rights icon, Rep. John Lewis, who is lying in state on Capitol Hill.

He said he believed the Black Lives Matter protesters ‘concerns are legitimate.’

‘At the same time I think it  would be an oversimplification to treat the problem as rooted in some deep-seated racism generally infecting our police departments,’ Barr said. ‘It seems far more likely that the problem stems from a complex mix of factors that can be addressed with focused attention over time.’

Barr pointed out that several more white Americans than black Americans had been killed by officers this year.

‘Each of those lives matter,’ Barr testified.

Barr said that federal forces have gone into cities like Portland to defend federal property from being burned down. And he reported to lawmakers that the protests have been ‘hijakced by violent instigators.’

‘The rioters come equipped for fighting,’ Barr said, adding that they ‘cannot reasonably be called protests.’

Barr will tell members of the House Judiciary Committee at a much-anticipated hearing on Tuesday that the violence taking place in Portland, Oregon, and other cities is disconnected from the death of Floyd, which he described as a ‘horrible’ event that prompted a necessary national reckoning on the relationship between the Black community and law enforcement.

‘Largely absent from these scenes of destruction are even superficial attempts by the rioters to connect their actions to George Floyd’s death or any legitimate call for reform,’ Barr will say of the Portland protests, according to a copy of his prepared remarks released by the Justice Department on Monday.

Barr will also touch on other controversies that have shadowed his tenure, including his handling of the investigation into Trump campaign ties to Russia, which he derisively refers to as ‘the bogus “Russiagate” scandal.’

The testimony underscores the Justice Department’s ongoing effort to differentiate between increasing violence in some cities and the death of Floyd, which civil rights prosecutors are investigating as a potential crime. Massive but peaceful demonstrations had followed Floyd’s death in May.

The attorney general, speaking as Congress and the public pay respects to the late Rep John Lewis, will acknowledge to lawmakers that Floyd’s death struck a chord in the Black community because it reinforced concerns that Blacks are treated differently by police.

But he will also condemn Americans who he says have responded inappropriately to Floyd’s death through what he said was rioting and anarchy.

‘As elected officials of the federal government, every member of this committee – regardless of your political views or your feelings about the Trump Administration – should condemn violence against federal officers and destruction of federal property,’ Barr says.

‘So should state and local leaders who have a responsibility to keep their communities safe. To tacitly condone destruction and anarchy is to abandon the basic rule-of-law principles that should unite us even in a politically divisive time.’

Civil unrest escalated in Portland after federal agents were accused of whisking people away in unmarked cars without probable cause; they were detained and later released.

And in Washington, DC, peaceful protesters were violently cleared from the streets by federal officers using smoke bombs and pepper balls ahead of a photo op by Trump in front of a church, where Barr had accompanied him.

The attorney general has defended as necessary the broad use of law enforcement power to deal with the situation, but the department’s internal watchdog has opened investigations into use of force and other tactics by agents in both cities.

The hearing on Tuesday marks Barr’s first appearance before the House Judiciary Committee, bringing him face-to-face with a panel that voted last year to hold him in contempt and is holding hearings on what Democrats allege is politicization of the Justice Department under his watch.

It comes during a tumultuous stretch in which Barr has taken a series of actions cheered by President Donald Trump but condemned by Democrats and other critics.

Barr makes reference in his prepared statement to that antagonistic relationship, saying that ‘many of the Democrats on this Committee have attempted to discredit me by conjuring up a narrative that I am simply the President’s factotum who disposes of criminal cases according to his instructions. Judging from the letter inviting me to this hearing, that appears to be your agenda today.’

Beyond the federal response to the demonstrations, Barr is also expected to be pressed in detail about his intervention in criminal cases arising from special counsel Robert Mueller’s Russia investigation.

The hearing will provide Barr with a forum to offer his most detailed account to date for his actions in the criminal cases, which he has said were taken in the interests of justice and without political pressure.

Those include the Justice Department’s decision to drop the prosecution of former Trump administration national security adviser Michael Flynn – a request now tied up in court – and his firing last month of the top federal prosecutor in Manhattan, whose office oversaw investigations into allies of the president.

That decision was at the center of a separate hearing before the same committee last month, when one of the prosecutors alleged that politics from Justice Department leadership had influenced the handling of the sentence.

House Speaker Nancy Pelosi said Monday on MSNBC that Democrats want to question Barr about how Trump ‘is undermining the Constitution of the United States’.

Barr previously rebuffed the House committee and Pelosi said that ‘we hope that he will show up’.

In the past, Barr has said that Flynn, who pleaded guilty as part of Mueller’s probe to lying to the FBI, should never have been charged and that the original sentencing recommendation for Stone – also charged in the Mueller investigation – was excessive.

Barr’s opening statement does not delve into the details of the case, though he will insist Tuesday that Trump has not attempted to interfere in those decisions and has ‘played a role properly and traditionally played by presidents’.

Republican lawmakers have been overwhelmingly supportive of Barr’s performance and are likely Tuesday to help him push back against some of the Democratic criticism.

Even among the GOP members, though, Barr faces pressure to deliver results soon on an investigation that he initiated into the origins of the Russia probe.

It is not clear when or how that investigation, being led by US Attorney John Durham of Connecticut, will end, but Barr has said he hopes to have results by the end of the summer. 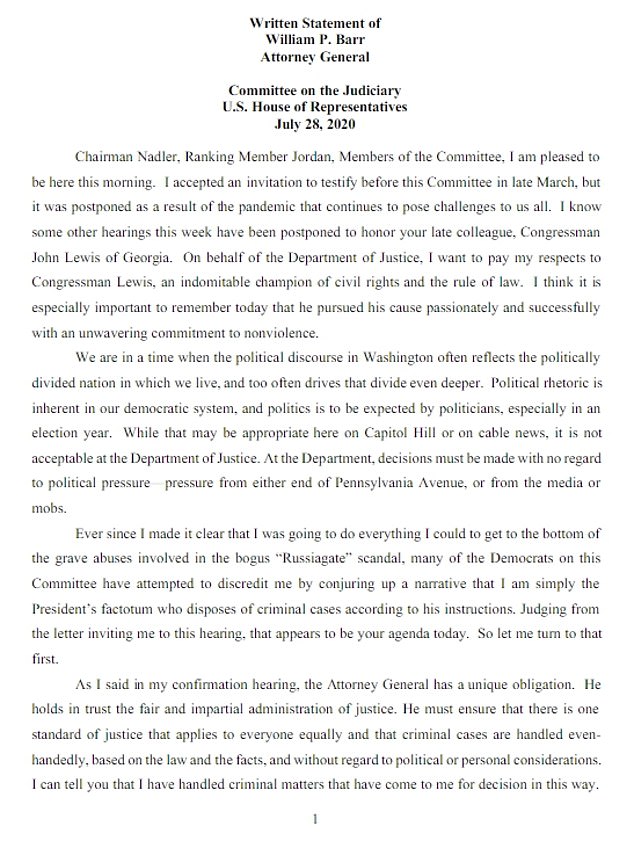 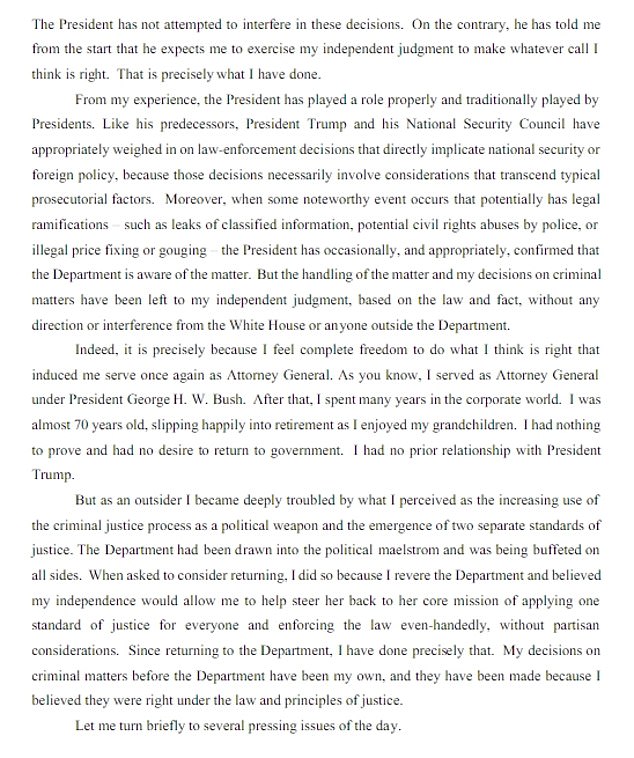 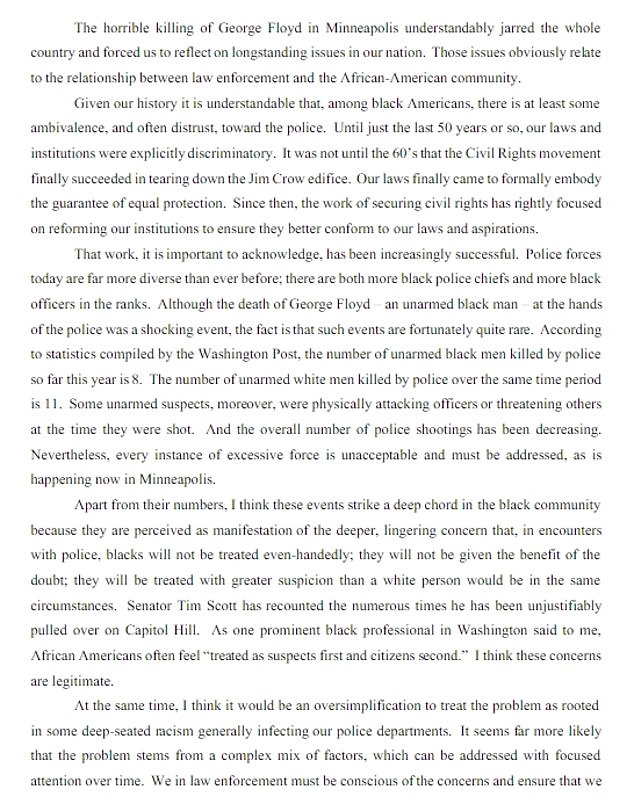 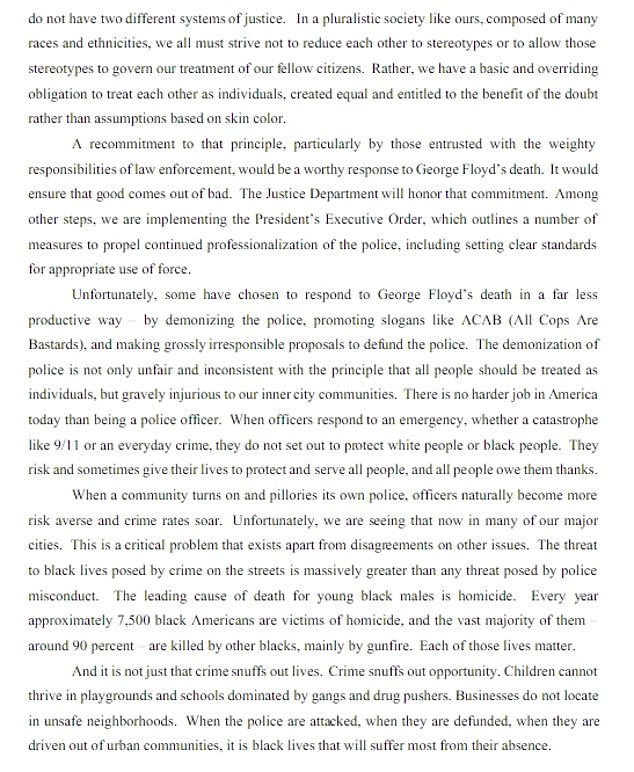 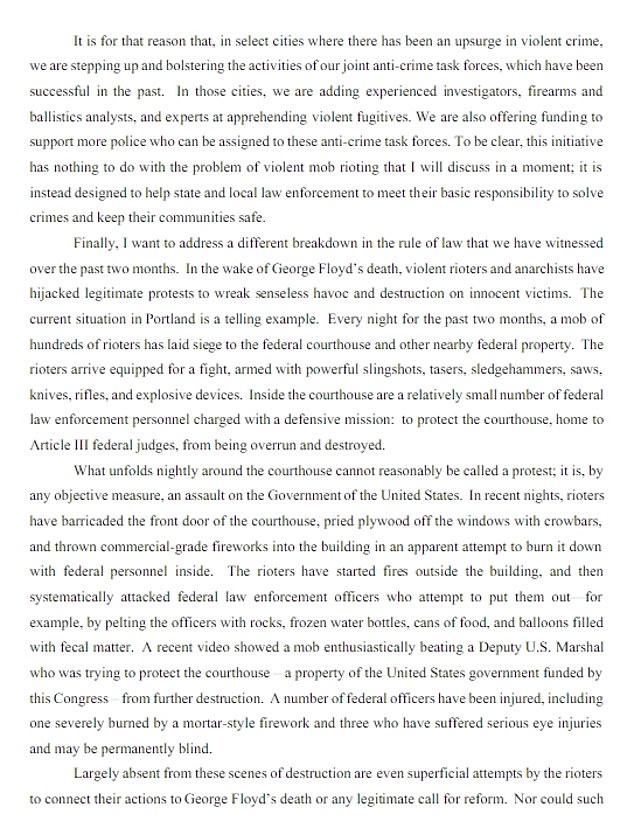 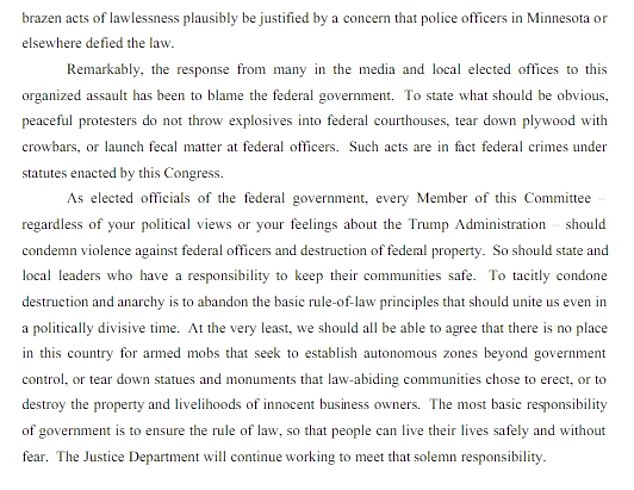