House prices have fallen for the first time this year, dropping 1.3 per cent in the last month and taking the cost of average home to £365,173.

The fall follows successive interest rate rises by the Bank of England which have increased rates on new mortgages – but Rightmove said the fall was in line with the average August drop over the past 10 years.

Summer holidays mean demand falls over this period and sellers are forced to price competitively to drive interest.

Going down: House prices fell 1.3% in the last month, according to Rightmove

Earlier this month, the Bank of England announced a 0.5 per cent increase in its base rate to 1.75 per cent – the biggest rise in 27 years – pushing up rates on new fixed mortgages and variable mortgages even further.

Interest rates are putting added pressure on house price affordability, at a time when average monthly mortgage payments for new first-time buyers putting down a 10 per cent deposit have exceeded £1,000 for the first time

Buyer enquiries to agents are down 4 per cent compared to the same time last year, Rightmove said, but remain 20 per cent per cent higher than 2019.

August marks 20 years of Rightmove’s House Price Index, with national average asking prices more than doubling in those 20 years (+134 per cent), from £155,994 to £365,173, outstripping both salaries and general inflation. 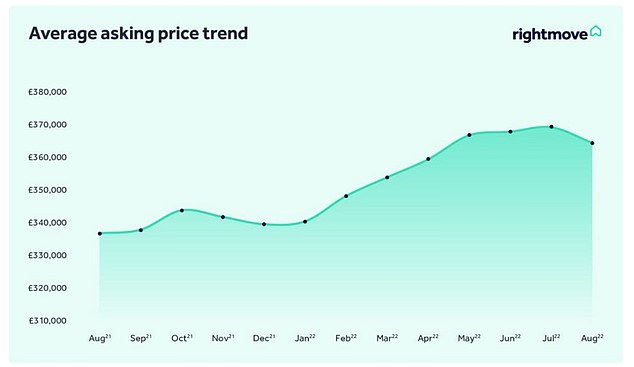 Tipping point? This month saw the first drop in house prices this year as the average home fell 1.3% compared to  July 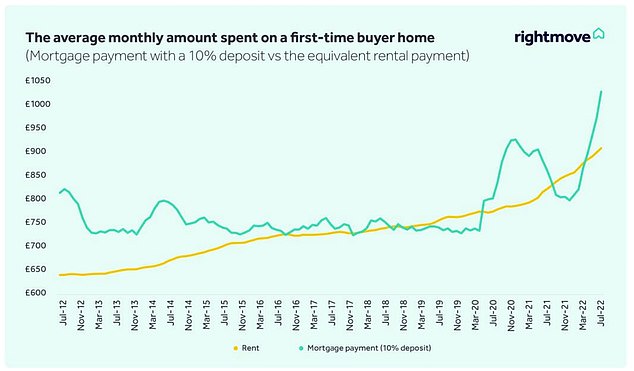 Cost increase: The amount that first time buyers are spending on their mortgage each month has reached £1000 for the first time

Tim Bannister, Rightmove’s director of property science said: ‘Several indicators point to activity in the market continuing to cool from the lofty heights of the last two years.

‘It’s likely that the impact of interest rate rises will gradually filter through during the rest of the year, but right now the data shows that they are not having a significant impact on the number of people wanting to move.

‘Demand has eased a degree and there is now more choice for buyers, but the two remain at odds and the size of this imbalance will prevent major price falls this year.’

Regionally London saw the biggest drop with prices down 3.5 per cent in the capital, but year on year the prices have increased 5.2 per cent. House prices in Wales increased the most this month jumping 2.1 per cent to £261,117 against a year on year increase of 10.6 per cent.

Jordan Yorath, partner at Monroe Estate Agents in Leeds said: ‘So far in August, we have been advising some clients in the higher value property sector to market their home outside of the traditional summer holiday period.

‘After a prolonged period where many people’s lives were restricted in terms of holidays and travel, we felt best that clients seek to launch their properties outside of the month of August in particular, so that they could reach the maximum number of engaged buyers when they come to market.

‘July was a really strong month for us, and while some might be enjoying a summer break away, we have been busy preparing for the rest of the year, with a great number of listings also ready for September onwards.’