House prices have only ever been as expensive as they are now compared to wages twice in the past 120 years.

That one of those occasions was at the peak of the 2000s property boom will come as no great shock, but that the other was around the start of the 20th century might be a surprise for many.

And before the 1900s buying a home in Britain was considerably more expensive than then.

Houses have only ever been more expensive twice in the past 120 years but go back beyond 1900 and they were even pricier compared to wages than now. (Data sources: Bank of England, Land Registry, Office for National Statistics, and Schroders, as at 30 September 2019)

This very long-term picture has been delivered by a deep dive into 174 years of UK housing market data by investment firm Schroders, taking us from the Victorian Era, through the world wars, post-war boom, the 1960s and 70s and onto Thatcher’s eighties, the Blair years, the financial crisis, austerity and Brexit Britain.

Recent decades will be familiar to property market watchers, but the earlier period is not.

So, why if we think houses at eight times wages are very expensive now, were they at 13 times wages in the 1840s?

And what did the Victorians and Edwardians do to make them cheaper over the course of the next 70 years?

‘It may only be of historic curiosity, but it is interesting that house prices were even more expensive in the latter half of the 19th century’, said Duncan Lamont, Schroders head of research and analytics, who dug into the ‘treasure trove’ of the Bank of England’s Millennium of Data for the 174 year spanning housing report.

He added: ‘They then went on a multi-decade downtrend relative to earnings. This only bottomed out after World War I.

‘There are three important drivers of this: more houses, smaller houses, and rising incomes.’ 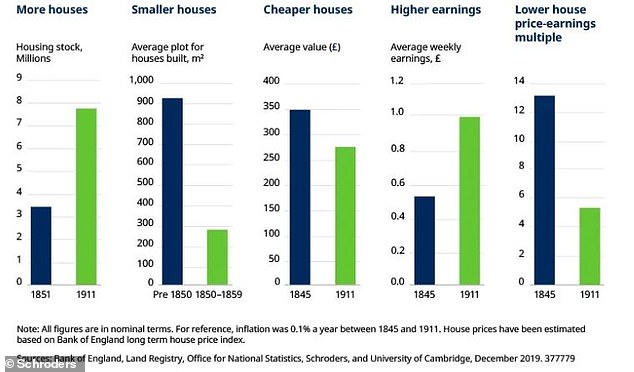 More houses, smaller homes and rising wages were the three main factors that drove almost 70 years of property getting cheaper through the Victorian and Edwardian eras 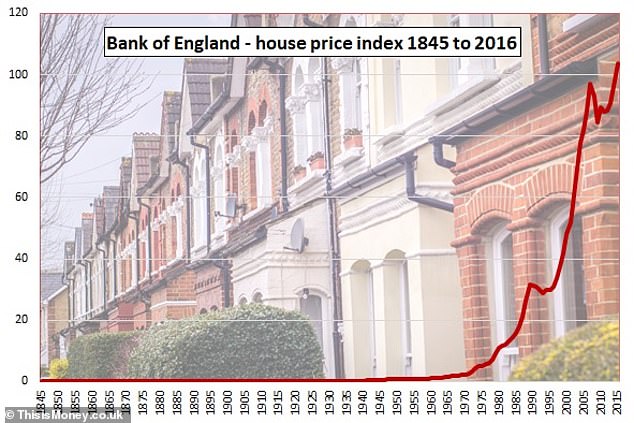 Zoom out with the Bank of England’s house price index from 1845 to 2016 and property values barely shifted until the 1960s – beyond that nominal prices rocketed (Data source: BoE)

Where this shift becomes relevant today is the extent of the changes that made houses so much more affordable – and how tough it would be to repeat that now.

The Victorians and Edwardians didn’t just build more houses, they more than doubled the housing stock in England, Wales and Scotland between 1851 and 1911 – from 3.8 million houses to 8.9 million houses.

Our ancestors also made houses smaller and more packed in, with a shift from detached houses to terraces and smaller plot sizes.

Before 1850, the average house had a plot size of 913 square metres, but homes built over the next 50 years had average plot sizes of less than a third of that, at 268 square metres.

Meanwhile, even terraced homes got smaller. A pre-1850 terrace had an average plot size of 278 square metres, but over the next five decades that fell to 147 square metres.

The final piece of the jigsaw was wages going up. 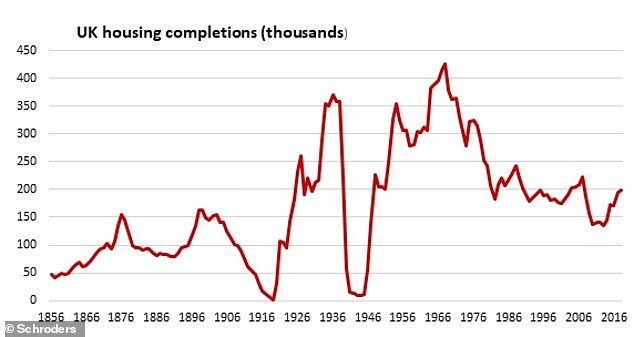 The Victorian era saw a building boom as towns and cities expanded and transport improvements delivered the suburbs, the two world wars were separated by a private sector housebuilding boom in the 1930s and public sector homebuilding then boomed in the decades after the Second World War 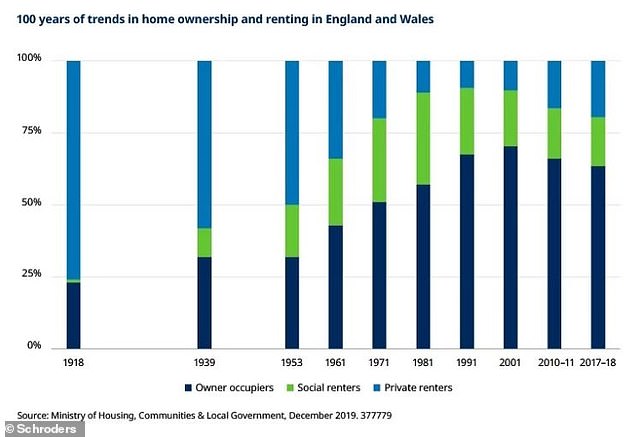 Homes may have spent almost seven decades getting cheaper, but at the end of World War I in 1918 Britain was a nation of renters – with more than three-quarters of the population tenants

But despite homes getting cheaper, Duncan says this was not really a great time for UK homebuyers adding that ‘we were a nation of renters back then’.

Even by 1918, when house prices had fallen for pretty much 70 years, more than three-quarters of people rented.

But it was also the second half of the 20th century when home-ownership took off properly, peaking at more than 70 per cent in the early 2000s.

Since then, affordability has deteriorated – as higher prices demand ever bigger deposits and cause problems for people unable to secure bigger mortgages – and ownership has declined to 63.8 per cent.

Back to the Victorian era, between 1850 and 1900 house prices went from about 13 to eight times average earnings. 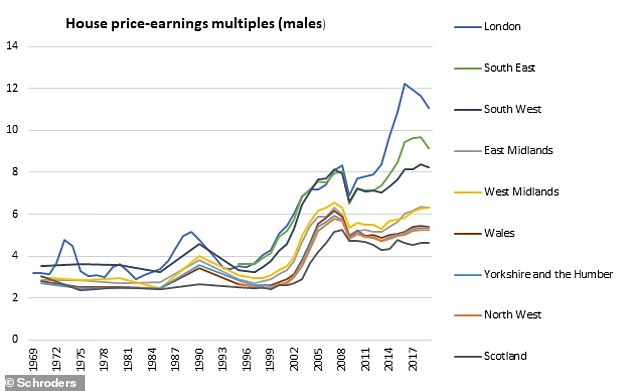 The Schroders report notes that from the 1960s until the late 1990s there was little pronounced difference between the house price to earnings ratios in different regions. The 2000s housing boom dramatically changed that

Could we pull the same levers today to get back to the long-term average of 4.5 times wages seen before the 2000s boom?

It seems unlikely, after all doubling today’s housing stock would take us from 28 million to 56 million homes and the houses and flats we build today aren’t praised for their generous sizes and big gardens.

Duncan says: ‘The last time there was a sustained decline in the house price-earnings multiple was the second half of the 19th century.

‘Average house prices fell for more than 50 years thanks to substantial building of houses, many of which were smaller than existed before. At the same time earnings rose.

‘How likely or even desirable would that be today?

‘The UK’s heavily mortgaged consumers would struggle to cope with 50 years of falling house prices. It would also be political suicide for whoever was deemed responsible.

‘A shift towards the building of smaller houses would also seem unlikely – research has found that houses are smaller today than at any point since at least the 1930s.

‘Hobbit homes cannot be ruled out entirely but I’m not sure how positive an outcome that would be.’

The best hope we have then is rising wages, he argues.

A return to better wage growth, combined with more houses built and lower property inflation would help the situation, albeit the caveat is that higher wages often mean a robust economy and potentially a stronger property market.

Duncan adds that ‘the elephant in the room here is interest rates’. He points to the recent Bank of England working paper that concluded almost all of the rise in house prices relative to incomes between 1985 and 2018 was down to a sustained decline in real interest rates.

To paraphrase people much smarter than me: cheap money equals more expensive houses.

On the basis that we probably can’t double the housing stock and don’t want much smaller homes, avoiding money getting much cheaper while trying to get wages up looks like Britain’s best hope.

Bank of England on how cheap money pushed up house prices

A Bank of England paper looking at the past four decades of house price inflation and what has driven it, written by David Miles and Victoria Monro, was released before Christmas.

It looked at the relationship between house prices and credit and argued that the declining cost of borrowing had played a major part in long-term property inflation.

It said: ‘Real house prices in the UK have almost quadrupled over the past 40 years, substantially outpacing real income growth.

‘Meanwhile, rental yields have been trending downwards — particularly since the mid‑90s. This paper reconciles these observations by analysing the contributions of the drivers of house prices.

It shows that the rise in house prices relative to incomes between 1985 and 2018 can be more than accounted for by the substantial decline in the real risk‑free interest rate observed over the period.’