The average home now costs nearly a quarter of a million pounds with mortgage approvals hitting their highest level since the financial crisis erupted.

Rising activity in the housing market pushed the price of the average home up 7.3 per cent in the last 12 months to £249,870, according to the Halifax index for September.

Further evidence of the lockdown mini-boom came as Britain’s biggest mortgage lender said it recorded the highest level of approvals since October 2008, adding that it had also received more mortgage applications from both first-time buyers and home movers than any time since 2008.

Experts predict the uptick to be short lived however, claiming demand is being driven by a combination of pent-up demand released after the lockdown market freeze, the stamp duty cut, and home workers looking to ‘upsize’ to larger properties.

Seperate figures lagging the Halifax report, released by the ONS today, based on Land Registry sold prices data delayed by lockdown, showed house prices up 2.3 per cent in the year to July.

This was the final delayed ONS index release and August figures will arrive on 21 October.

Most forecast the market to cool off in coming months as demand wanes and the economic realities of the pandemic start to become more apparent.

‘Few would dispute that the performance of the housing market has been extremely strong since lockdown restrictions began to ease in May.’

He adds: ‘There has been a fundamental shift in demand from buyers brought about by the structural effects of increased home working and a desire for more space, while the stamp duty holiday is incentivising vendors and buyers to close deals at pace before the break ends next March.’

After the Government lifted the restrictions on moving house it delivered a boost to home buyers with a stamp duty holiday that means buyers pay no tax on the first £500,000 of any property purchase.

This will save those buying the most expensive homes costing £500,000 or more a maximum of £15,000 and lift all those paying less than that out of the property moving tax net altogether. 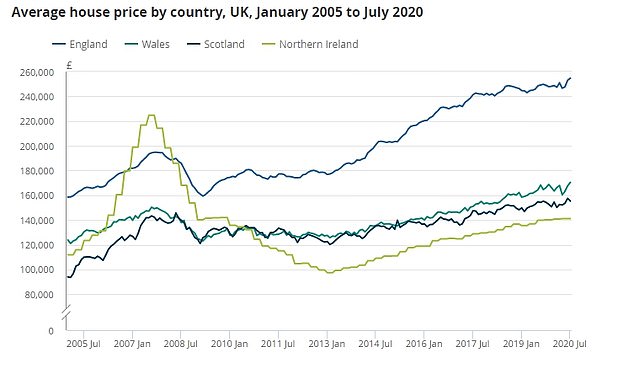 Estate agents in London and the South where house prices are higher and stamp duty bills more punitive report that the cut has spurred many potential buyers into action.

Galley added however that he expects the mini-boom to be short lived.

‘It is highly unlikely that the housing market will continue to remain immune to the economic impact of the pandemic,’ he said.

‘The release of pent up demand and indeed the stamp duty holiday can only be temporary fillips and their impact will inevitably start to wane.

‘And as employment support measures are gradually scaled back beyond the end of October, the spectre of increased unemployment over the winter will come into sharper relief.

‘Therefore while it may come later than initially anticipated, we continue to believe that significant downward pressure on house prices should be expected at some point in the months ahead as the realities of an economic recession are felt ever more keenly.’

First-time buyers in particular may already be feeling this after lenders pulled deals for borrowers with small deposits and rising house prices caused many to shelve their home buying plans.

What remains uncertain is how long the uptick will last for everyone else as the economy remains in flux.

With furlough, mortgage holidays and credit card payment holidays all coming to an end this month many experts have a gloomy outlook on the economy, which could spell an end for the recovery in the housing market.

David Westgate, of Andrews Property Group, said: ‘The growing conservatism of lenders who have one eye on rising unemployment and a potentially unprecedented fiscal pinch is playing a major role in cooling the market down.

‘For now, we have a huge pipeline of property transactions tied up in solicitors’ hands, all waiting to complete before the end of the year to avoid increased stamp duty charges.

‘The fact that the market is cooling now means we will hopefully avoid a cliff edge scenario at the end of March when the stamp duty holiday ends.’

Three weeks ago, economists at the Centre for Economics and Business research predicted that house prices will fall by almost 14 per cent next year when the stamp duty holiday comes to an end and job losses rise further.

The Halifax data, based on its own approvals, shows the 7.3 per cent annual rise in house prices is the strongest growth since mid-2016.

It follows a similar set of data from Nationwide Building Society last week. Britain’s biggest mutual said the property market mini-boom pushed prices up 5 per cent on a year ago – the biggest jump since September 2016.