House prices will fall this year, says OBR in the Spring Statement

House prices will fall this year, predicts the Budget watchdog, as it drags forecast down on signs of Brexit slowdown

By Lee Boyce for Thisismoney.co.uk

House prices are predicted to fall in 2019, according to revised forecasts from the Office for Budget Responsibility.

The figures from the Government’s Budget watchdog, published today alongside the Spring Statement, are a change of stance from its October 2018 forecast, when values were expected to rise 3 to 4 per cent in 2019 and the years beyond to 2024.

Property experts have said that concerns over Brexit and stretched affordability have caused house price growth to flag.

Property shock: The OBR now forecasts house prices to slump throughout the rest of 2019 – just six months after predicting a 3% rise

The OBR revised its five-year prediction down from 20 per cent to 17 per cent growth and said: ‘Indicators of housing market activity and price expectations have deteriorated significantly since our October forecast and are consistent with a further fall in house price inflation.’

The OBR now sees annual house price inflation sliding below zero before bouncing back to 4 per cent in two years’ time.

In the statement, the OBR said that house price inflation ‘slowed significantly during 2018’ reaching 2.7 per cent in the last four months of the year, down from 4.6 per cent a year earlier.

It is also way below the seven per cent average rate recorded in 2016.

The OBR cites the Halifax and Nationwide Building Society indices, which are timelier than Office for National Statistics data used in its own forecast.

It says that these have been ‘generally consistent with a further slowdown.’

Therefore, it concludes that it expects to see annual house price inflation to fall to just below zero towards the end of 2019, for the first time since 2012.

The outlook for house prices in the most recent bellwether Royal Institution of Chartered Surveyors monthly report was its gloomiest in ten years.

The difference between member estate agents and property surveyors anticipating rising rather than falling house prices dropped to  minus 22 per cent last month.

High house prices and a wait-and-see approach due to Brexit, particularly in London and the commuter belt, have been blamed for the slowdown.

Simon Rubinsohn, chief economist at the Rics, said: ‘Resolution of the Brexit negotiations is widely seen as critical to encouraging potential buyers back into the market, although whether that will be sufficient in London and parts of the south east where affordability remains stretched and the tax changes are most penal remains to be seen.’ 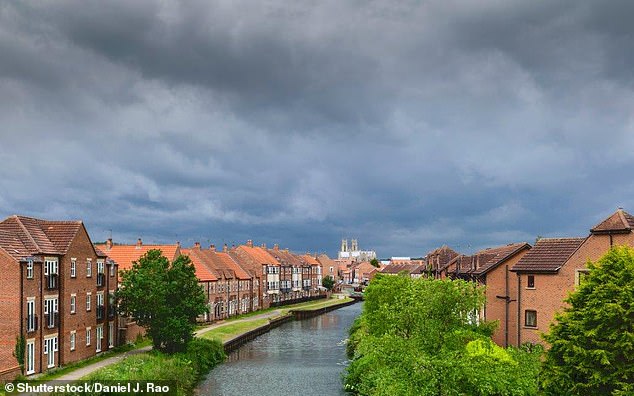 Stormy outlook: The OBR says property prices will struggle this year – before recovering in 2020

However, despite the slump, the OBR goes on to predict property values to still grow over the next five years.

It says: ‘We expect house price inflation to pick up as a result of stronger real household income growth and continued pressure of demand on supply.

‘We expect house price inflation to reach around four per cent a year by the end of the forecast horizon [the start of 2024].

‘We expect house prices to rise by almost 17 per cent between the fourth quarter of 2018 and the first quarter of 2024 – close to household income growth over the same period.

‘That compares with forecast growth of nearly 20 per cent in our October forecast.’

Last September, Bank of England governor Mark Carney warned that a no-deal Brexit could crash house prices and send a financial shock through the economy.

He said that his worst-case scenario, values could fall as much as 35 per cent in the three years after the event of a no-deal.

It is believed that the forecast was based on the worst-case scenario that envisaged unemployment rising to 9.5 per cent and interest rates climbing to four per cent.

It reported that the average UK home rose by 2.5 per cent in the year to December – the slowest annual pace of growth since July 2013.

The latest Halifax house price index revealed the annual rate of growth slowed in January, rising by 1.3 per cent, with monthly prices dropped 2.9 per cent – the fastest pace of decline in over eight years.

Similarly, Halifax’s rival Nationwide found in its own index at the end of last month that house prices inched up just 0.1 per cent in the year to January 2019.