The benches cleared after Oakland’s 7-2 victory over the Astros on Sunday, unleashing tempers between the American League West rivals months after Houston’s sign-stealing scandal was brought to light by Oakland pitcher Mike Fiers.

Oakland’s Ramon Laureano got hit by a pitch – for the third time in the three-game series and second time that game – this one by Humberto Castellanos with one out in the seventh. Laureano began exchanging words with animated Astros hitting coach Alex Cintron, then left first base, threw down his batting helmet and began sprinting toward him in Houston’s dugout.

Players rushed out of both dugouts to join the fray. A’s and Astros players who were sitting in the seats, observing COVID-19 social-distancing protocols, also rushed onto the field. 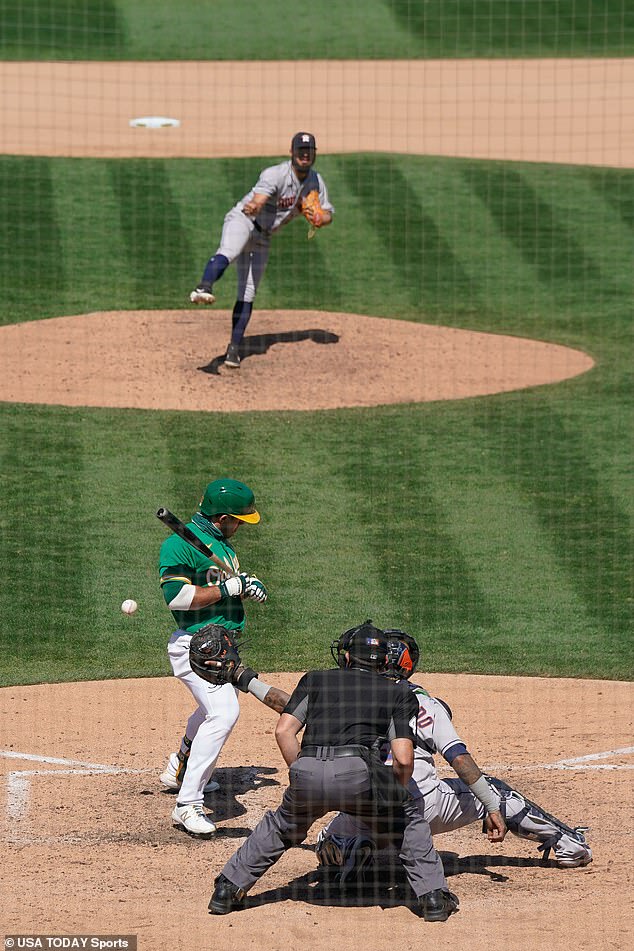 Laureano is pictured getting hit by Castellano’s pitch 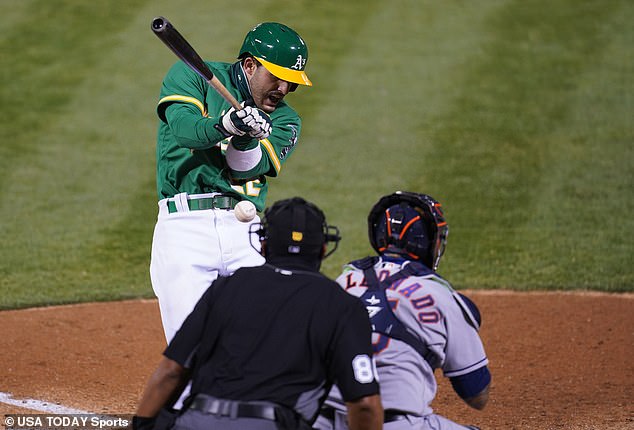 Laureano is pictured flinching after being struck by the pitch 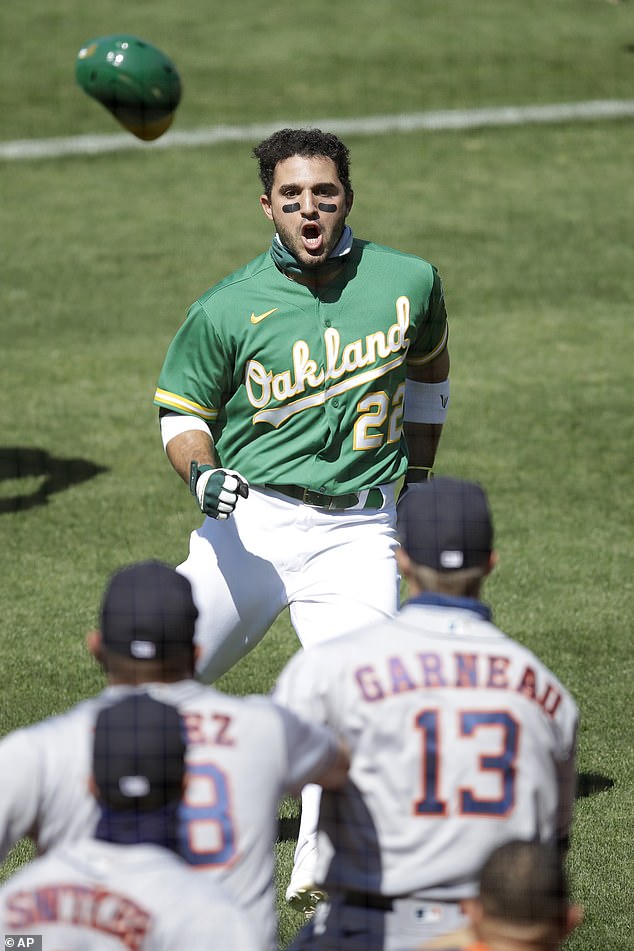 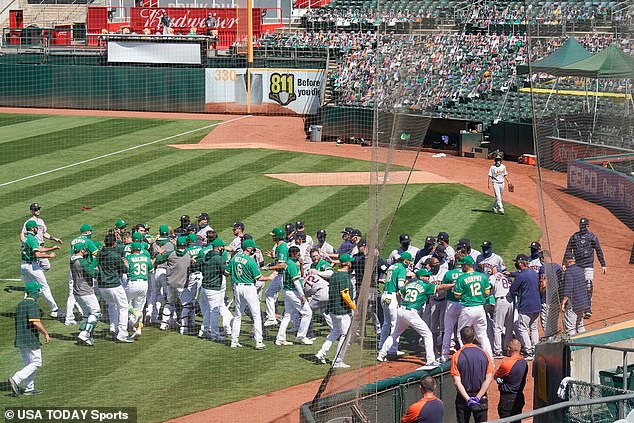 Both teams are pictured as the brawl began 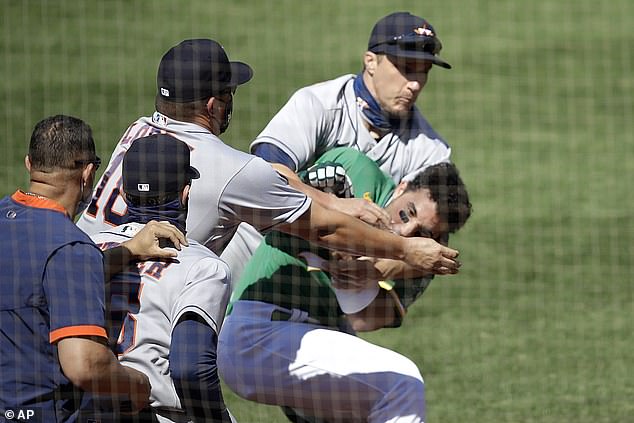 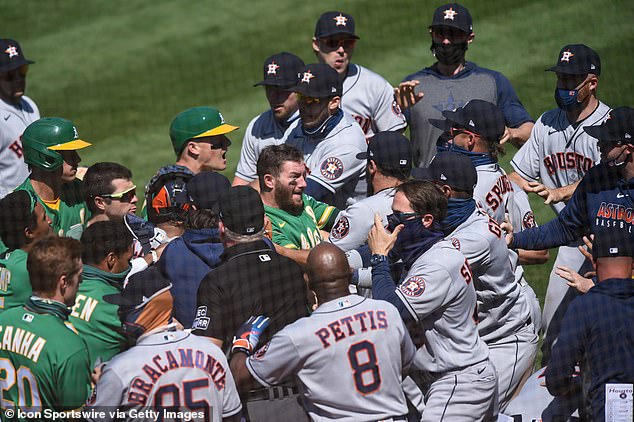 Laureano was ejected by plate ump Ted Barrett, and the umpiring crew could easily be heard yelling at the players to ‘get back to the dugout!’ through a ballpark with no fans, in footage reposted by sports journalist Dillard Barnhart.

Oakland batters were hit five times during the series, while no Houston hitters were plunked.

A’s catcher Austin Allen was also ejected and Astros manager Dusty Baker was tossed a half inning earlier. Houston lost its fifth in a row overall.

A 2019 MLB investigation found that the Astros were communicating opponents’ upcoming pitches to their own hitters with the help of a centerfield camera, which would record opposing catchers’ hand signals.

That information was then relayed to the dugout, where Astros players would bang on a trash can to indicate the pitch their teammate in the batter’s box should expect to see.

Fiers was a member of the Astros that season and witnessed the cheating.

The Astros received a maximum $5 million fine, forfeited first- and second-round draft picks in 2020 and 2021, and manager AJ Hinch as well as general manager Jeff Luhnow were each suspended one year before swiftly being fired by club owner Jim Crane. 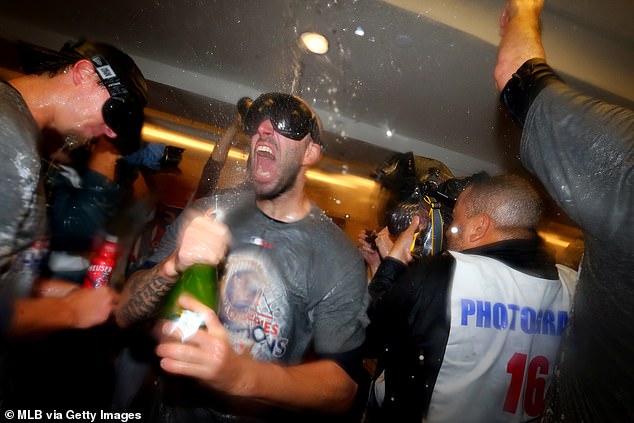 Fiers said earlier this year that he was receiving death threats as a consequence of blowing the whistle on Houston’s sign-stealing scheme that has recently tarnished that club’s 2017 World Series title.

‘Whatever, I don’t care,’ Fiers, now a member of the Oakland Athletics, told the San Francisco Chronicle on Thursday. ‘I’ve dealt with a lot of death threats before. It’s just another thing on my plate.

‘If I’m worried about any retaliation,’ he added, ‘I’m not going to be ready for the season.’ 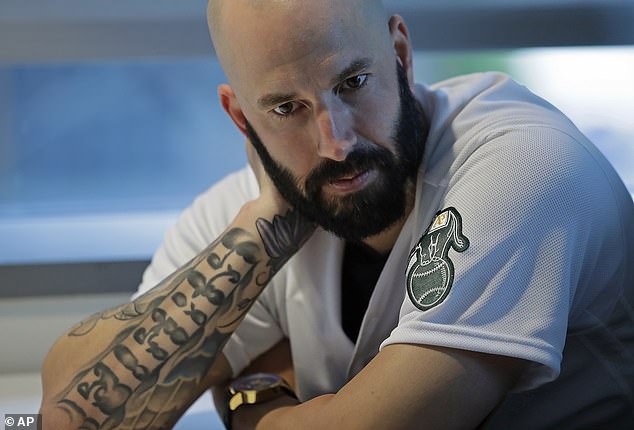 Athletics pitcher Mike Fiers says he has received death threats as a consequence of blowing the whistle on Houston’s sign-stealing scheme that has recently tarnished that club’s 2017 World Series title. Fiers was a member of the Astros that season and witnessed the cheating

Earlier this week, and somewhat predictably, the Astros and Dodgers nearly came to blows in their first meeting since news of the scandal broke.

Although the two teams failed to practice proper social distancing amid the fracas, no punches were actually thrown during the game Tuesday night.

Kelly was suspended for eight games by MLB on Wednesday in response to the incident. 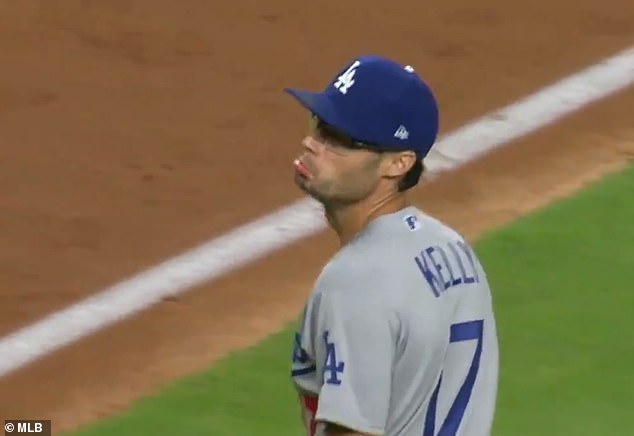