A Texas sheriff has fired a deputy who fatally shot an unarmed black man during a confrontation in Houston.

Harris County Sheriff Ed Gonzalez announced Friday that Deputy Cameron Brewer, who is black, was being fired for failure to follow the department’s use-of-force policy in the March 22 fatal shooting of 34-year-old Danny Ray Thomas.

In doing so, Brewer chose not to use his Taser first in an effort to subdue Thomas.

Thomas was shot dead in a confrontation captured on police and civilian video.

Thomas had his pants around his ankles and was unarmed as he advanced toward Brewer, despite warnings to stop. 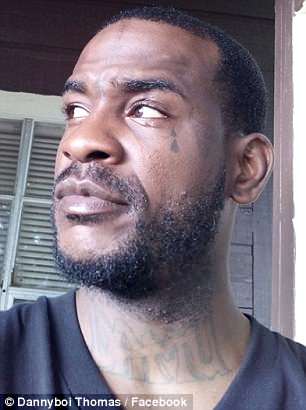 A Texas sheriff has fired Cameron Brewer (above), a deputy who fatally shot an unarmed man during a confrontation in Houston. The victim, Danny Ray Thomas, 34, is seen right

Harris County Sheriff Ed Gonzalez announced Friday that Brewer, who is black, was being fired for failure to follow the department’s use-of-force policy in the March 22 fatal shooting of Thomas

Thomas’ family is suing the county for wrongful death.

Cellphone and dash cam video of the moments leading up to the shooting surfaced earlier last month.

The cell phone video, obtained by the Houston Chronicle from a civilian witness, does not show the actual shooting because a car passes in front of the cellphone camera as the Harris County deputy fired a single shot.

Harris County officials also released dash cam footage showing Thomas in a confrontation with a motorist just before he was killed.

Thomas had an object in his hand, but no weapon was recovered at the scene, according to the sheriff’s office.

Family members said Thomas had been devastated after two of his children were killed in 2016.

The children’s mother is accused of drowning them in a bathtub.

Officers were responding to reports that a man was walking in the intersection with his pants down, hitting cars as he mumbled to himself.

Before Brewer, a motorist had stopped in the intersection to confront Thomas.

Brewer broke up the altercation and can be seen in the video walking backward away from Thomas with his gun drawn, shouting commands at Thomas.

He can be seen telling Thomas to stop walking and get down, but Thomas continues to approach the deputy.

A gunshot can be heard on the video, but can’t been seen. 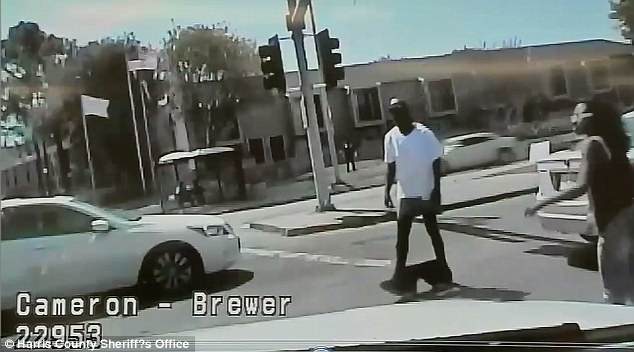 Cellphone and dash cam video of the moments leading up to the shooting surfaced earlier last month. Thomas is seen with his pants down around his ankles as he approaches Brewer, who is not seen in the image above 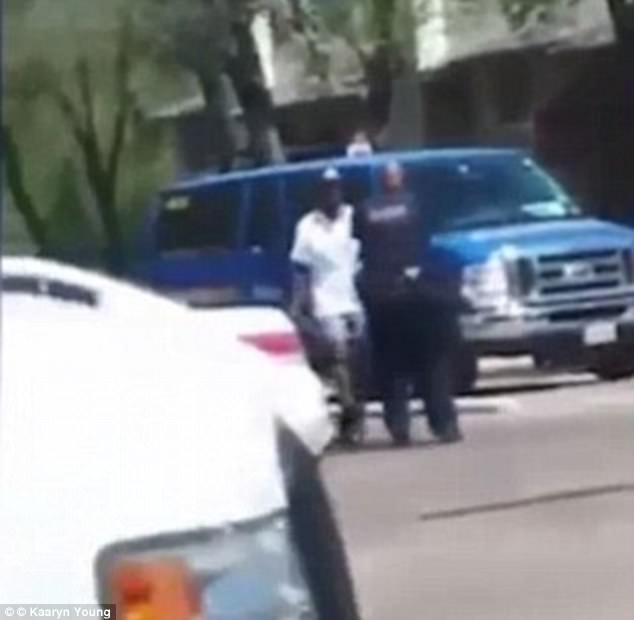 Brewer is next seen on the video crouching over Thomas, who is face down on the pavement.

The American Civil Liberties Union of Texas issued a statement calling on the sheriff’s department to release any dash cam and body-camera footage in the shooting and for the department to review its use-of-force policies to ‘demand lethal force only be used as a last resort.’

‘It’s difficult to imagine how this shooting could possibly be justified. We must demand that our law enforcement agencies, who are sworn to protect our communities, be held accountable whenever deadly force is used unlawfully,’ Sharon Watkins-Jones, director of political strategies of the ACLU of Texas, said.

‘But whatever the excuse, another unarmed black man has been killed by law enforcement, in the street and in broad daylight, and the only reason we know about it is because of bystander footage.’

Thomas’ sister, Kita Thomas, said she and her brother both suffered depression and helped each other survive recent events.

According to court records, Sheborah Thomas, the mother of Danny Thomas’ children, is facing two capital murder charges for allegedly drowning their 5-year-old daughter and 7-year-old son in a bathtub before hiding their bodies under a neighbor’s house in August 2016.

Court records show Danny Thomas was serving a prison sentence for a drug-related offense when the children were killed.