How $2000 could be sitting in your driveway: Aussies could make thousands by just sitting at home

How to turn your driveway into $2,000: Cash-strapped Aussies can make thousands every month from their cars and homes – here are a finance expert’s top tips

Australians struggling to make ends meet and looking for extra ways to make money should start by looking out the front door at their car and driveway, a financial expert advised.

The Today Show’s regular finance advisor Effie Zahos said people could earn thousands of dollars of extra income every month by considering renting a room in their house, a car space on their driveway, or their car to another user.

That figure could be even higher if you live in the inner city or certain parts of Australia.

Renting out a room in your house or apartment could bring up to $909 a month in Sydney, $756 in Melbourne and $774 in Brisbane

The finance guru used figures generated by an AirBnB calculator which showed that renting out a room in your house or apartment could bring up to $909 a month in Sydney, $756 in Melbourne, $774 in Brisbane and nearly a $1000 a month in Darwin.

Zahos warned that income from renting a room would be taxable.

Renting car space in your driveway, carport or garage could also earn up to $200 a month.

Figures from Parkhound, an online car space booker, show that Australians who live in a capital city can earn an average of $183 per month, with a car space in Melbourne costing around $180 a month, $170 in Brisbane and $200 in Sydney.

‘You can get more if [the car space] is covered,’ Zahos said. ‘And inner city is probably better but even if you’re near a railway or a hospital, you’ll have in-demand car spaces.’

The founders of Parkhound, Robert Crocitti and Michael Nuciforo, came up with the idea in 2013 while trying to find a park to attend the football at the MCG and seeing empty spaces in the driveways of nearby houses.

Renting out your car through car sharing platforms such as Car Next Door was another potentially lucrative option, particularly now that many corporations had dispensed with fleets of company cars.

In Tasmania the government is currently offering grants of $1,000 to car owners who hire out their private vehicle in a bid to overcome a chronic shortage of hire cars in the state. 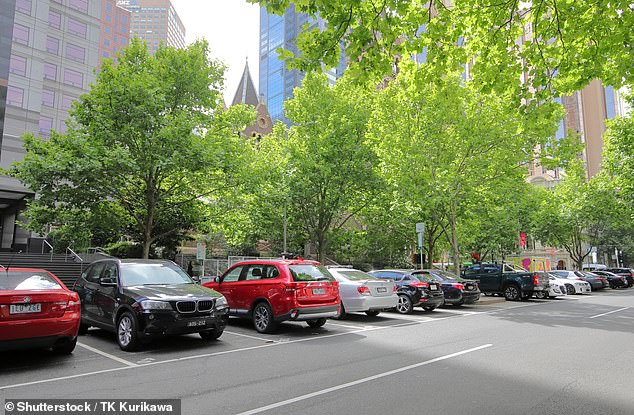 More than half the fleet of hire cars in Tasmanian were sold off as a result of COVID-19 closures in 2020 but the return of tourists meant demand was now well ahead of supply.

Car Next Door figures showed people could earn an average $571 per month from hiring their private car, with up to $1000 in Brisbane and up to $1900 in Tasmania.

Zahos noted that people needed to check the status of their comprehensive insurance policy and whether they were legally covered should another driver incur a speeding fine while driving a private car.

Most hire car platforms cover the owner for insurance while the vehicle is being used by someone else.