How a 75-year-old arthritic granny competes in Ironman competitions

It was pitch black on an empty motorway in Kailua-Kona, Hawaii, in October 2010. I plodded along, a torch strapped to my head to light the way, the finishing line of the annual World Ironman Championships just six miles ahead.

The event – a 2.4-mile swim in open water, followed by an agonising 112-mile bike ride, then a full marathon – is a gruelling test of human endurance for any mortal. But I was 67, one of the contest’s oldest-ever competitors.

The final stretch was unbelievably isolated. Those remaining were all at their limit. And I was sobbing, remembering my beloved husband Phil, who had died of cancer 16 years previously. Was he up there supporting me? Was his legacy my fighting determination to get to the end of the race and make the most of my life?

Edwina Brocklesby, 75, completed a 2.4-mile swim in open water, followed by an agonising 112-mile bike ride, then a full marathon – is a gruelling test of human endurance for any mortal in 2010 aged 67 in 15 hours, 41 minutes and 22 seconds 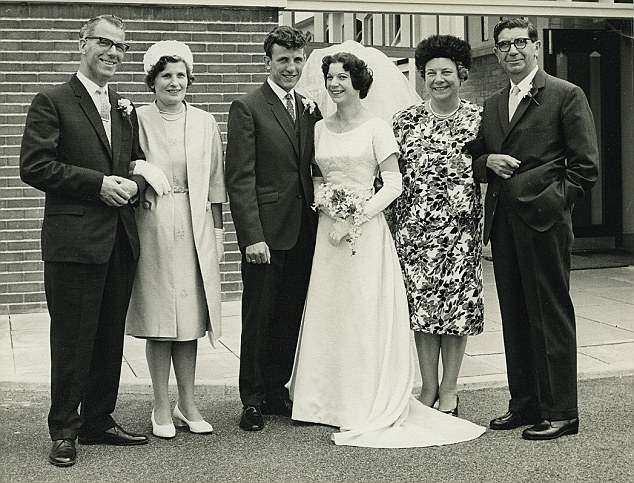 Edwina, pictured here with her husband Phil in 1964 on their wedding day, said he prompted her to start running at the age of 50

As I approached the finishing line after 15 hours, 41 minutes and 22 seconds, and my thoughts turned to a much needed glass of wine, an enthusiastic commentator shouted: ‘You are a 67-year-old social worker Ironman!’ Afterwards, texts of congratulations started to flow in – and then they abruptly changed tack. ‘We’ve just seen you in Spooks!’ one said.

It seems that a segment of the BBC spy drama included footage of a runner training on a Thameside footpath – and that runner turned out to be me. Wow.

I was a Kona finisher but more impressively, I had just appeared in Spooks.

Without a shadow of a doubt, it was Phil who inadvertently pushed me into running at the age of 50 – and it was running that sustained me through my grief after he died.

Today, at 75, I’ve tackled six Ironmans, seven triathlons, five duathlons and seven London Marathons. But when I took my first tentative steps towards a sportier life, I was a typical stressed-out mum, living just outside Northampton with Phil and our teenage children – Steve, Gary and Kate. I ferried them around and worked long hours as a social worker. 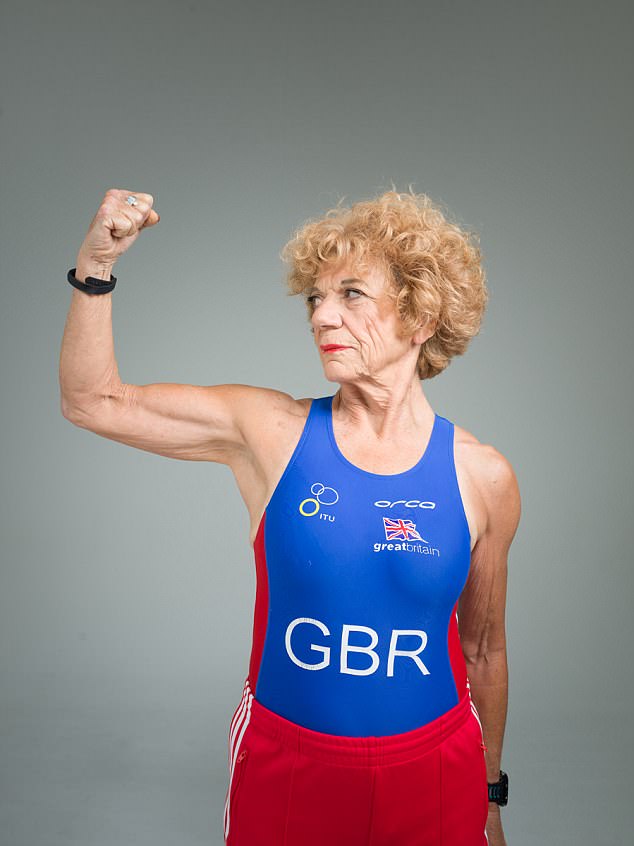 Since then, she has tackled six Ironmans, seven triathlons, five duathlons and seven London Marathons

I’d spend hours on the cold sidelines watching their football matches and I had taught all of my kids to swim. I certainly didn’t have time for exercise myself, and neither did I have any interest in it. I’d always been a tiny bit overweight and I’d get out of breath walking up the stairs. Who didn’t at my age? It didn’t bother me in the slightest.

But one day, after a friend told me about the potential effects of the menopause on my bone strength, I told Phil that I was contemplating running a half-marathon.

‘You couldn’t run all the way to Northampton, let alone a half-marathon,’ he joked. It was the only motivation I needed. My response was a life-changing: ‘Oh yes I will!’

I started training the next day and I quickly grew to love it. The ever-changing wild flowers, the trees, the smells, the wind and the rain, and the peace. I could go out, highly stressed, profoundly affected by the pain of some of the children and parents with whom I was working, and come back somehow feeling stronger emotionally and more able to manage.

By 1994, aged 51, life was good. We had a lovely home in a great village with a strong community and even a local running club; Phil had reached the top of his tree professionally; I was happy as an independent social worker for children who were the subject of court proceedings; and our own children were all thriving.

Phil’s cancer came on so quickly. He had surgery to remove a tumour in his colon just before our 30th wedding anniversary, but by November 1994 we were told the cancer had spread to his pancreas and he had less than six months to live. In fact, he had only three weeks.

I can still remember our final awful, desolate, sleepless night together: just the two of us as Phil drifted in and out of consciousness. At 1pm, after one final big hug, it was over. I resolved then to make the most of the future

RUNNING THROUGH THE GRIEF

I tried counselling but running with my friends, I decided, was better therapy. When running in a small group, you can distance yourself, tears flowing, or let someone else do the talking, particularly when going up hills. I owe them so much. Everyone needs a way to channel their grief – running became mine.

When I moved to the capital, to be closer to the children, I ran the 1996 London Marathon.

My first Ironman, in Lanzarote in 2009, came when I wanted an even greater challenge.

I loved the island and its breathtaking volcanic scenery. At 66, I was the oldest competitor they had ever had. 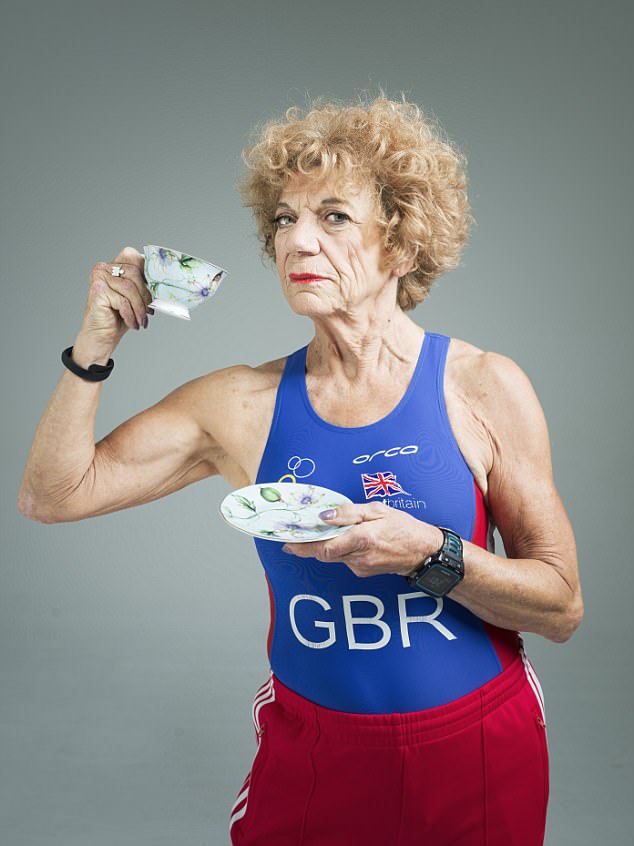 There have been many more Ironman competitions around the world since then, and I have suffered my fair shares of injuries. I’ve torn the ligaments in both knees, I have arthritis, and I’ve had surgery for a ruptured appendix. In hospital, a junior nurse would check my heart rate and pulse, only for it to be checked minutes later by her senior. My low heart rate didn’t fall within the normal range for my age because I was so fit.

I was surprised as I’d never been driven by a sense of wanting to perfect or improve my body. But my hair continues to grow strongly and people tell me my voice sounds younger than my years. I obviously still have plenty of energy. To preserve my arthritic knees, a doctor recommended I stopped running altogether. It was devastating news. But thanks to a brilliant physio, I can still run, swim and cycle without any pain.

Being active has given me an incredible way to see the world. And I wanted to give something back, which is why I set up the award-winning Silverfit charity in 2013, with the aim of promoting physical activity and socialising for older people.

Physical inactivity is the greatest killer of people of my age – and indeed younger – as it’s a precursor of illness and dependency.

If I can start to run at 50 and become the oldest British woman to complete an Ironman, everyone should realise it’s never too late.

I work out in the gym two or three times a week – a mixture of strength training, balance exercises and rowing.

For 30 years, I’ve started my day with lemon juice in hot water, cod liver oil and vitamins, and always an egg and some peanut butter for breakfast. These are supplemented with caffeine gels to keep me going during exercise, and protein shakes for afterwards.

I measure my steps every day because I’m in competition with my kids, who are now in their 40s and 50s. It’s a very serious competition and I’m not doing badly – I think I’m second or third at the moment. I’m still having fun.

I am not sure they – or my grandchildren – anticipated the embarrassment. Asked what makes me crazy, the youngest one, aged 12, said: ‘You do something that a 30-year-old would do.’

Even turning 70 in 2013 didn’t slow me down. My latest Ironman competition was in Mexico last year. As I crossed the line, the commentator announced: ‘Eddie Brocklesby, at 74 years the oldest woman, all the way from London, you are an Ironman. You are an Irongran!’ 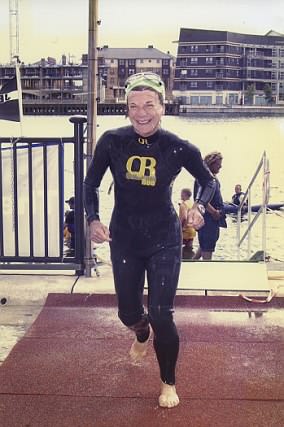 All you need to get active is a comfortable, flat pair of shoes and whatever you feel happy wearing. You don’t need a full Lycra sports outfit and you don’t even need ‘proper’ trainers – I use Primark for their wide fittings! The important thing is for you to feel comfortable.

It’s about getting active, not running a marathon on the first day. What you do doesn’t even have to be ‘sporty’ – you could just walk to the shops rather than drive; do some stretches in your chair; or stand in a bus queue on one leg. Walk around with some tins of baked beans for strength training, or just do some light gardening. Even a small amount of effort will make you feel good.

Aim to get a little bit out of breath, but don’t push yourself too hard. You want to feel as if you’ve made an effort and raised your heart rate, but you don’t want to end up feeling so exhausted that you’ll never do anything again. You should be enjoying yourself.

4 Take it step by step

It’s important to have something to aim for to stay motivated. Time yourself walking around the lake in the park and aim to do it quicker in six months’ time. Buy a simple step-counter (or you may already have one on your smartphone) and compete with friends or relatives to see who can walk the furthest in a day.

Rope in a friend, or join in local group activities such as Nordic walking (walking with poles), Pilates or swimming classes. Whatever it is, make sure you pick something you enjoy doing or you may not keep it up. At my charity Silverfit, we find the social side is what keeps people coming along, and it’s important for mental health too.