It is a pretty unfashionable way to spend your spare time, fitting falling coloured bricks into a wall on an electronic screen.

But when it comes to winding down after a tough day at work, playing Tetris may work better than trendy mindfulness.

Researchers pitted a Tetris-style arcade game against the meditation technique practised by Angelina Jolie and Emma Watson to see which was most effective in relieving everyday stress.

People who were asked to play 10 minutes of the wall-building game on their smartphones after work showed more signs of recovery from their day.

They felt more relaxed than after 10 minutes of mindfulness, which involved focusing on their breathing and the feeling of their body.

In a second experiment, asking people to play the computer game after a strenuous task solving mathematical equations, people felt far less tired than after using a trendy mindfulness app.

Experts now say mindfulness may be no use in fighting burnout, while a game of Tetris really does immerse people and help them forget about work.

Professor Anna Cox, a co-author of the study from University College London, said: ‘It may be just differently shaped bricks dropping down, which someone is trying to fit into a space, but a game like Tetris is simple to play and does not take much time.

‘We need to stop making people feel bad about playing games on their smartphones because they can really help people detach from work and relax.’

The study, published in the journal JMIR Mental Health, recruited 41 people who were asked to play a game similar to Tetris called Block! Hexa Puzzle or to spend time on a mindfulness app when they got home from work. 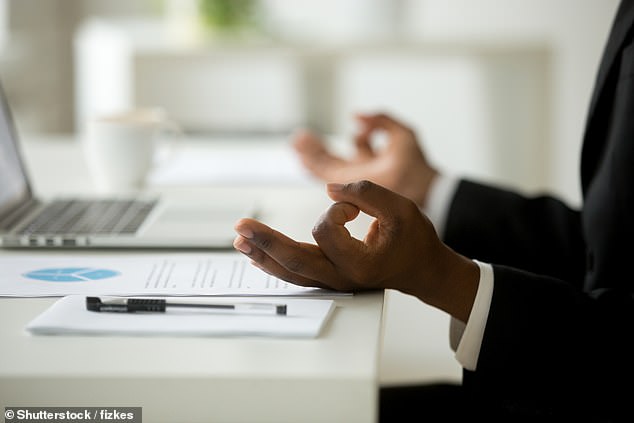 Professor Anna Cox, a co-author of the study from University College London, said: ‘We need to stop making people feel bad about playing games on their smartphones because they can really help people detach from work and relax’

Activities which help people feel relaxed, detached from work, in control and like they are learning something new are known to help them recover from the working week.

These signs of recovery increased over the five days from Monday to Friday in those playing the computer game.

But they fell away in people who practised mindfulness, based on questions such as whether the activity felt like a ‘break’ from work or felt like ‘leisure’.

The second experiment gave 20 people a series of maths equations, then looked at whether the Tetris-style game, the mindfulness task or a simple spinning toy made them feel less fatigued.

Based on ratings of feelings such as ‘tiredness’ and ‘tenseness’, the brick-building game did improve energy levels while mindfulness and the toy did not.

The researchers say a smartphone computer game appears to work over time, particularly in people who are highly stressed and enjoy such activities.

One of the people in the study, quoted by researchers, said: ‘Even if you had a lot racing through your mind after a busy day at work, it was a good way to actually switch off from that, and once you’d finished the game, you felt as if you were actually relaxed and actually out of that work zone.’

Lead author Dr Emily Collins, of the University of Bath, who started the research while at UCL, said: ‘To protect our long-term health and wellbeing, we need to be able to unwind and recuperate after work. Our study suggests playing digital games can be an effective way to do this.’