How a savvy criminal tried to steal $160,000 from this Australian couple

How a savvy criminal almost stole $160,000 from a couple after taking just one item from their mailbox – and it could happen to anyone

A couple were nearly bankrupt by scammers who applied for five different credit cards in their name after stealing a single driver’s licence.

Sandy and Simon, from Melbourne, were close to losing $160,000 after a tech-savvy thief stole person details from their mailbox.

Simon’s licence was taken from the couple’s mailbox and used to apply for five credit cards at five different banks, all with between $30,000 and $60,000 credit.

‘It’s very unnerving when you don’t feel safe in your own home,’ his terrified partner Sandy told 7News.

‘It seems far too easy to get a credit card online without thorough checks,’ Simon added.

Experts warned that the scam often goes undetected until people receive demands for repayments in the post.

The couple were only saved from financial ruin when their existing bank noticed the contact details on a credit card application were different from what it held on file.

All applications have since been cancelled.

Fortunately, all the applications have since been cancelled and the couple’s mail was suspended.

‘People don’t often realise it’s happened until they start getting demand letters for the money that’s been taken and hasn’t been paid back,’ cyber safety expert Susan McLean said. 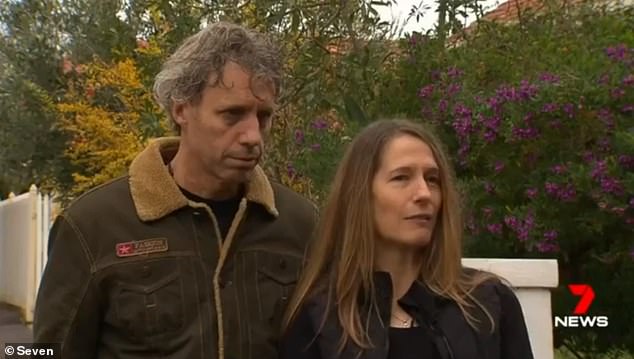 Sandy and Simon (pictured) were nearly duped out of $160,000 after a scammer applied for credit cards under their name

The surge in credit card fraud, identity fraud and scams is often the result of mailbox theft.

Mailboxes have become an easy target for thieves, with some even using master keys to access the mail of every residence in an apartment block.

A driving licence is an easy way for scammers to get enough personal details to apply for credit cards, as it contains a person’s name, date or birth and postal address.

This is enough to apply for a credit card at many banks.

The scammers then come back to the mailbox to pick up the new credit cards, all without the real owner finding out until a bill arrives.