Rebecca Strum also saw her family infected with the Delta variant of Covid-19, including her partner Simon, who at one stage was also hospitalised as he ‘couldn’t see’.

Speaking to Today, Mr Strum recalled the frightening experience alongside his 14-year-old son Jason, who was contacted by NSW Health and informed he was a close contact of a known case and needed to get tested immediately.

‘He was (Covid) positive by the Monday. Jason didn’t seem so sick. But then by Tuesday, I started getting sick,’ he said.

‘Within a few days, I ended up in hospital. It built up and got worse. I was up all night shivering, sweating, coughing.

‘I was then told I needed to go to hospital because I couldn’t see. That is when it started getting serious.’

Mr Strum’s partner was advised to get tested, as she was also a close contact.

The Strum family are now all recovering, and had a message for Australia – get vaccinated.

‘They told me if I had the jab, my symptoms wouldn’t have been as severe,’ he said.

On Saturday, Sydney recorded 163 new coronavirus cases on with 45 infectious in the community.

The latest cluster, which began in Bondi after an air crew driver tested positive on June 16, skyrockets to 1,951 with Saturday’s announcement.

‘Very worryingly, 45 were infectious out in the community,’ Mr Hazzard said. 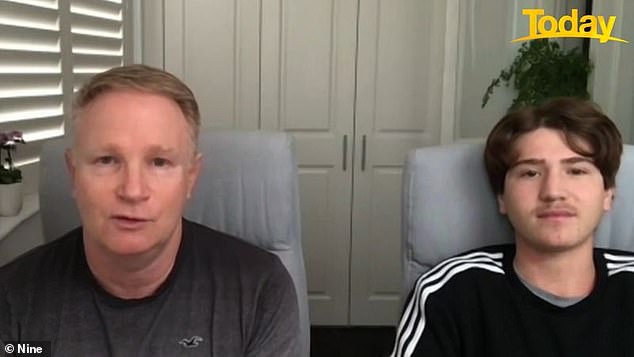 ‘In other words, 45 people were out walking around and potentially spreading the virus which certainly explains why our numbers are going up.

‘What it is telling us is we have a continuing and growing problem, particularly in south-west and western Sydney.’

The Health Minister also confirmed a man in his 80s from south-western Sydney died in Liverpool Hospital on Friday.

In a concerning sign of the times, military checkpoints could soon be introduced in Sydney’s Covid ‘red zones’ in an attempt from the NSW government to limit the outbreak.