He died in a pool of blood with three bullets in his body, but Kumanjayi Walker’s life unraveled years before he embedded a pair of scissors into a young cop’s arm.

The Aboriginal teen, 19, was shot dead while resisting arrest in Yuendumu, 290km north-west of Alice Springs on November 9, 2019.

He was shot three times by Constable Zachary Rolfe, 30, who last week was found not guilty of murder, manslaughter, and engaging in a violent act causing death by a Northern Territory Supreme Court jury.

Those are the facts, as found by the court, but for his short life leading up to that point, Mr Walker led a troubled existence.

Given how his life was shaped before he was even born, many might say he never had a chance – but his girlfriend Rickisha Robertson was never given a chance by him either, with the horrific violence he allegedly inflicted on her.

Kumanjayi Walker (pictured), 19, who was shot dead by police in Yuendumu, NT on Saturday, November 9, 2019

Mr Walker was born in Alice Springs Hospital on October 13, 2000, to a mother, Selina Lane, who was a petrol sniffer and drank heavily while pregnant with him.

She very quickly gave the baby then known as Arnold to Leanne Oldfield and Sampson Anthony who raised him in an environment of ‘alcohol abuse and severe domestic violence’.

Ms Oldfield was friends with Mr Walker’s biological parents but was not related to either of them.

In April 2001, when he was six months old, he was living with his foster parents at a town camp on the edge of Alice Springs, while his maternal and paternal relatives were fighting over who should look after him.

The dispute also involved Ms Oldfield, with allegations of alcohol abuse and ‘filthy’ living conditions being thrown about.

By September 2002, just before his second birthday, Arnold – who was also sometimes known by his middle name Charles – was being cared for by a grandmother but had ear and chest infections, nits, and scabies.

During his early childhood, Arnold also spent time with two other families, before moving to Adelaide with Ms Oldfield and Mr Anthony in 2007.

There he went to McFarlane Primary School until 2010, where teachers recognised him as having ‘special needs’. 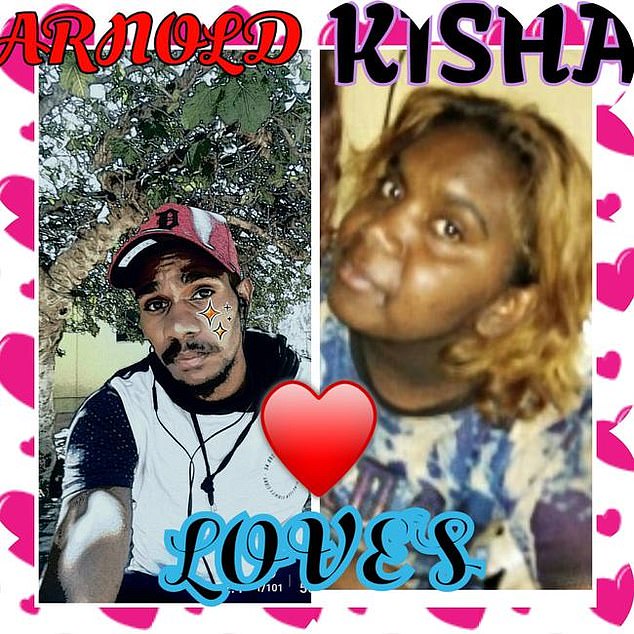 In 2010, Ms Oldfield left Adelaide and took Arnold with her to Yuendumu in the NT.

Mr Anthony followed later, but ended up in prison in Darwin, where he died in 2014.

By the age of 11, Arnold was committing break-ins. Aged 12, he was enrolled in the government-funded Mt Theo Program that aims to divert troubled indigenous youth away from crime and substance abuse.

The program’s coordinator Kerri-Anne Chilvers recorded that he was a ‘dysfunctional child with poor impulse control and inability to control his emotions’.

After a trip back to Adelaide followed by another return to the NT, Arnold was reenrolled at Yuendumu Primary School in October 2013, but his attendance was ‘extremely low’ and the principal there also believed he had ‘special needs’.

Soon after returning to Yuendumu he was regularly drinking alcohol and smoking marijuana.

In April 2014 he broke into the Yuendumu Medical Clinic and an early childhood learning centre, causing an estimated $130,000 worth of damage. 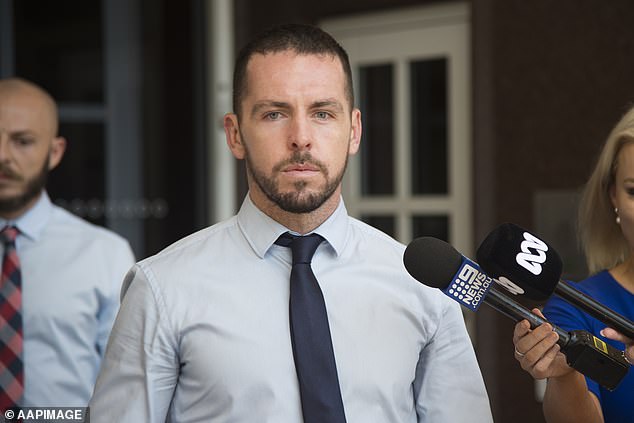 Zachary Rolfe (pictured) leaves the Supreme Court of the Northern Territory in Darwin on  Thursday, March 10, 2022 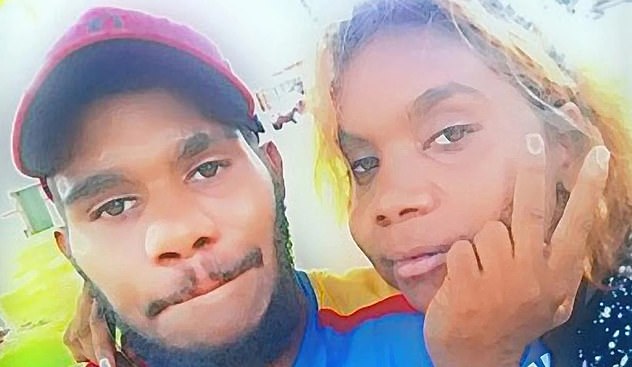 Kumanjayi Walker (left) and his girlfriend Rickisha Robertson (right). Mr Walker was killed by police in the NT in 2019

The clinic is the same one from where staff were evacuated, due to their fear of break-ins, on the morning of Mr Walker’s shooting death in November 2019.

In 2015, after he moved in with his grandmother Margaret Brown at Yuendumu, he met Rickisha Robertson, who became his girlfriend.

He would later allegedly beat her head with a rock and punch, kick and choke her, and one time bashed her with a piece of steel, breaking her left hand.

But Ms Robertson blamed herself. ‘It was really hard that he was assaulting me but he always said “I forgive you”,’ she told The Australian.

‘I’m the one who was getting into his way. I was trying to stop him from… getting mad at me.’

Mr Walker continued to get into trouble with the police and his neighbours. He got into fights, stole cars, and damaged property.

He again moved to other areas and was enrolled in other programs seeking to help him. But nothing worked. 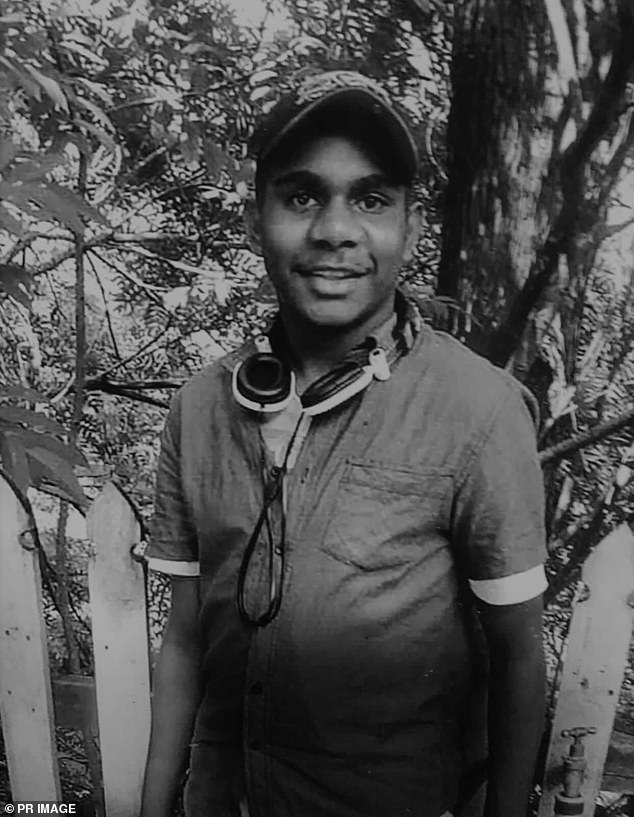 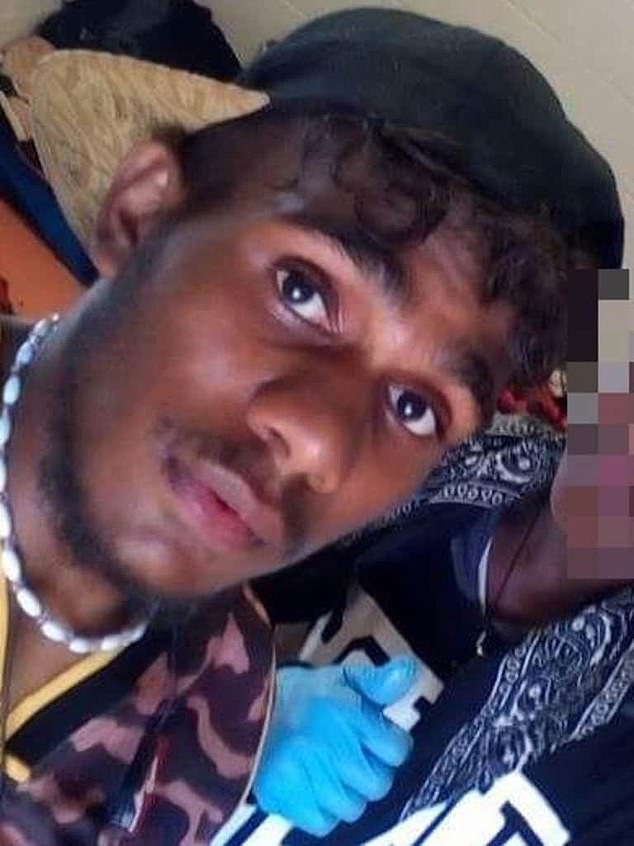 He had no interest in finding a job and spent his days watching TV and smoking. On Facebook accounts he posted photos of himself posing as a gangster.

On two occasions he cut off electronic monitoring devices while out on bail, leading the police to try to contact Ms Robertson to warn her he could be looking for her.

On Tuesday November 5, 2019, a warrant was issued for his arrest for breaching his suspended sentence.

On November 6, an attempt to arrest him led to Mr Walker chasing two police officers, armed with an axe.

But the officers did not draw their guns. Instead, they let Mr Walker run from his Yuendumu home into the bush, saying they wanted to de-escalate the situation.

On November 9, he was shot dead while resisting arrest in Yuendumu.

Constable Rolfe fired three shots at the teen, after the young man stabbed the officer in the shoulder with a pair of scissors.

He was found not guilty of all charges and his father, Richard Rolfe, called for the removal of the NT Police Commissioner Jamie Chalker from his position.

Richard Rolfe said he’s ‘incredibly proud’ of his son Zachary, who was found not guilty of the murder of Kumanjayi Walker.

Constable Rolfe wants to return to the police but after the verdict, the Northern Territory Police Force stood him down again pending a further inquiry.

Richard Rolfe did not forget Mr Walker’s family, nor the local community, in his interview.

‘It’s been traumatic for many, many people,’ he told 2GB radio.

‘It’s been traumatic for the Walker family, the Yuendumu community, the entire Northern Territory Police Force.

‘It’s been very, very divisive, and the reason it’s been so divisive is because the Police Commissioner (Jamie Chalker) has tried to make it divisive by lying continually to the Yuendumu community.’

Richard Rolfe called for the removal of Commissioner Chalker from his position.

He said his son and his family never heard from the police commissioner to check on their welfare during the murder trial.

‘We have never, ever heard from one of his (Chalker’s) current commissioned officers to check on the welfare of Zach or his family,’ Mr Rolfe said.

‘A true leader would be there to look after their staff.’