It was one small step for a man, one giant leap for mankind and just one little stumble away from disaster.

The broadcast of the moon landing was the most dramatic television broadcast of all time and it was a small group of Australians working under extreme pressure who made it a success.

Man first walked on the moon 50 years ago this month and for almost half that time two Australian scientific teams could not agree over who first beamed those historic images around the world.

It was one small step for a man, one giant leap for mankind and one little stumble away from total disaster. Astronaut Buzz Aldrin is pictured walking on the moon near the lunar module 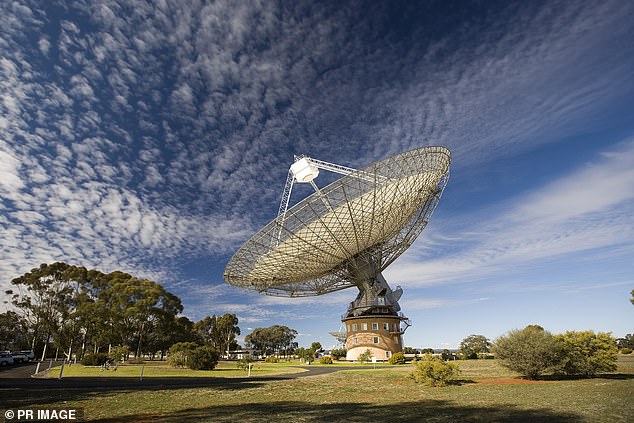 The broadcast of the moon landing was the most dramatic television broadcast of all time and it was a small group of Australians working under extreme pressure who made it a success. Pictured is the CSIRO’s radio telescope at Parkes in central western New South Wales 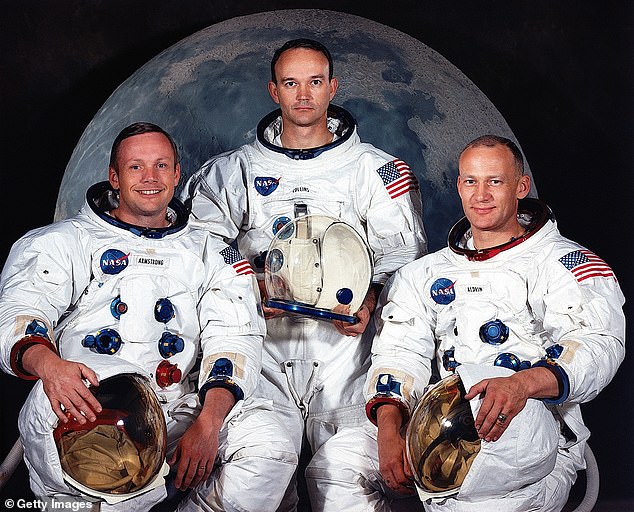 Neil Armstrong (left) was the commander of the Apollo 11 mission which landed on the moon in July 1969. Michael Collins (centre) was command module pilot and Buzz Aldrin (right) lunar module pilot. President John Kennedy had vowed in 1961 the US would put a man on the moon

Management of the tracking stations at Parkes, in central western New South Wales, and Honeysuckle Creek, near Canberra, each wanted to claim the honour.

The Parkes Observatory is run by Australia’s Commonwealth Scientific and Industrial Research Organisation (CSIRO) and Honeysuckle Creek was a NASA-led facility.

The release in 2000 of the popular Australian film The Dish, which portrayed a dramatised version of the Parkes radio telescope’s role in the operation, further muddied the truth.

The first grainy images of Neil Armstrong setting foot on the moon were sent out to 600million viewers around the world – one fifth of humanity – from the 26-metre antenna at Honeysuckle Creek.

Parkes soon took over and transmitted better quality coverage of the rest of the moon walk from its 64-metre satellite dish.

But a fire in the power supply of the transmitter at Tidbinbilla two days before the landing stopped it playing any role in the telecast. 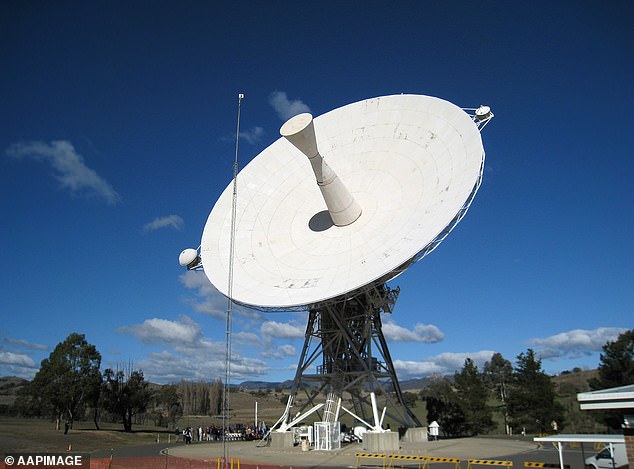 The first grainy images of Neil Armstrong setting foot on the moon were sent out to 600million viewers around the world – one fifth of humanity – from the 26-metre antenna at Honeysuckle Creek. That satellite dish is pictured after it was relocated to Tidbinbilla, outside Canberra 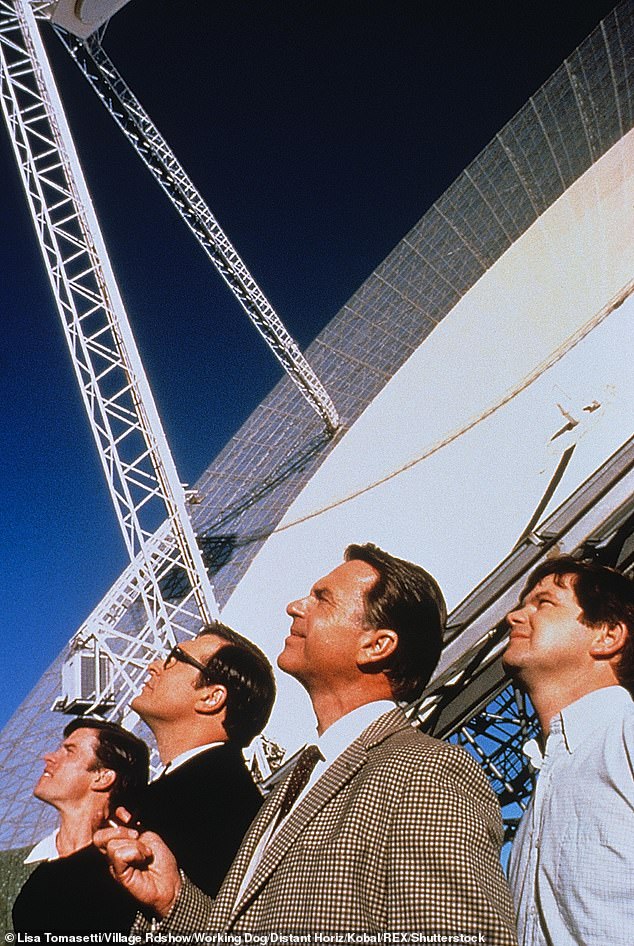 The release in 2000 of the Australian film The Dish, which portrayed a dramatised version of the Parkes radio telescope’s role in the moon landing broadcast, further muddied the truth. Pictured left to right are actors Tom Long, Patrick Warburton, Sam Neil and Keith Harrington

Backup plans were formulated for every other conceivable problem.

Staff at Parkes were taught how to manually move the dish and switched to diesel power during the operation in case of an electrical mains dropout.

NASA had wanted to use its American station at Goldstone in California’s Mojave Desert to transmit the moon landing but in all the excitement someone there forgot to flick one switch.

That error and other unforeseen circumstances meant that a mission which had been years in the planning had to be adjusted in its final minutes.

The Eagle lunar module had overshot its intended landing spot by about 6 kilometres and was headed for a boulder field before Armstrong took manual control and set it down on the Sea of Tranquility.

There was only about 30 seconds of fuel left in the Eagle. 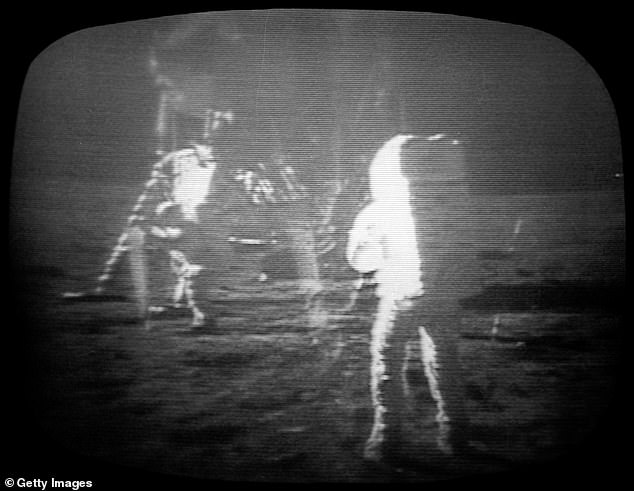 NASA had wanted to use its American station at Goldstone in California to transmit the moon landing but in all the excitement there someone forgot to flick one switch. Pictured is a screen grab from a CBS News special report showing the lunar module on the surface of the moon 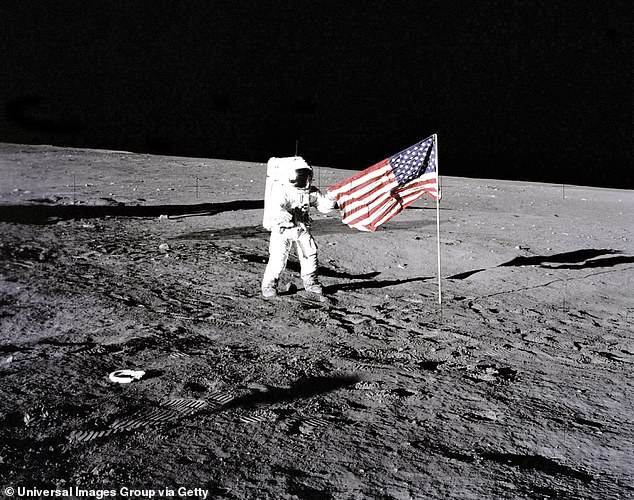 Having first walked on the moon in July 1969, American astronauts were back on the lunar surface in November that year. Pictured is Apollo 12 commander Pete Conrad with the US flag

Armstrong’s biomedical data, which was being monitored at Honeysuckle Creek, showed his heart rate peaked at 112 beats per minute as he stepped onto the moon.

[The normal resting heart rate for a human ranges from 60 to 100 beats per minute].

That step fulfilled half of a momentous goal set by President John Kennedy in 1961 – ‘before this decade is out, of landing a man on the Moon and returning him safely to the Earth.’

Armstrong’s first job when he left the landing module was to turn on a camera facing the Eagle’s ladder, which he did.

Waiting to receive that weak signal were the technicians in California but as Armstrong began his descent the pictures Goldstone sent to mission control in Houston were upside down.

Glen Nagle from the Canberra Deep Space Communication Complex at Tidbinbilla recently explained what happened next to James Carouso, the US deputy chief of mission in Australia.

‘Hundreds of thousands of people working on the Apollo missions, millions of people around the world waiting to see it on television, and they’ve got an upside down picture,’ Nagle said. 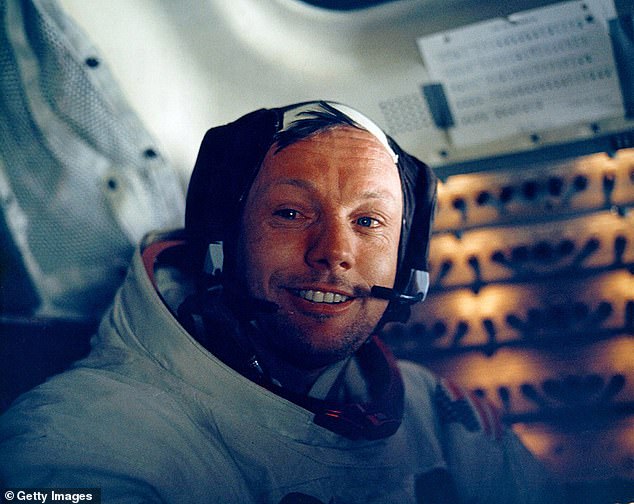 Apollo 11 commander Neil Armstrong is pictured inside the the Eagle lunar module shortly before he became the first man to walk on the moon. Armstrong was followed by Buzz Aldrin

‘So they need to find another picture and fast. Neil’s already coming down the ladder – he’s not going to wait for anybody.

‘So, NASA looks to Australia. We kind of came to the rescue.

‘They went to Honeysuckle, they had a picture, it was a great picture and it was the right way up.

‘They flicked the switch just in time so that 600million people around the planet could watch Neil taking those final few steps down the ladder to plant his left foot on the surface of the moon.

‘And of course to utter those immortal words.’

‘It was that little dish at Honeysuckle Creek which was the smallest dish in all the world playing a role in Apollo 11 mission that actually got those first pictures and broadcast them around the planet.’

Parkes, Honeysuckle Creek and Goldstone all received and transmitted images that day and there are still some minor discrepancies about exactly what happened when. 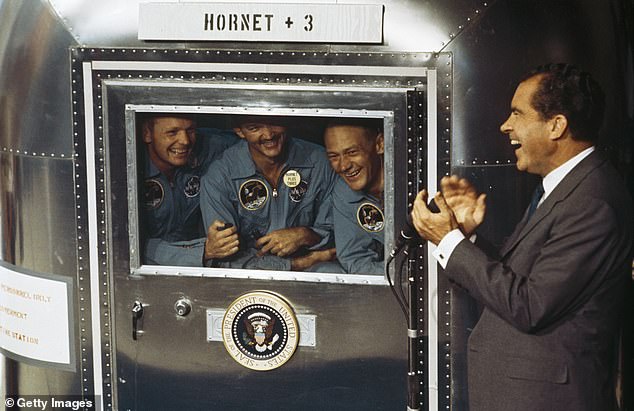 Eight and a half minutes after the first images from Honeysuckle and Goldstone went out, NASA switched to the television signal being received by the Parkes radio telescope.

Parkes provided images for the following two hours and 12 minutes of live broadcast as Armstrong was joined by Buzz Aldrin and the pair explored the moon’s surface.

‘While the Parkes telescope successfully received the signals, the occasion didn’t go without a hitch,’ the CSIRO website states.

‘The lunar module had landed at 6.17am AEST. Astronauts Neil Armstrong and Buzz Aldrin were supposed to rest before the moon walk, but Neil Armstrong was keen to get going.

‘The astronauts were slow getting into their suits and when they got outside the moon was rising over Parkes.’

During the flight to the moon and while the astronauts were in orbit the weather at Parkes had been perfect.

Then suddenly one violent squall threatened to ruin months of work. 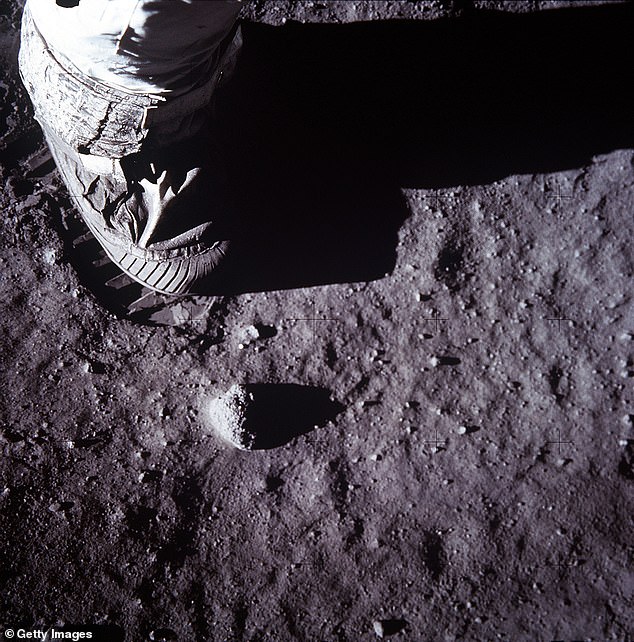 A close-up view of an Apollo 11 astronaut’s boot and footprint on the moon’s surface is photographed with a 70mm lunar surface camera. Twelve men have walked on the moon

‘The telescope was fully tipped over, waiting for the moon to rise, when a series of strong wind gusts – 110 kilometres per hour – hit,’ the CSIRO states.

The telescope was suddenly subjected to the worst barrage of bad weather in is history – wind forces ten times stronger than what was considered safe.

‘They made the control room shudder, and slammed the telescope back against its zenith axis gears.’

Aldrin photographed that storm from the moon.

Fortunately the wind slowed but the weather was still poor and the Parkes telescope operated well beyond its safety limits for the duration of the moon walk.

NASA network officer Ernie Randall said during the Apollo 11 TV transmission: ‘Pass on to the Parkes people that their labour was not in vain, they’ve given us the best TV yet.’ 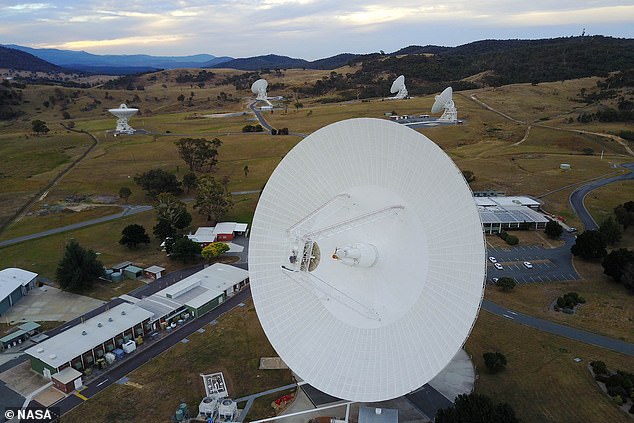 The TV signals received by Parkes were sent to Sydney then were split. One was sent to the Australian Broadcasting Commission and one to Houston for the international telecast.

‘The international signal had to travel halfway around the world from Sydney to Houston, adding a delay,’ the CSIRO states.

‘So Australian audiences saw Neil Armstrong’s historic first step 0.3 seconds before the rest of the world.’

There was too much work going on for any major celebration in the tracking stations. Armstrong’s first steps on the moon were met with cheering but that was about it.

The scientists working at the tracking stations did not even have the best view of what was happening up on the moon.

Staffer Neil ‘Fox’ Mason, who was at the control desk guiding the Parkes telescope, could not turn around to watch the incoming pictures.

Instead, Mason had to continually monitor the telescope’s tracking in case the weather worsened. 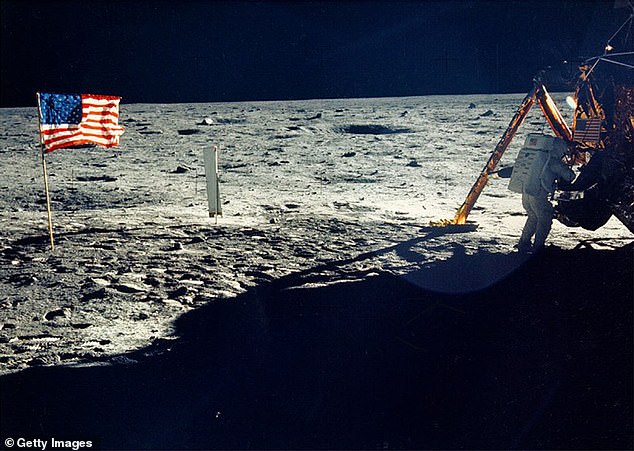 There was too much work going on for any major celebration in the tracking stations when man first walked on the moon. Neil Armstrong is pictured working on the Eagle lunar module

David Cooke, a receiver engineer among the staff at Parkes that day, recently told the Herald Sun it was hard to explain what it felt like to play a role in the mission.

‘I saw the picture of Armstrong coming down the ladder and putting his feet on the moon on that little green TV screen,’ the 87-year-old said.

‘After it was all over I went outside and the Moon was still there above us, of course.

‘I was quite amazed to think, well, there were men up there and we had been a part of helping them get there.’

The Apollo 11 mission was just the latest in Australia’s involvement in United States space exploration.

The nation has played some part in every deep space mission NASA has undertaken.

The Parkes radio telescope continues to contribute to space exploration and remains one of the best facilities of its kind in the world.

Honeysuckle Creek closed in 1981 and its original antenna was relocated to the Canberra Deep Space Communication Complex at Tidbinbilla. 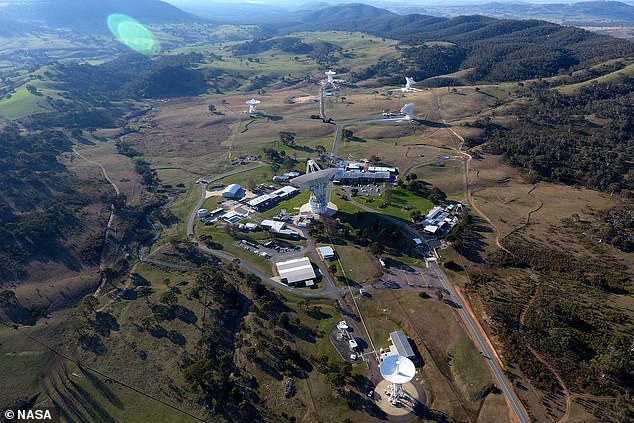 CSIRO manages and operates Tidbinbilla (pictured), which is one of three tracking stations that make up NASA’s Deep Space Network. The other two are in California and near Madrid

There are now five working antennas at the Canberra station: one 70-metre and four 34-metre radio dishes that communicate with craft in deep space.

CSIRO manages and operates Tidbinbilla, which is one of three tracking stations that make up NASA’s Deep Space Network.

Tidbinbilla’s sister stations are the facility at Goldstone and another near Madrid in Spain.

Those three stations provide permanent contact with more than 30 spacecraft, including missions to study Mars, Venus, Jupiter, Pluto, the moon and the sun.

Tidbinbilla has been involved in hundreds of missions apart from the Apollo flights, including the Skylab space station, and early flights of the space shuttle.

It is currently supporting Mars missions, including the Opportunity and Curiosity rovers, the Messenger spacecraft orbiting Mercury and the New Horizons spacecraft travelling to Pluto and beyond.

A rare copy of restored footage of the Apollo 11 landing, previously given by NASA to the CSIRO, was recently handed to the National Film and Sound Archive.

The donated footage is one of just three copies in the world and the only one held outside the US. 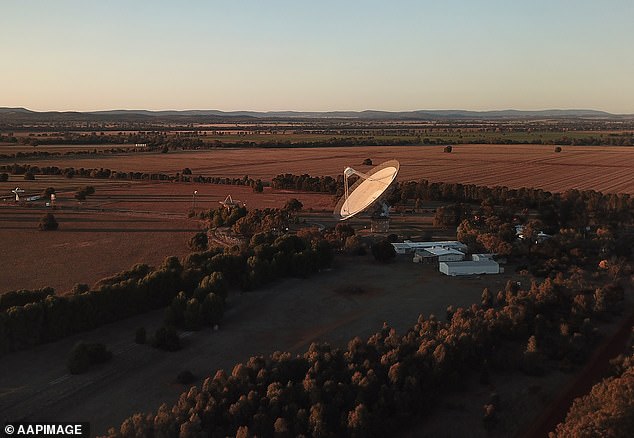 Australia has played some part in every deep space mission NASA has undertaken since 1957. The Parkes radio telescope (pictured) remains one of the best facilities of its kind in the world