How beeping your horn in Australia could cost you $2,669

How drivers can be fined up to $2,669 or JAILED just for beeping their horn – as the bizarre road rules Australian motorists really need to know about are revealed

Australian motorists could be slapped with a hefty fine for a simple, friendly beep of the horn.

Drivers across the country who use their horn for any purpose other than to warn others could be fined between $50 to $2,669 – including a hello or a farewell toot.

Victoria Police asked drivers about the correct use of the horn in a Facebook poll on Friday.

The crime-fighting agency posed the question: ‘Can you beep your horn to call out someone outside your vehicle?’

Using a car horn for any purpose other than to warn others is against the law (pictured, STOCK image of woman pressing the horn)

The answer? ‘No. A driver must only use their horns to warn others.

‘If you use your horn, or any other warning device, for any other purpose you could receive a $161 fine.’

Legally, a vehicle’s horn can only be used to warn other drivers of your position, warn animals to get off the road or used as part of an anti-theft or alcohol interlock device.

Facebook users argued that the horn can be used for warning pedestrians particularly when reversing out of a driveway or alley.

Other users joked that beeping the horn had a range of meanings from ‘get off the road and use the footpath,’ to ‘get off your phone and go’ and even ‘I’m about to emerge across your footpath’.

Another user joked: ‘[use the horn] all the way down the street, but only at 3am and only to say goodbye to your friends you just spent 30 minutes saying goodbye to,’ another user wrote.

A third said: ‘The beeping horn might mean ‘I’m WARNING you if you’re not out here in 10 seconds I’m leaving’. That’s a warning isn’t it?’

State laws forbid using a car’s horn outside of warning motorists of impending dangers on the road.

In NSW using a horn or warning device ‘unnecessarily’ carries a $344 fine. In Queensland the penalty starts at $66 but carries a maximum of 20 penalty units, which means drivers could be charged a maximum of $2,669. 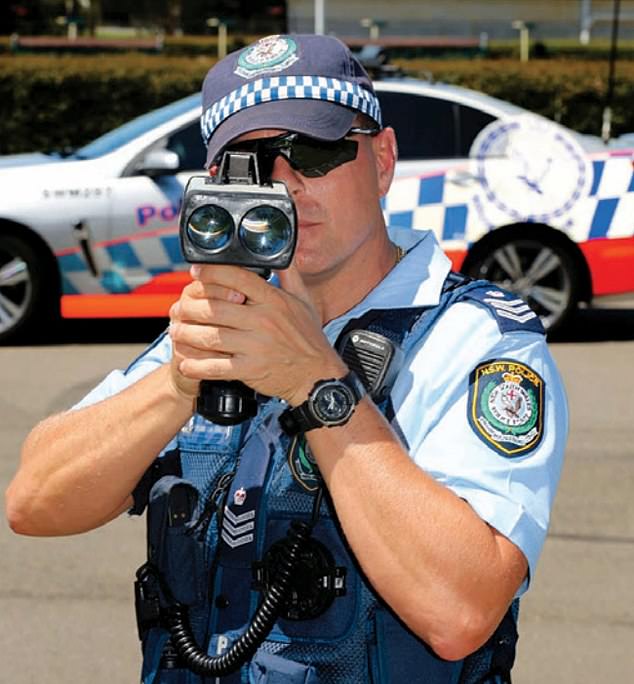 Drivers across the country using their horn for any purpose other than to warn others could be fined between $50 to $2,669 (pictured, Police officer with radar gun)

Drivers in South Australia and the Australian Capital Territory could be fined $193 for the offence.

In Western Australia, motorists receive a ‘modified penalty’ of 1 penalty unit which is currently $50 while ‘the use or allowing use of a horn unnecessarily’ will cost Tasmanian drivers $126.

Motorists in the Northern Territory could face imprisonment as ‘general penalties’ under the Traffic Regulations 2007 carry a maximum of six months in prison and or fines of up to $2,600.

It comes after a give-way quiz shared by the Royal Automobile Club of Queensland left Facebook users scratching their heads. 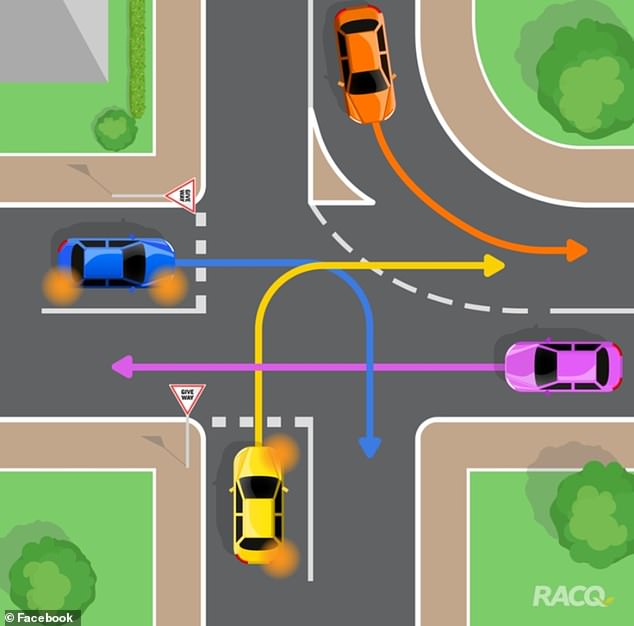 The picture showed the four-way intersection at Park Road and Rose Street in Kalinga, Brisbane, with different coloured cars and directional arrows and asked: ‘In what order do the vehicles proceed through the intersection?’

Most users agreed that the cars without a give way instruction would drive through the intersection first.

However, users seemed confused as to when the blue and yellow cars would proceed.

‘Orange and pink can move at the same time, after that my brain just hurts from looking at the mix of all the coloured lines,’ one user commented.

The correct answer is that the blue car proceeds through the intersection last.

Penalties for using the horn incorrectly

The ‘use of a horn or warning device unnecessarily’ carries a $344 fine.

The fine for the ‘illegal use of a warning device’ starts at $66.

Motorists receive a ‘modified penalty’ of 1 penalty unit which equals a $50 fine.

The ‘use or allowing use of a horn unnecessarily’ will cost a driver $126.