How being ‘angry and insane’ kept Jack Savoretti going

‘There are moments in your life when the strangest things happen and you don’t quite believe it,’ Jack Savoretti tells me, taking a rapid swig of coffee. He is explaining how he turned lyrics sent to him by Bob Dylan, his all-time hero, into a song on his latest album, Singing To Strangers. ‘I’d like to say we met under a Joshua tree or something deeply symbolic, but it was all done over email. I was sent two pieces of writing that read a bit like poetry, signed off simply with “Bob”. It’s weird because you are looking at these words, thinking this is sheer gold dust from your hero. And then you freeze because they become your responsibility. It’s up to you what you do with them, but the question is, are you up to it?

Jack Savoretti was only 18 when he was first signed, and 23 when he recorded his first album

‘My wife [actress and artist Jemma Powell] kept saying, “Are you sure you should do this? This is Bob Dylan. You absolutely can’t blow this.” And then one of the verses was impossible for me to make anything of, and so I decided just to take the idea of it and only use certain words.’ That song became Touchy Situation, and it is one of the 15 on the album that has completely changed his life. It is Savoretti’s sixth album, but his first to reach No 1. Thank you, Bob.

It marks a huge turnaround in fortunes for the 36-year-old half-Italian singer, who spent years struggling to establish himself as an artist and has played some of the world’s most desolate venues. ‘One low point was a pub in Wolverhampton with just four skinheads in the audience. One of them kept going to the toilet and you could hear it from the stage.’

Savoretti was only 18 when he was first signed, and 23 when he recorded his first album. Three years later he recorded a follow-up and his label flew him to America to meet record company executives, who told him he was ‘going to be huge’.

It was there that the problems began. ‘I was in a meeting and one of the executives told me he was going to have to change my surname. I stood up and said “An Italian surname wasn’t a problem for Frank Sinatra” and walked out. I then walked away from every contract I had. I’d just got married, my wife had found out she was pregnant, my second album was stalled and I got sued by my record company.

‘The day Jemma gave birth to Connie [now seven], I walked out of the hospital to a cashpoint and checked my balance. I had £525. I had no album, I still had legal issues flying all over the place. I had no plan. I rang up a couple of mates, asking for a job, and both said, “But you only know how to sing.” So my plan was to keep on singing, get in a van, tour, keep on writing, keep on touring.

‘It was a bleak time. I was angry. I felt I’d failed my wife. I was drinking and I felt like the biggest a***hole in the world. When I think about playing gigs then, like a festival in Sheffield where it was raining non-stop. Nine people stood in front of us, including a toothless woman shouting, “Sing us a song, Jesus.” I actually can’t believe I kept on with it. If I hadn’t been so angry and insane, I might have stopped, but I just kept going.’

Life on the road means you will always know what it’s like to sing by the toilets..

Since his fourth and fifth albums, Written In Scars and Sleep No More, reached the Top Ten, Savoretti has been on an upward trajectory. The family moved to Oxfordshire (they also have a four-year-old son, Winter) and life was going well. Nevertheless, when it came to this release Savoretti made a decision that could have killed his career for good. He says: ‘I told my record company I wanted to make an old-style Italian album. A lot of people told me I was completely crazy and that I was on a roll and not to take a mad risk like that, but I just followed my instincts. What I’ve learnt from this business is, don’t be afraid to make mistakes because you are going to learn so much from them.’ 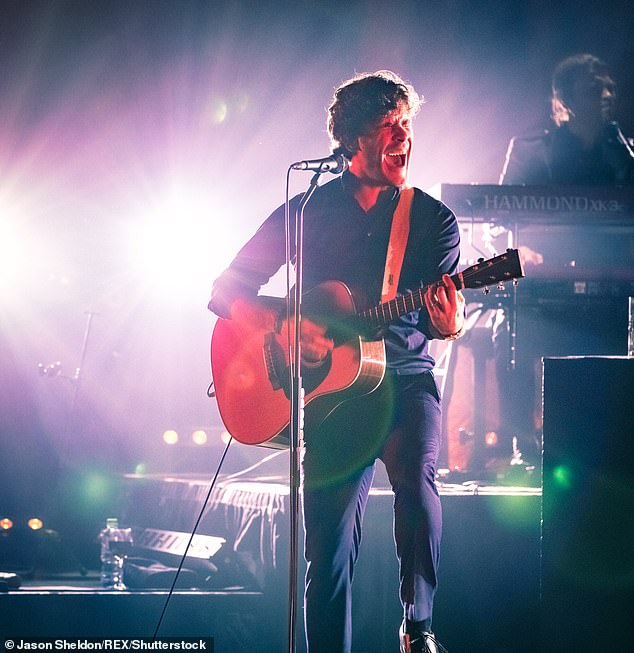 Since his fourth and fifth albums, Written In Scars and Sleep No More, reached the Top Ten, Savoretti has been on an upward trajectory

Right now he’s in the middle of a sell-out UK tour, though he no longer travels by van. ‘You don’t ever forget what that was like, though,’ he says. ‘Even now I’ll take a bottle of wine from the dressing room with that feeling of “I’ve got a free bottle of wine!” If you really do live a life on the road it completely changes you as a musician. It’s never about fancy hotels and turning up at award ceremonies. You’re always going to be the guy who knows what it’s like to sing by the toilets.’

The Special Edition of ‘Singing To Strangers’ is out on Friday