Revenge is a dish best served cold and today Boris Johnson watched as Michael Gove was handed something truly sub-zero.

The former foreign secretary made it into the final two in the race to be the next prime minister and watched as his rival fell agonisingly short.

It will have been a sweet moment for Mr Johnson who saw his ambitions to be PM torpedoed by Mr Gove in 2016.

Conservative Party members will now be asked to choose between Mr Johnson and Jeremy Hunt after Mr Gove finished the final ballot of Tory MPs in third place, just two votes behind the current Foreign Secretary.

The result, which came amid claims Mr Johnson’s supporters may have lent their support to Mr Hunt to get him over the line and into the final two, will have prompted a collective exhale of breath in Tory Party HQ.

They were afraid a battle between the pair would tear the Conservatives apart and reignite the poisonous rivalry between the Tory big beasts which exploded into life after the 2016 EU referendum.

Mr Johnson’s supporters wanted to face Mr Hunt in the final two so that the contest is focused on their respective visions for Brexit and the UK, rather than the ‘Tory psychodrama’ of the so-called ‘frenemies’.

The seeds of the rivalry between Mr Johnson and Mr Gove were planted when the pair attended Oxford University together.

But it was the Brexit referendum which caused their relationship to break down.

During the 2016 EU referendum campaign Mr Gove and Mr Johnson were almost inseparable as they boarded the Vote Leave bus and travelled across the country to make the case for Brexit. They poured pints together during a campaign stop a few weeks before June 23. 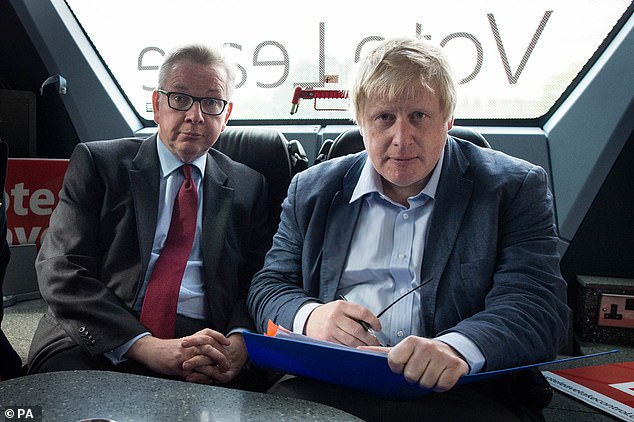 The Vote Leave bus, bright red and emblazoned with a promise to give the NHS an extra £350m a week, acted as their base of operations

In the run up to June 23 three years ago the pair were largely inseparable as they led the Vote Leave campaign to an unexpected victory.

They went on the campaign trail on the famous big red bus as they sought to make the case for leaving the EU all across the country.

They pulled pints together during campaign visits and shook hands with supporters as they appeared to be friendly and at ease in each other’s company.

But the vote to Leave the EU and the events it unleashed caused their relationship to fracture as professional ambition took hold.

David Cameron’s decision to quit in the immediate aftermath of the referendum result plunged the Conservative Party into a period of vicious political infighting not seen since the fall of Mrs Thatcher.

Mr Gove had promised to back Mr Johnson as part of a Tory ‘Dream Ticket’ in which he would be chancellor.

But he withdrew his support just hours before the latter was scheduled to launch his bid for Number 10.

He was immediately accused of ‘knifing’ the former mayor of London as furious Tory MPs suggested he had always been a ‘cuckoo in the nest’ and was guilty of ‘treachery’.

Mr Gove sensationally announced his own candidacy as he claimed that he had only recently decided that Mr Johnson lacked the qualities needed to lead Britain. 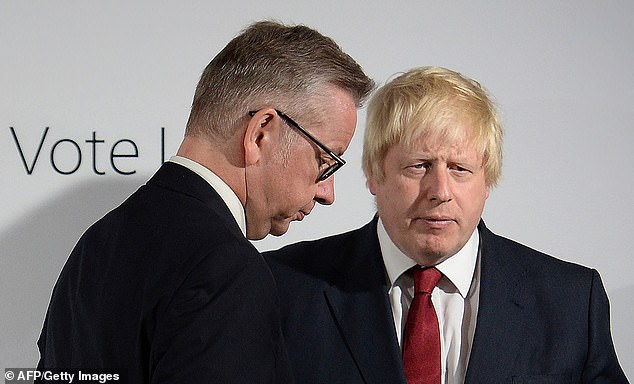 The 2016 Brexit vote unleashed political forces which would not only shake British politics but also cause the relationship between Mr Gove and Mr Johnson (pictured together the day after June 23) to fracture. 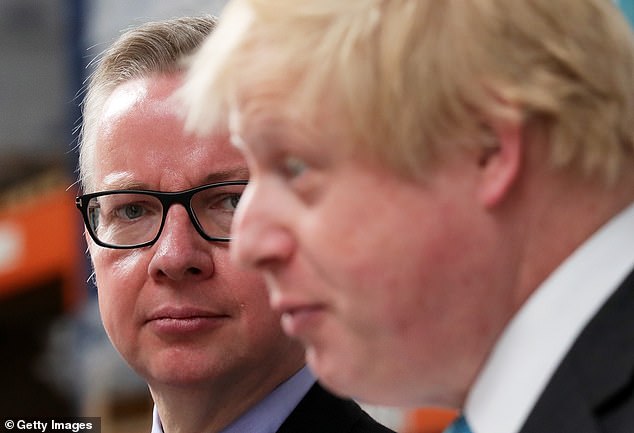 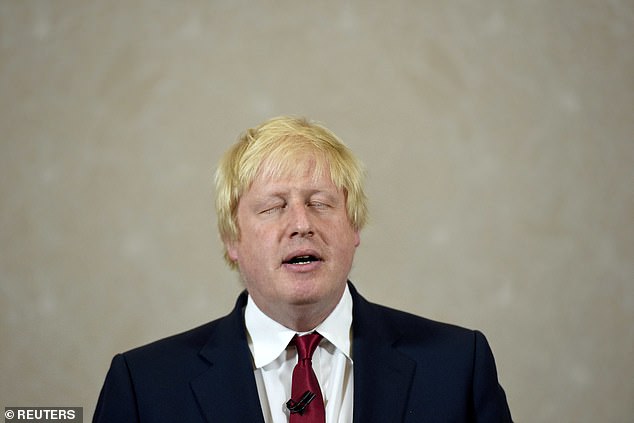 Mr Gove’s decision in 2016 to launch his own bid prompted Mr Johnson (pictured on June 30, 2016) to sensationally scrap his own attempt just hours later

Allies of Mr Gove claimed at the time that Mr Johnson was ‘chaotic’ and he had been ‘cavalier’ in his approach to putting together his top team.

But outriders for Mr Johnson claimed Mr Gove had been plotting all along to launch his own bid to be PM.

The fallout from Mr Gove’s decision immediately drew parallels with the dark days of 1990 when Mrs Thatcher was ousted from Number 10 by her own party.

Mr Gove was reportedly spotted with his arm around Mr Johnson at an event the night before the alleged betrayal when he was believed to have told people the latter was the person to take over from Mr Cameron.

But the next morning, just after 9am, he announced his own candidacy – apparently without telling Mr Johnson what he was doing.

That prompted some Johnson-backers to abandon him and jump ship to Mr Gove as the Conservative Party began to rip itself apart.

Just before noon Mr Johnson quit the race, stunning his supporters with the revelation as it came at what was supposed to be his launch event.

Mr Gove even suggested in the maelstrom that followed that Mr Johnson did not believe ‘heart and soul’ in Brexit.

The then Justice Secretary had repeatedly said he did not want to be PM and his apparent change of heart provoked widespread fury. 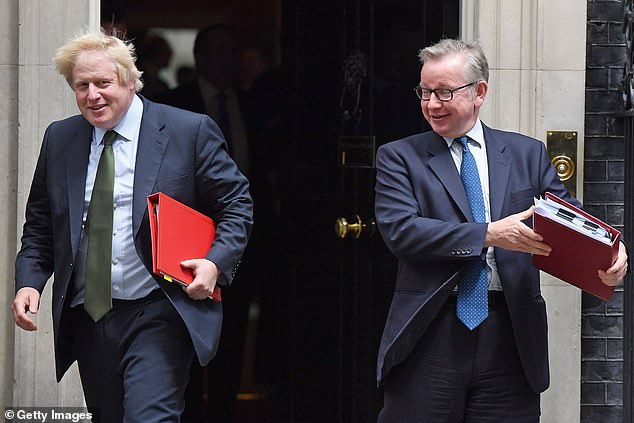 One Tory MP said of Mr Gove that there was a ‘very deep pit reserved in Hell for such as he’.

But Mr Gove rejected accusations of treachery and insisted his decision to stand had been driven by ‘conviction, not ambition’.

‘I did almost everything I could not to be a candidate for the leadership of this party,’ he said.

However, within a week his 2016 campaign was dead.

He was booted out of the contest in the second round of voting as he secured the support of just 46 MPs which was fewer than he got in the first round amid growing concern about the way he had declared his candidacy.

One backer of the former mayor of London said: ‘Gove offered the party and the country vaulting ambition, craven disloyalty and treachery. Today his arrogance was repaid in full – with failure and total humiliation.’

A new biography of Mr Gove by Owen Bennett, serialised in the Mail earlier this month, suggested the seeds of the rivalry had been planted when they were students together at Oxford.

In his first year at the university, Mr Gove apparently became a ‘stooge’ of Mr Johnson’s as the latter fought to become president of the Oxford Union.

Mr Gove was apparently a willing member of the ‘Boris cult’ as the larger-than-life, as he later described his first encounter with him: ‘It was in the Union bar. He was a striking figure with sheepdog hair and penny loafers, standing in a distinctive pose with his hands in his trouser pockets and his head bent forward.’

While Mr Johnson had the seniority at university the pair climbed to relative political parity in recent years as both took on high profile jobs. 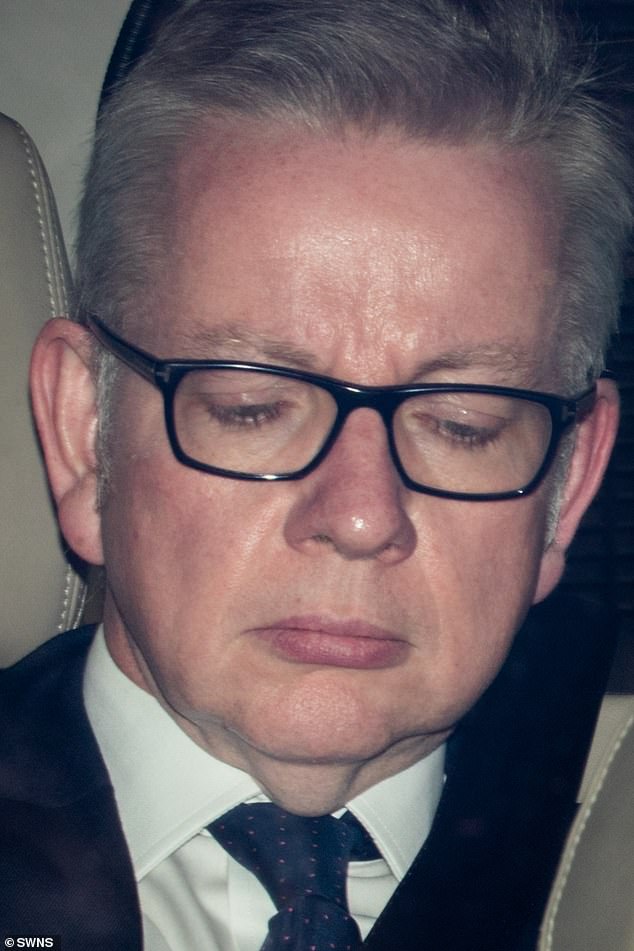 For Mr Johnson that was as mayor of London and foreign secretary, and for Mr Gove it was as education secretary, justice secretary and now Environment Secretary.

But it is Mr Johnson who is now poised to out do his rival and secure the biggest prize in British politics: The keys to 10 Downing Street.

Mr Gove had mocked Mr Johnson during the 2019 Tory leadership campaign as he told him: ‘Whatever you do, don’t pull out.’

Today’s result, and his popularity with the Tory grassroots, mean it is Mr Johnson who is set to have the last laugh.