Boris Johnson channeled  the New Deal of US president Franklin Roosevelt today as he laid out his vision for Britain’s post-coronavirus recovery.

But the scale of what was unveiled by the Prime Minister at a college in Dudley this morning appears to be on a far lower order of magnitude to that put in place by the Democrat in the early 1930s to combat the horrors of the Great Depression.

Some 12million Americans were thrown out of work in the years following the Wall Street Crash of 1929.

The newly-elected Democratic president embarked on his ground-breaking plans in 1933, including reform of banks, support for the elderly and the jobless, and the repeal of Prohibition.

Franklin, known as FDR, is estimated to have pumped more than $40billion at the time into a scheme of works and other fiscal stimulus designed to build and spend the US out of mass unemployment.

In today’s money that equates to $800billion, or around £650billion. The scheme unveiled by Mr Johnson today promises around £5billion in new money – albeit for country smaller in geographic size and population.

Another way of measuring the scale is that £5billion is around 0.25 per cent of UK GDP, whereas the New Deal was equivalent to 5-7 per cent of US GDP per year at the time – some 40 per cent in total. 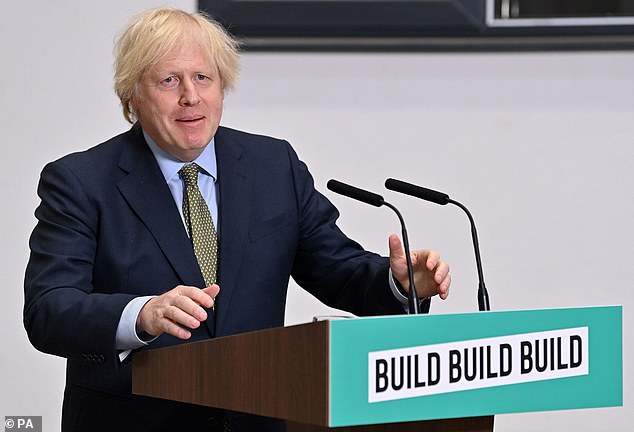 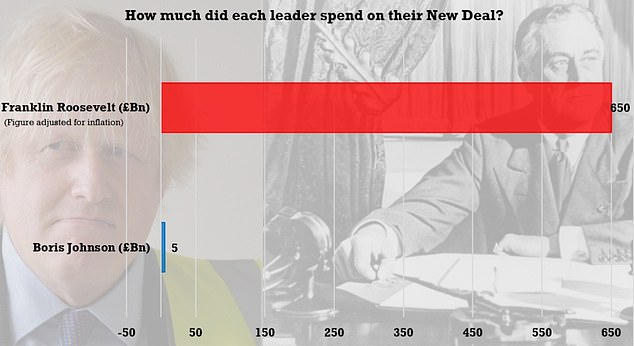 FDR’s New Deal was controversial at the time – and was bitterly opposed by some politicians – and their remains argument over how effective it was.

Some historians have suggested it was the massive military spending of the Second World War, after the US belatedly entered in 1941, that finally put the Great Depression to bed and laid the foundations for the late 20th Century superpower.

To facilitate a construction drive the planning system is set for the biggest overhaul ‘since the Second World War’, including making it easier to turn newly-vacant shops into homes.

But the size of the £5billion upgrades for the coming year is dwarfed by the estimated £100billion costs of bailouts for furloughed workers and the self-employed. It is made up of previously-announced money being spent faster, and the respected IFS think-tank also pointed out that it is smaller than the capital spending pushed through by the Labour government after the credit crunch.

Even senior government officials seemed embarrassed about the reference to FDR, with one admitting it was ‘really quite silly’. ‘We’re not talking 40 per cent of GDP levels,’ they said.

Here are how the two New Deals compare in some areas: 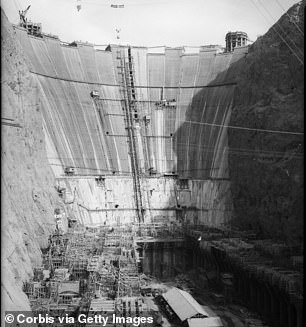 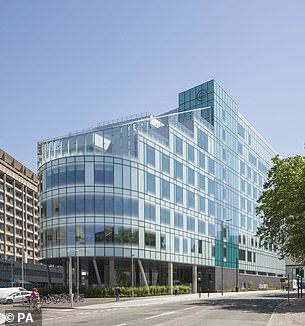 The Hoover Dam in Nevada (left, in 1934) was one of the flagship projects in Franklin Roosevelt’s New Deal. £1.5billion will be allocated this year for hospital maintenance to improve A&E capacity and enable hospital building in the UK (the new Clatterbridge Cancer Centre, right)

Roosevelt: FDR set up the Public Works Administration which provided funding to build things like hospitals and schools as well as dams and airports. It spent an estimated $7billion over the course of its existence – roughly $138billion or £112billion in today’s money. The PWA is perhaps most famous for its spending on the Hoover Dam. 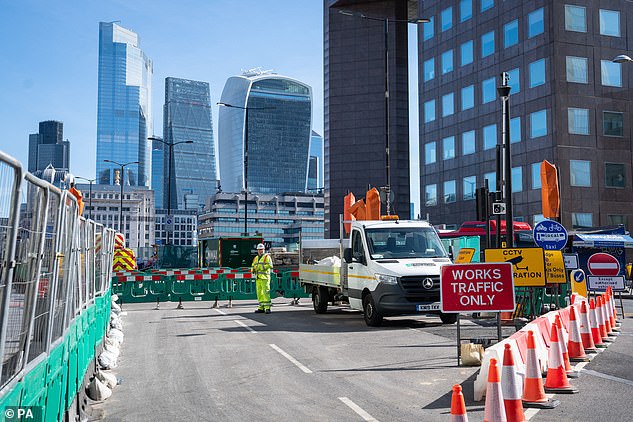 £100million will be spent this year on 29 projects in the UK’s road network. That will range from bridge repairs in Sandwell to improving the A15 in the Humber region 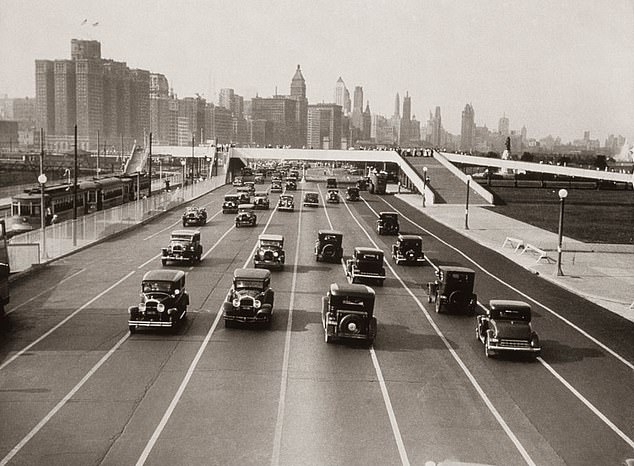 FDR set up the Works Progress Administration to put the unemployed back to work. Some 650,000 miles of new roads were built under the initiative and the WPA spent an estimated $11billion, which represents around $215billion or £175billion in modern terms

Johnson: £100million will be spent this year on 29 projects in the UK’s road network. That will range from bridge repairs in Sandwell to improving the A15 in the Humber region.

Roosevelt: FDR set up the Works Progress Administration to put the unemployed back to work. Building new roads was one of the WPA’s main outlets, along with constructing public buildings, airports and parks. Some 650,000 miles of new roads were built under the initiative. The WPA spent an estimated $11billion, which represents around $215billion or £175billion in modern terms.

Roosevelt: Farmers were paid to leave fields fallow to prevent surpluses and protect prices. New laws were passed to pave the way for hydroelectric dams to be built along the huge Tennessee River.

Johnson: The Prime Minister today outlined plans to spend the UK out of the coronavirus slump. Rather bizarrely for a Tory PM he at one point pointed out he was not a ‘communist’, adding: ‘I believe it is also the job of government to create the conditions for free market enterprise.’

‘We can do all this now partly because of the prudent management of the economy in the last 10 years,’ he said as he addressed the audience in Dudley.

‘But also because we are planning to invest now, when the cost of borrowing allows it and when the returns are greatest. Because that is the way both now and in the medium term to drive the growth, to fuel the animal spirits and the long-term business investment on which our future prosperity depends.’

There was a conscious nod to the originator of the New deal as he added: ‘I am conscious as I say all this that it sounds like a prodigious amount of government intervention. It sounds like a New Deal.

‘And all I can say is that if so, then that is how it is meant to sound and to be because that is what the times demand.’

Roosevelt: He spoke of the need for the state to help the ‘forgotten man’ at the bottom of the economic pyramid.

In Mark Twain’s 1889 novel A Connecticut Yankee in King Arthur’s Court, the author called for a ‘new deal’ for exploited workers.

Roosevelt had read the book and on accepting the Democratic presidential nomination in 1932, he said: ‘I pledge myself to a new deal for the American people. This is more than a political campaign. It is a call to arms.’