How Brisbane man Josh Mangleson, 25, saved for a house deposit by selling his Lego

‘I put a deposit on our home with Lego’: How a savvy property owner, 25, cracked into the market with his childhood toys – and NO help from his parents

The property market is a daunting prospect for most millennials but one savvy investor has turned his love of Lego into a different pile of bricks.

Josh Mangleson, 25, from Brisbane began collecting Lego as a child but it wasn’t until he began looking for new sets to buy online that he realised his old childhood toys might be worth some money.

Josh then began investing in more Lego sets and selling them online for a profit – eventually managing to scrounge up $20,000 from the tiny blocks alone.

‘Most people still don’t believe it when I tell them I put a deposit on our home with Lego,’ he told news.com.au.

Josh Mangleson, 25, from Brisbane began collecting Lego as a child and realised his old childhood toys might be worth some money. He went on to make $20,000 just by selling them off

‘In high school before I had my first job I’d try and find ways of making money to buy new Lego sets. I’d look at buying them online, and I started to see the values on some of my older sets and could hardly believe my eyes. So I started to see my own Lego collection as a bit of an investment.’

In min-2016 during his first year of a Property Economics degree at university, Josh was learning about different types of investing and decided to go all-in on his Lego hobby.

He said he went on a buying spree over about 12 months, putting his entire savings into Lego sets.

‘I think my parents thought I was crazy when I started spending thousands of dollars at a time on Lego and came home with car boots full of sets. But when I started showing them I was turning a profit they soon became supportive of it.’

He said he would focus on sets that he knew would have a high demand from collectors and that were nearing the end of their shelf life so would become rarer in stores.

He also tried to buy sets when he could find them for discounted prices.

After holding on to the sets for an average of 18 months he would then sell them on sites such as eBay and Gumtree making use of free or cheap listing offers.

Mr Mangleson said he would see an average return of more than 40 per cent, and claims he’s sold single minifigures for as much as $500. 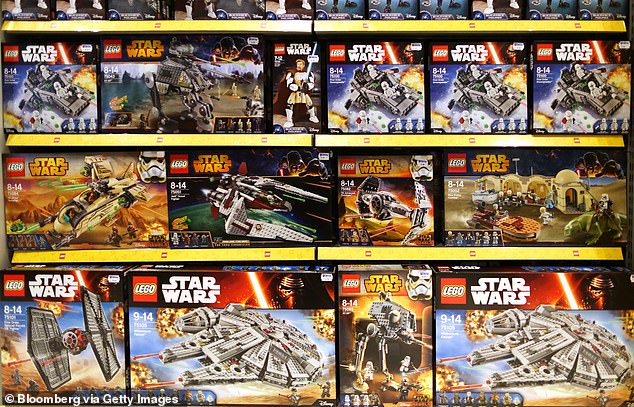 He said he went on a buying spree over about 12 months, putting his entire savings into Lego sets (stock image)

He said he sold about 75 per cent of the sets he had collected in 2018 for an average profit of about 40 per cent.

The savvy entrepreneur sold about 250 sets in total, about half from his childhood collection and half newer sets he bought.

In total he made about $20,000 from his Lego venture which, along with the $15,000 first homebuyers grant, allowed him and new wife Jess to put a deposit on a house.