How do you deal with Britain’s biggest divas? Be a diva yourself, say the cast of Ten Percent

Helena Bonham Carter, Phoebe Dynevor, Dominic West, The Crown’s Emma Corrin… rarely has a show boasted such a stellar line-up of guest stars, and the most delicious thing about Amazon Prime’s new comedy Ten Percent is that they’re all royally sending themselves up.

Based on the hit French series Call My Agent! about a chaotic talent agency (which was called Dix Pour Cent in its original language, the cut the agency traditionally takes from its stars’ fees), this British remake had skyhigh Parisian heels to fill – and the good news is it does it with panache.

Like the original series it centres on a group of backstabbing agents trying to deal with their diva-like celebrity clients, and it’s seeing these real-life stars playing their abominable alter egos that really gives the show its warmth and wicked humour.

L-R: Stella, Zoe, Ollie, Jonathan, Misha, Rebecca, Julia and Dan, with Mathias the dog in front. Based on the hit French series, Call My Agent! is about a chaotic talent agency

Rather like Ricky Gervais’s Extras, in which A-listers such as Samuel L Jackson, Ben Stiller, Robert De Niro and Kate Winslet graciously sent themselves up as bullies or bores, seeing some of our best-loved actors playing monstrous parodies of themselves is not only hilarious, it’s also a clever plot device that allows the agents to scheme and lie as they desperately try to mollify their clients.

And while the key element of the French show has been retained, there have been subtle changes to reflect the reality of the British entertainment world. For example, while Call My Agent! has the agents screaming at each other at 90mph and waving their arms around in typically Gallic fashion, in Ten Percent you’re more likely to see a passive-aggressive nod and a raised eyebrow.

It all centres on entertainment agency Nightingale Hart, founded by uber-agents Richard Nightingale and Stella Hart (Jim Broadbent and Maggie Steed), which has some of the biggest actors in the country on its books.

‘Over the years they’ve become a very, very successful agency,’ says Maggie. ‘Absolutely committed to their clients, and very principled.’

But the fly in the ointment is Richard’s son Jonathan (Jack Davenport), who sees himself as the heir apparent. ‘In his head he’s second in command,’ says Jack.

‘He’s very much the Prince Charles of the piece, waiting for his life to begin even as he approaches middle-age. He was a somewhat privileged, upper-middle-class kid who drifted about after an expensive education.

‘Then he went to work for his dad, and the undercurrent with Jonathan the whole time is, “Do I deserve to be here?” That insecurity is fun to play because insecure people spend a lot of time trying to hide their insecurities.’

His rival is ruthless agent Rebecca (Lydia Leonard). She’s tough, gay and passionate about her job, but appears to have a heart of stone. 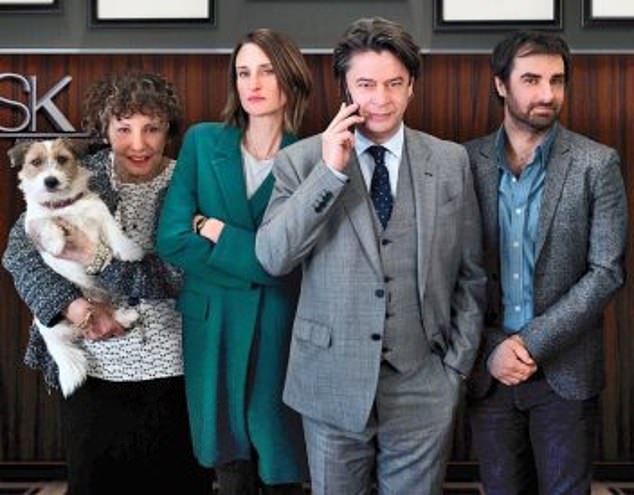 And then there’s the much more louche Dan (Prasanna Puwanarajah), an actor-turned-agent who will always go into bat for his stars but doesn’t know how to give them bad news. Making up the core staff are Jonathan’s PA Julia (Rebecca Humphries), who’s pining for her boss, Dan’s PA Ollie (Harry Trevaldwyn) and ambitious receptionist Zoe (Fola Evans-Akingbola).

As the show begins, two key events are about to have a big impact on the office. The first is that a young woman called Misha (Hiftu Quasem) walks into Nightingale Hart looking for Jonathan, and ends up getting a job as Rebecca’s assistant – much to Jonathan’s distress as she harbours a secret about him.

And then Richard dies, leaving the company struggling financially and ripe for a takeover from a big American firm. Meanwhile, Dan’s client Kelly Macdonald has just been passed over for a role in a Hollywood blockbuster because she looks too old – and he doesn’t know how to tell her.

To research their roles, the cast spoke to their own agents for inspiration. ‘I’ve got to admit that I’ve got a slightly sketchy relationship with research in general, but I phoned my agent and asked, “Can I take you out for lunch and ask you a few questions?”’ says Jack.

‘He told me that one of the hardest things about his job is that all day you’re either Father Christmas or the Grim Reaper, you pinball between the two and that’s very emotionally taxing.’ Jack knew many of the guest actors and says that initially it was confusing working opposite them when they were playing ghastly versions of themselves.

‘Because I’ve been around for far too long, I knew 80 per cent of the guests and they’re either friends of mine, people I’ve worked with, or both,’ he says. ‘My first scene was with Olivia Williams, who I’ve known since 1995.

‘Initially it was like having vertigo; I was doing this scene thinking, “Hang on, you’re you, kind of, while I’m not me and we’re both still acting.” It took me a minute to get my sea legs.

What was nice about playing myself is that I got to wear my own clothes. I knew I was going to be comfy! – Helena Bonham Carter

‘It was just as confusing with David Oyelowo and his wife Jessica, because I’ve worked with them both in the same film, Jessica played my wife. It felt like a hall of mirrors.’

The Olivia Williams episode also stars Helena Bonham Carter as her great old schoolfriend, with the pair both up for the same role. ‘Olivia’s actually a genuinely great friend in real life – we really did go to school together – and in the show we’re both offered the same part,’ says Helena.

‘But instead of just being straight with us they try to manipulate the whole situation. Jonathan basically risks losing us as clients.

‘What was nice about playing myself though is that I got to wear my own clothes, I knew I was going to be comfy. My last job was playing Princess Margaret, which was incredibly uncomfortable!’

And Helena wasn’t the only one who relished playing herself. ‘It’s easier because you don’t have to do an accent,’ laughs Dominic West, who gets paralysing stage fright before appearing in a play in the show.

‘And it’s not really me. The great thing is you get to be a sort of parody of yourself. I loved that the agents in the series seem to run the world and solve all your problems. I’m very fond of my agent so in a way it was similar.’

Bridgerton star Phoebe Dynevor also plays herself, as the agency tries to sign her up. ‘There was no preparation involved, which was great,’ she jokes.

‘I know my backstory of course, so I didn’t need to figure that out. But it was funny establishing what sort of heightened version of myself I was going to play because it couldn’t just be me. You want to be honest to your true character but give the audience something extra.’

Of course television history is littered with terrible remakes of muchloved foreign series, but that doesn’t mean they can’t be done well – think the American version of The Office. The man tasked with making Ten Percent work was writer and director John Morton, who gave us award winning Olympics comedy Twenty Twelve and the hilarious BBC satire W1A.

He was a fan of Call My Agent! before he took on the job, and knew just how important it was to get the remake right.

‘It started with a call from, ironically, my agent,’ he laughs of the initial discussions three years ago. ‘I was an early fan of the show before it became a massive hit. 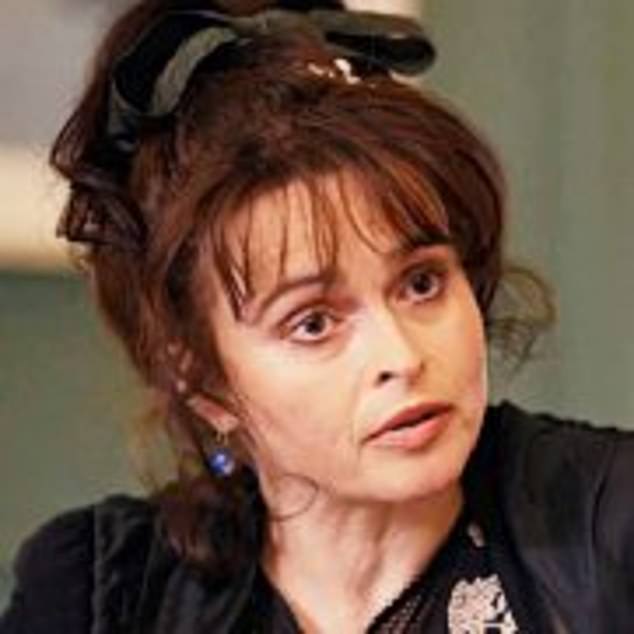 ‘It was daunting though because my first thought was, “How do I not mess this up?” I had a huge sense of responsibility to the original show because people loved it, but I knew it had to be different too.’

He started by carefully rewatching the original… and then trying to forget it. ‘There was no point in thinking, “Oh my God, how am I going to make anything as good as that?”’ he says.

‘I realised I had to get past it, and to do that I had to fall in love with a new version of the characters. But actually it surprised me how quickly that happened. It’s a bit like when you move house and you think you’re going to miss your old one but you don’t.’

The scripts were written with certain actors in mind, but had to be versatile enough that another celebrity could step in if the first choice was unavailable or unwilling to take part. Each guest star needed to be free for eight days of filming and David Harewood, who lives in America but was on a break seeing family in the UK, was offered the chance to be in the show as part of a story based around a James Bond film.

He’s asked to read for the part, but decides to give up acting and become a black cab driver. ‘I was planning on coming back and having a rest when my agent said, “You’ve got to do this!”

‘When they mentioned Bond I thought, “That’s great, probably the closest I’m ever going to get to the character.” I liked the fact there was some emotional stuff and also some comedy.’

Perhaps Ten Percent’s most unlikely star is Stella Hart’s dog Mathias, a nod to matriarch Arlette’s Jack Russell terrier Jean Gabin in the French show, who gets under everyone’s feet.

‘He was the diva of the show,’ says Maggie Steed. ‘He wasn’t a team player in any way. He was surprisingly good and enthusiastic – quite early on he wanted to do his best and ran straight into a glass door.

‘I could always get him to do more off-camera than on it, which was frustrating. For one scene I had to spend quite a lot of the day covered in pâté because he was supposed to be nosing around my chest but, of course, he wouldn’t play ball.’

Barking mad it may be, but don’t bet against Ten Percent eclipsing the success of the original.