The Prime Minister raised a chubby paw aloft like an overzealous lollipop lady and announced in that peculiarly elastic voice he was calling things to a halt.

His easing of lockdown, which he’d moved along at a lickety-split pace these past few weeks, was being stopped dead in its tracks.

‘We should squeeze that brake pedal,’ he announced.

His spoke in long, decompressed tones, the way a jockey might soothe a wayward horse or an adult try to get a giddy toddler to cool it.

So, back we were again in the Downing Street briefing room, that dreary oak-panelled space which for some reason always reminds me of the boring cocktail parties I used to cover as a young reporter.

I’d rather hoped we were done with these coronavirus briefings. But with infections spiking back to over 4,000 a day it was time for another a Prime Ministerial pep talk. That dreaded ‘second wave’ we so feared is rapping its knuckles at the door.

Plans to open a final raft of businesses today are now postponed.

That means ice rinks, bowling alleys and casinos remain shut for another two weeks. No great dent in my own social life, I admit, but what a body blow for all those poor business owners.

Dreadful news too for those hoping to hold wedding parties. They remain on the black list. There will be no big Eid celebrations for Britain’s Muslims, either. 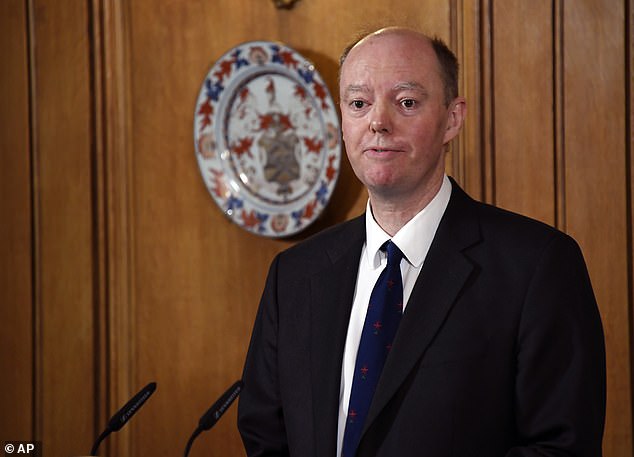 Accompanying Boris was Chris Whitty, England’s Chief Medical Officer, the one who looks like an even more gormless version of Chris Grayling

‘I’m really, really sorry about that,’ said Boris. ‘But we simply can’t take the risk.’

There was a bashfulness about him as he uttered these remarks, his eyes suddenly finding something interesting to stare at on the floor.

No PM likes to be a party pooper, least of all this one.

Sorrowful he might have been at times, but, goodness, how much better he looks, even from the last time he was here. Those brisk walks with Dilyn the dog appear to have done him a world of good.

No longer does his shirt collar appear to be asphyxiating him. His chalky face appears to have felt the sun’s rays.

Accompanying Boris was Chris Whitty, England’s Chief Medical Officer, the one who looks like an even more gormless version of Chris Grayling. We haven’t seen old Whitty for a while. Last time he looked fed up, desperate to return to his laboratory and twiddle with his microscopes. 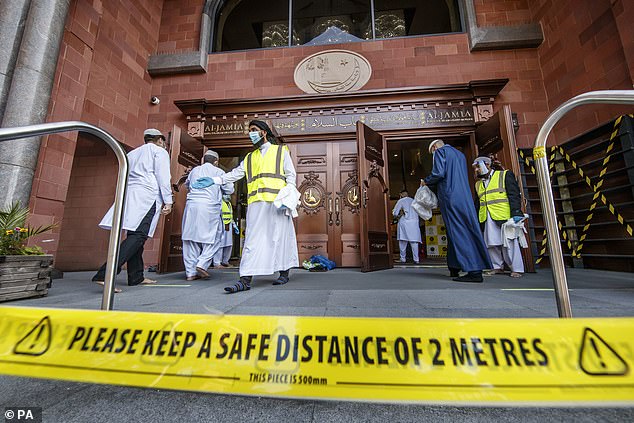 There will be no big Eid celebrations for Britain’s Muslims. Pictured: Worshippers observe social distancing as they arrive at the Bradford Grand Mosque in Bradford, West Yorkshire

Yesterday, though, there was rather strident air about him right from the get go as he came bounding in ahead of the PM. It was almost as if there was a faint touch of the ‘I told you sos’ about him. Whitty, in case you missed it, has been Captain Cautious about easing the lockdown.

I’m no body linguist, but there seemed a palpable froideur between the pair.

Boris certainly wouldn’t have been thrilled when Whitty told reporters we have ‘probably reached the limit of what we can do’ in terms of easing the lockdown. What this could mean for schools reopening after the summer, I dread to think.

Two other notable moments from the (mercifully) brief session.

Firstly, Boris has new catchphrase. ‘Hands, face, space,’ he kept repeating, a reference to people washing their hands, wearing a mask and keeping their social distance to stop the virus from spreading. 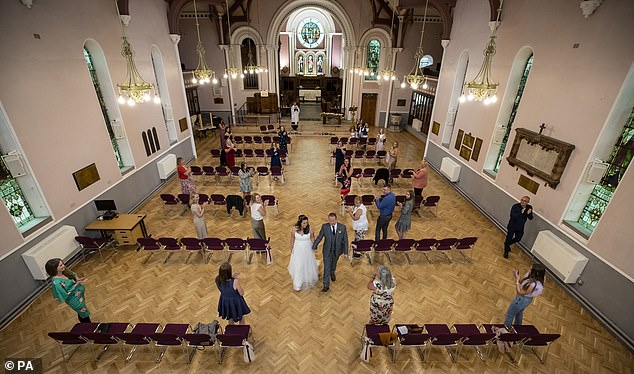 Dreadful news too for those hoping to hold wedding parties. They remain on the black list. Pictured: David D’Arcy and his wife Hayley Collins at their socially distanced wedding in July

‘Pretty punchy, I think,’ he said proudly. Secondly, we heard how he might have a ‘brief staycation’ somewhere if possible when not working ‘flat out’ to defeat the virus. Let’s hope he gets the chance.

With 1pm approaching, the PM was getting fidgety.

‘Hands, face, space. Get a test,’ he repeated one last time.

Possibly not realising the microphones were still on, he turned to Whitty and asked: ‘I think I repeated that often enough, didn’t I?’

Indeed he had – though how he must long for the day when he no longer has to.