How Germany has tested thousands of air passengers for coronavirus

While Britain continues to hold out against introducing coronavirus tests at airports, Germany has nearly doubled its testing rate to screen thousands of passengers returning from Covid-19 hotspots abroad.

Transport Secretary Grant Shapps insisted today that testing at airports was not a ‘silver bullet solution’ after the UK’s quarantine policy was thrown into confusion when Portugal was unexpectedly kept on the ‘travel corridor’ list.

But in Germany, which has won plaudits for its testing programme since the start of the pandemic, travellers from high-risk areas have been getting free, compulsory coronavirus tests since August 8.

Germany’s busiest airport in Frankfurt has carried out more than 120,000 tests – with passengers exempted from a 14-day quarantine if they test negative.

Results are generally delivered to passengers within three days, with some airports promising them within 24 hours or even on the same day.

Mandatory tests will be dropped as the summer ends, but the recent resurgence in cases is already showing signs of slowing in Germany, in contrast to Spain and France where they are continuing to mount.

Germany’s mandatory tests apply to travellers returning from a list of high-risk countries, which include all of Spain and parts of France including Paris.

Major airports including Frankfurt, Munich and Hamburg have two test centres each to screen arriving passengers.

After taking the test, passengers must go home and begin 14 days of isolation – but in most of Germany, the quarantine ends as soon as they receive a negative result.

People who test positive must finish their 14-day quarantine, while some states are requiring a second negative test within a few days of the first.

Alternatively, passengers can show a negative result from the previous 48 hours if it was carried out in an approved country, such as Britain.

Airports are also offering voluntary tests to people arriving from lower-risk countries, such as the Netherlands and some parts of Belgium.

According to radio network RND, Frankfurt Airport has already carried out more than 120,000 tests for the virus.

‘As many tests as possible are the best way to uncover chains of infection as soon as possible and prevent a second lockdown,’ said Peter Bauer of testing provider Centogene, which is carrying out screening in Frankfurt.

The German Red Cross also has a test centre in Frankfurt where results generally come back within 24 hours, sometimes even on the same day.

Munich Airport says tests carried out before 3pm will generally deliver results on the same day, except at weekends.

Germany’s testing capacity is now as high as 1.2million per week, the health ministry says – with less than half of it being used before the airport tests began.

However, the number of tests performed in Germany nearly doubled to 900,000 per week during the summer holiday period.

The health ministry in Berlin says local authorities are carrying out random checks to enforce the rules, with fines for people who refuse to be tested.

Positive test results are automatically reported to public health authorities and added to the figures collected by the Robert Koch diseases institute.

People arriving in Germany by road or rail may also be subjected to random checks at one of the country’s nine land borders.

Germany announced last week that the mandatory tests would come to an end as the summer holiday season draws to a close.

‘With the end of the vacation period… this risk is going down again,’ health minister Jens Spahn told reporters in Berlin.

‘We have to focus more on patients with symptoms and those who had contact with Covid patients.’ 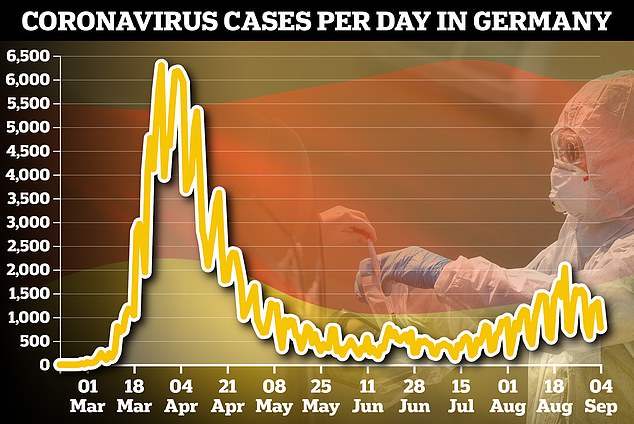 New infections have started to show signs of decline in Germany after several weeks of increase, in contrast to Spain and France where they are still rising 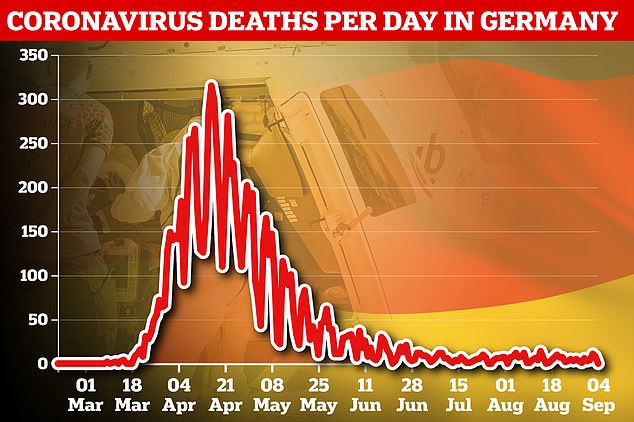 The announcement drew criticism from the operators of Frankfurt Airport, who said it would put further pressure on the airline and travel industries.

But travellers coming from high-risk areas will still be able to exempt themselves from a 14-day quarantine by taking a test and getting a negative result.

When the new rules will take effect is not yet clear, but Germany has already seen signs that the resurgence in virus cases may be slowing.

Germany saw 8,907 new cases last week, down from 9,411 the week before – the first week-on-week drop since early July.

The foreign ministry in Berlin says the rising numbers in previous weeks ‘often have to do with people returning from abroad and bringing the infection with them.’

In addition, recent virus patients have been younger than they were at the start of the pandemic, meaning they are less likely to become seriously ill or die.

The average age of people who tested positive in the week beginning on August 24 was only 33, compared to a peak of 52 in early April.

Britain has also seen an uptick in cases in recent weeks, but the UK government is still playing down the effectiveness of airport tests.

Mr Shapps told Sky News that a test on landing is ‘unlikely to find the vast majority of people who have travelled with coronavirus and are asymptomatic’. 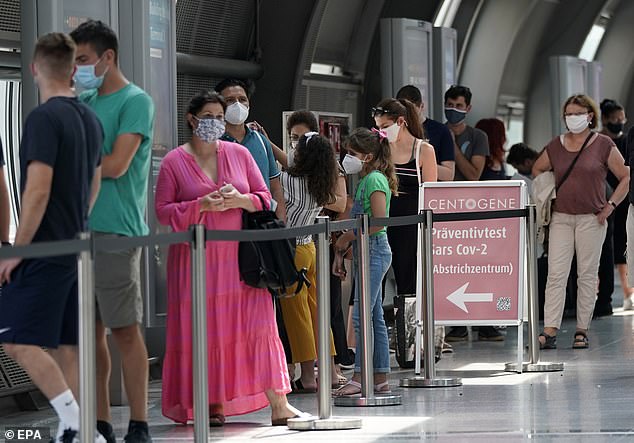 Passengers wearing masks queue at a coronavirus test centre for returning travellers at Frankfurt Airport, the busiest in Germany

Adding that airport tests were not a ‘silver bullet solution’, Mr Shapps acknowledged it ‘creates confusion’ for England, Wales and Scotland to have different rules.

‘I hear the calls from the airports and I spoke last night to John Holland-Kaye who’s the boss of Heathrow Airport and many others, it’s not that we’re ignoring the great work they’re doing on trialling tests,’ he said.

‘What you’ve got to be able to do is test further down the line with a period of quarantine as well.’

Discussing airport tests again later on Times Radio, Mr Shapps said he ‘would absolutely be doing it today’ if he believed it was effective.

‘The scientists are saying to us it will only pick up about seven per cent of day zero cases,’ Mr Shapps said.

‘It doesn’t mean it’s pointless to do – it’s a bit like you walk into a building sometimes now and they take your temperature – it’s not totally pointless but it doesn’t tell you what you need to know about it authoritatively as it suggests about whether you are carrying coronavirus.’

The UK’s quarantine policy is coming under pressure after some holidaymakers raced to come home from Portugal expecting it to be struck off England’s ‘travel corridor’ list, only for Mr Shapps to announce there were no changes.

Mr Shapps has identified a rate of 20 per 100,000 as the threshold at which the UK is likely to take action.

The Cabinet minister said the rate of test positivity in Portugal had come down, meaning no changes were made for England – but Wales has added Portugal to the quarantine list.

Welsh health minister Vaughan Gething said he was ‘very content this is the right thing to do’ after taking advice from the Joint Biosecurity Centre.