The independent fact checking body at the centre of an election row with the Tories is hurtling towards £1million-a-year in donations as Google and Facebook as well a number of billionaires throw cash at the charity.

Foundations set up by eBay creator Pierre Omidyar and left-wing investor George Soros have joined tech giants in giving six-figure sums to London-based Full Fact along with thousands of unnamed individual donors paying between £25 and £5,000 each.

Full Fact, which famously dismissed Vote Leave’s 2016 claim £350million a week goes to the EU and claims to ‘fight bad information’, has been forced to defend its own credibility after it stepped into a social media war after last night’s election debate.

Its co-founder and chief executive Will Moy, who was once a board member for anti-press body Hacked Off, claimed Twitter ‘could have acted sooner’ after the Conservative Party renamed their account FactCheckUK.

Senior Tory candidate Dominic Raab hit back today by saying: ‘Who said Final Fact is the final arbiter of what the public get to see as the truth? There’s no god-given right, set in law. It doesn’t sound to me like they like the competition’. 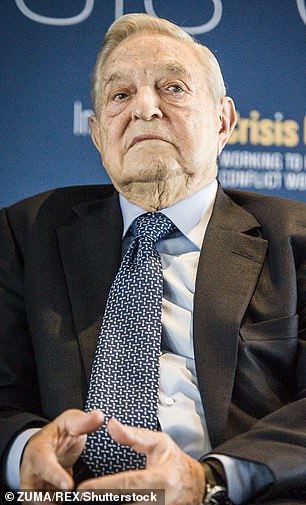 Foundations set up by eBay creator Pierre Omidyar (left) and left-wing billionaire investor George Soros are helping fund Full Fact, which is at the centre of a row with the Tories 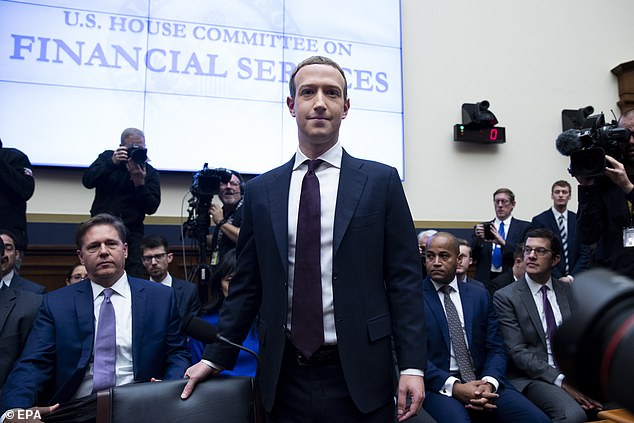 Mark Zuckerberg’s Facebook paid £132,000 in the first six months of 2019 after criticism about how the social network has handled the spread of misinformation on its platform 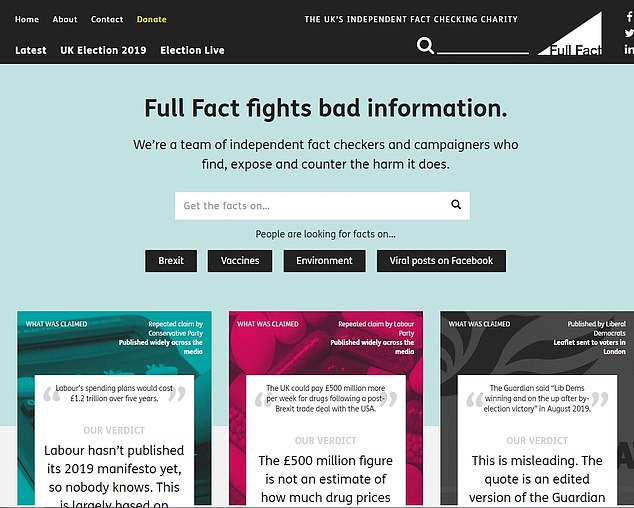 Full Fact was founded in 2010 by Mr Moy and former Conservative Party donor Michael Samuel, a millionaire businessman and friend of Princess Diana who reportedly remained close to Prince William after her death. 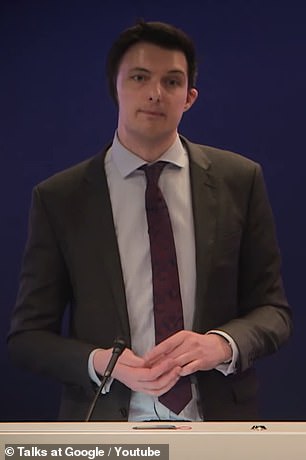 Moy, a former House of Lords researcher, suggested the idea for an independent fact-checking organisation having become disillusioned about inaccurate briefings from political staff and lobbyists within Westminster.

Samuel had been concerned about accuracy in public debate for a number of years and is understood to have helped fund Full Fact’s launch.

The charity publishes its funding online and last year received £664,000 and Google was the top donor, giving them £230,000 in total – more than a third of all their funding.

The second largest donor is Omidyar Network, who paid £115,000 towards developing Full Fact’s ‘automatic’ checking software and set up by Pierre Omidyar, the American billionaire founder of eBay.

In 2019 Full Fact started working with Facebook after criticism about how the social network has handled the spread of misinformation on its platform. 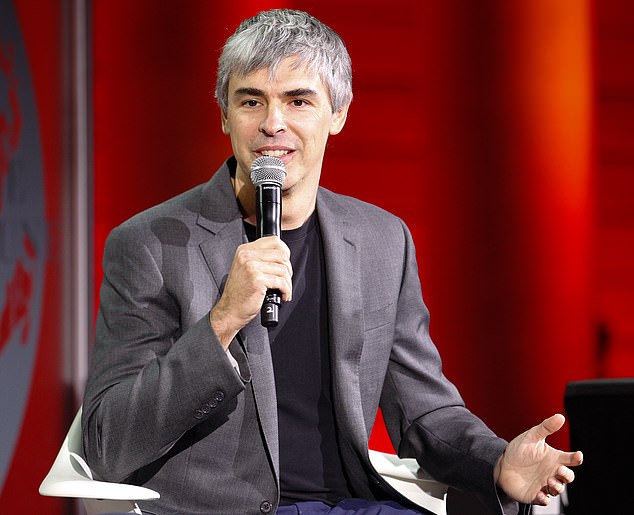 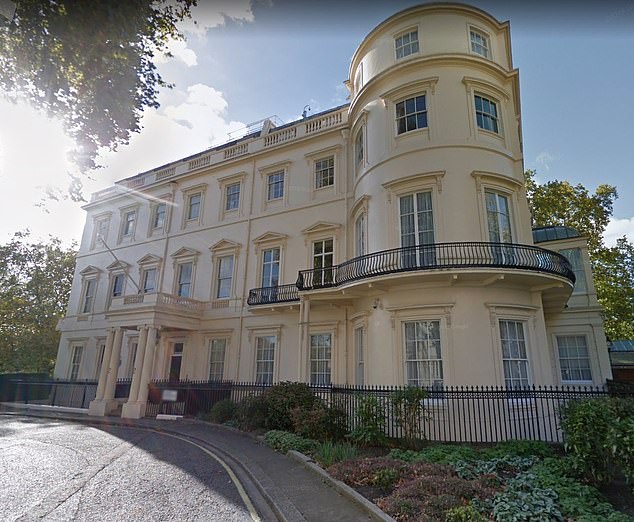 Mark Zuckerberg’s business handed over £132,000 [$171,800] in the first six months of this year, and is expected to take Full Fact’s income towards £1million this year.

Full Fact started with Mr Moy but now as 19 staff, including journalists who previously worked for the BBC, Guardian, BuzzFeed, and a number of academics, based in a grand office overlooking St James’ Park and close to Buckingham Palace.

The team review items flagged by users and rate them based on their accuracy – and insist they have safeguards ‘at every level’ to ensure they stay neutral.

Anyone who works there is allowed to be a ‘non-active member of a political party’ – but is banned from saying publicly how they vote or express support for any political party.

In 2013 Full Fact started work on Automated Factchecking and in 2016 started working with Google to rate the veracity of facts stories, images and videos using their own software.  They are also researching how machine learning and AI can improve the work we do.

They were also a major player during the 2014 Scottish Independence campaign, the 2016 EU referendum campaign and the 2017 general election campaign.

Defending their impartiality Mr Moy told MailOnline: ‘We’re an independent and impartial charity with a cross-party board. We publish details of all our funders who donate more than £5,000 a year. No donor has any say over how Full Fact is run, what we fact check or publish.

‘We don’t ask people to take our word for any conclusion we make. We provide links to all sources so that readers can check what we’ve said for themselves.”

‘Every party and candidate campaigning in this election is asking people for their trust. Ultimately voters will decide’.

Foreign Secretary Dominic Raab insisted the party did not need to apologise for countering the ‘lies’ that were ‘serially and systematically’ put out by Labour and its allies.

He said ‘no-one gives a toss’ in the wider public about the ‘cut and thrust’ as they just wanted to know about the ‘substance of the issues’.

‘We are not going to be a punchbag for the nonsense put out by the Left that goes unchallenged,’ he said in a round of broadcast interviews. 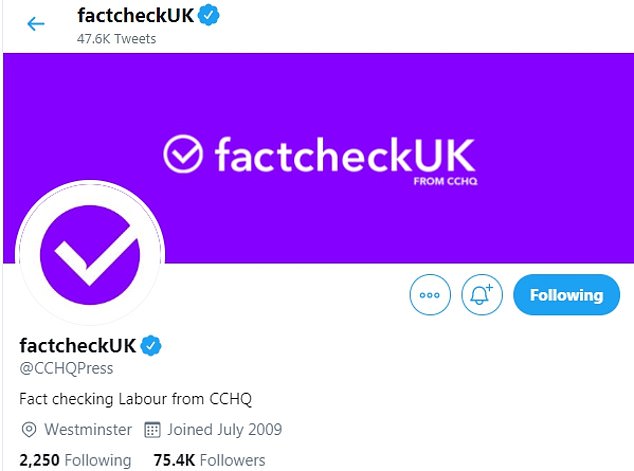 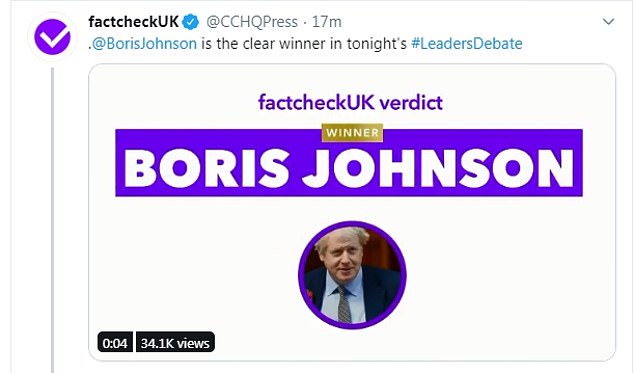 Unsurprisingly, the FactCheckUK verdict was Boris Johnson was the ‘clear winner’

Meanwhile, it has emerged that Labour also runs a branded Twitter feed, ‘The Insider’, which promises to provide ‘facts you can trust’.

The combative response from the Conservatives came despite the social media platform warning that its official press office account would face ‘decisive corrective action’ if there is a repeat of the stunt.

The party changed the name to factcheckUK during the debate last night.

Critics claimed the messages praising Boris Johnson could have been coming from an independent fact checking organisation, rather than the Tories – although the party pointed out that its handle had remained ‘@CCHQPress’ throughout.

Labour’s Dawn Butler said Twitter should have deactivated the account. ‘They could have just suspended the account and taken it down,’ she told BBC Radio 4’s Today programme.

‘To me, that would have been the better punishment.’ 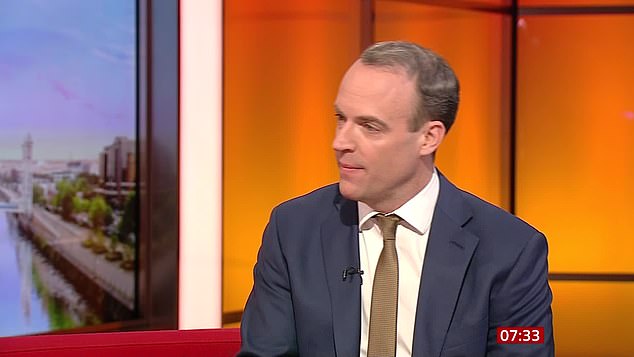 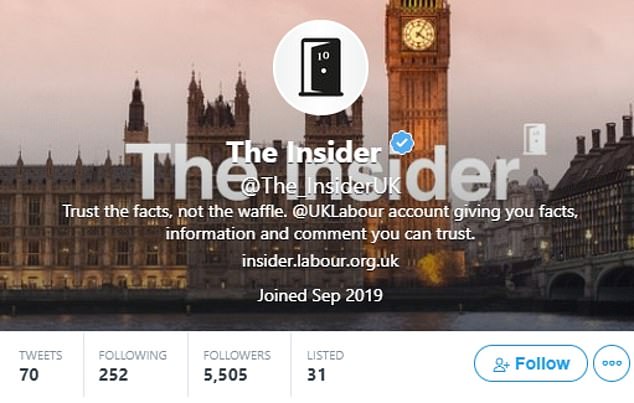 Iit has emerged that Labour also runs a branded Twitter feed, ‘The Insider’, which promises to provide ‘facts you can trust’

The microblogging site warned the Conservative Party about their actions which were in breach of the company’s terms and conditions.

According to the company: ‘Twitter is committed to facilitating healthy debate throughout the UK general election.

‘We have global rules in place that prohibit behavior that can mislead people, including those with verified accounts.

‘Any further attempts to mislead people by editing verified profile information – in a manner seen during the UK Election Debate – will result in decisive corrective action.’

The Tory Party stunt was widely criticised, including by fact-checking organisation Full Fact.

‘Please do not mistake it for an independent fact checking service such as @FullFact, @FactCheck or @FactCheckNI.’

The @CCHQpress account is verified by Twitter, displaying a blue tick which is intended to denote that a user is genuine.

The Liberal Democrat press office posted an image suggesting they were reporting the account to Twitter for ‘pretending to be me or someone else’. 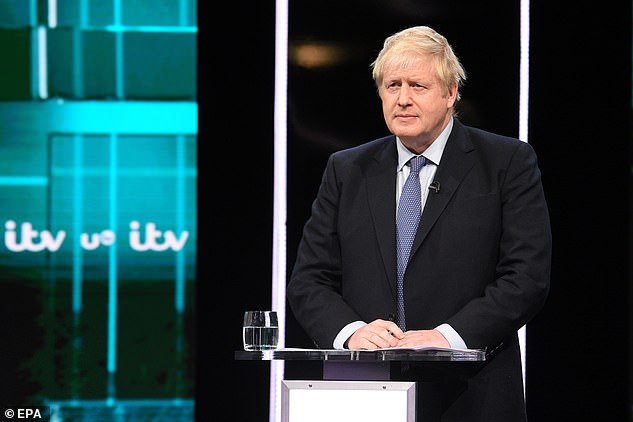 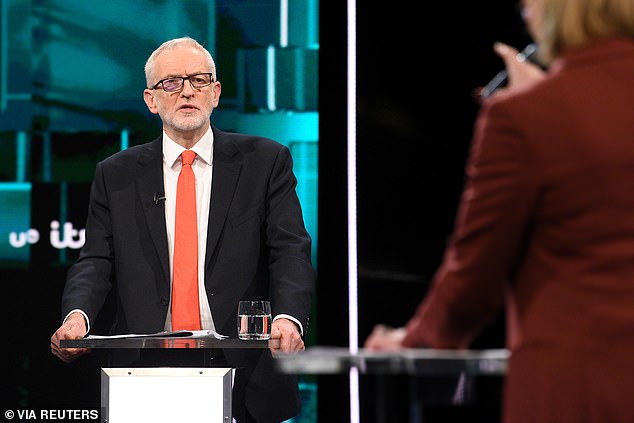 They tweeted: ‘And people wonder why trust in politics has been eroded @CCHQPress’.

Labour’s David Lammy tweeted: ‘The Conservative Party press office @CCHQPress rebranding themselves as ‘FactCheckUK’ shows what disdain this party and this government has for the truth.

‘The Electoral Commission must investigate and punish this blatant attempt to decieve the public.’

He said: ‘The Twitter handle of the CCHQ press office remained CCHQ Press, so it’s clear the nature of the site. The reason we did that was to call out the inaccuracies of the lies that were coming out during the debate – the NHS is not for sale. It has never been for sale, it will not be for sale.’

Mr Cleverly said it was the party’s digital team who decided to change the name of their Twitter feed during the debate.

He said: ‘The digital team have a remit. I set the remit. They work within that remit. I am absolutely comfortable with them calling out when the Labour party put out complete fabrication in the public domain and we will call that out whenever they do it.’