Hailey Bieber has made no secret of the fact she looks to Princess Diana for style inspiration, with the model even doing a copy-cat photoshoot for Vogue Paris in 2019.

But over the years, the 26-year-old has increasingly turned to the royal’s signature low-key looks when putting together her own casual ensembles.

Just this week, the starlet once again stepped out in an outfit that prompted a slew of comparisons to Princess Di – but it is far from the first time she has taken a leaf out of the royal’s lookbook.

The late mother of Prince William, 40 and Prince Harry, 38, knew how to pick a look and make it work for her busy royal life, capturing the world’s attention every time she stepped out.

Indeed, the ‘people’s princess’ has remained a fashion icon to millions across the globe, and many have spotted the way Hailey, 26, consistently channels the late royal’s effortless off-duty style. 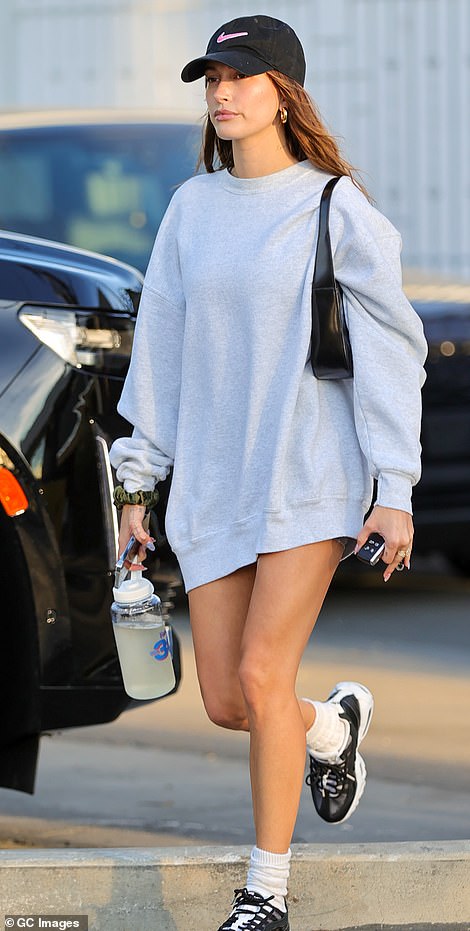 This week, Hailey Bieber stepped out (right) in an outfit reminiscent of the low-key looks Princess Diana (seen left in 1994) became so famous for modeling – but it is far from the first time the Hollywood star has taken style inspiration from the royal 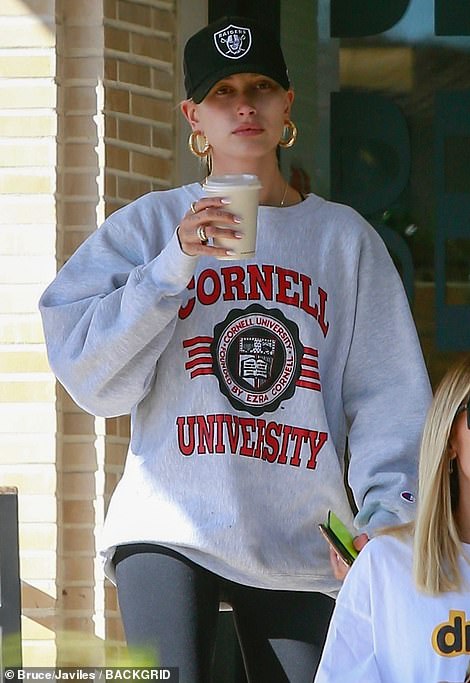 When it came to Princess Diana, each one of her outfits was an event in itself – as proven by the fact she could capture the world’s attention every time she stepped out to workout.

Since becoming a name in the fashion industry, Hailey has also been celebrated for her street style, with the model’s everyday uniform usually consisting of oversized tailoring and cycling shorts.

In fact, many beady-eyed fashion lovers have noted the way her casual ensembles draw direct inspiration from Princess Diana – and it’s no coincidence.

Speaking to Harper’s Bazaar in August, Hailey gushed about the Princess Diana expressed herself through style, despite being one of the most photographed women in the world. 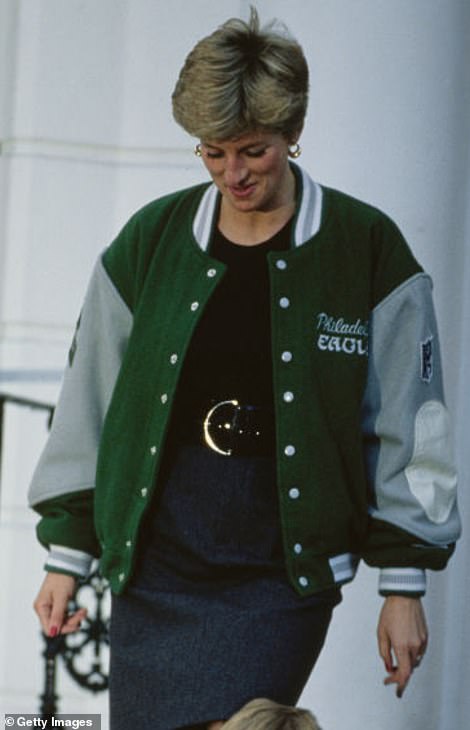 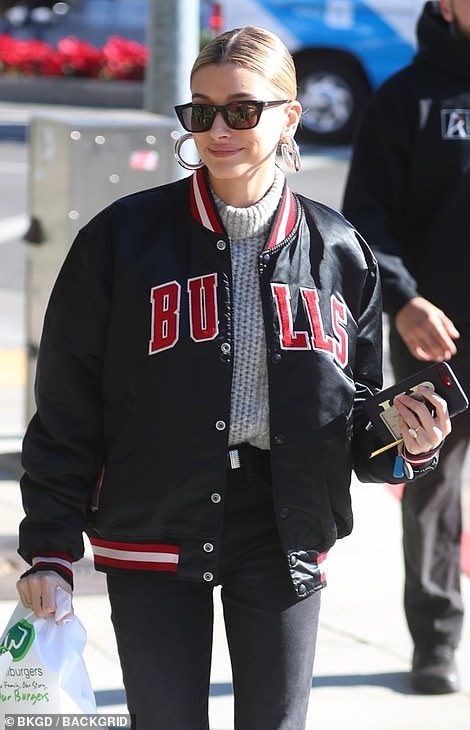 It’s not just Diana’s baggy sweater and bike short combo that the model likes to copy. Hailey (pictured in 2019) also takes inspiration from other looks including the late royal’s love for letterman jackets (pictured in 1991) 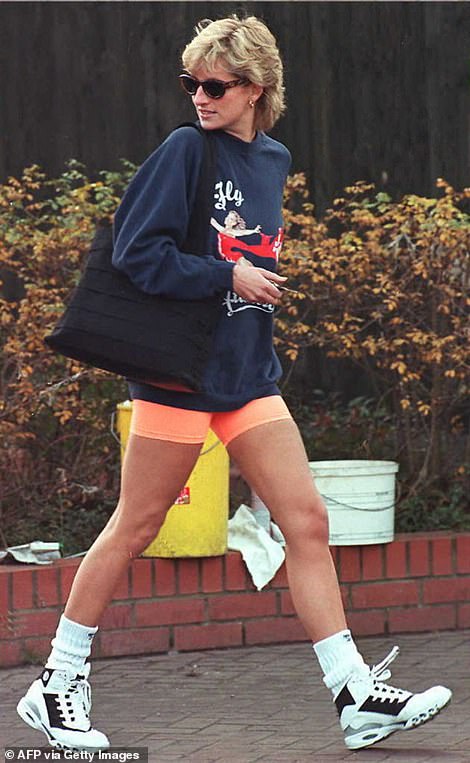 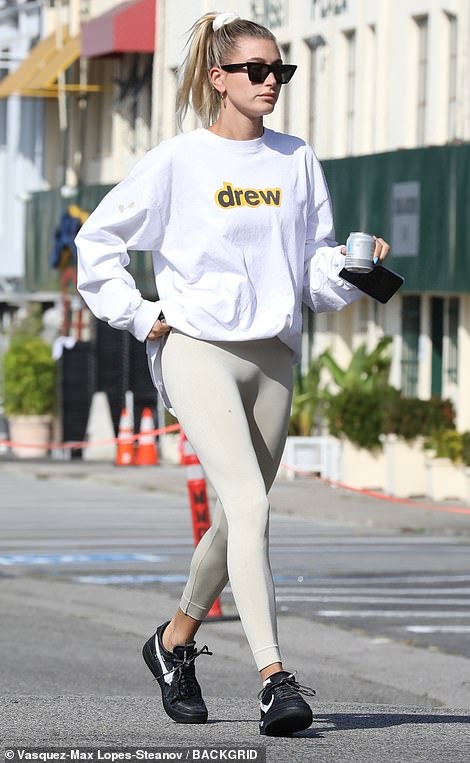 Hailey (pictured in 2019) has a clear affinity for lounge and athleisure items like sweats, bike shorts and leggings – meaning she easily pulls off the preppy-casual attire loved by Diana (pictured in 1995) 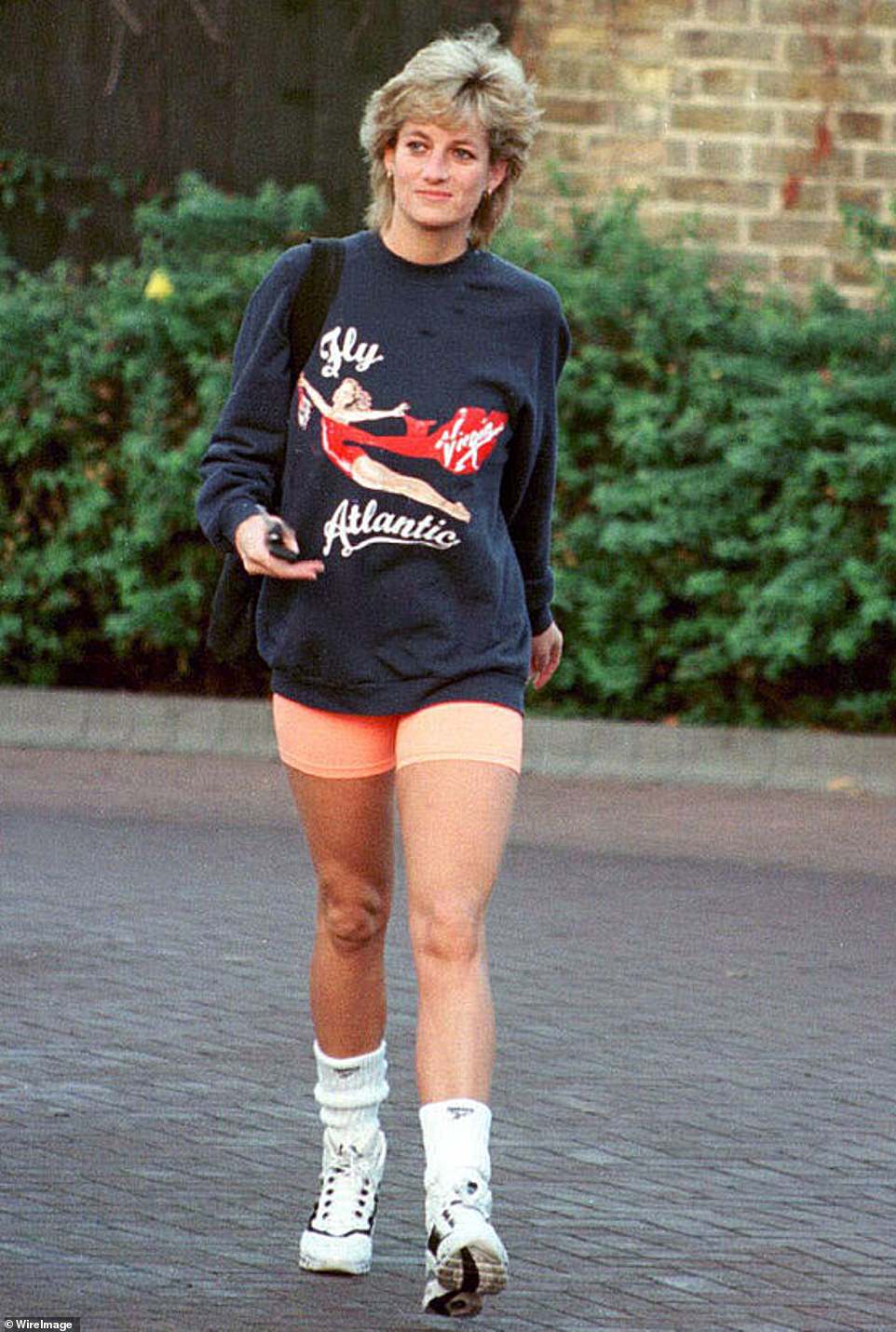 This iconic Virgin Atlantic sweatshirt worn by Diana sold for $53,532 in 2019 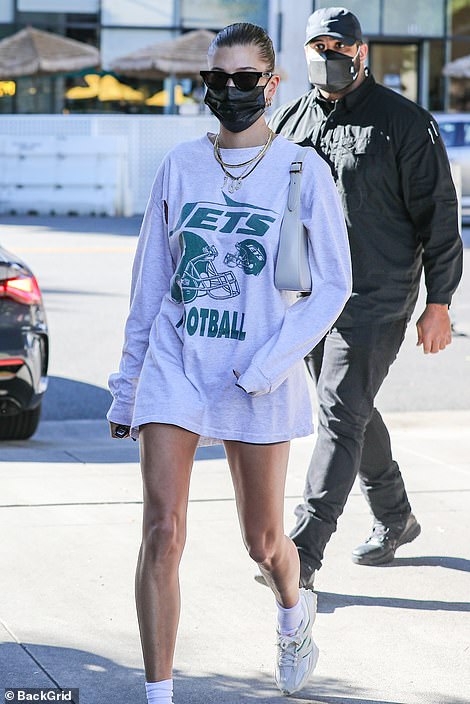 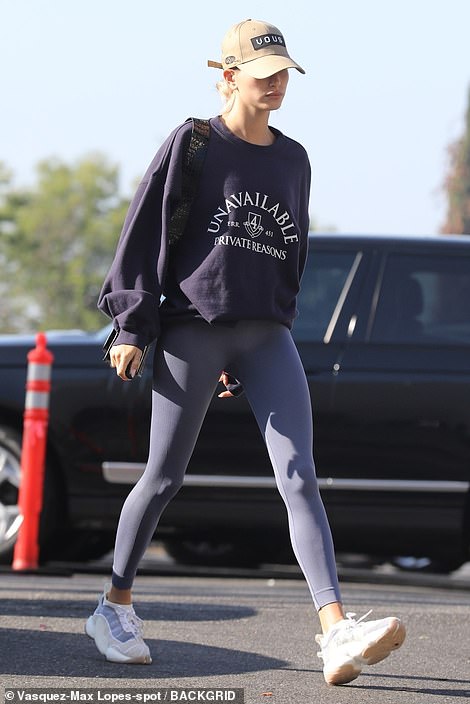 She began: ‘I was really inspired by the fact that she was the most-looked-at woman in the world at that time, of all time, and she did what she wanted with her style.

‘She really expressed herself through her style despite being in the position she was in.’

Hailey went on to talk about the media attention and the paparazzi she encounters on a daily basis as she continued: ‘I get photographed so much that I feel like sometimes I put pressure on myself. If I’m just throwing on jeans and a T-shirt, I want it to be a dope pair of jeans and a great T-shirt!’

However, the model often updates the look with oversized sweaters that cover her shorts, or swapping the shorts of leggings instead. Elsewhere, she swaps out Princess Diana’s trusty trainers for fluffy sandals. 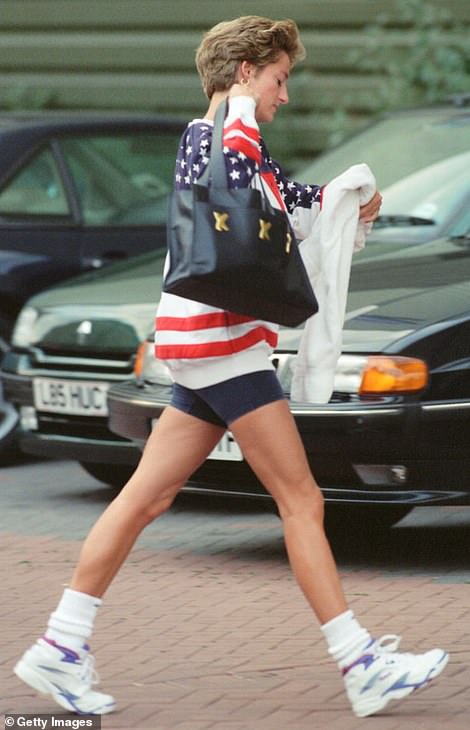 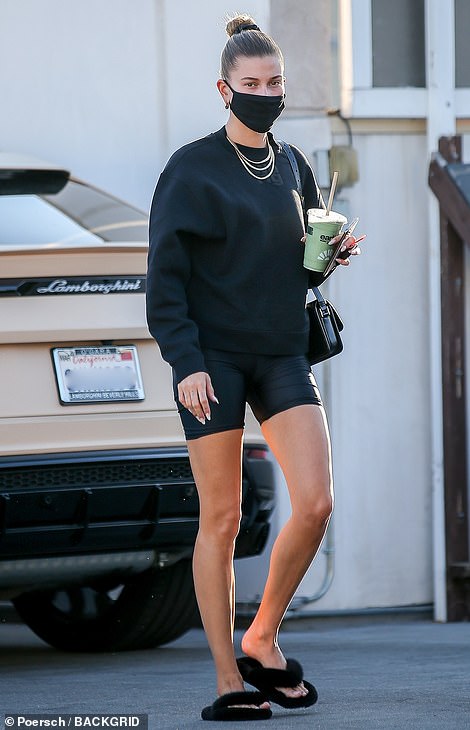 The model (pictured center in 2020 and right in 2021) often updates Diana’s look (pictured left in 1994) with oversized sweaters that cover her shorts, or by swapping the shorts for leggings

The model (pictured in November 2022) is also a fan of oversized coats with large shoulder pads, a look which was often seen on Princess Diana (pictured in 1996) during her casual outings

Harper’s Bazaar recently praised the way Hailey has worked to make the style her own, stating: ‘Though Bieber’s looks are hypercontemporary, her approach is ultra old-school. She dreams up different ‘vibes’ (to use her favourite word) for trips and events, whether it’s a vacation in the Northwest or a friend’s wedding.

‘Her process is true fashion-icon behavior. In fact, it recalls that of Diana, to whom Bieber paid tribute in a magazine shoot in 2019 and who also made carefully considered fashion choices with whimsy and ease.’

Back in August 2019, Hailey shared images from her Vogue Paris photo shoot, which was inspired by Princess Diana’s off-duty style while she was running errands in London.

Hailey was clearly thrilled to have been given the opportunity to step into Princess Diana’s shoes, describing the royal as ‘amazingly beautiful and iconically stylish’ on Instagram as she shared images from the shoot.

‘All credit and inspo to the amazingly beautiful and iconically stylish Princess Diana who I’ve looked to for style inspiration for as long as I can remember,’ Hailey wrote.

She added: ‘Thank you for leaving behind such an iconic fashion and style legacy.’

The model was photographed by Vogue Paris in 2019 for a shoot in which she channeled Princess Diana, recreating paparazzi images that were taken of the royal in the 1990s

The photo shoot sought inspiration from pictures of Diana in the ’90s, including one of her attending the Guards Polo Club (right) 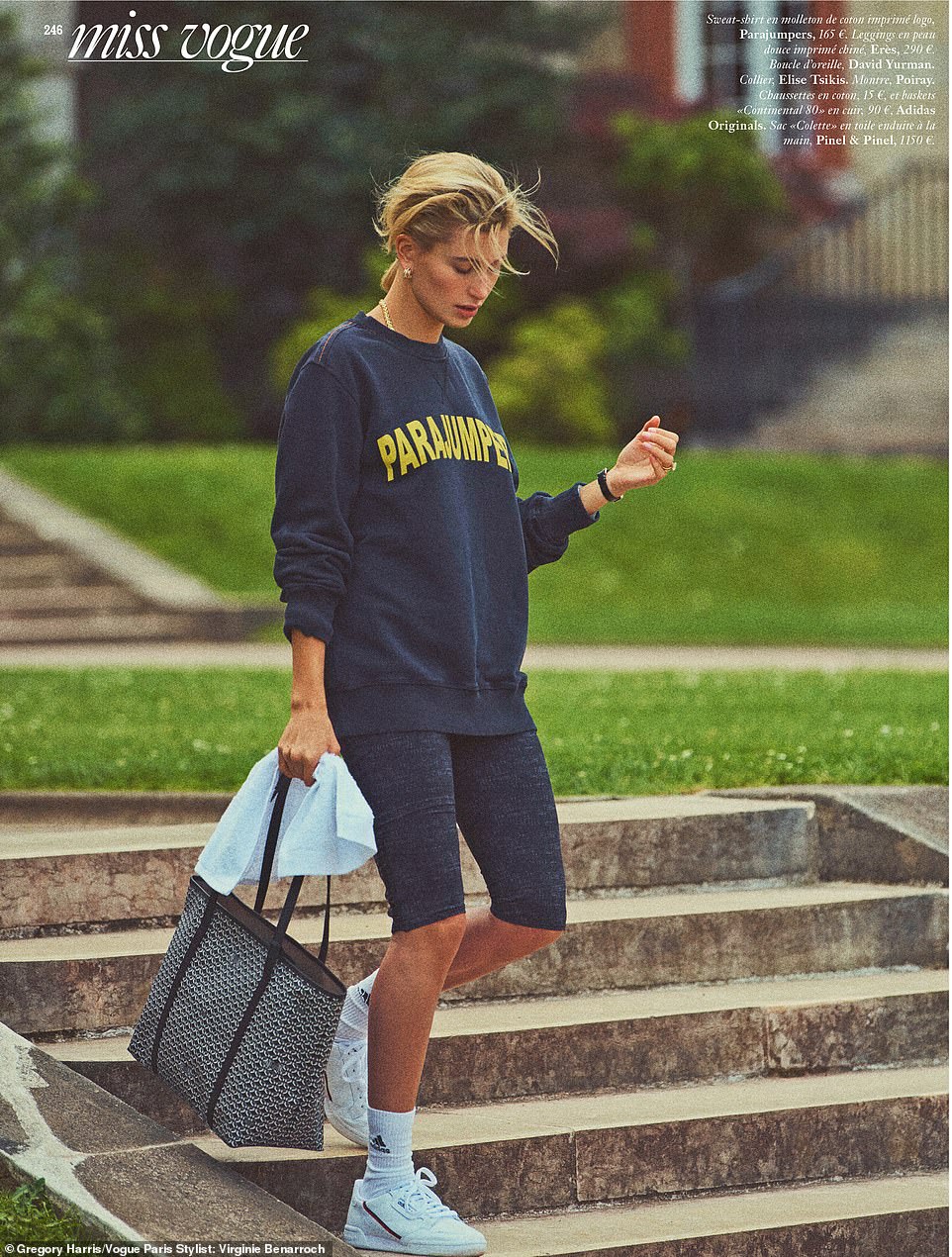 The images were met with mixed reactions online at the time, with some praising the tribute while others claimed shoot is insensitive

The photo shoot involved Princess Diana’s more causal moments from when she was snapped by the paparazzi in the ’90s, including one moment of her holding her car keys in her mouth while digging through her bag.

Hailey then mimicked this look for the photo shoot by also placing car keys in between her teeth. 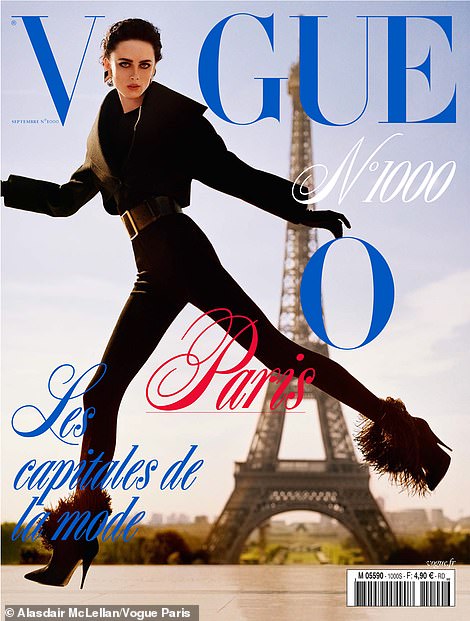 The images appear in an issue of the French magazine

The outfit was then made similar with biker shorts, which Diana was known to wear around town, and an oversized sweatshirt.

She then paired the look with ankle socks and tennis shoes, both of which Diana was pictured wearing.

For hair, Hailey left her short blonde locks messy and pushed back to mirror that of Princess Diana during the time.

Another paparazzi picture Hailey was inspired by for her shoot with Vogue involved Princess Diana wearing blue jeans with cowboy boots and an oversized blazer to the Guards Polo Club in Berkshire.

Hailey mirrored the outfit with modern alterations but created an overall look similar to what Diana, even down to the baseball cap.

‘I was never a fan of Hailey Bieber until NOW,’ one person wrote after seeing the new shoot. ‘She is absolutely killing it in each and every photo, serve that Princess Diana vibe gal.’

Another fan thought it was the ‘best shoot’ Hailey has participated in since the beginning of her career. ‘This shoot was so sophisticated and spot on with the inspiring of Princess Diana,’ they wrote.

The model isn’t the only one known to channel Princess Diana, as Kate Middleton, 40 and Meghan Markle, 41, have often turned to their husband’s late mother for fashion inspiration.