How high-energy rays can ward off strokes

By Carol Davis For The Mail On Sunday

A breakthrough treatment that blasts hundreds of high-energy rays into the brain with pinpoint accuracy may prevent devastating strokes in thousands of Britons.

The 45-minute Gamma Knife procedure is already used to treat hard-to-reach brain tumours. But now it is being offered to those with tangled, weakened blood vessels in the brain – a condition called arteriovenous malformation, or AVM.

The problem, which increases the risk of a type of stroke caused by bleeding in the brain, affects about 58,000 Britons. The majority of sufferers are thought to be born with the fault, although it is not believed to be passed down through families.

A hi-tech surgery could help prevent devastating strokes by fixing weak and tangled blood vessels in the brain before they rupture, killing off surrounding tissue

In many instances it causes no symptoms and the majority of cases are picked up incidentally while patients are being tested for other reasons, or once the AVM ruptures. Once spotted, treatment is crucial as the tangle forms a bundle, making vessels more likely to burst, with potentially fatal consequences.

In patients who have already suffered a bleed in the brain, it can be used to prevent further ruptures and strokes. Previously, the only option was to remove the growth via intensive surgery, risking damage to nearby regions in the brain that control vision, speech and movement, as well as death. Doctors can also block off the blood supply to the tangled blood vessels – preventing it from growing – by creating a blockade with medical ‘superglue’. This starves the growth of oxygen, causing it to shrink, but it still involves a lengthy and risky operation.

With Gamma Knife, no incisions are needed. Neurosurgeons at Great Ormond Street Hospital in London say the procedure has a 90 per cent success rate. ‘For patients with an AVM, there is a two to three per cent chance of a bleed each year,’ says Greg James, consultant neurosurgeon at Great Ormond Street Hospital, who is carrying out the new treatment. ‘Many of our patients are healthy junior school children and that lifetime risk is just too high. It’s a ticking time bomb and we need to treat it.’ 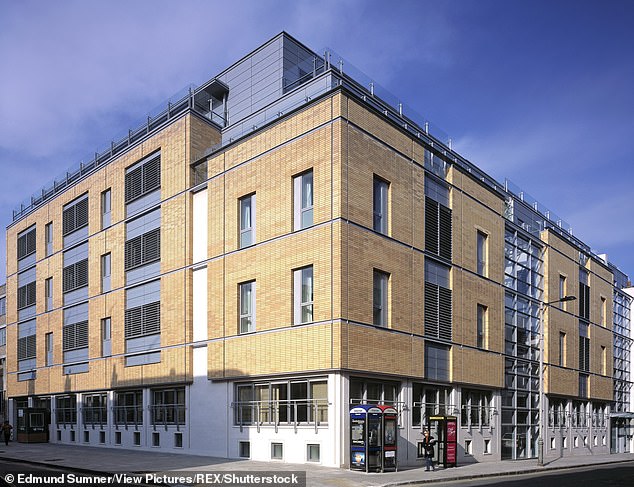 Neurosurgeons at Great Ormond Street Hospital in London say the procedure has a 90 per cent success rate Patients are born with AVM, which surgeons describe as ‘a ticking time bomb’

During the procedure, Gamma Knife rays are delivered through a metal helmet. The energy causes the knot of blood vessels to shrink to a ball over a couple of years. Damage to the sensitive brain areas is less than that caused by other radiation therapies due to the precision of the beams. AVMs are thought to be caused by a problem with blood vessels’ development in the womb.

One patient to benefit is Isabella Fraser-Corbridge, 17, from Southampton. She was referred to Mr James in Great Ormond Street after suffering a stroke in June 2017. Scans revealed that it was caused by a large AVM. ‘I’d been a competitive swimmer at national level, but suddenly I wasn’t allowed to exercise,’ says Isabella.

With Isabella at high risk of another stroke, Mr James recommended the Gamma Knife procedure, which she underwent in October 2017. During the operation, scans locate the growth, with images beamed back to a computer, allowing doctors to programme the direction of the beams. The patient’s head is placed into the helmet which fires the beams into the brain. Hundreds enter from different angles, converging in the middle of the growth.

‘It is like magic,’ says her mother, Claire Corbridge, 51. Isabella did, however, have intense headaches last year, a known side effect of Gamma Knife, which meant she had to give up college temporarily. But it was a small price to pay. ‘I’m just so grateful that the growth has gone,’ she says. ‘I’m planning to go back to college in September. In the meantime, I’m coaching swimming and hoping to get back to competitive swimming at county level.’