How hotels across the UK have been helping our Covid heroes

Hotels’ reward for our Covid heroes: The extraordinary ways hotels across the UK have been helping their local communities through the pandemic

Every week our Holiday Hero Neil Simpson takes an in-depth look at an important holiday topic, doing all the legwork so you don’t have to. This week: the hidden heroes in our finest hotels.

In hotels across the country, from city-centre sites to country house spas, staff are finding extraordinary ways to help their local communities through the pandemic.

Several celebrity hoteliers won praise from the start, including former footballers Gary Neville and Ryan Giggs, who gave NHS staff free use of every room in their two Manchester hotels when lockdown began.

Reaching out: Staff at the Berkeley Hotel drive-through offer meals to emergency responders

Since then, big-name hotels including London’s Claridges have welcomed NHS staff into rooms, while nearby Berkeley Hotel launched a drive-through so police, ambulance and other emergency services staff could get free food and drink from its kitchens.

But all around the country, other initiatives are taking place far below the radar…

Boutique Seaham Hall hotel and spa in County Durham reopened its kitchens and now cooks about 400 meals a week for local hospitals, while London’s Strand Palace Hotel delivers food to ambulance control rooms across the capital.

In Cornwall, kitchen staff at The Railway Hotel in Saltash don’t stop at preparing food for needy locals. They’ve also set up a shopping service for self-isolating neighbours.

Other hotels are donating items they don’t need while rooms are empty. The Mandeville Hotel in London puts shampoos, conditioners and toothbrushes from guest bedrooms into ‘wellbeing boxes’ for staff at nearby St Mary’s Hospital. Meanwhile, Rockliffe Hall, on the edge of the North York Moors, offers shower gels and other goodies from empty rooms to patients at Darlington Hospital.

The Cary Arms hotel and spa in Torquay decided to do some good with different bits of kit it didn’t need during lockdown, such as donating excess cleaning supplies to local families in need, while Gravetye Manor in East Sussex bunched up thousands of tulips it had earmarked for rooms and donated them to staff at the nearby Queen Victoria Hospital.

Many hotel groups say they will support staff in whatever charitable activities they choose. That led to the Bespoke Group helping staff at Oddfellows Chester and Cotswold House hotels prepare boxes of sandwiches, scones and cakes so they could serve afternoon tea at care homes. 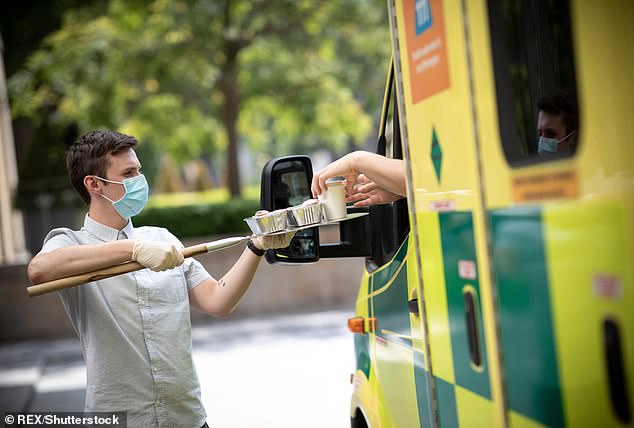 In hotels across the country staff are finding extraordinary ways to help their local communities through the pandemic.  Pictured is staff from Berkeley Hotel feeding London’s key workers

For hotels in the Blue Orchid group, including Tower Suites by London’s Tower Bridge, the result was a ‘Here To help’ initiative to deliver anything from food to books to vulnerable locals.

At the Best Western chain, which had already offered 15,000 rooms to NHS staff, staff wanted to focus on those isolated by the pandemic. So if customers nominate someone who is on their own, the company sends a handwritten letter as part of its Wave With Words scheme.

In Scotland, the seven-strong Cerar Group, which includes the Loch Fyne Hotel, also expanded its offering after talking to staff, promising free weekend stays to NHS staff when the crisis is over. Now it’s teaming up with local businesses to provide free experiences from boat trips to whisky tastings.

Finally, a host of hotels are joining forces to give free nights to key workers when the time is right. Find out more about this scheme by visiting nwightsonus.org and mytravelpledge.com.