School caretaker Ian Huntley, 45, was sentenced to two life terms over the murders

Ian Huntley made five key errors which saw him face justice over the murders of Holly Wells and Jessica Chapman, a new TV documentary has revealed.

The 45-year-old school caretaker killed the ten-year-old girls at his home in Soham, Cambridgeshire, in August 2002, in a case that shocked Britain.

Now, a new Channel 5 programme has revealed the five mistakes Huntley made – which included asking a police officer how long DNA lasted for, and getting new tyres put on his old Ford Fiesta after dumping their bodies in woodland.

The documentary also sees police admit the haunting photograph they issued of the girls wearing matching Manchester United shirts was a mistake, because it prompted global public interest that put the investigation under huge pressure.

Holly and Jessica had been at a family barbecue when they went to walk to a nearby shop for sweets – and their bodies were found nearly a fortnight later in a ditch. 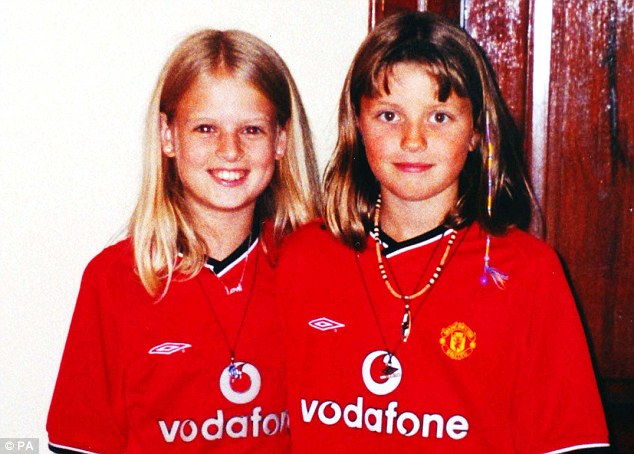 Holly Wells (left) and her best friend Jessica Chapman (right) pictured in their Manchester United shirts shortly before they disappeared in Soham, Cambridgeshire, on August 4, 2002 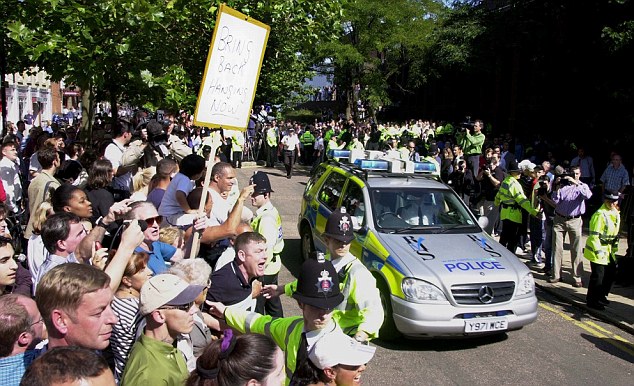 Police hold back an angry mob who scream abuse as the convoy carrying Maxine Carr outside Peterborough Magistrates’ Court in 2002, with one banner saying: ‘Bring back hanging now’

The girls’ families were subjected to a full court hearing in 2003 because Huntley refused to plead guilty – but he was eventually sentenced to at least 40 years in jail.

Huntley’s girlfriend Maxine Carr, a teaching assistant at the girls’ school, was jailed for three-and-a-half years after being convicted of perverting the cause of justice. 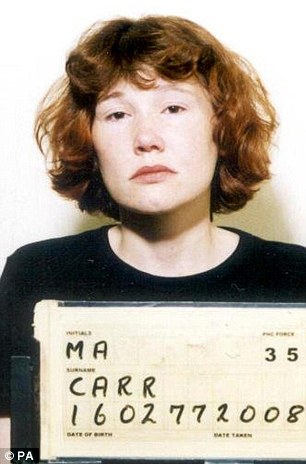 Detective Chief Superintendent Chris Stevenson, who was made lead investigator on the case nearly a fortnight after the girls vanished, was interviewed for the new programme, ‘Five Mistakes that Caught a Killer’.

He told the show: ‘It is easy to look back in hindsight and see that by using the media to publicise the disappearance of these two girls and spread it almost worldwide was a mistake.

‘One of the first things I did when I took over was to refocus the investigation into the immediate locality. It is a standard phrase to clear the ground under your feet and I didn’t feel that that had been done.’

The documentary also looked at the five errors that saw Huntley face justice – the first being how he started to enjoy speaking to the media.

This backfired on him after people in his old hometown of Grimsby in Lincolnshire recognised him as someone who had been linked to sex attacks on women. 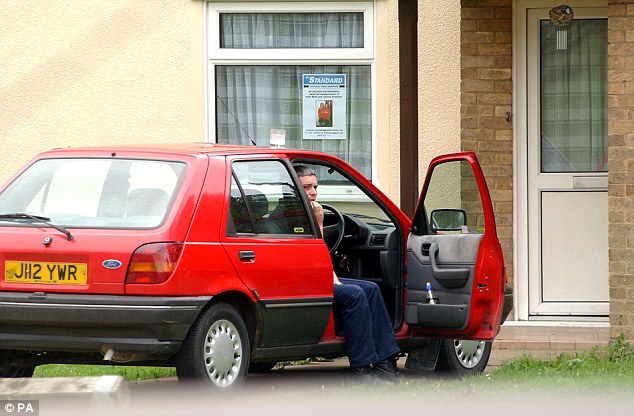 Huntley got new tyres put on his old Ford Fiesta car, which aroused suspicion and led to police investigating the vehicle. He is pictured sitting his his car outside his home on August 8, 2002 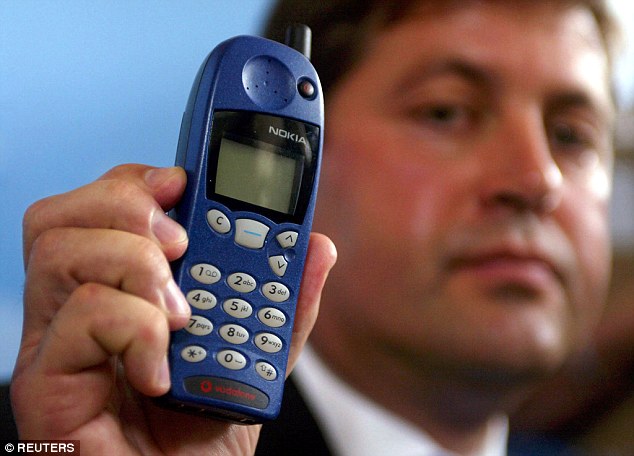 Jessica’s mobile phone was switched off on the day she vanished – with the signal showing it was at Huntley’s house at the time. A detective holds a replica of the phone in August 2002 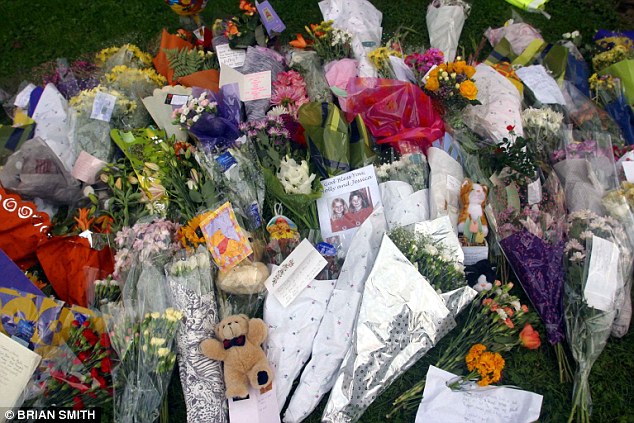 Carr also dropped a hint when she started speaking about the girls in the past tense while speaking to the BBC, prompting the interview to be halted and then restarted.

His second mistake regarded Jessica’s mobile phone, which was switched off on the day she vanished – with the signal showing it was at Huntley’s house at the time.

The third error saw Carr tell police she been with Huntley for the whole day when the girls vanished, but mobile records showed she was 100 miles away in Grimsby.

Police believe he then returned to the woods where he had dumped the bodies, cut off their distinctive football shirts and tried to burn them to destroy DNA evidence. 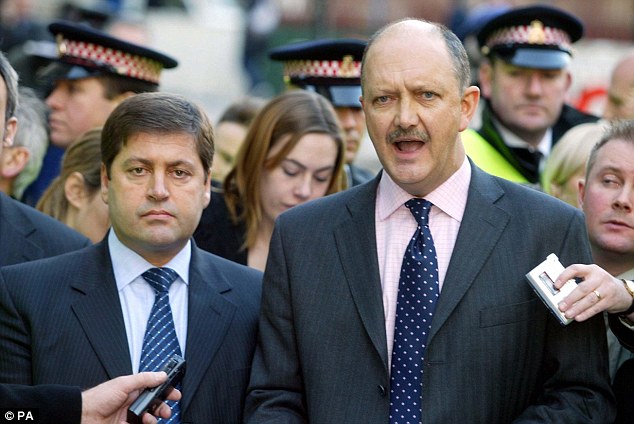 Detective Chief Superintendent Chris Stevenson (right) speaks outside the Old Bailey on December 17, 2003 on the day Huntley was jailed for life for the murders of Holly and Jessica 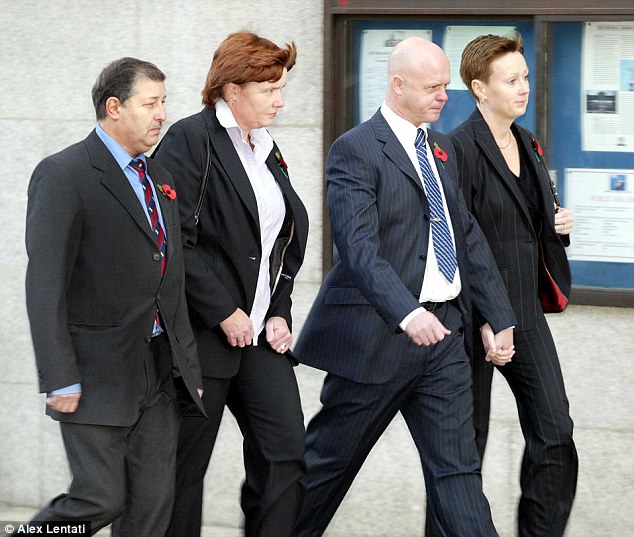 The parents of murdered Soham schoolchildren Holly Wells and Jessica Chapman, Kevin and Nicola Wells, and Sharon and Leslie Chapman, arrive at the Old Bailey during the trial in 2003 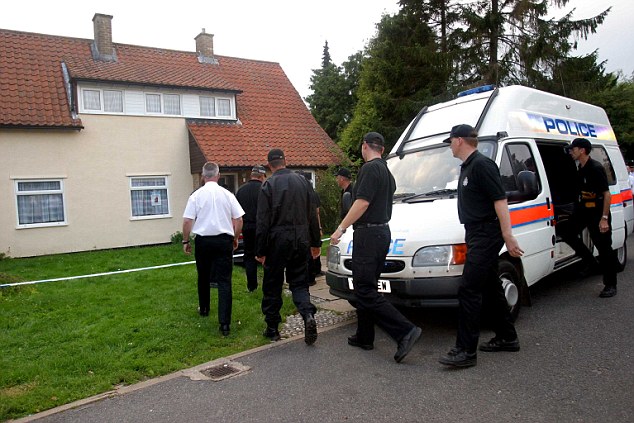 He then put the shirts in a bin at the school, before covering them with a rubbish bag – believing police had already searched the school so would not do so again.

However, officers did search the school again and found the girls’  lothes ‘in such a condition that there really was no hope of finding the girls alive’, Ms Gilbert said.

Huntley’s fifth mistake was getting new tyres put on his old car after dumping the bodies, which aroused suspicion and led to police investigating the vehicle.

They then found there was chalk underneath his Ford Fiesta which was a match for chalk on the lane leading to where the bodies were found in woodland.

Last year, Huntley pleaded for forgiveness, claimed he thought about the girls every day and apologised for the pain he caused his family and those of the victims.

Huntley: Five Mistakes that Caught a Killer is on Channel 5 at 10pm tomorrow

Chilling and calculated: How Soham killer Ian Huntley courted the media after murdering his schoolgirl victims

Schoolgirls Holly Wells and Jessica Chapman, both 10, had been at a family barbecue on 4 August 2002, when they went to walk to a nearby shop for sweets.

It was the last time their families saw them alive.

Over the coming two weeks, their parents made appeals for their safe return while Cambridgeshire Police launched one of the biggest inquiries ever mounted. Hundreds of people volunteered to help support the effort.

Throughout, Huntley, a caretaker at Soham Village Collage, and his partner, their teaching assistant, Maxine Carr, gave endless media interviews appealing for the safe return of ‘two of the brightest, loveliest little girls in the world’.

Carr even showed off an end-of-term card the girls had sent her, covered in loving comments and kisses.

A wan-faced Huntley repeatedly spoke of how he was the last person to see the girls before their apparent disappearance. He also helped organised community events to help the search effort.

The truth was that he had lured the girls into the home he shared with Carr, as they passed by.

He has never fully revealed what took place there, but within an hour both girls were dead.

Then he hid their bodies near RAF Lakenheath in Suffolk, six miles away, and later returned to set fire to them

In court, he would lamely claim that he accidentally knocked Holly into a filled bath while helping her deal with a nosebleed, and she drowned.

When Jessica began to scream he insisted he ‘accidentally’ strangled her while stifling her cries.

Carr, although not implicated in the murder, gave him an alibi insisting she was with him.

When he and Carr finally faced trial in December 2003, Huntley was sentenced to two life terms, with a minimum 40-year tariff.

Carr received a three-and-a-half-year sentence for perverting the course of justice. She was released after 21 months in May 2004, given a new identity and has since had a child of her own.