The family photo shows Jemima and three fresh-faced youngsters lined up in colourful ponchos, like a band of conquistadors.

Posted on the family Instagram account during a holiday in Mexico earlier this year, the caption reads: ‘Mis Queridos’ — my dear ones.

Jemima Goldsmith and her two sons, Sulaiman and Kasim, are easily identifiable. But not everyone would recognise the pretty young woman in the picture.

Seen with Jemima again earlier this month, at Loulou’s private members’ club in Mayfair, she is Tyrian White, the daughter of Imran Khan, the newly elected Prime Minister of Pakistan.

Now 26, she was born to Imran in June 1992, three years before his marriage to Jemima, the result of an affair with Sita White, a beautiful but troubled heiress.

At the outset, Imran, having already decided that it was his destiny to lead Pakistan, and mindful of the view concerning children born outside marriage in his deeply conservative Muslim country, publicly denied that Tyrian was his.

Jemima Goldsmith (left) has been like a second mother to her ex-husband Imran Khan’s love child Tyrian White (right). Now 26, she was born in June 1992 after he had an affair with Sita White three years before Jemima and he married 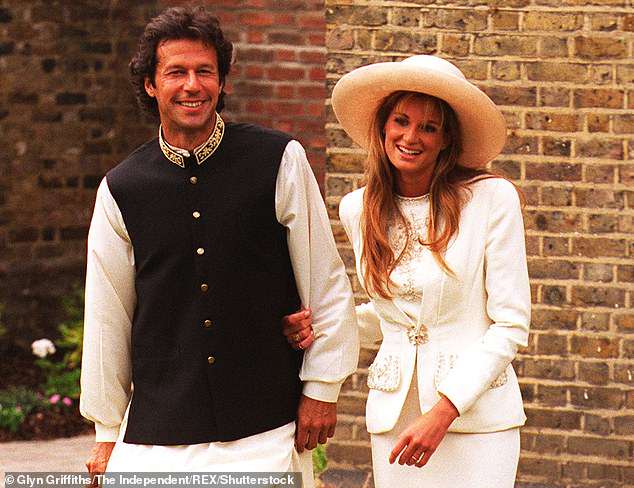 Although Imram and Jemima, pictured on their wedding day, split in 2004, she has been a constant in her life since the death of her mother Sita. Jemima, Tyrian, and Jemima’s two sons Sulaiman and Kasim are an unbreakable unit

Her early years were tumultuous, marked by Sita’s determination to have Imran recognise Tyrian as his biological daughter. In 2004, seven years after a judge declared Imran to be Tyrian’s father, Sita suddenly died, aged just 43.

After a flurry of stories speculating about Tyrian’s future, the little girl with the soulful brown eyes faded away from public view. What happened next may seem surprising, given her unsettled start in life. For it is Jemima, the Mail reveals today, who has replaced Sita as the mother figure in her life.

Even though Jemima divorced Imran in 2004, she has been a constant in Tyrian’s life following Sita’s early death and regards her as her daughter. Publicly, Jemima refers to Tyrian as her ‘stepdaughter’, but that is simply out of respect for Sita.

Indeed, as that charming picture in Mexico illustrates, they’re an unbreakable unit of four — Jemima, Sulaiman, Kasim and Tyrian.

‘Tyrian is like a daughter to Jemima,’ says a family friend. ‘They are extremely close. She also has a good relationship with her brothers Sulaiman and Kasim, and Jemima’s brother Ben.’

Tyrian divides her time between New York and the UK, and when she is over here, she lives with Jemima at her Oxfordshire estate. That Tyrian is so much part of the family is no secret, but she is a private person who is only rarely noticed at parties and premieres.

But from time to time, Jemima posts pictures of Tyrian with her and her sons, and it is these pictures, and the touching words that accompany them, that tell their own story.

Alongside one of Jemima and Tyrian, posted in June last year, Jemima wrote: ‘Happy Birthday to this brilliant person, I’m lucky enough to call my stepdaughter.’ 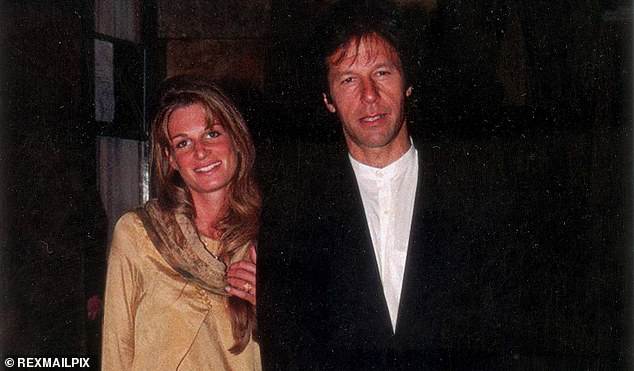 Jemima’s caption continued: ‘The best company — as illustrated in this photo — I’m pretty much always happy when she’s around. And tho’ I can’t take any credit, she’s one of the wisest, bravest, most authentic & impressive people I know.’

Later in the year, it was Tyrian whom Jemima took to the premiere of the film, Victoria & Abdul. Both dressed in black (see above), Tyrian smiled shyly as she posed alongside her stepmother.

The two could easily have passed for sisters, as Jemima is a youthful looking 44. In August, Jemima posted a picture of Sulaiman, Kasim and Tyrian, alongside the caption: ‘Vicariously holidaying with my gang.’

Sita White met Imran Khan at Tramp nightclub in the late Eighties. Back then, the former cricketer was one of London’s most successful playboys.

He apparently liked to refer to himself during this period as a tiger — and Tramp was his hunting ground.

Sita was the latest in a long line of women to fall at his feet. Tyrian was conceived at the end of a four-year on-off relationship and born in June 1992.

Imran refused, publicly at least, to acknowledge that the child was his. At the outset, her birth was a secret but her existence was revealed, with devastating timing, in May 1995, five days after Imran and Jemima were married in Paris.

Sita, it seemed, already stung by Imran’s apparent rejection of Tyrian, was further incensed by his marriage to Jemima.

After a judge ruled that Imran was Tyrian’s father in 1997, he met her in Los Angeles in 1998 amid high drama.

A few days before, Imran had agreed to make a speech to the Pakistani community at a Los Angeles hotel. As he was waiting, Sita slipped into the hotel and moved to his side.

Imran, clearly uncomfortable, was forced to talk to her. Days later, however, father and daughter finally met one another. There was a perception that there was hostility on the part of Sita towards Jemima, but the pair gradually formed a cordial relationship. Sita found Jemima kind and generous and Tyrian regularly spent holidays with Jemima. 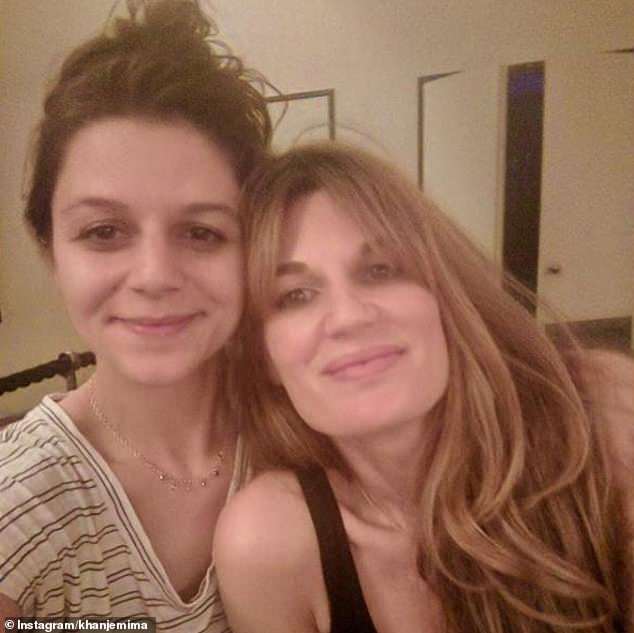 Despite Imran refusing to acknowledge that Tyrian was his until a judge ruled he was in 1997, she is still a part of his life through his link to his ex-wife. When she is in the UK she lives with Jemima at her home in Oxfordshire

At home in California, Tyrian was close to her mother. But Sita was troubled and had became embroiled in a battle over the fortune of her late father, the British industrialist Gordon White.

When, in early 2004, Sita learned she had cancer and was forced to think about who would take care of Tyrian, she thought of Jemima. As well as being a stable mother figure in her life, Tyrian would also continue to have, through Jemima, a connection with her father.

Sita rewrote her will, appointing Jemima as sole guardian and had Tyrian’s name changed to Tyrian Khan-White. Tragically, Sita collapsed and died of an embolism in May 2004 as she was getting ready for a yoga class in Santa Monica. Tyrian was not yet 12.

It was agreed that she should stay in California, where she had grown up. So she would live with her aunt, Carolina, Sita’s sister, and spend holidays with Jemima.

Tyrian lived with Carolina on her ranch in Paso Robles, a pretty coastal town in California, but today, Tyrian and her aunt have no contact. What happened to cause the rupture is not clear.

At 18, Tyrian moved to New York to study communications and media studies. And last year, she was working on Set It Up, a romantic comedy with Lucy Liu.

She no doubt talks about her work with her stepmother, who founded Instinct Productions and is executive producer of a new six-part documentary, The Impeachment Of Bill Clinton.

Earlier this month, Jemima and Tyrian went out with Sulaiman, 21, and Kasim, 19, and her brother Ben and his wife to a Bollywood themed party at Loulou’s in Mayfair. Jemima, in a dark-green Sherwani jacket, was photographed outside with a giggling Sulaiman and Tyrian behind her. She later posted the picture on Instagram with the words: ‘Always laughing behind my back.’

Indeed, Jemima has said, that she is always happy when Tyrian is around, and Jemima obviously makes Tyrian happy.

Sita White became convinced before her death that the best mother figure for her daughter would be the wife of the man who had scorned her and their daughter. Some may have doubted her wisdom at the time. But, as is so touchingly clear, she was absolutely right.