How is extreme cold good for health and beauty? 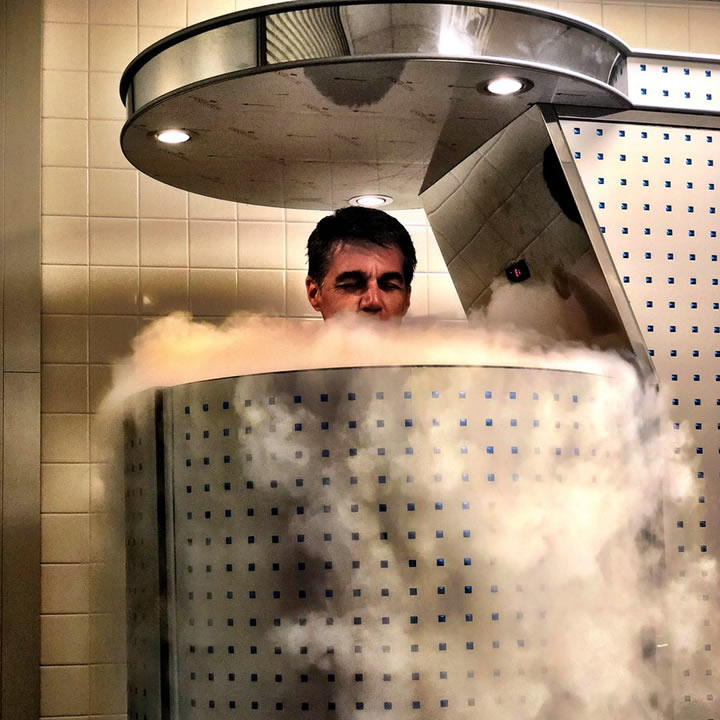 Body cryotherapy appeared in Japan in 1978 thanks to Dr. Yamaguchi, who observed the beneficial effects of cold in treating arthritis in his patients. The doctor found that low temperatures lead to the release of endorphins and pain relief. His research led to the emergence of cryo chambers where the temperature reached -120 °C degrees.

Later in Europe and the USSR, cryo chambers became popular with athletes for pain relief. This technology has been extensively researched and proven to be effective.

Scientists have found that stressful stimuli cause biochemical reactions in the human body, which, in turn, lead to the release of adrenaline and hormones. Their long-term effect on organs and systems has a negative impact.

With short exposure to extreme factors, there is a concentration of adaptive forces and resources hidden in the body. It is this kind of positive stress that is beneficial for the body that a person experiences in a cryo sauna.

The patient should be wearing a bathing suit, but to protect him from the possibility of frostbite, socks, gloves, and protection for the lips and ears are provided. The instantaneous sensation of skin cooling can last for 5 minutes, but the release of endorphins has a much longer-lasting effect, so possible body aches and symptoms of inflammation diagnosed in blood tests will disappear for many weeks.

It is impossible to freeze in a cryo sauna

At the same time, tissue freezing does not occur, since the session takes only 2 to 5 minutes. The internal organs at the same time maintain a normal temperature. The human body contains eight times more cold receptors than heat receptors. Therefore, low temperatures affect organs and systems much deeper and stronger.

In contrast to hardening, the body experiences a shock comparable to what happens during a contrast shower or dipping into an ice hole. The organism tries to survive in the created conditions with all its might, activating latent capabilities in response to an alarm signal coming to the brain from skin receptors.

At the same time, immunity is strengthened, endurance is increased, the whole body is rejuvenated, the metabolism also improves and accelerates. With the improvement of blood circulation during the procedures, the skin receives excellent nutrition and becomes elastic.

In aesthetic cosmetology, cryotherapy has long been used to reduce body fat and smooth out body contours. Cryosauna is one of the ways of body shaping because when exposed to low temperatures, the body experiences stress and starts metabolic processes. In addition, when it is cold, it takes significantly more energy to keep warm.

This also contributes to an increase in the number of calories spent. In addition, short-term exposure to cold reduces swelling and improves tone due to increased blood circulation and activation of metabolic processes in the deep layers of the dermis.

One of the technologies for the effect of local extreme cold on body parts is cryolipolysis, the effectiveness of which has already been proven by experts. This is a modern non-invasive method of influencing subcutaneous fat.

The selected area is captured using a special attachment (they vary in size depending on body parts – this can be a “double chin”, abdomen, thighs, patella folds, and not only), inside there are cooling elements that reduce the temperature to -5 °C.

In such conditions, fat cells are damaged, and then – within 2-3 months – their gradual (and therefore safe for the body) splitting occurs. During this time, the client needs to follow a diet, exercise, and drink plenty of water (it will help remove decay products).

Cryotherapy can also be used for the face

A type of cryotherapy is cryo massage. It relieves muscle tension, swelling and smoothes the skin. During this massage, a large cotton swab with liquid nitrogen is used, which is “rolled” over the skin for about 2-3 minutes of each zone.

The effect is achieved due to the fact that at first, the vessels narrow from the cold, and then, after the procedure, “open”, which improves blood circulation. Regeneration is accelerated, and minor injuries heal faster.

Although this is a “cold” procedure, it is still comfortable – there are no unpleasant sensations, except that after leaving, dryness and slight peeling may appear, but this can be easily eliminated with ordinary daily moisturizing.

This can also be done on the scalp to relieve tension, stimulate hair growth – again by improving microcirculation – and eliminate itching.

During cryotherapy, the body experiences a very strong shock. With such an action, we stimulate not only active intracellular processes, but can also influence the bacterial flora. That is why, for some inflammatory processes of the skin, this procedure is very useful.

After a cryo sauna, you can catch a cold

Although the effect of cold on the body is controlled, it is possible to catch a cold after a cryo sauna, although this happens extremely rarely. This is only possible if initially, your body is in a borderline state and immunity is very seriously reduced. Therefore, before visiting such procedures, you need to consult with a specialist.

Cryotherapy is not allowed for people with closely spaced vessels

If you have close vessels, there are signs of rosacea or rosacea, then such procedures are contraindicated for you since the effect of such an effect on your skin type will be more negative.

When exposed to cold of such a force, vasospasm first occurs, the consequence of which is their expansion, which will lead to a strong load on the damaged structure of the vascular tissue.

Cryotherapy should only be performed under the supervision of a physician

Such procedures are classified as physiotherapy, therefore, they should be carried out with the permission of a specialist. Cryotherapy can not only reduce unwanted pain and nerve irritation but also lead to tissue numbness and tingling.

Cryotherapy can also cause redness and irritation of the skin. But these effects are usually temporary. That is why all procedures should only be carried out under the strict supervision of trained professionals. Perhaps because of these unusual sensations, people are wary of cryotherapy.

How much does a cryotherapy machine cost?

The price of a cryotherapy machine for sale depends on each manufacturer. Cryo chamber units can be personalized and installed anywhere: in a private home, in a sports center, in a SPA, etc.