How James Norton overcame bullying as a deeply religious teen

He rose to fame as the evil villain in Happy Valley and is even rumoured to become the next James Bond.

James Norton, 37, is known as a heartthrob from the big and small screen and now he is set to take on the lead role of Jude, in the West End production of A Little Life-which has been adapted from Hanya Yanagihara’s 2015 novel.

After starring in his first role as a classmate of Jenn in the film as An Education starring Carey Mulligan, in 2009 he went onto star in numerous theatre productions, smaller TV productions and eventually Norton was acclaimed for his role as Tommy Lee Royce in Happy Valley.

Since then, the Peckham-based star has also has success in Hollywood, and starred in the 2019 adaptation of Little Women.

James Norton, 37, is known as a heartthrob from the big and small screen rose to fame as the evil villain in Happy Valley 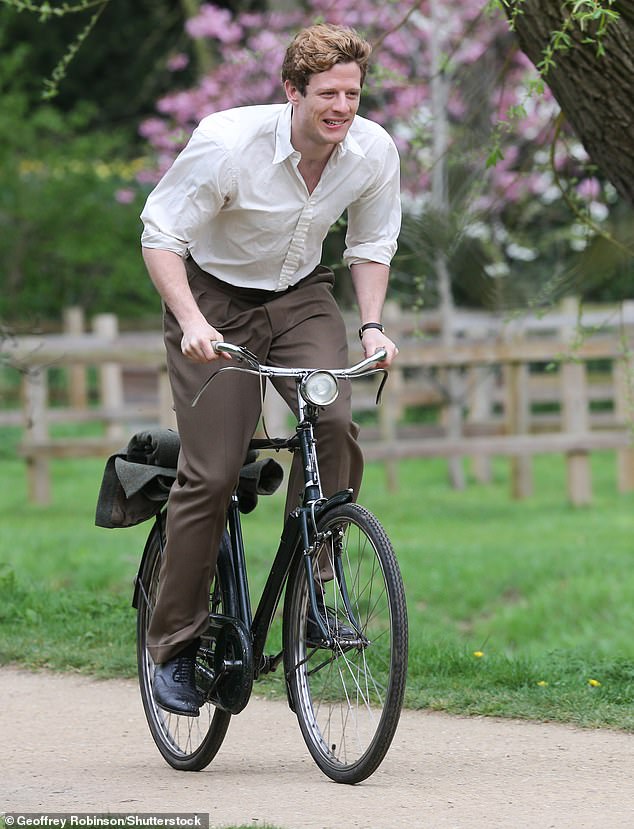 Born in London to teacher parents Lavinia Jane and Hugh Biddulph Norton, James grew up in North Yorkshire where he was severely bullied at his £36,000-a-year Catholic boarding school Ampleforth College.

The school was previously banned from taking new pupils after a child sex abuse scandal, when the Independent Inquiry into Child Sexual Abuse to have covered up decades of claims to safeguard the church’s reputation.

Although he’s stressed that he was never sexually abused, Norton previously revealed he was so badly bullied at school that he’s having therapy 20 years later.

The actor admitted ‘it’s only now’ that he’s ‘recognising the effect’ of his troubled past and ‘what it’s done to him’.

‘I had quite a grim time,’ he told the Daily Mail’s Eden Confidential. ‘It’s only now, in my later life as an adult, that I’m recognising that effect and what it has done to me.’ 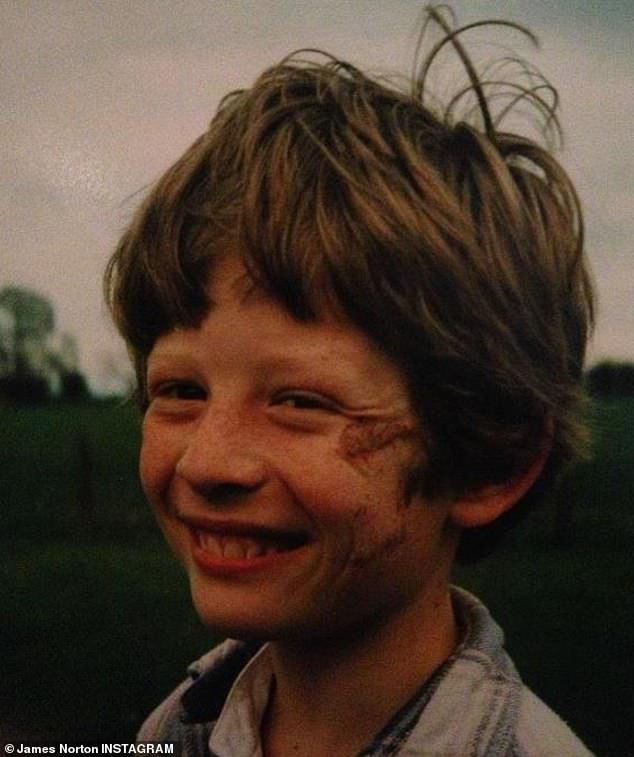 Born in London to teacher parents, James grew up in North Yorkshire where he was severely bullied at school 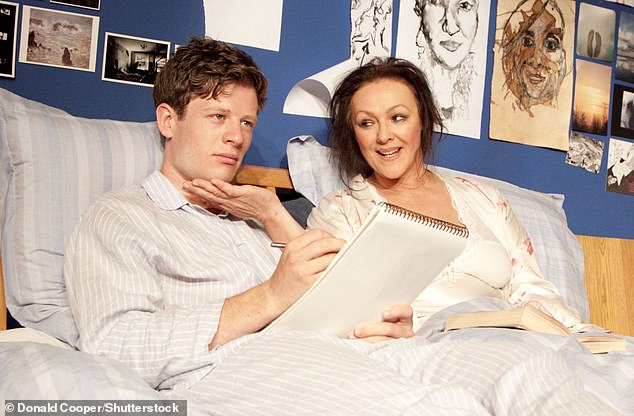 James played Henry, next to Frances Barber who played Martha in the theatre production That Face at the Crucible Studio Theatre in Sheffield in 2010

Speaking on the Comfort Eating podcast, he said: ‘My school years were complicated. I didn’t have the greatest time.

‘I was quite badly bullied for five years and I was at boarding school so I couldn’t leave. I’ve had a great therapist for the last four years, and it’s not from a place of drama.

‘And I’m luckily not suffering from depression or anything like that but it’s been really, really helpful to understanding what [happened to me at school].’

James added that he is not a fan of the boarding school system and thinks most of the kids there are ‘deeply homesick’.

He said: ‘I’ve realised that boarding schools are really weird places. We’re the only country that still sends our kids away voluntarily.

‘You’re stuck with these people, and all these young kids are just deeply, deeply homesick and they’re just lost.

‘For some of them, that pain manifests itself in being needy or rebellious. But some of them get angry and rather than crying out for their mum they just bully someone.’

However, he has praised the ‘enormous amount of support and solace’ he received ‘from a couple of the monks’ when he was being bullied, and said that as a deeply religious teenager, he was grateful for the chance to ‘sit and contemplate, and pray’. three times a day.

‘It wasn’t therapy, but it was a moment of pause and meditation, in this incredibly lush valley,’ he told The Guardian.

After leaving school, he began studying theology at University of Cambridge, even though he’d lost, or rather ‘changed’ his faith in organised religion by that point.

‘There are moments when I’m at my most extreme, with pain or trauma or joy – then maybe you’re crying out for any guidance or wisdom,’ he said.

It was there he began starring in theatre productions, landing his first film role opposite Carey Mulligan in 2009 in An Education.

From there, he appeared in a number of small film and TV roles, including Doctor Who, in which he played a crewman on a Soviet submarine during the Cold War.

He also starred in the ITV drama Grantchester before landing his break-out part in Happy Valley.

Norton was acclaimed for his role as Tommy Lee Royce, the villain of the hit crime, which was quickly renewed for a second season. 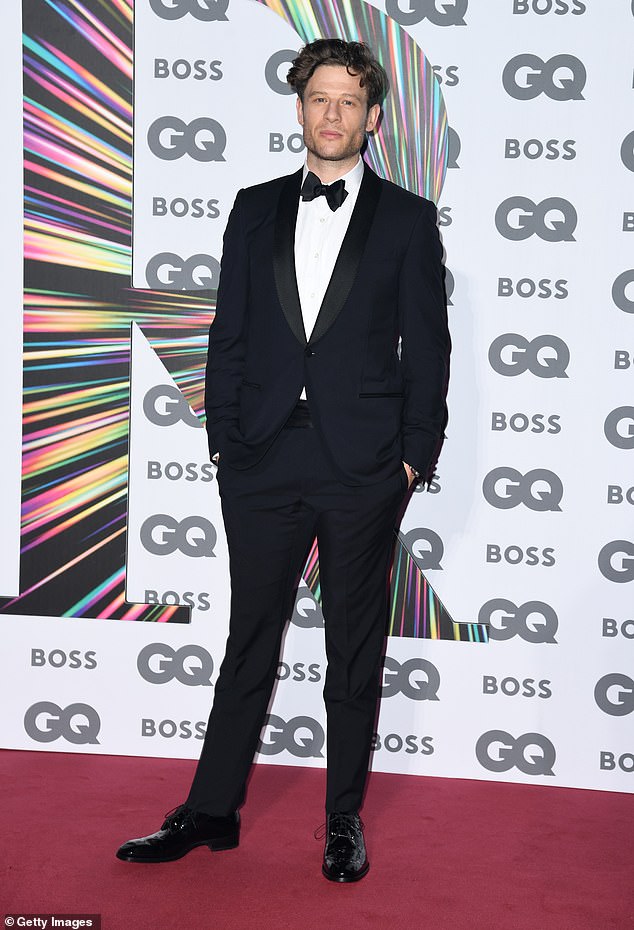 Tommy was a sadistic character who was introduced to audiences as the man who raped Catherine’s daughter Becky in such a traumatic attack, she later took her own life.

With bleached blond highlights and a perfect thick Yorkshire accent, Norton played the part so well he terrified audiences up and down the country.

Viewers were on the edge of their seats as Tommy-Lee Royce came back into Catherine’s life to try and claim his son Ryan (a product of the rape).

In a parallel storyline, Royce also became one of Ann Gallagher’s captors in the first series of the show – and proved himself to be the most evil of the three men as he assaulted the millionaire’s daughter too while she was held to ransom.

Norton’s phenomenally convincing performance of the psychopathic criminal earned him acclaim from critics across the board – as well as nasty messages from members of the public.

In 2017 the London-based actor revealed he received death threats for his role in Happy Valley, so frightened were some viewers by his portrayal.

James previously said of reprising his role as Tommy: ‘To take on Tommy one final time is a wonderful and daunting privilege, and something I’ve been looking forward to since we wrapped the last series, six years ago.’

Speaking to The Times the actor revealed that while playing the antagonist in storylines would get ‘inevitably uncomfortable’. 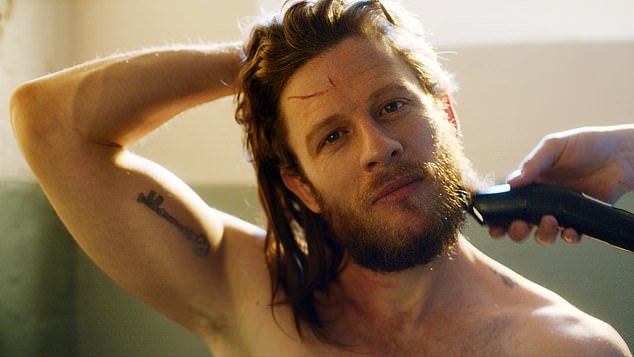 Norton was acclaimed for his role as Tommy Lee Royce, the villain of the hit crime drama Happy Valley, which was quickly renewed for a second season

‘But not everybody goes off set to their trailer to cry,’ he continued. ‘I love my job, but, ultimately, acting is pretending.’

James added that he likes to have a beer and a bath at the end of the day to ‘decompress’, and didn’t leave set thinking that he ‘can’t get Tommy out of his head’.

Happy Valley was a big hit with audiences after first airing in 2014, winning a BAFTA Award for Best Drama Series, with a follow-up second series in 2016.

He later appeared as Prince Andrei Bolkonsky in the BBC miniseries of Andrew Davies’ production of War & Peace.

After the first series of the show aired in 2014, Norton took on starring roles in ITV’s Grantchester, in which he played reverend and amateur detective Sidney Chambers, before moving on to greener pastures in BBC drama McMafia.

The Russian gangster thriller required the actor to speak and act in Russian as the character of Alex Godman, who is of Russian descent.

Although McMafia was axed after its first series, it was a huge hit with viewers and cemented Norton as a household name – which led to talk of him assuming the role of James Bond. 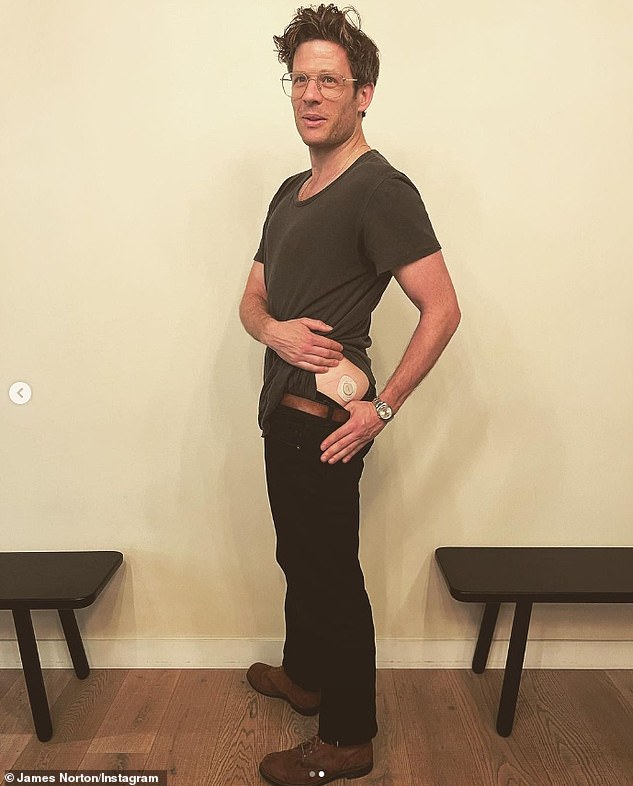 Meanwhile he has also previously spoken about having Type 1 diabetes, previously calling his condition like having ‘a really annoying’ friend 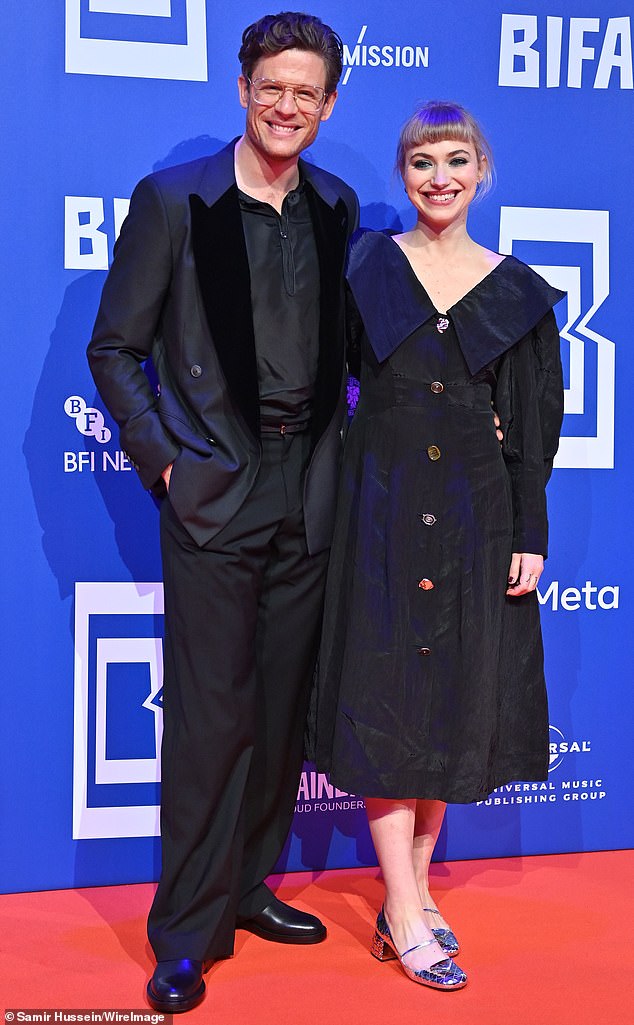 James proposed to actress Imogen Poots, 32, after four years of dating, with the couple ‘over the moon’ as they prepare to wed (Pictured in December)

Back in 2017 Norton rubbished the rumours as ‘mad’ – but now Daniel Craig has officially bowed out of the role, the chatter has re-emerged.

The War & Peace star has been long reported to be Daniel’s successor following his outing as the spy in No Time To Die, with bookmaker Ladbrokes even temporarily suspending betting on the character.

Amid frenzied speculation about who will be the next to play Bond, with stars including Richard Madden and Idris Elba being linked with the role, a source previously told The Sun in July that both sides were trying ‘to get a deal signed off’.

They said: ‘Producers wanted a Brit and James ticks all the boxes – tall, strapping, physically fit and, of course, looks great in a dinner jacket.

‘Everyone is hoping to get the deal confirmed and signed off, with an announcement in the summer.’

However, he can count on family to keep his feet firmly planted on the ground.

His great-aunt Daphne in particular has done her bit to bring him down to heart.

‘She said to me: “I don’t get it, you’re much better looking on film than you are in real life”,’ he revealed.

Meanwhile he is not just a heartthrob on screen but also off as he got engaged to his long term girlfriend Imogen Poots in February last year, after four years of dating, with the couple ‘over the moon’ as they prepare to wed.

The pair confirmed their romance in December 2017, after appearing alongside each other in the West End production of Belleville at the Donmar Warehouse that summer.

An insider told Eden Confidential’s Stephanie Takyi of their happy news: ‘They’re over the moon about their engagement and have only told close friends and family. 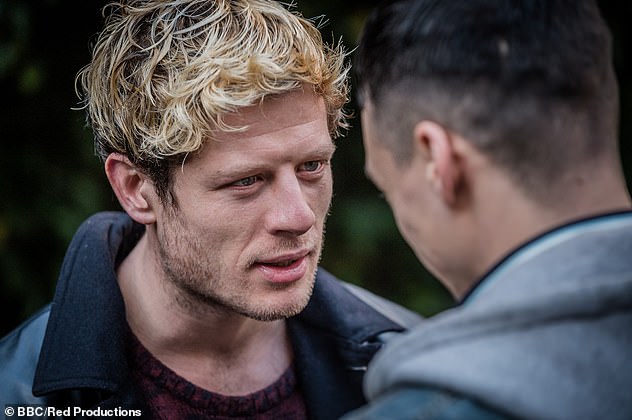 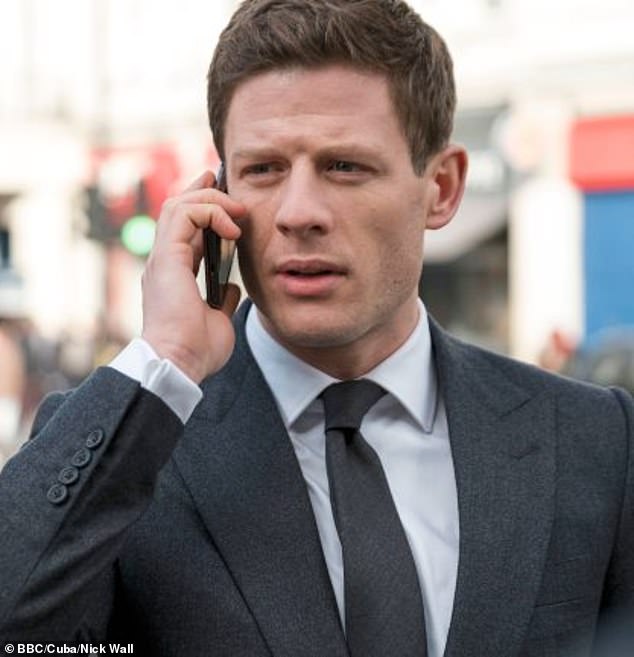 James starred in high-budget BBC drama McMafia in 2017 (pictured), for which he had to learn lines in Russian

What is Type 1 Diabetes?

Type 1 diabetes causes the level of glucose (sugar) in your blood to become too high.

It happens when your body cannot produce enough of a hormone called insulin, which controls blood glucose.

You need daily injections of insulin to keep your blood glucose levels under control.

Managing type 1 diabetes can take time to get used to, but you can still do all the things you enjoy. This guide is here to help.

Type 1 diabetes is not linked with age or being overweight – these things are linked with type 2 diabetes.

‘Imogen was totally surprised and is looking forward to being Mrs Norton.’

James and Imogen initially had a long distance relationship (between New York and London), which she previously opened up on during an interview with The Evening Standard.

She said: ‘It’s all I’ve ever known. I’ve never known something to fall apart because of distance.’

‘Sharing a bathroom, however, is quite another matter,’ she added.

But in 2020, Imogen – who starred in The Father with Anthony Hopkins – moved into James’s London pad in Peckham, and the couple are often seen cycling around the district.

He has also previously spoken about having Type 1 diabetes.

Alongside a shirtless picture of himself on the beach in Kent in which he showed off his Dexcom device the Grantchester star wrote that the condition was like having a ‘really annoying friend.’

He penned in the caption: ‘November is Diabetes Awareness Month, so this is a proud shoutout from a chilly beach in Kent, to all my fellow type 1 warriors out there. Being a type 1 diabetic is like having a really annoying friend.’

He went on: ‘It requires constant care and attention as well as patience and fortitude, but occasionally can be a strange sort of support, and even a power…

‘It helps you to be more empathetic. It encourages you to look after yourself and your health, as well as other people around you.’

‘I’ve strived to make sure that it hasn’t limited me, although I think it’s probably made me more conscious of my own health and that wasn’t the worst thing in my mid-20s,’ he told Square Mile. ‘I probably had a little moment where I went, ‘Actually, you know, you are fallible and mortal and everything else.’