It seemed that they would be one showbiz couple that would go the distance.

But on Friday, Louise and Jamie Redknapp were awarded a decree nisi at London’s Central Family Court – in a hearing that is said to have lasted a mere 25 seconds.

Having met in 1995, the couple were together for the better part of 20 years, marrying in 1998 and remaining a seemingly solid coupling until cracks began to show at the start of 2017.

Far from Eternal! How Jamie and Louise Redknapp’s two decades together crumbled from a 90s showbiz fairy tale to a quickie 25-second divorce (pictured last February)

And after rumblings that 43-year-old pop star-turned-WAG Louise’s stint on Strictly Come Dancing had led to issues at home, things seemed to go from bad to worse as the year progressed.

Mere days before the year’s end, their marriage has been declared over, with Louise filing for divorce earlier in the year, and 44-year-old Jamie’s ‘unreasonable behaviour’ being cited as the reason for their split.

The couple were first introduced when Louise’s band, Eternal, were on tour with Take That. 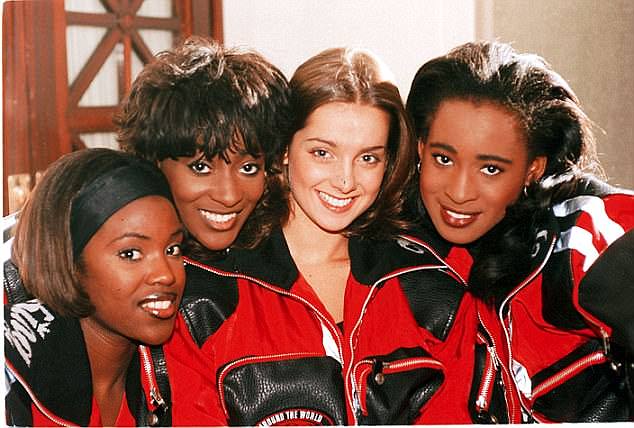 Back in the day: Louise was the better-known out of her and Jamie, being one-fourth of the chart topping band Eternal (which also consisted of Easther and Vernie Bennett and Kéllé Bryan)

Newlyweds: The couple married within a week of Jamie proposing in 1998 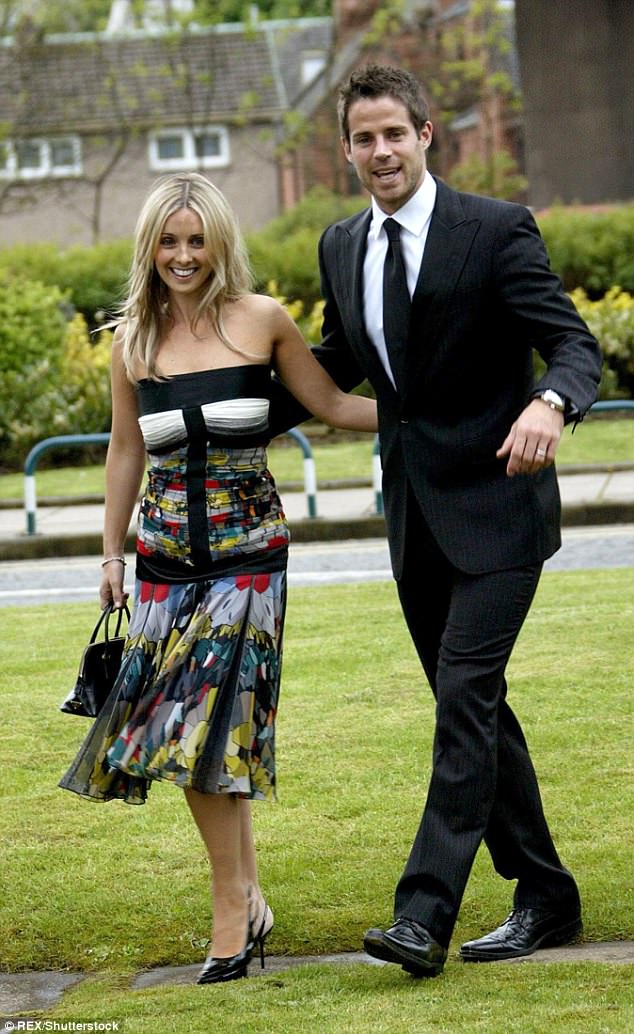 Early days: Louise and Jamie are pictured at the Hilton Hotel in Glasgow for a charity benefit dinner to celebrate ex-Scotland rugby union international Kenny Logan’s career on May 19 2005 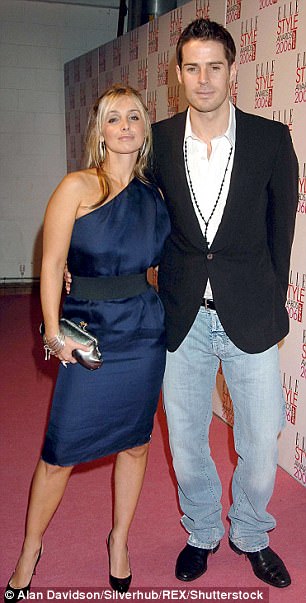 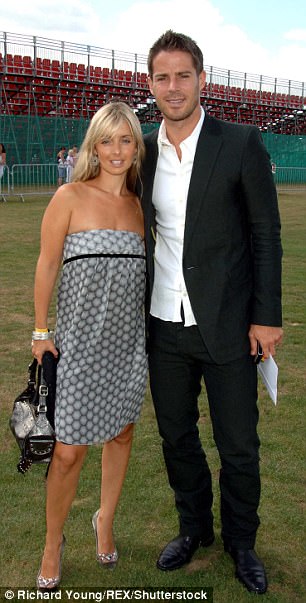 Mutual friends: Robbie Williams set them up, with Louise allegedly insisting that they take things slow at the time (pictured 2006)

Robbie Williams set them up, with Louise allegedly insisting that they take things slow at the time.

She was the better-known of the two, being one-fourth of the chart topping band [which also consisted of Easther and Vernie Bennett and Kéllé Bryan].

Jamie played football for Liverpool FC, with Louise recalling in an early interview: ‘He was a young, good-looking footballer. I wasn’t stupid and that’s most probably why I didn’t go out with him for so long.’

At the end of 1995, Louise left Eternal [whose success saw them sell 10 million records worldwide] so she could release a solo album. She was known artistically as just ‘Louise’. 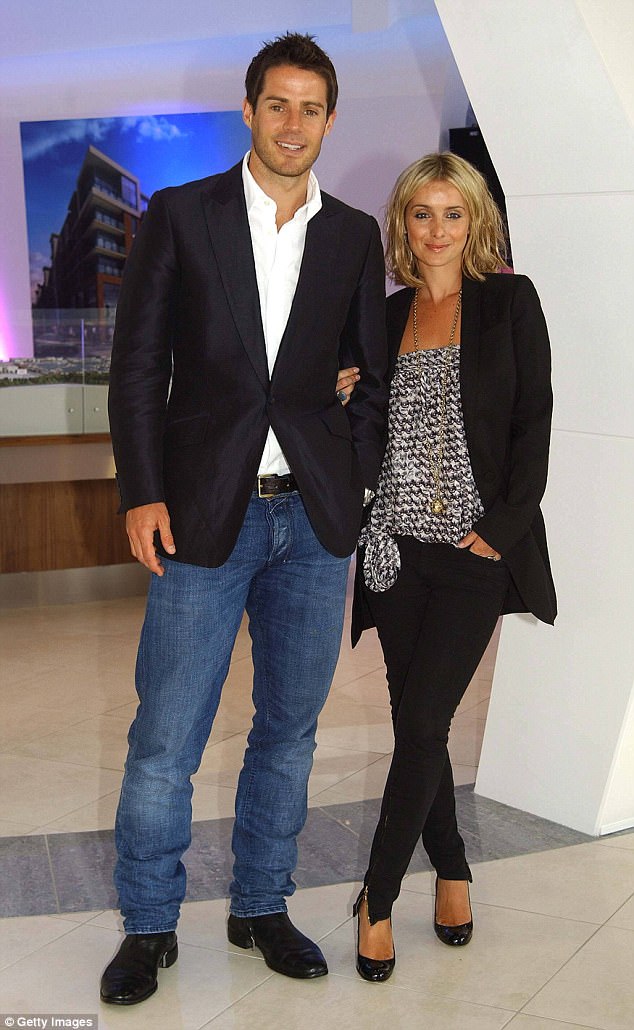 Jamie played football for Liverpool FC, with Louise recalling in an early interview: ‘He was a young, good-looking footballer. I wasn’t stupid and that’s most probably why I didn’t go out with him for so long’ (pictured in 2007) 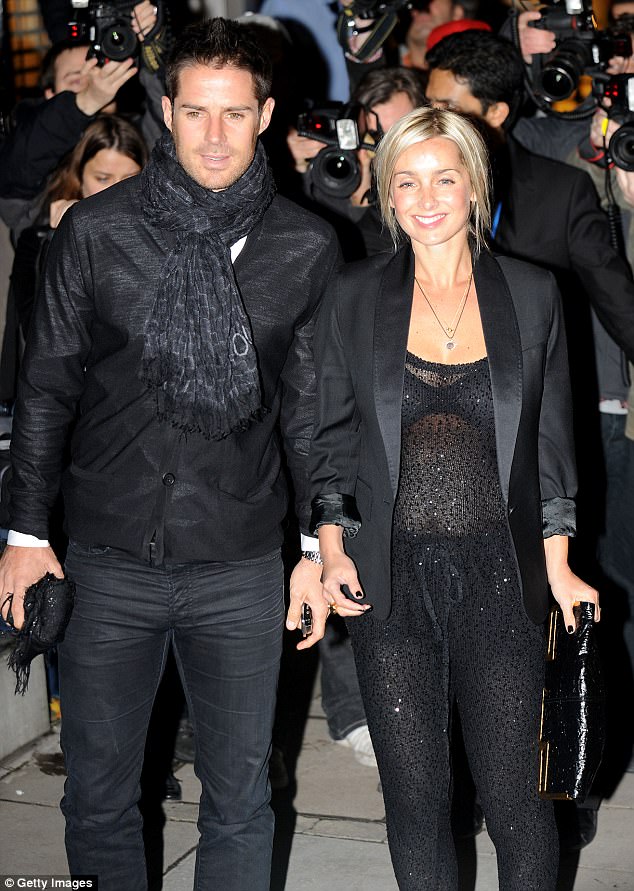 Way back when: In October, Louise revealed she ‘lost herself’ during her marriage to the former footballer, while hinting at feelings of hurt and insecurity in the wake of the split (pictured together in 2009)

During this time, she and Jamie became romantically involve and didn’t mess around: while on vacation in Bermuda in 1998 Jamie proposed.

Within the week, they had gotten married on the beach – tying the knot on June 29. It’s said they didn’t want the hoopla of other glitzy showbiz weddings.

Unlike many a pop star/footballer union, the couple seemed to keep a clean slate. While the likes of Cheryl and Ashley Cole and Wayne and Coleen Rooney have been plagued with cheating rumours, Jamie and Louise’s track records has been un-blotted.

Louise scaled back from work, concentrating on her family, while Jamie continued to play football.

She said of this time: ‘Every mum knows there is no better job in the world than having a family but you do lose a sense of you, and I definitely lost a sense of myself.

‘The foundations of my life, they’re solid. It’s what will always be there. But it is hard when you’re married to someone with a very successful career, and you have children, to have everything.

‘Something has to give somewhere and I think it was me that gave. Having a successful husband is great in some ways but it is also a reminder of you not being successful.’

Just two years ago, Louise expressed she and Jamie could have a third child, but this didn’t come to fruition.

Doting mum: Louise scaled back from work, concentrating on her family, while Jamie continued to play football 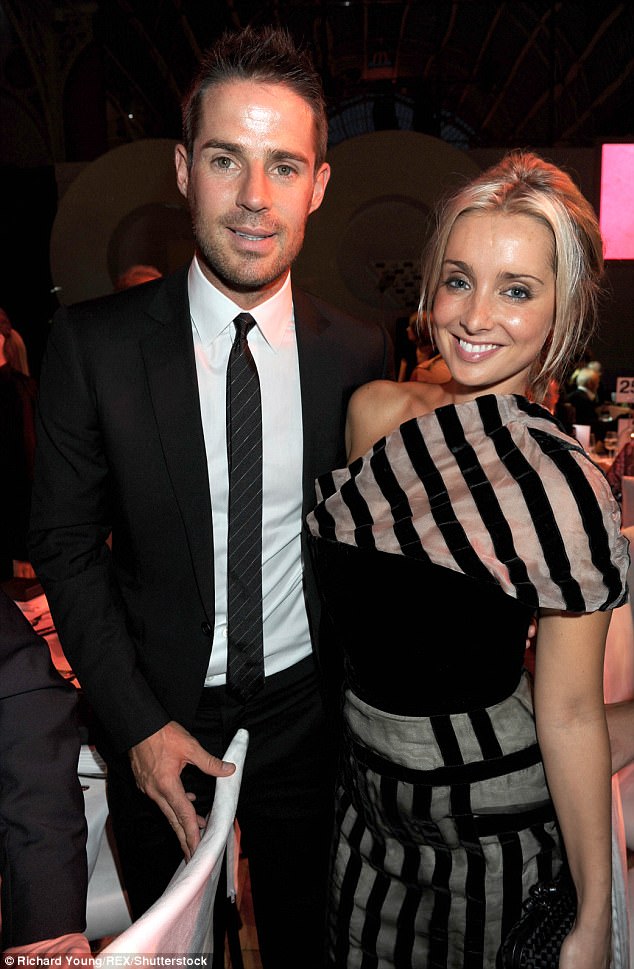 Going strong: Jamie and Louise were still going strong when pictred at the GQ Men of the Year Awards in September 2009

‘I would be lying if I said I didn’t have those days where I think it would be nice. It’s hard to rule it out when you reach an age when you know you have to make a decision,’ she said.

‘I am on a short time span. I need to do it quickly if I’m going to do it. I’m fully aware that I don’t have years to wait. I know how close I am to my mum. I’ll always be close to my boys but it’s a boys’ club and I can feel a bit left out.’

She went on to admit: ‘I don’t know a married couple who don’t argue. I love a good shout and scream every now and again.’

She was sure to add: ‘We always want to talk it through. That is why we have been married for so long. He’s my husband and my mate.’

With her boys growing up, and Louise only taking on the occasional project. She fronted The Clothes Show in 2006 and went on to make controversial documentary The Truth About Size Zero for ITV in 2007.

This was followed up with 2009’s The Truth About Super Skinny Pregnancies, which looked at how woman are pressured to stay in shape during and after their pregnancies.

In September 2009 she presented The Farmer Wants A Wife for Channel 5, and in January 2010 she took over from Amanda Hamilton as the full-time presenter of BBC Sunday morning programme Something For The Weekend.

The show moved to Channel 4 in 2012, but Louise was not taken across with it.

She was a judge on the UK version of So You Think You Can Dance, broadcast on BBC One, and then joined the 14th season of Strictly Come Dancing in 2016 – where she was partnered with pro Kevin Clifton.

She reached the final where she finished as a joint runner-up with Danny Mac and behind winner Ore Oduba, with Jamie often seen in the audience and Louise remarking that they would not fall foul to the ‘Strictly Curse’. 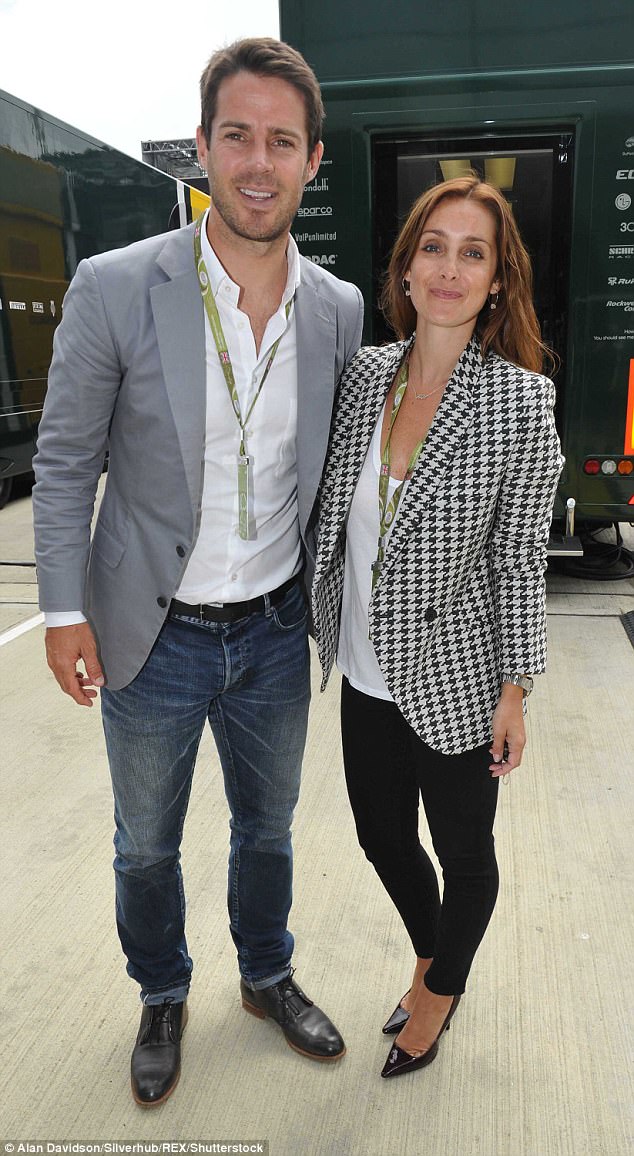 Sticking together: The pair are one of the few WAG/footballer couples to not be plagued by scandalous claims 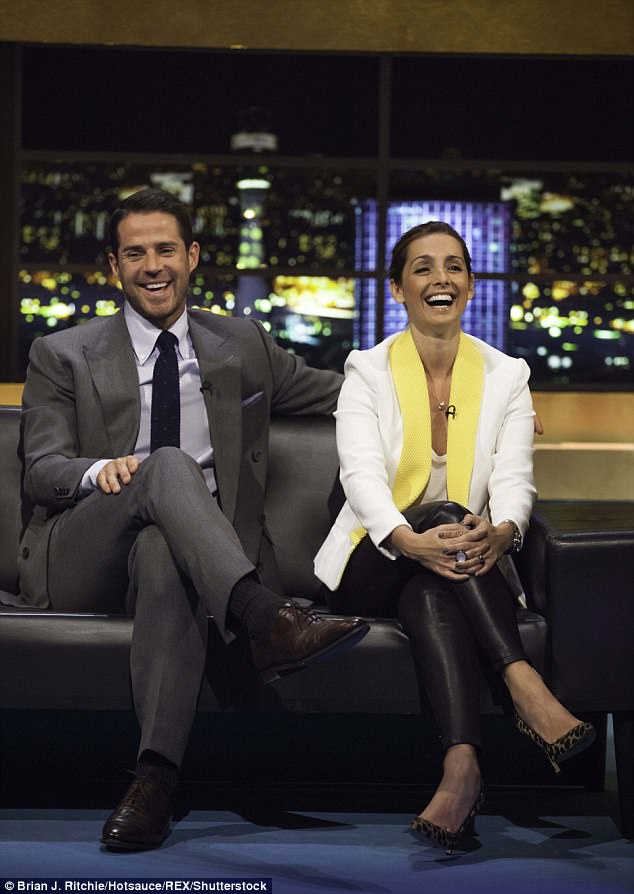 High profile: The Redknapps appeared on Jonathan Ross’ show in 2013

She was hit by claims that she was getting too close to her partner Kevin, whose marriage to fellow dancer Karen Clifton also appears to now be in trouble.

There have been reports that Karen, who is reportedly dating a new man, telephoned Jamie to warn the former footballer of Louise’s close friendship with her husband.

Her Strictly co-star Daisy Lowe was accused by some commentators of ‘leading her astray’ with her wild partying and active social life as well.

Louise admitted the couple were going through ‘hard times’ in September, and in October she admitted to living apart from her husband.

Louise is relaunching her pop career and is touring for the first time in 15 years – with Kevin recently seen supporting her at one of her gigs.

The decree nisi for L E Redknapp v J F Redknapp was pronounced before a judge on Friday. 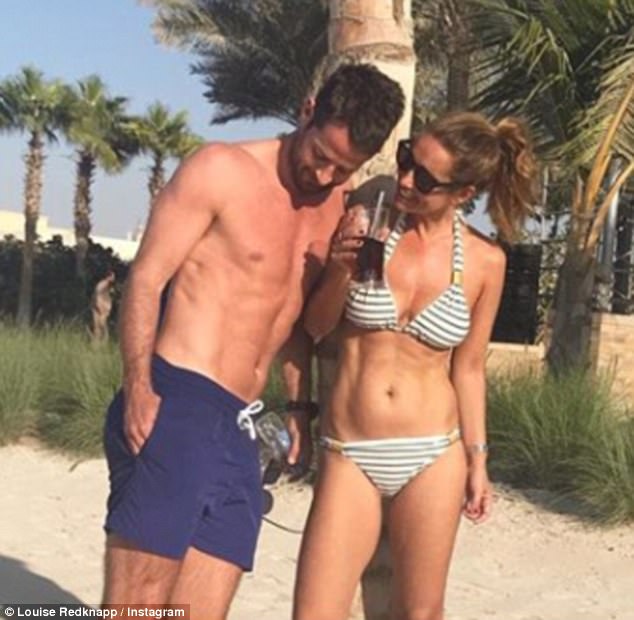 It’s over! The couple confirmed their separation in October and their marriage could not be saved (pictured together on holiday in January this year) 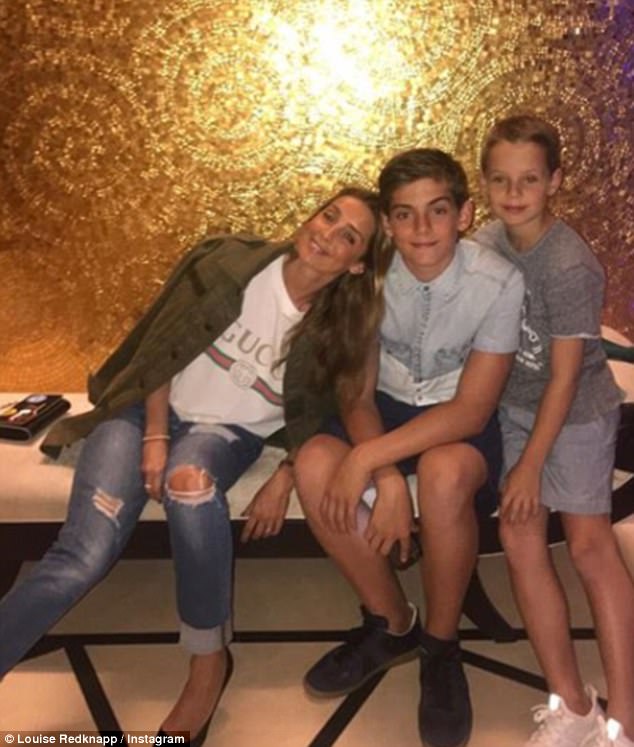 Still loving parents: The couple are said to be remaining amicable for sons Charley, 13, and Beau, nine, pictured with their mum

A decree absolute ending the marriage can be issued after six weeks, should no objections be formally made.

The divorce came amid claims the former England star was ‘uncomfortable’ with his wife’s return to the spotlight after her stint on Strictly last year. Jamie, however, denied these claims.

She was said to have felt like a ‘Stepford wife’, having given up her showbiz career when they had their first child.

Sources told The Sun earlier this month: ‘They have come to a mutual agreement that divorce is the only option. There’s no going back’.

Happier times: Louise insisted that neither she nor Jamie (pictured last October) were  pushing for a divorce but added that she ‘needed’ to be apart from him while she re-evaluates her life

BFFs: Louise said new friend Daisy Lowe convinced her she was still sexy, encouraging her to show off her ‘gorgeous body’ on the show, when she believed she needed to lose weight

The former Liverpool player was seen without his wedding ring days before his wife reportedly filed for divorce, and revealed he would spend the Christmas period working.

Louise said it was dancing in the BBC show that made her realise she ‘couldn’t go back’, adding ‘I became a sort of Stepford Wife, wanting to be perfect at it.’

‘It was only when I agreed to do Strictly Come Dancing that I realised I couldn’ t just go back to that. I didn’t want to continue running around after everyone else, and occasionally promoting a yoghurt or doing a little TV presenting job.’ 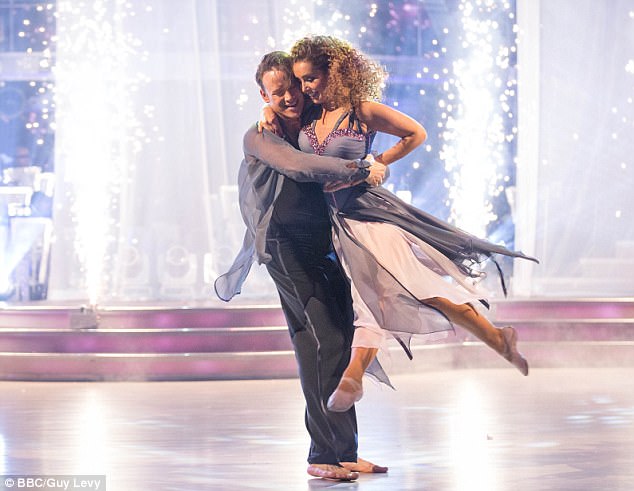 Former dancers: Louise stepped back into the spotlight on last year’s Strictly Come Dancing – but there have been claims that she was getting too close to her partner Kevin Clifton 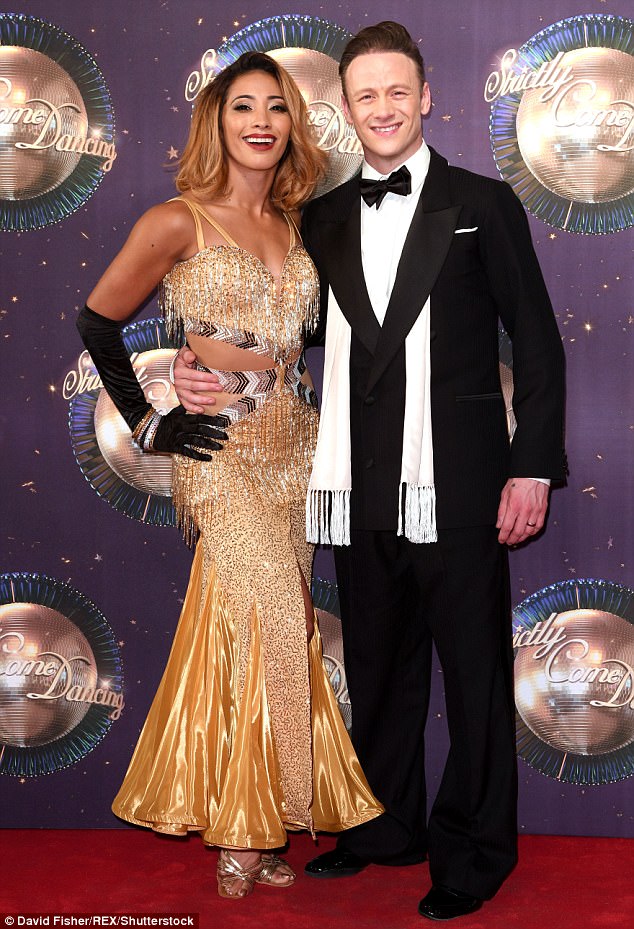 Marital woes: Karen Clifton, who is married to Kevin but reportedly dating a new man, telephoned Jamie to warn the former footballer of Louise’s close friendship with her husband

The former Eternal singer, who was a runner-up in last year’s series with professional partner Kevin, said she felt ‘physically sick’ at the prospect of never performing again.

She said: ‘I wanted to sing. I wanted to perform. I wanted to go back to work on a stage in front of an audience. I actually felt physically sick at the idea I’d never have that buzz again, that fulfilment I get from performing. And that is when the s*** hit the fan.’

Jamie and Louise will now reportedly work out the custody of their two sons, Charley, 13, and nine-year-old Beau.