Kendall and Kylie Jenner both have an incredible talent for making baggy sweats and and tees look stylish — and it turns out their trick to avoiding looking frumpy is a figure-flattering pose.

Long before 20-year-old Kyle was reportedly wearing oversize shirts to hide a baby bump, she and her 21-year-old sister have been rocking extra large T-shirts and sweatshirts that would look downright sloppy on anyone else.

However, Kelsey Stiegman, a style editor for Seventeen.com, has pointed out that two sisters are constantly using their arms to lift up one side of their baggy tops to show off their hips.

Patented move: Kendall and Kylie Jenner rely on a strategic pose to make their baggy tops look flattering. Kylie, 20, is pictured in March 2016 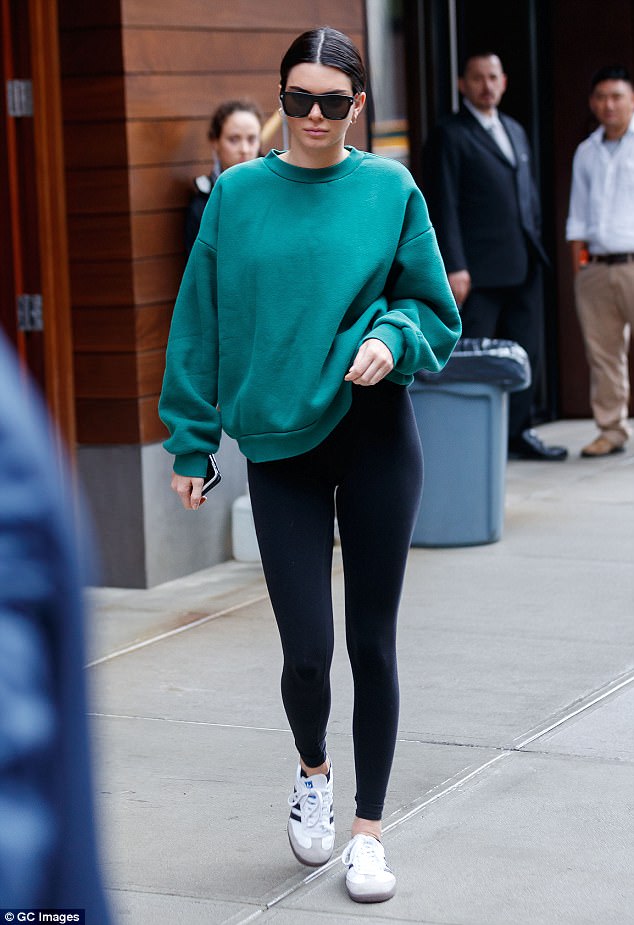 Genius: When they are photographed wearing oversize sweats, the Jenner sisters use one arm to pull up their shirts to show off their hips. Kendall, 21, is pictured in New York City this week

‘They’re probably the only two people on earth who don’t look frumpy while wearing XXL tees and that’s because of this one weird pose,’ she explains.

As she made her way through the city streets, the model had her left arm bent and raised so her sweatshirt was riding up the side of her hip.

Works like a charm: Kendall pulled the move while wearing an extra large T-shirt in February (L) and heading to her sister Kim Kardashian’s birthday dinner on Thursday (R) 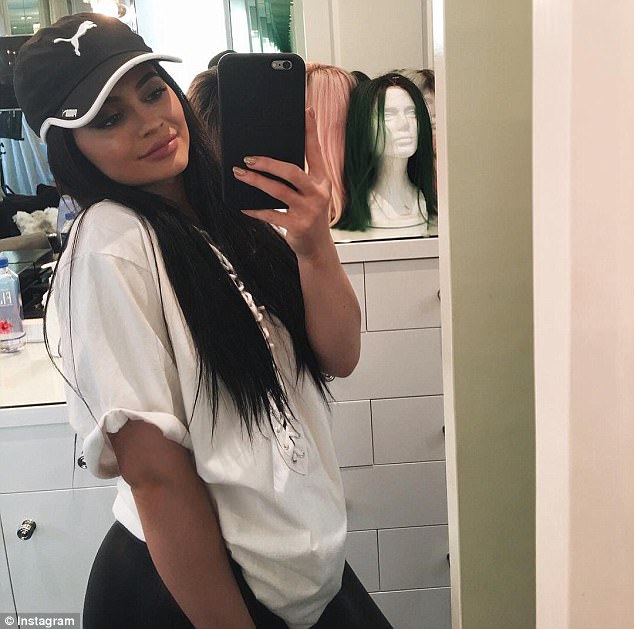 Start of it all? Kylie has been working the pose for over a year now. She is pictured in April 2016 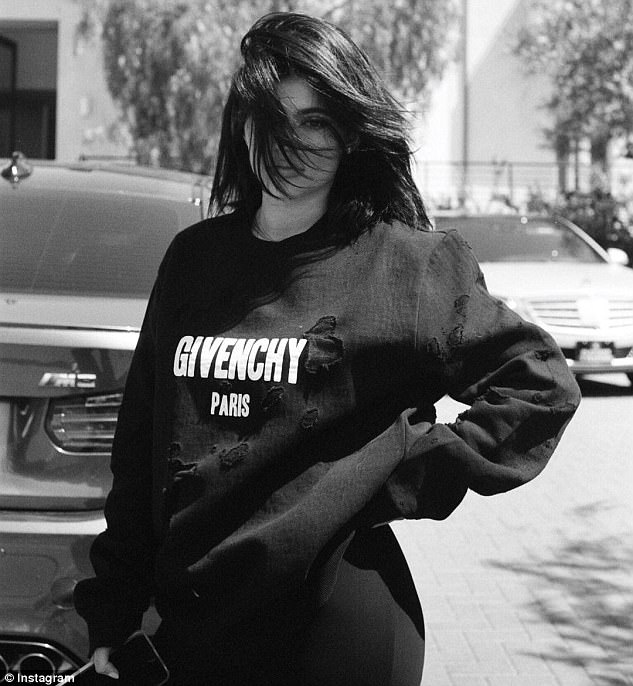 Sister, sister: Kendall took this photo of Kylie in a baggy sweatshirt in May 2016

The reality star made the casual outfit look so good, it inspired Cosmopolitan.com writer Lauren Adhav to pen an entire article about it, titled: ‘Why Does Kendall Jenner Look so Chic in an Oversize Sweatshirt and Leggings When I Don’t?’

The runway star was wearing a baggy white T-shirt featuring the word ‘Techno’ in hot pink splashed across the front, frayed jeans, and white pointed-toe mules. 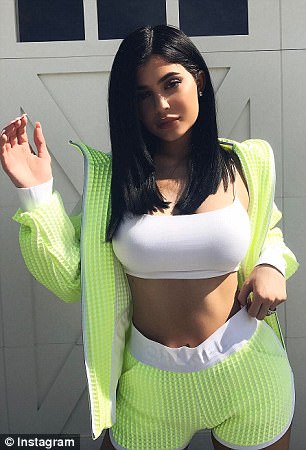 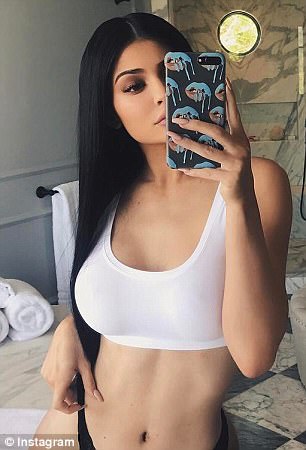 She just loves it! The younger Jenner sister also likes to lift of the band of her bottoms when she is showing off her hourglass shape 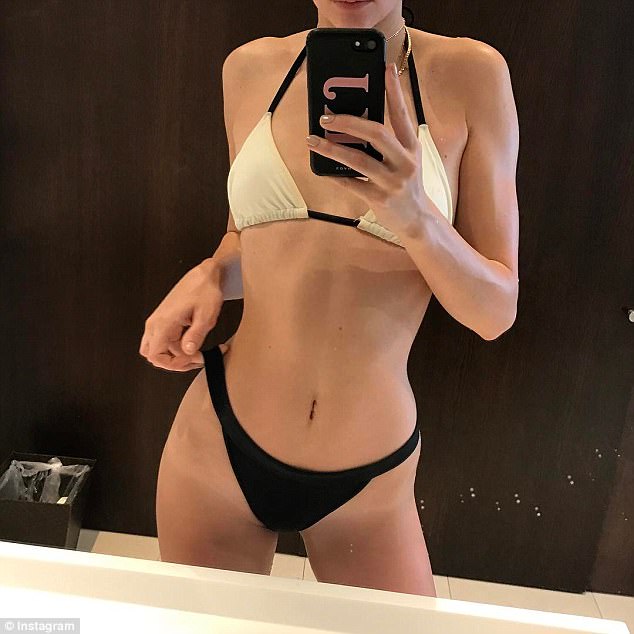 Model move: Kendall used her hand to lift up the band of her bikini bottoms back in January, once again employing a trick that her sister had originally used

Just like the other day, Kendall had her left arm bent while she lifted up the side of her tee.

Kendall may have stolen the move from her sister, who struck the exact pose in multiple selfies that she took in the spring of 2016.

One picture sees her popping her hip and lifting up the side of her oversize tee while taking a photo of herself.

In May 2016, Kendall snapped a photo of her younger sister modeling a Givenchy sweatshirt with hand on her hip so the top was riding up. 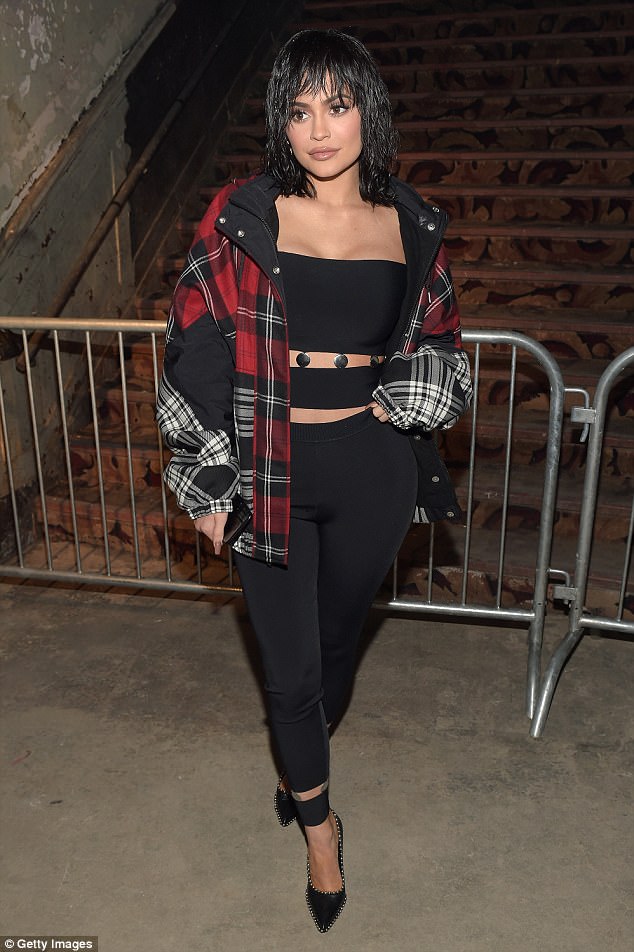 Showing off her outfit: Kylie relied on the pose when she being photographed at the Alexander Wang show in February 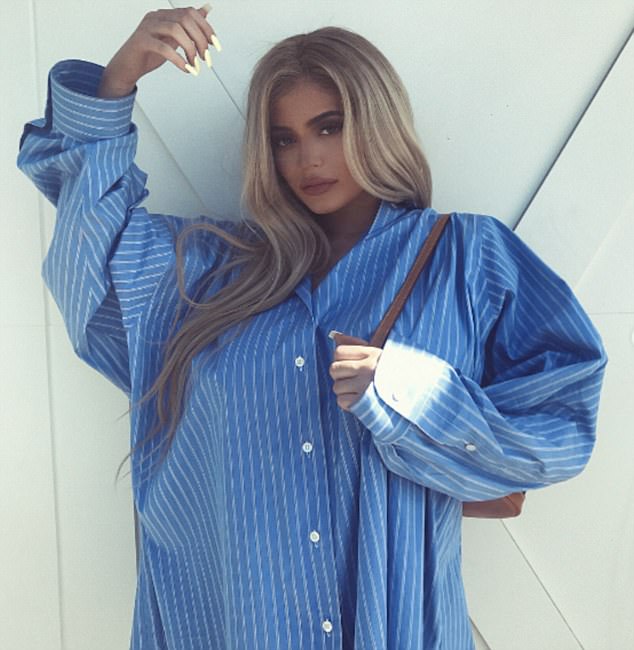 Taking a break? Kylie, who is reportedly pregnant with her first child, avoided lifting up her shirt when sharing this Instagram photo earlier this month

And it’s more than just the pose, the stylish sisters also balance their baggy tops by wearing figure-hugging pants that still allow them to show off their famous hourglass shapes.

They are such a fan of the look, they even rely on the pose when they are wearing next to nothing.

Both Kendall and Kylie have shared numerous photos of themselves lifting up the bands of their underwear to reveal even more of their hips.

Kylie, who is reportedly expecting her first child with her boyfriend Travis Scott, is still wearing plenty of baggy tops, but alleged mother-to-be has refrained from using her trademark pose in her most recent Instagram posts.