‘Being deployed in such a remote place, I learned to appreciate moments of solitude, to be the only person around for miles, away from the hustle of the city, away from other issues, no problems, just peace and the appreciation of life and the gifts of our senses. I guess the experience of living on America’s northernmost airbase prepared me for the solitude that the pandemic has brought with it,’ MSgt B muses.

The former master sergeant, who wishes to remain anonymous, was stationed at Thule Air Base, positioned 1,524km (950 miles) from the North Pole, from 2000 to 2001 for 12 months, living through four months of complete darkness and temperatures as low as -30C.

While the austere conditions took a bit of getting used to, MSgt B says one of his most trying moments at the remote military outpost was learning about the terrorist attacks back in his home country on September 11, 2001.

An aerial view of Thule Air Base in winter, which is the United States Air Force’s northernmost base. It’s located 1,118km (695 miles) north of the Arctic Circle, and 1,524km (950 miles) south of the North Pole on the northwest side of Greenland 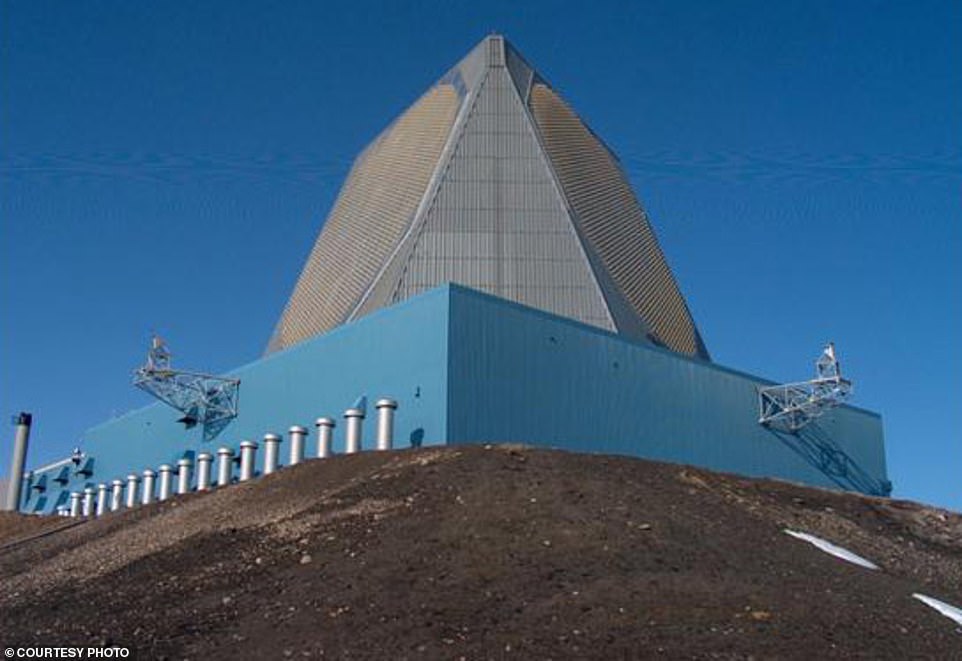 The father-of-three and grandfather-of-four remembers: ‘I had just finished a workout at the little gym and was going to my office on the base when I received word of the events unfolding in the U.S.

‘Suffice to say that the last month of my tour was fraught with concern for my family as most communications were suspended except those for official purposes.’

Another tense moment MSgt B remembers was when the base flooded in the summer of 2000 after an ice dam broke.

Four bridges were destroyed due to the flooding, leaving many personnel stuck on different sites around the base.

MSgt B says, touching on the event: ‘This disaster led to me working a 31-hour shift as leadership discussed how to change-out the work crews who were stuck. It was a very tough few days.’

Thule Air Base was founded in 1953 by the U.S. when the nuclear arms race kicked off amid the Cold War.

It was built in secret after the Danish authorities struck up a deal allowing America to set up an airbase in Greenland (it was ruled by the Danish until 1979).

The U.S. government established a Strategic Air Command unit at Thule and later an anti-aircraft missile artillery group and a Ballistic Missile Early Warning System (BMEWS). No nuclear warheads were ever permitted. 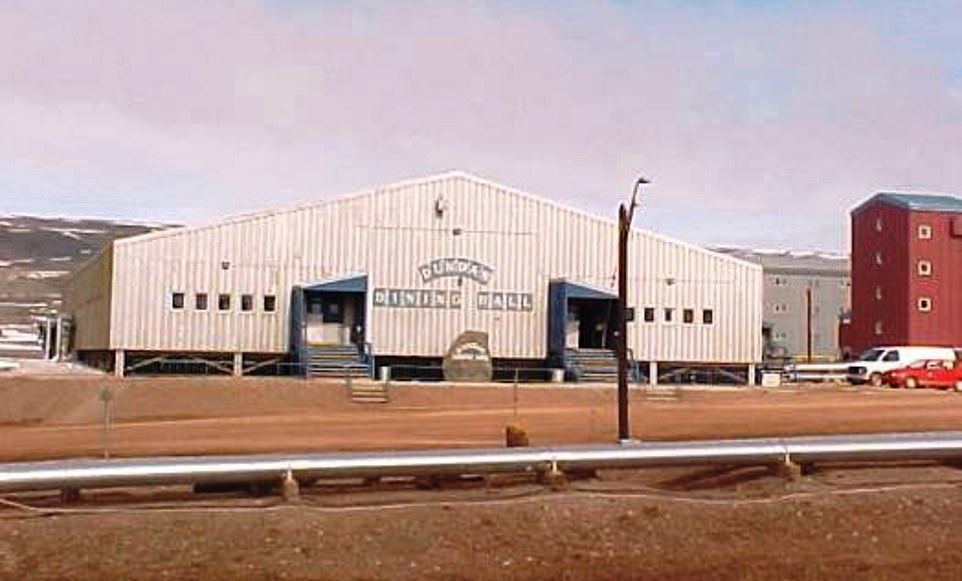 Thule Air Base was founded in 1953 by the U.S when the nuclear arms race kicked off amid the Cold War. Above, an image of the base’s dining hall 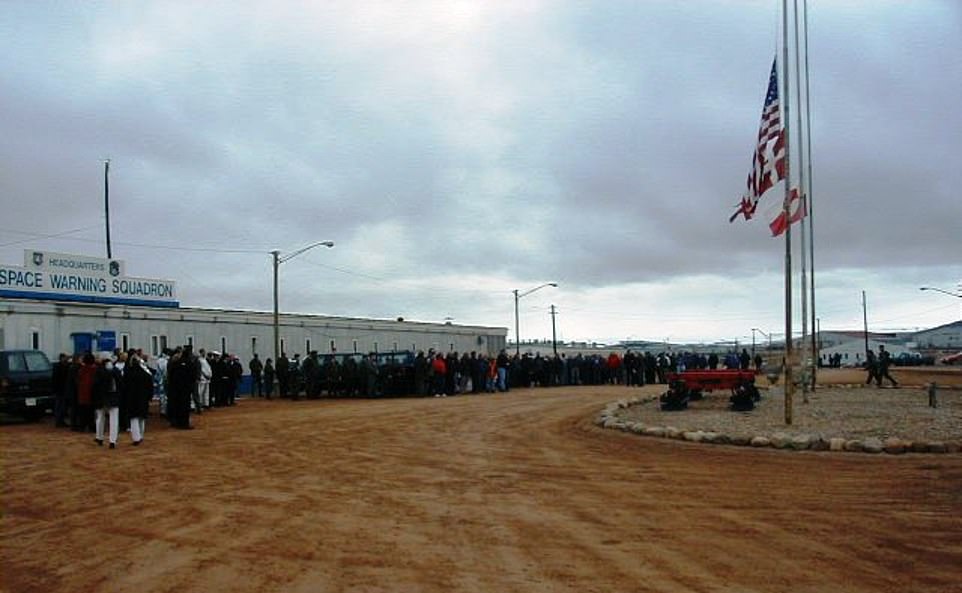 MSgt B’S role within the Space Warning Squadron was as a crew chief, instructing staff, and as a technical sergeant, helping to service and repair equipment

The site was strategically selected because of its positioning on the globe, with its radars projecting over the Arctic Ocean and Russia’s northern coast.

MSgt B was assigned to the 12th Space Warning Squadron, which operates the Ballistic Missile Early Warning System from a site around 31 miles from the main base.

The high-tech 10-storey radar system, installed in 1961, tracks the trajectories of hundreds of satellites and to watch for activities that may indicate the U.S. is under threat of nuclear attack.

It can apparently track an object the size of a tennis ball 3,000 miles away.

MSgt B’S role within the squadron was as a crew chief, instructing staff, and as a technical sergeant, helping to service and repair equipment.

When he first arrived at the base, after flying directly from Baltimore in the U.S. on a contracted flight called the ‘Freedom Bird’, he got the lowdown from the first sergeant on what his coworkers would be like.

The base comprised four nationalities with Danes and Americans in the majority, and some Greenlanders and Canadians too.

Recalling the briefing he received, MSgt B says with a chuckle: ‘The first sergeant advised me that there were three types of people there; hunks, chunks or drunks. Meaning that most folks who chose hunks, would be in the gym all the time.

‘Well, as a non-drinker, I was not an everyday occupant of the TOW club. As someone who tries to take care of themselves, I was not watching television all the time, so my choice was to maintain as healthy a lifestyle as possible.’ 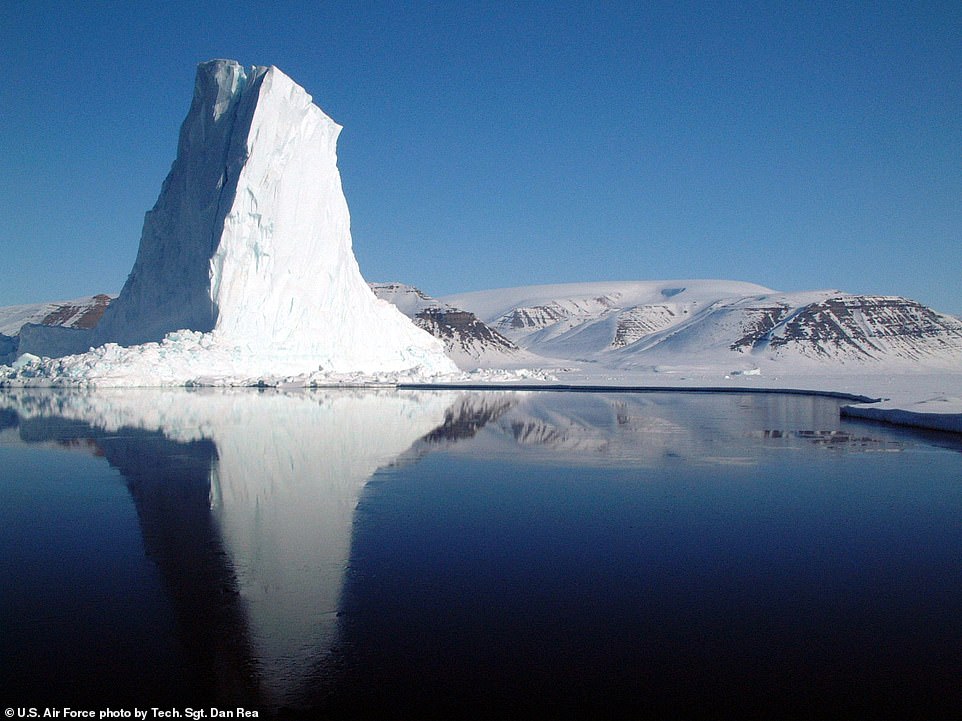 MSgt B loved the otherworldly landscape around the military camp. Above, an iceberg at the edge of Baffin Bay taken by a member of the U.S. Air Force 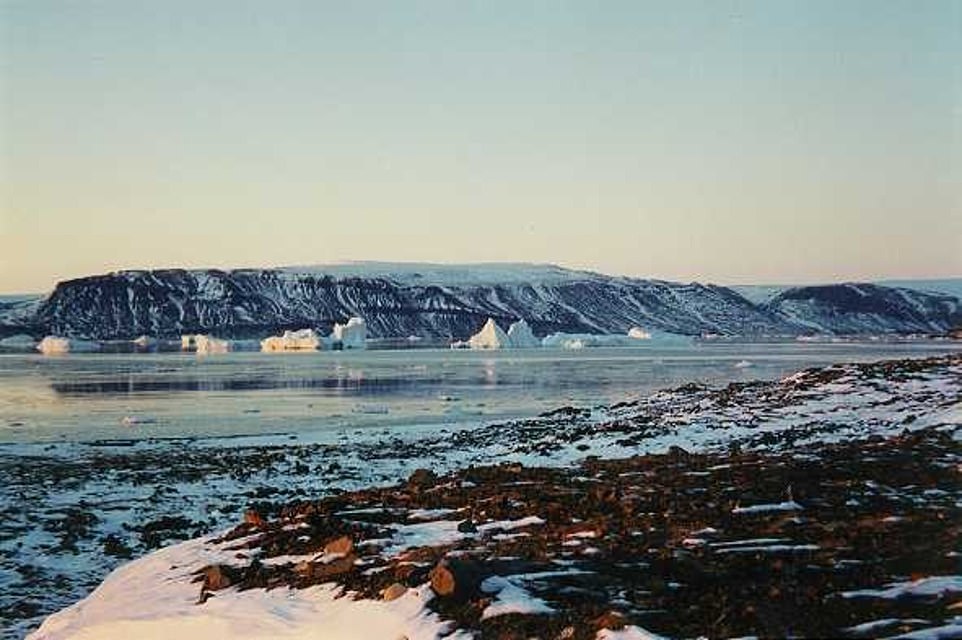 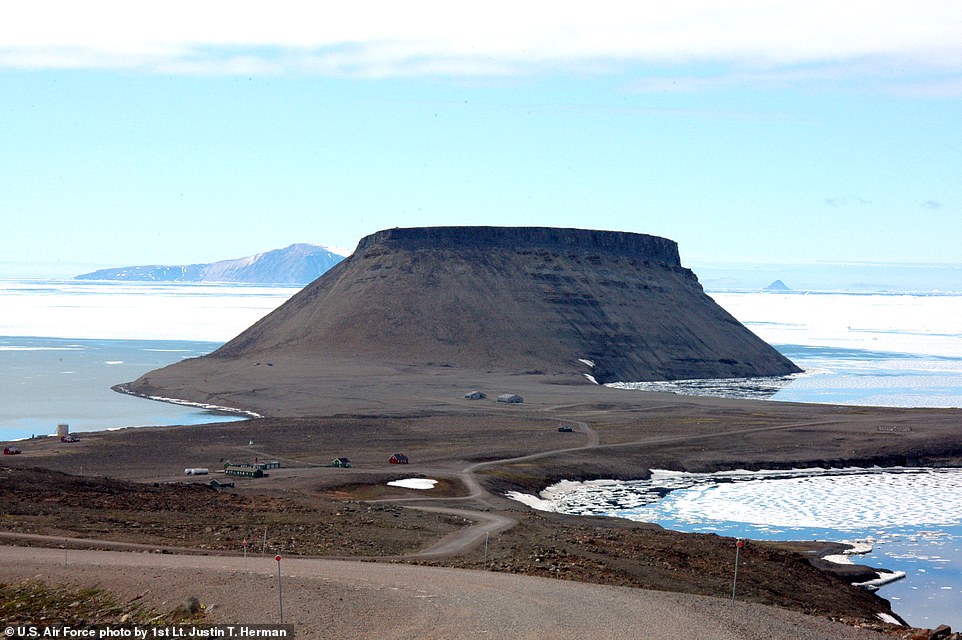 Mount Dundas, above, is located next to the air base. It is the location of an annual golf tournament, with participants climbing 800 feet of shale rock to reach a nine-hole par-three course

MSgt B quickly fitted in, with some of his closest acquaintances being ‘the fine folks from the Canadian Air Force’ who had ‘great insight, input and zeal for life’.

He said of his Greenlandic and Danish colleagues that they were ‘very nice and welcoming to their culture’.

Although the Thule Air Base looks quite stark, MSgt B said it was a comfortable place and his base at ‘J-Site’ – where the Ballistic Missile Early Warning System (BMEWS) is located – had a cafeteria, gym, laundry facilities, shower and bedding areas.

The facilities made the 24-hour shifts a little more bearable, with copious amounts of coffee to hand.

Growing up in a small community in the mountains of Northern New Mexico, MSgt B didn’t find the remote location too overwhelming.

Before landing in Greenland, he had been posted in several ‘austere locations’ as part of his role in the military looking after mobile communications.

While the solitude wasn’t a problem, one thing he did struggle with, however, was leaving his family behind in Florida.

He started by calling his three daughters and wife every day to see how they were doing. But when his youngest daughter – devastated that he’d left home – stopped speaking to him, he reverted to ‘that age-old form of communication and lost art form, letter writing’.

‘By writing, I could “speak” directly with them one-on-one,’ he adds.

Along with his family, another thing MSgt B occasionally missed was fresh fruit and vegetables. Due to the weather – winds at Thule have been known to reach 200mph – sometimes shipments of food were delayed.

But overall he says the food at Thule was ‘very good’.

He continues: ‘Our cooks were Danish and they were able to piece together some amazing cuisine for us.

‘One great culinary memory was a dinner at the TOW clubhouse, a five-course meal of extraordinary quality and a highlight of my time there with these amazing military professionals.’ 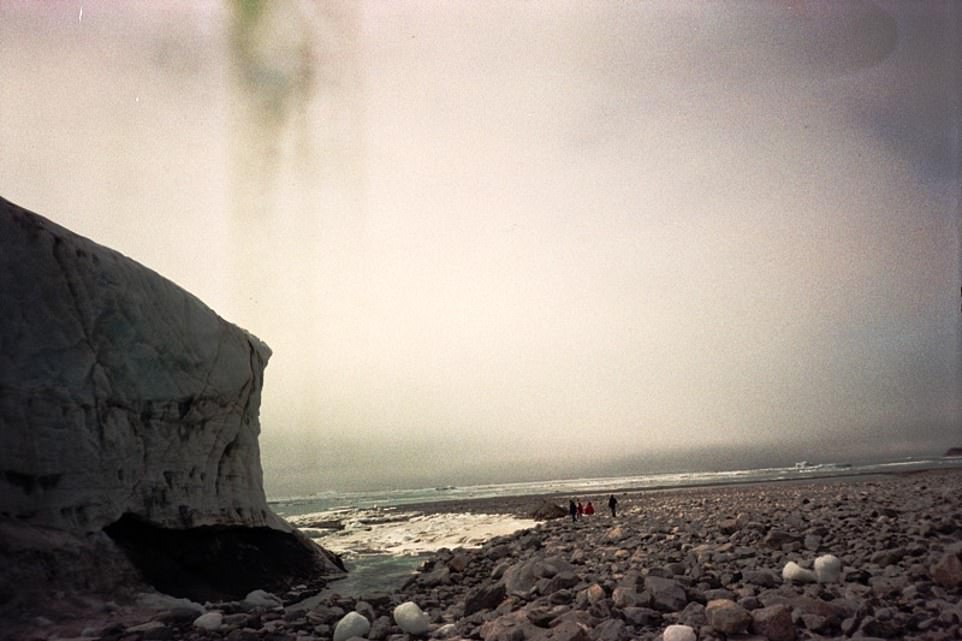 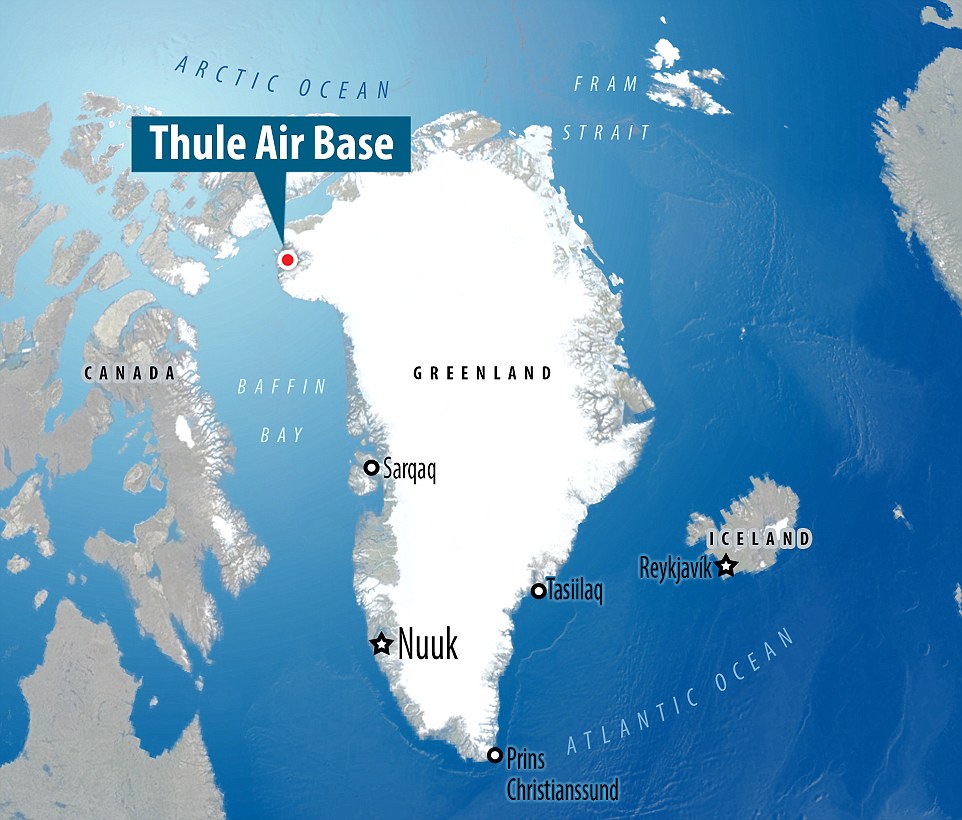 The Thule Air Base site was strategically selected because of its location between Moscow and Washington D.C

Along with the food being a lasting memory of his time at Thule Air Base, the otherworldly scenery, the characterful wildlife and stunning night skies are other things that will stay with MSgt B forever.

Occasionally he would find ‘curious’ Arctic foxes following him on the base, on the prowl for food, and during the summer he went to Baffin Bay on the coast to look for gannets.

He also received an award while at the base ‘for going above and beyond our normal work activities’ – and the prize was a helicopter tour of the nearby Pituffik Glacier.

The aircraft landed so they could look at prehistoric-looking, shaggy-haired musk ox.

‘The helicopter ride was a truly unique opportunity for me to view Greenland in all its beauty,’ the wildlife enthusiast notes.

After leaving Thule Air Base, MSgt B served in the military for several more years before hanging up his uniform in 2005 at the ‘ripe old age of 38’.

Now aged 54, he has kept the aviation theme alive working at Kennedy Space Center in Florida as a safety console operator.

While he still looks back at his time in Greenland with fondness, MSgt B has come to love his home state and he says everyone should explore it if they have time.

He concludes: ‘I find that when people say they took a vacation in Florida, when I ask where they spent time, I normally hear “Disney”, to which I say, “Then you have yet to ‘see’ Florida”. This amazing state is very unique, although for dazzling night skies and a sense of vastness Greenland beats it hands down.’