Savers who stashed away extra cash totalling around £150billion during the pandemic look set to turbocharge the economy during the rest of 2021, City experts said after analysing the Bank of England’s new forecasts.

Laith Khalaf, an analyst at AJ Bell, said: ‘The Bank of England is expecting a consumer spending spree to fuel an explosive economic recovery this year, funded by the war chest savers have built up throughout the pandemic.’

Back in February, the BoE predicted 5 per cent of these excess savings would be spent, but that has now been upgraded to 10 per cent over a three-year period.

Banking on you: Laith Khalaf, an analyst at AJ Bell, said: ‘The Bank of England is expecting a consumer spending spree to fuel an explosive economic recovery this year’

According to Mr Khalaf, the doubling of this specific saving and spending-related forecast tells us ‘there is a high degree of uncertainty in estimates of just how extravagant consumer spending is going to be’.

He added: ‘This is a unique situation, where consumers have been restrained by law and are now being gradually let off the leash, so even the best spreadsheets at the Bank of England aren’t going to nail this forecast with any precision.

‘If consumers really let rip, the economy could be heading for a big boom. But if they play it safe, that will moderate the recovery.’

Giles Coghlan, chief currency analyst at HYCM, said: ‘There is an expectation that the estimated £150billion of savings that consumers have accumulated over the past 14 months or so will steadily be released into the economy in the months ahead.

‘Uncertainty is dissipating, and we are seeing the GBP and FTSE 100 go on initial mild bullish runs immediately after the decision. In the medium-term, as lockdown measures ease, we could expect this trend to continue.’

He added: ‘Of course, the positive performance of GBP will be welcomed by holidaymakers; as many Britons prepare to travel abroad again later this year, the improved strength of sterling against the likes of the USD and euro will certainly help consumers.’ 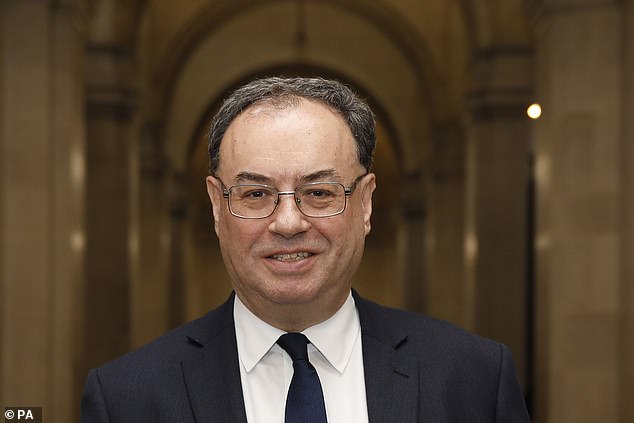 On hold: The Bank of England’s Monetary Policy Committee held interest rates at 0.1% in a unanimous and anticipated move

GDP predictions: The Bank of England predicts gross domestic product will rebound by 7.25% in 2021 up from its previous prediction of 5%

Cost of living: Inflation is below the Bank of England’s 2%, but its economists expect this to rise to around the target this year

Pent-up demand and consumer optimism looks set to bolster the economy to such as extent that the BoE also hiked the main gross domestic product forecasts. Business investment is also expected to spike in the coming months, growing by 7 per cent this year and 13.5 per cent next year.

This is ‘Super-deduction in action’, according to David Owen, chief European economist at Jefferies.

At this rate, annual growth will be the strongest since records began in 1949. Back in February the BoE predicted the economy would grow by around 5 per cent in 2021.

GDP grew 0.4 per cent in February, after a 2.2 per cent drop in January, even though England was still in full lockdown.

Paul Danis, head of asset allocation at Brewin Dolphin, said: ‘Given the UK economy’s service-oriented nature and the fast vaccine roll out, it’s likely that growth will be stronger than almost any major economy over the last three quarters of this year.’

But, the BoE said: ‘After 2021, the pace of GDP growth is expected to slow as the boost from some of those factors wanes.’

Spending, incomes and the number of jobs all remain lower than they were before the pandemic, according to the Bank of England

There’s also the crucial issue of inflation. The BoE thinks inflation will top the Government 2 per cent target by the end of this year.

It said: ‘In the central projection, CPI inflation rises temporarily above the 2% target towards the end of 2021, owing mainly to developments in energy prices.

‘These transitory developments should have few direct implications for inflation over the medium term, however. In the central projection, conditioned on the market path for interest rates, inflation returns to around 2% in the medium term.’

Hikes in the costs of fuel and clothes pushed up the rate of inflation to 0.7 per cent in March, figures from the Office for National Statistics showed last month. This marked a 0.3 per cent on the month before.

Inflation had been as low as 0.4 per cent in February due to hefty falls in clothing and footwear costs, but started growing again as the country slowly emerged out of the pandemic. 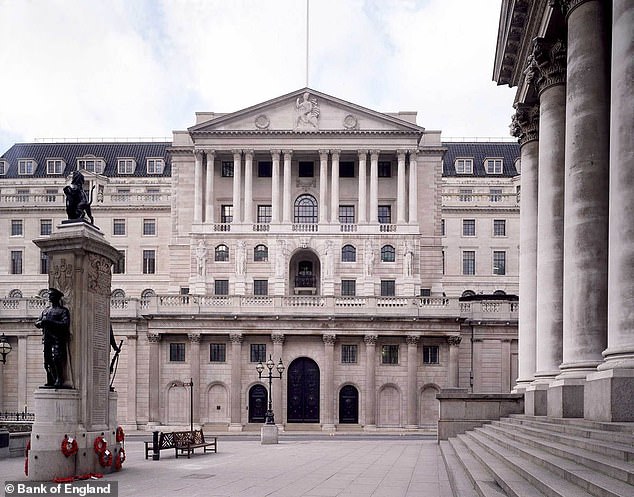 What will happen? The Bank of England thinks inflation will top the Government 2% target by the end of this year

While interest rates were kept on hold at 0.1 per cent today and the prospect of negative interest rates is off the cards for now, Mr Khalaf thinks rising inflation and economic growth will force the BoE to, at some stage, reconsider its options, and think about increasing interest rates.

He said: ‘The improved outlook for the UK economy is extremely positive, but it does mean markets will increasingly turn their attention to interest rate rises, and that could create some turbulence.

‘Over the last twelve years, low interest rates have inflated the prices of a wide range of assets, including shares, bonds and property. Tighter monetary policy would mean these assets start to feel the pull of economic gravity a bit more forcefully.

‘Shares and property prices might well get an upward push from robust economic growth, which could offset the negative effects of higher interest rates. But government bonds wouldn’t escape so lightly and could face a double whammy of both tighter monetary policy and a strong economic recovery, which would reduce the appeal of holding safe haven assets.’

However, the BoE has revised down its longer-term inflation forecast and see on a three-year view inflation ‘more below target’ and actually below 2 per cent throughout each and every quarter of 2023, Mr Owen noted.

Central bank officials also did not change the size of their bond-buying stimulus programme at £895billion.

Luke Bartholomew, senior economist at Aberdeen Standard Investments, said: ‘The Bank now sees activity regaining its pre-Covid levels by the end of this year, but of course in normal times the economy would have enjoyed nearly two years of extra growth between early 2020 when Covid hit, and December 2021.

‘So there will still be a big gap between where the economy is and where it should be at that point. It is this gap that will keep monetary policy very accommodative over the next few years even as the economy posts some extremely strong growth numbers, and inflation picks-up somewhat in the short run.’

The climate remains ‘tough’ for savers lingering on rock-bottom rates in cash accounts spanning banks and building societies up and down the country.

Andy Russell, chief executive of Wealthify, added: ‘The current climate is tough on savers. It’s been over a year since the Bank of England set the record low interest rate of 0.1% and many people are still stuck in cash savings accounts that are failing to beat the rate of inflation.

‘With rates remaining painfully low, it is advisable to balance having instant access to a rainy day fund with investing to meet longer term financial goals.’ 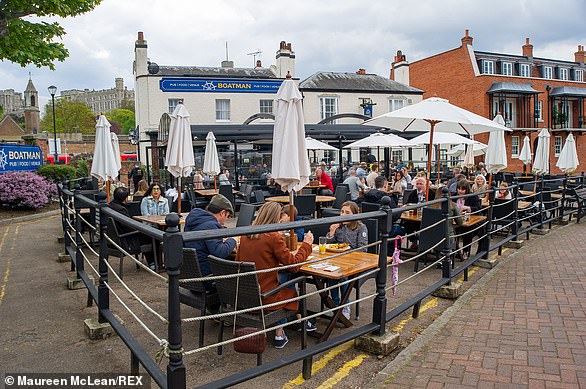 The sector, which accounts for over three-quarters of all activity in the economy, had the fastest rise in output since October 2013.

The purchasing managers’ index from IHS Markit/CIPS climbed to 61 for April, up from 56.3 in March. Any figure above 50 shows growth in the sector.

‘April data illustrates that a surge of pent-up demand has started to flow through the UK economy, following the loosening of pandemic restrictions, which lifted private sector growth to its highest since October 2013,’ said Tim Moore, economics director at survey compiler IHS Markit.

He said the plans for reopening leisure, hospitality and other customer-facing activities ‘resulted in a sharp increase in forward bookings and new project starts across the service sector.’

He added that if the rebound in order books continues along its recent pace during the rest of the second quarter, ‘then service sector output growth looks very likely to surpass the survey-record high seen back in April 1997.