How many of you have worked for the BBC? Festive University Challenge featured array of staff

Your starter for ten: How many of you have worked for the BBC? Festive University Challenge featured array of former and current staff

They’re the distinguished alumni of some of our top universities.

But with names such as Paul Gambaccini, Reeta Chakrabarti, Victoria Gill and Sanchia Berg among the contestants on the latest Christmas University Challenge series, viewers could be forgiven for thinking that a spell at the BBC might also have won them a seat on the show.

Of the 56 competitors making up the 14 teams, nearly 20 either work for the corporation or have worked with it in recent years.

Featured on this year’s Christmas specials were comedian Ivo Graham, who regularly appeared on Mock The Week before its cancellation and Paul Gambaccini, from Radio 2 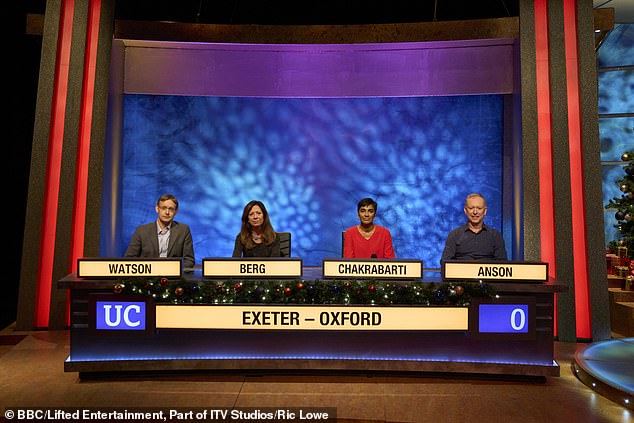 Exeter College, Oxford was captained by Reeta Chakrabati, who studied English and French at the college between 1984 and 1988

Ms Gill is science reporter and Ms Berg a news correspondent at the BBC.

Other participants in the BBC2 series, which began on December 19 and concludes on Friday, include directors, screenwriters, comedians and actors who have all worked at the corporation.

A source said that, while the show is made by a company owned by ITV, the corporation is very involved in who appears.

A TV insider said: ‘The celebrity teams look like they’re booked by someone just opening the BBC staff phone directory.’

A BBC spokesman said the programme ‘features a range of distinguished alumni.’