How many people have died of Covid-19 in YOUR area? Interactive map shows victims by postcode

Seventy-one areas in England and Wales didn’t suffer a single death from Covid-19 in July, according to an interactive map of official data.

The map adds to growing evidence that Britain’s Covid-19 outbreak is fading out and shows a postcode-by-postcode breakdown of where the most people have died.

Crabtree and Fir Vale in Sheffield had the most Covid-19 deaths between March and July, with 67, followed by Bishop Auckland in County Durham with 38.

The North West of England had the highest coronavirus mortality rate for the month of July, but figures for all regions have decreased since the previous month. There were 2.8 deaths involving Covid-19 per 100,000 of population for the North West compared with 0.3 in the South West and 1.2 in London.

People in deprived areas were twice as likely to die of Covid-19 than those in wealthy areas, the figures described as ‘sobering’ showed.

The Office for National Statistics figures are based on all deaths where Covid-19 was mentioned on the death certificate and which had been registered by August 15.

There were 51,831 Covid-19 deaths between 1 March and 31 July this year, representing a fifth of deaths of all causes.

The total Covid-19 death toll from the ONS is higher than that given by the Department of Health (41,477) because the Government count victims only if they have had a positive test result and died within 28 days of being diagnosed.

But tens of thousands of infected Britons weren’t tested in the spring because of a lack of tests. Many would not have even suffered any symptoms, meaning they never felt the need to get swabbed.

WHICH AUTHORITIES HAVE HAD ZERO COVID-19 DEATHS IN JULY?

But this has significantly declined over the pandemic period since April, to 20.8 in May, 5.9 in June and 1.8 in July.

Some 30 per cent of deaths in London from March to July have been as a result of suspected or confirmed Covid-19, the data shows. This compares with 11.5 per cent in the South West.

Figures today show the number of deaths that were caused by or at least partially blamed on coronavirus on a local scale.

Looking at cumulative cases, after Crabtree and Fir Vale and Bishop Auckland, Church End in Brent recorded the most Covid-19 deaths (36).

This was followed by Halton Lea and Brookvale (Cheshire), Chellaston West and Shelton Lock (Derby), Nascot Wood (Watford) and Cramlington Town and Beaconhill (Northumberland), all with 34 each over the five month period.

But when looking at overall deaths, including those caused by Covid-19, the data paints a different picture.

Heene, in Worthing, has had the most overall deaths (137), with only 24 caused by the coronavirus.

Of the 336 local authority areas in England and Wales, 71 areas had no deaths in July involving Covid-19.

Only two areas recorded more than 20 deaths for every 100,000 people in July – Leicester (24), which was the first and only place in England to be placed under a full-scale local lockdown, and Ashford, in Kent (21).

A further 239 recorded fewer than 10 deaths involving Covid-19, but this may change as more deaths are registered, the ONS said.

The North West of England, including Lancashire, Cumbria, Greater Manchester, Mersey and Cheshire, had the highest coronavirus mortality rate for the month of July.

But figures for all regions have decreased since the previous month, while many parts of the north-west were put under stricter coronavirus measures to tackle rising cases.

When looking at cumulative numbers, which are not in proportion to population size, Thursaston and Irby, in Wirral, had the highest number of Covid-19 deaths in July.

But it still only had six, followed by St Matthews and Highfields North in Leicester, with five.

‘Sadly, this is nothing new. In more ordinary times, the poorest among us were almost twice as likely to die on any given day than the richest.

‘It was bad for your health to be poor before the pandemic; COVID-19 has made it even worse. Much ill health is avoidable.

‘Today’s figures make it plain that the Government has a huge task ahead to begin closing this health gap, which is growing.’

More reassuring data published in a study last night showed that no healthy children have been killed by Covid-19. 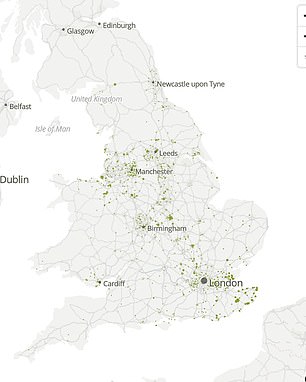 Research led by the University of Liverpool found that six children died during Britain’s crisis but that all of them were seriously ill with conditions such as cerebral palsy or cancer before they caught the virus.

The study found that the risk to children is ‘strikingly low’, only a tiny proportion of them end up in hospital and deaths are ‘exceptionally rare’.

Six children under the age of 15 have died of coronavirus in England and Wales since the start of the pandemic, along with nine 15 to 19-year-olds.

This compares with 52,082 victims in all other age groups up to August 14, according to the Office for National Statistics.

Scientists led by the University of Liverpool found that one per cent of hospitalised children died, compared to a significantly higher 27 per cent of adults. 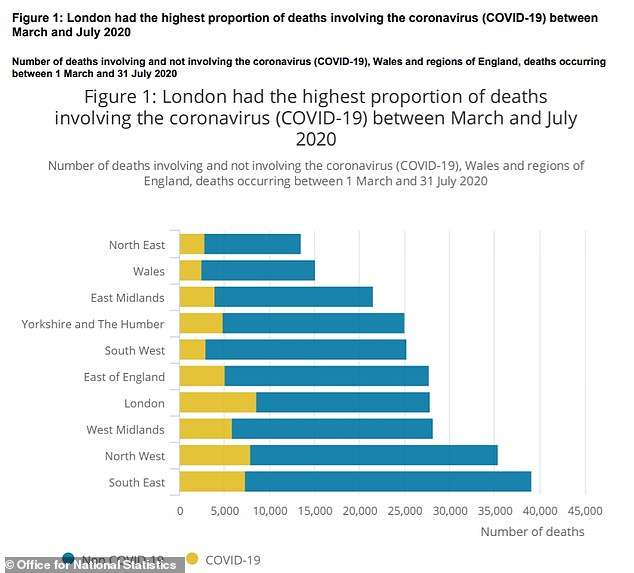 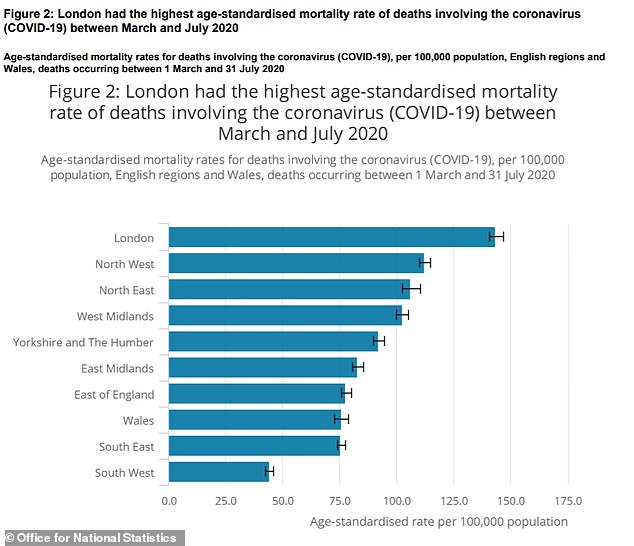 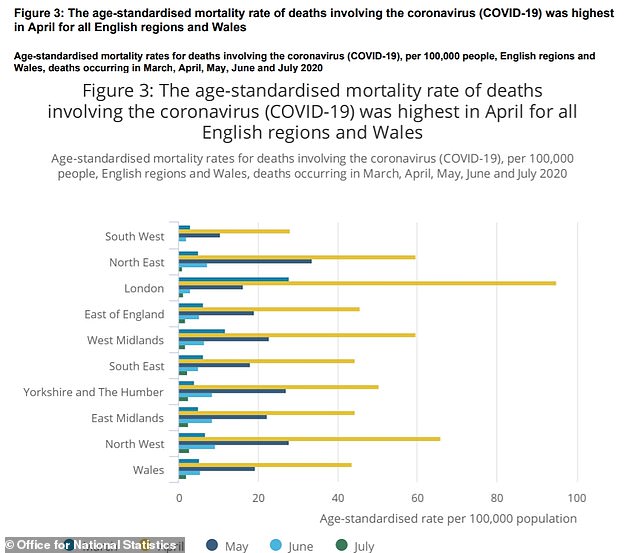 This means that while one in four adults who ended up in hospital with Covid-19 died of it, only one in 100 children did.

The research, published in the prestigious British Medical Journal, comes amid a fiery debate about whether children in England should return to school in September, with critics saying there is not enough evidence they will be safe.

Parents should be reassured that their children will not be put in danger by returning to school, the scientists who led the study said.

But unions and other experts are concerned that schools reopening will not put children at risk but their parents, grandparents and adult staff at the school as children transport it between households.

‘The study is reassuring,’ said Dr Liz Whittaker, an infectious disease expert at the Royal College of Paediatrics and Child Health.

‘It echoes other studies which have reported low numbers of Covid infection over a six month period – 651 children out of a paediatric population of 16million.

Professor Calum Semple, an expert in outbreak medicine and child health at the University of Liverpool who led the study, said: ‘Severe disease is rare and death is vanishingly rare.

‘They should be confident that their children are not going to be put at direct harm by going back to school and we do know that they are harmed by being kept away from school because of the lack of educational opportunities, and that’s affecting mental health.’