Meghan and Beyoncé greeted like ‘two old friends’, with the pop royalty sharing a loving hug and a chat about parenthood at the Lion King European premiere tonight.

The Duchess of Sussex, 37, was seen hugging the queen of pop at the event in London’s Leicester Square, with the pair appearing close – despite it being their first meeting.

And according to body language expert Judi James, the two stars treated one another with close affection and indicated how excited they were to meet one another.

Judi pointed to the women’s conversion of a formal cheek-kiss into a loving hug, and suggests they continue their deeply affectionate moment by clasping hands.

The body language expert suggested such a move indicates how excited the two were to meet one another, and is a ‘strong-tie sign’. 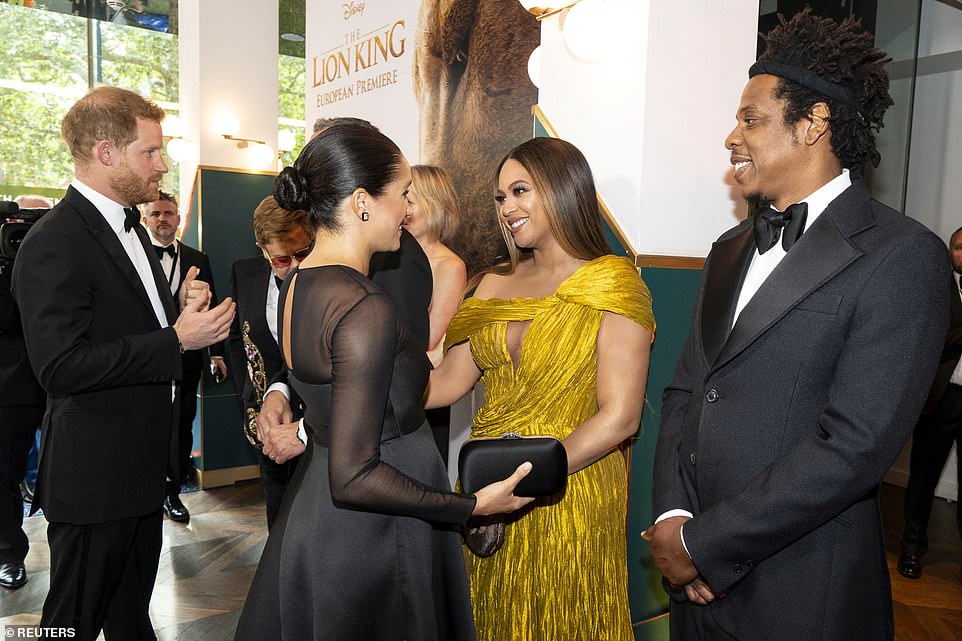 Judy James pointed to the women continued to clasp hands as they spoke after the embrace, as well as the sustained eye contact, as a sign of affection 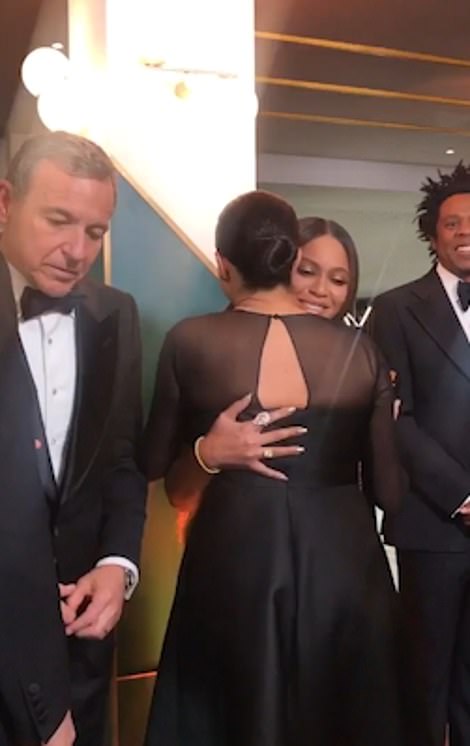 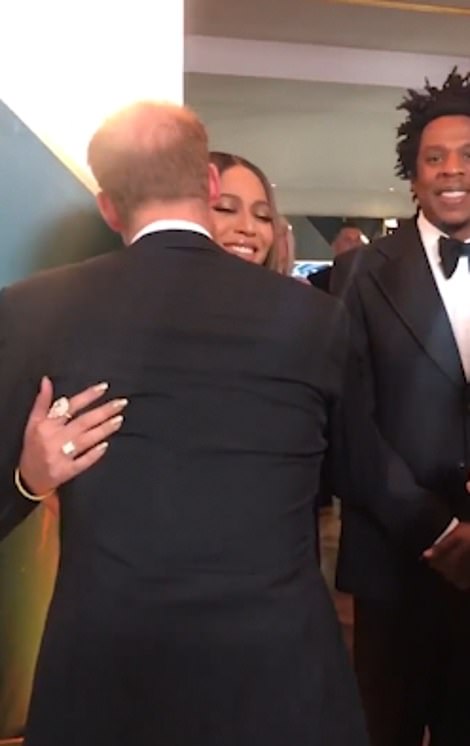 Meghan, 37, attended the star studded event in London’s Leicester Square with husband Prince Harry, 34, and was seen embracing Beyoncé, who declared her love for the royal couple before telling the Duchess of Sussex her new baby son Archie was ‘so beautiful’.

Harry and Meghan, who will watch the live-action remake of the classic 1990s film this evening, received parenting advice from Beyoncé and Jay-Z, with the couple telling the new parents to ‘always find time for themselves.’

Despite being on maternity leave, it is the second appearance the former Suits actress has made this weekend, after she watched close friend Serena Williams play in the Wimbledon final alongside sister-in-law Kate Middleton, 37, yesterday. It followed a tumultuous week for the Duchess after criticism of her privacy demands.

While Meghan has walked plenty of red carpets in her former days as an actress, tonight’s film premiere is her first as a royal. 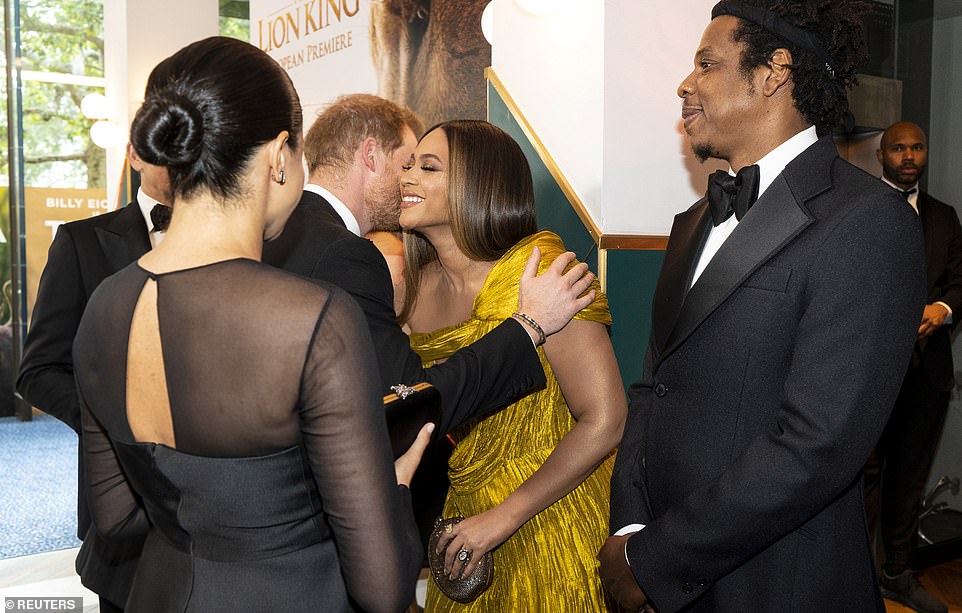 Beyonce appeared affectionate with both Harry and Meghan, closing her eyes as she embraced both royals at the premiere this evening 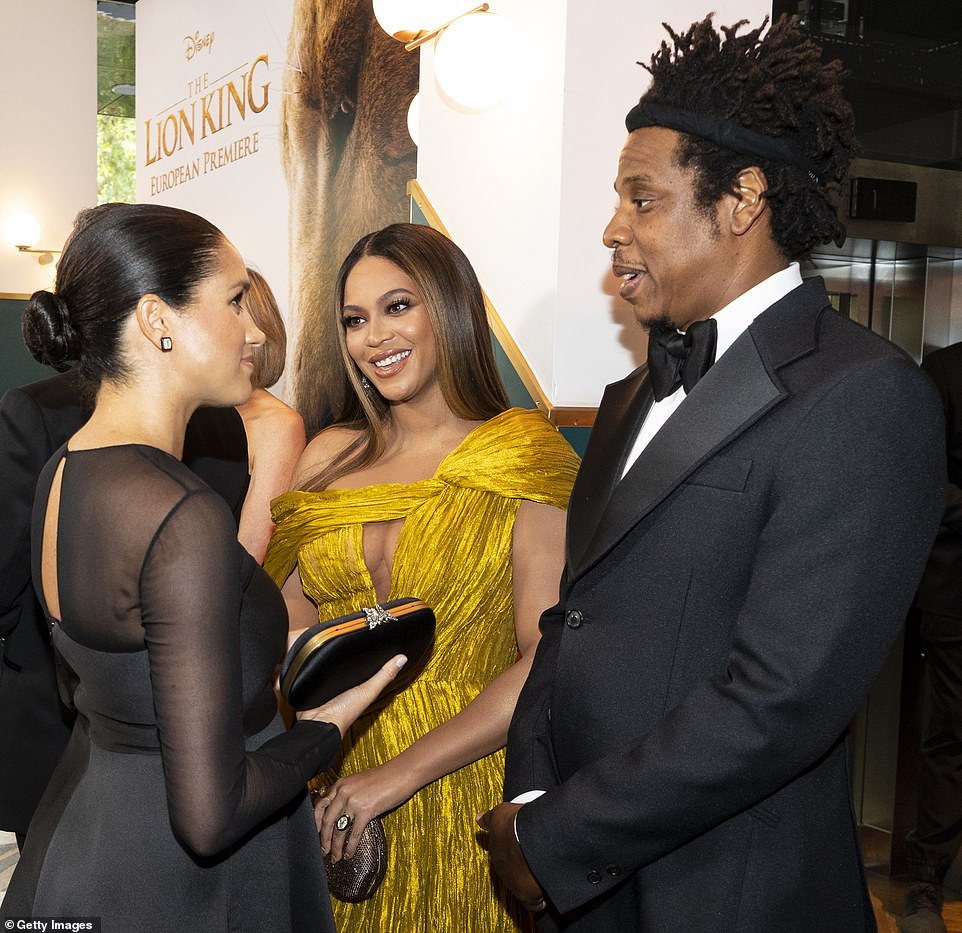 While the A-list power couples spoke about parenting, Meghan and Beyonce continued clasping hands in a move that Judi said indicated their affection for one another

Judi revealed that the greeting between Beyonce and Meghan was ‘intimate’ suggesting it was the meeting of ‘two Hollywood power couples’.

She revealed that the superstar pair had used six-non verbal gestures to register their close affection between them.

She said: ‘First there was the head-tilt of recognition from the duchess as she moved to Beyonce in the line-up. This small signal would show she was greeting a friend, rather than a stranger. 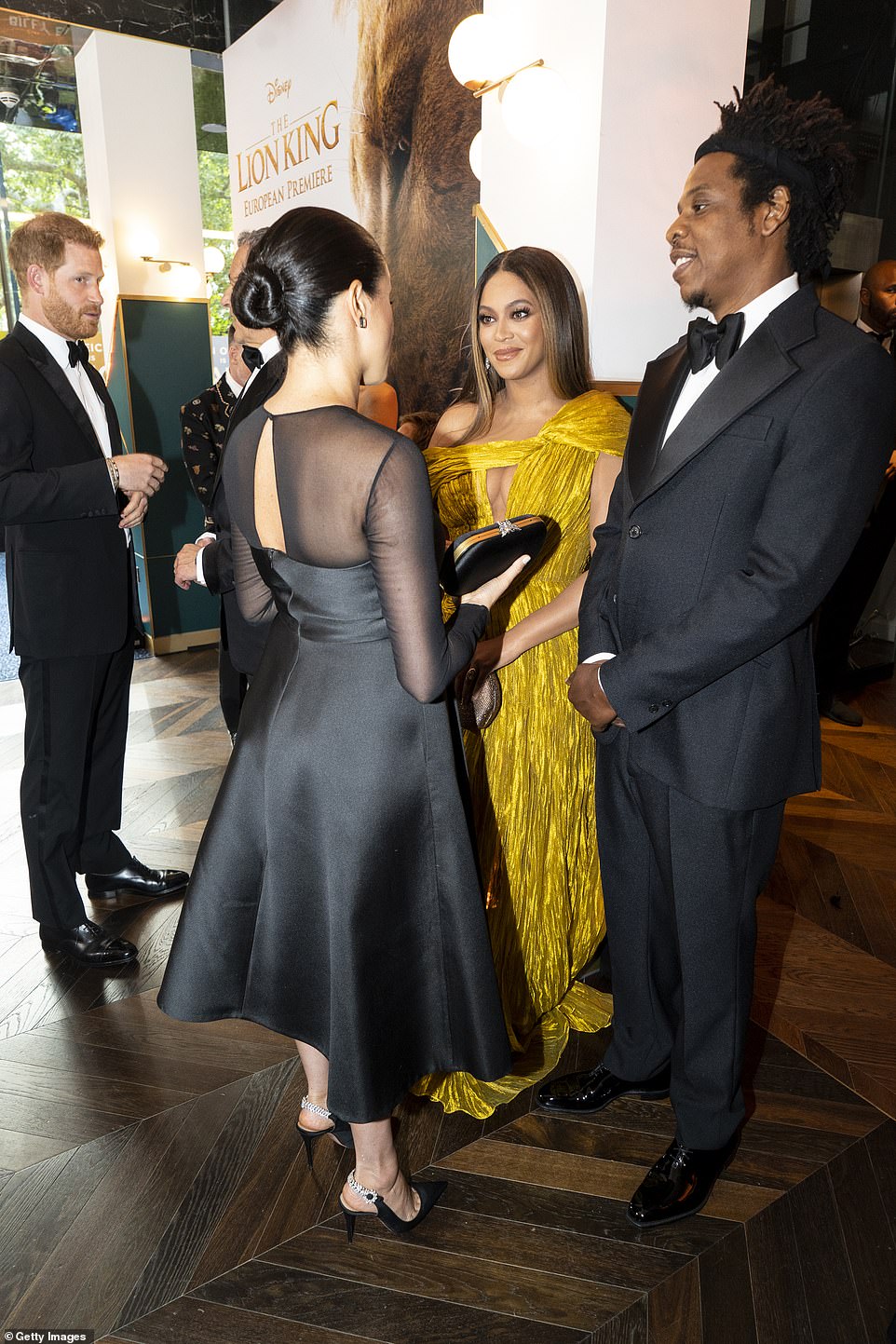 The Duchess of Sussex paused to speak to Beyonce and Jay-Z before she was joined by husband Prince Harry.

‘Then Meghan raised her left hand to announce and instigate the cheek-kiss greeting and touched it on Beyonce’s arm.’

She continued: ‘Beyonce’s hand clasped Meghan’s waist but then the two women convert what could have been a formal cheek-kiss into a loving hug.

‘It’s Beyonce who closed her eyes in the hug to again signal close friendship and the women kept the hold going as they parted their torsos to chat.’

‘It was the hand clasp between them that kept the affectionate non-verbal communication going.’ 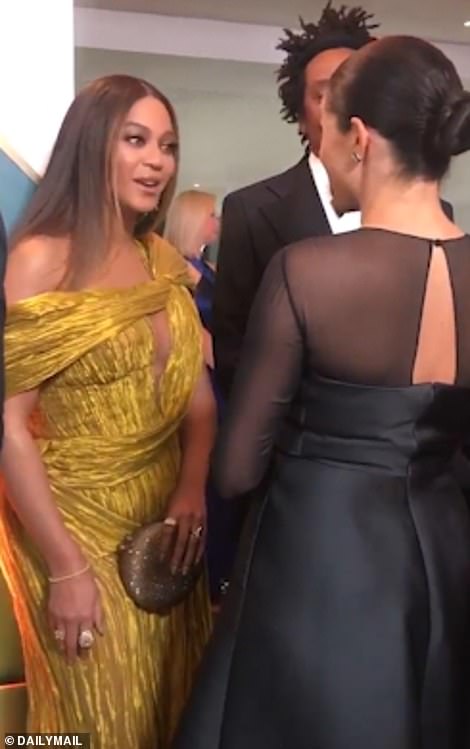 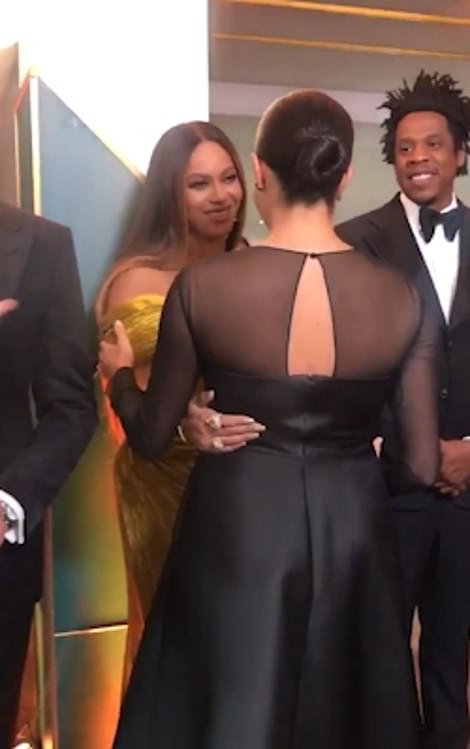 Meghan and Beyonce’s reflected motions indicate their desired closeness, including a head tilt from Meghan and an affectionate touch from both women (right)

She added: ‘Both women used a hand-judder gesture as they held hands, which is a strong tie-sign that can be used to signal how much you have missed someone or how pleased or excited you are to see them again.’

Following their glittering appearance in front of the world’s press, the Duke and Duchess met the cast and crew during a line-up inside the Odeon in Leicester Square.

The singer, dressed in a daring yellow evening gown split to the thigh, rubbed Meghan, in a black cocktail dress, on the back as the pair continued to embrace for several seconds.

They then held hands and chatted intently as Jay-Z looked on. There was also a big hug from the duchess for the rapper who congratulated her, presumably on the birth of baby Archie.

‘The baby, so beautiful,’ cooed Beyoncé. 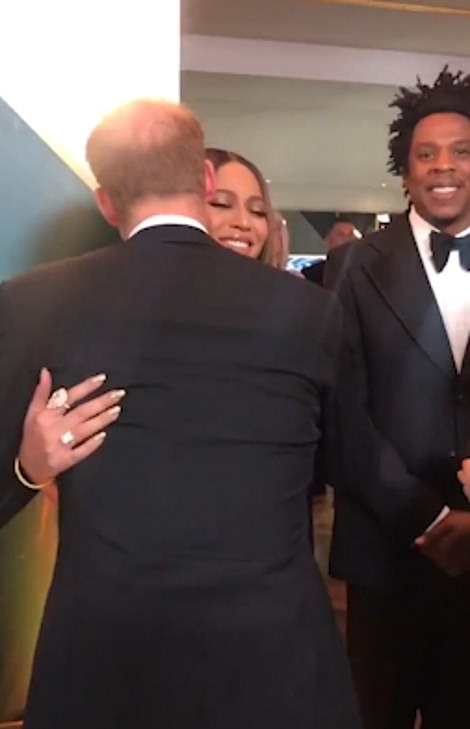 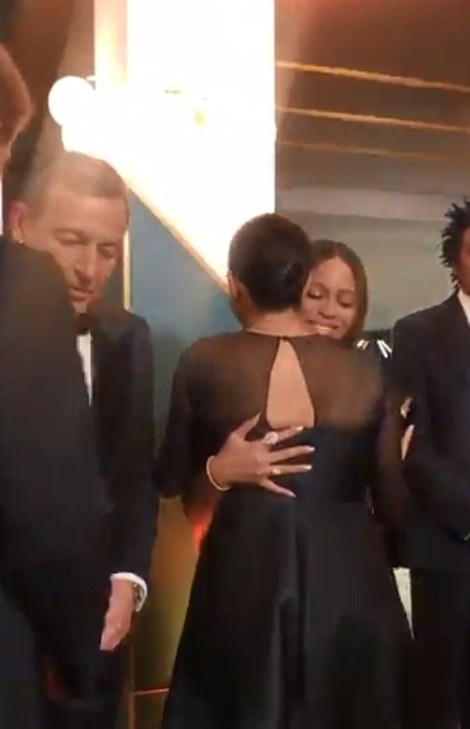 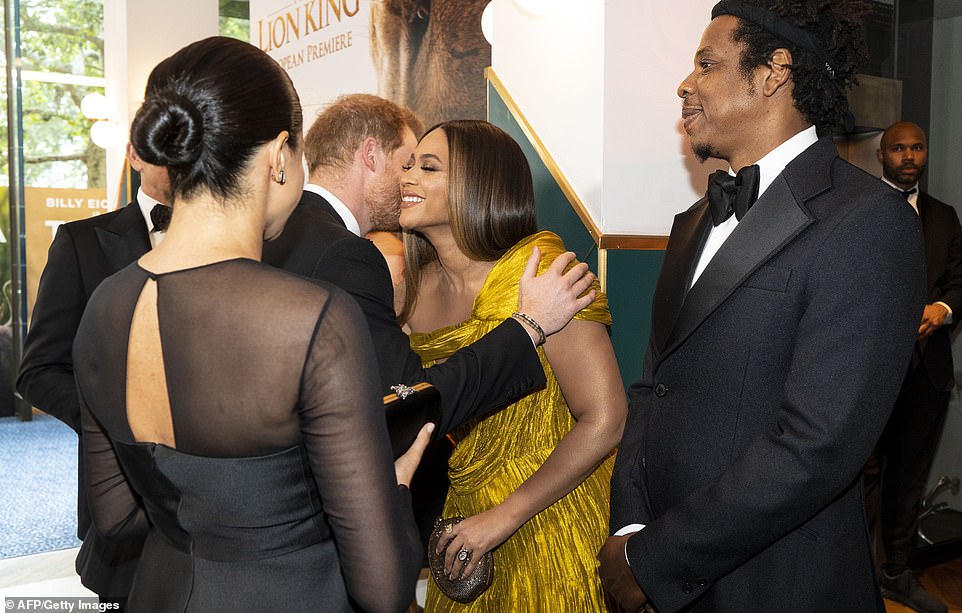 Beyoncé beamed as she embraced Prince Harry, before the group shared a short chat at the European premiere of The Lion King 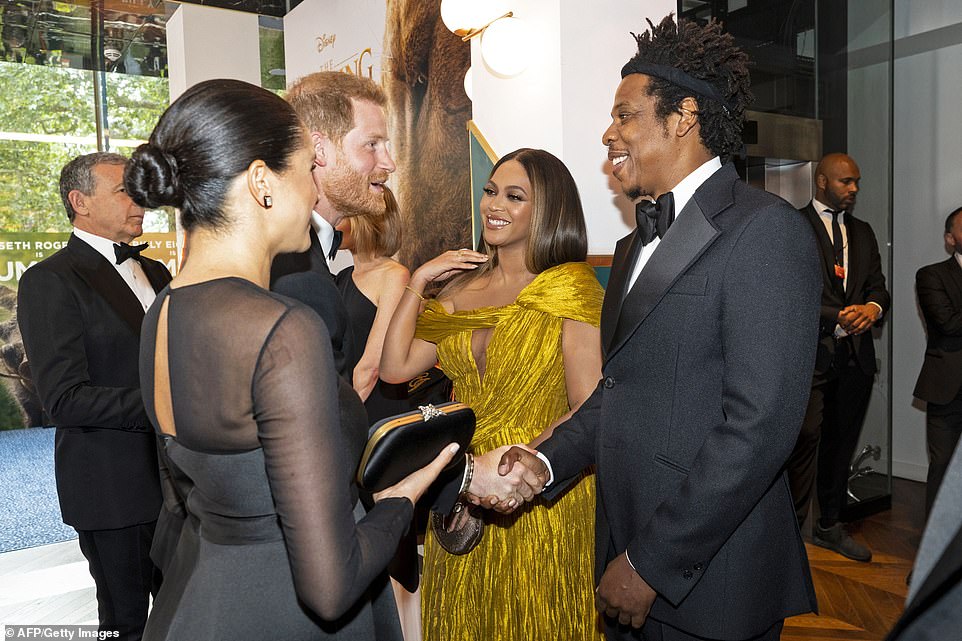 Jay-Z offered parenting advice to the new mother and father, telling the royal couple to make sure they made time for themselves 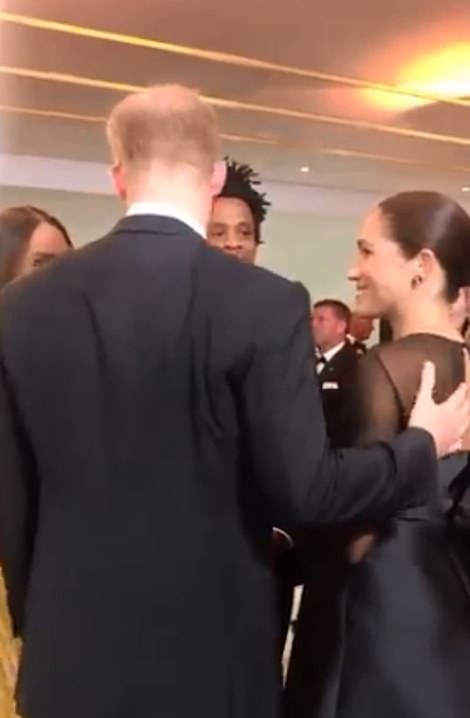 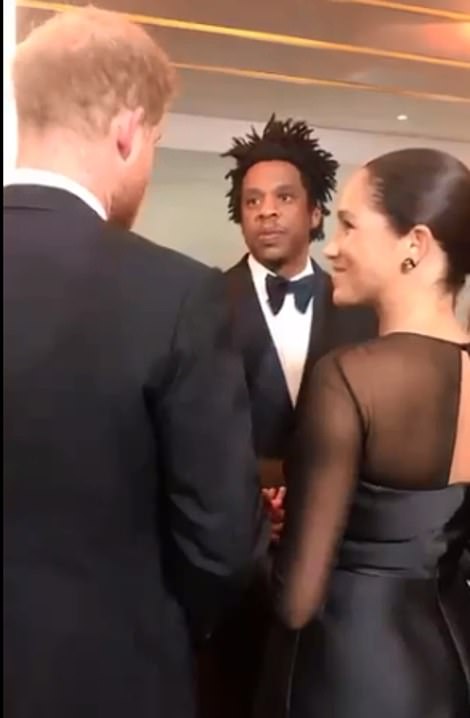 ‘We love you guys.’ Meghan then turned to introduce her husband, dressed in a dashing tuxe, who greeted Beyoncé with a kiss on each cheek and Jay-Z with a handshake.

‘You’ve been rather busy,’ said Harry to Beyoncé.

‘Congratulations on the birth of your baby,’ Jay-Z said to the prince, and nodded towards Meghan.

‘Wow that’s pretty intense.’ “And how are the twins? asked the prince, in reference to her children, Rumi and Sir, born in 2017.

‘They are not here. They don’t come on every trip,’ replied Beyoncé. ‘We left them at home. They would loved to have been here.’ 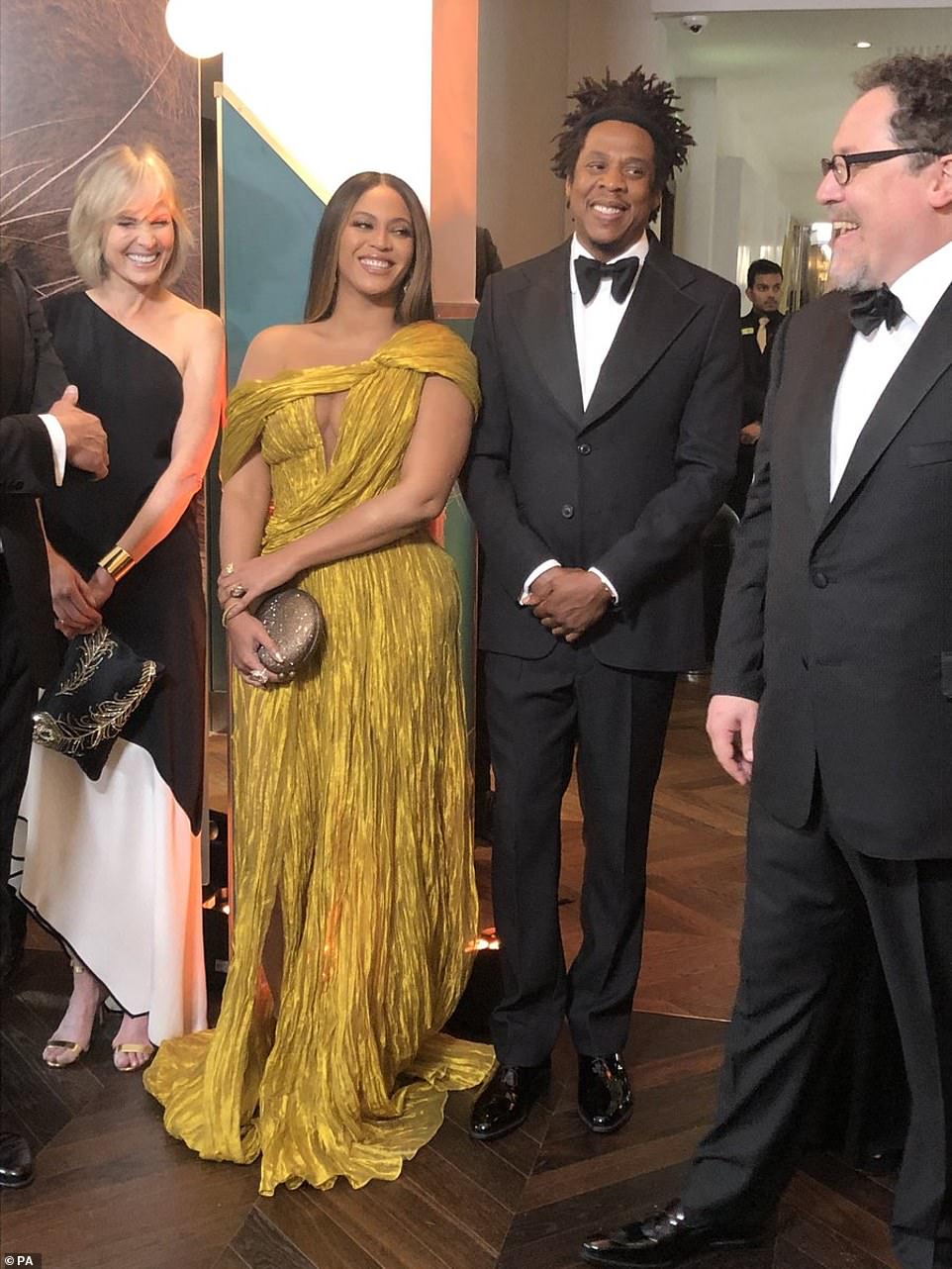 Stars of the film, including Beyoncé and her husband Jay-Z gathered inside the Odeon Leicester Square as they waited to meet the Duke and Duchess of Sussex

‘The best advice I can give you, always find come time for yourself,’ said Jay-Z.

Beyoncé honoured Meghan at the BRIT Awards in February, and shared a tribute to her on her website during Black History Month.

As part of her message, she wrote: ‘Meghan brought many Black traditions to her Royal Wedding including a Chicago-based Black pastor, an amazing gospel choir, and a young Black cellist.

‘At the wedding her culture was front and center, and she and Prince Harry have continued to push the race relations dialogue forward both near and far.’ 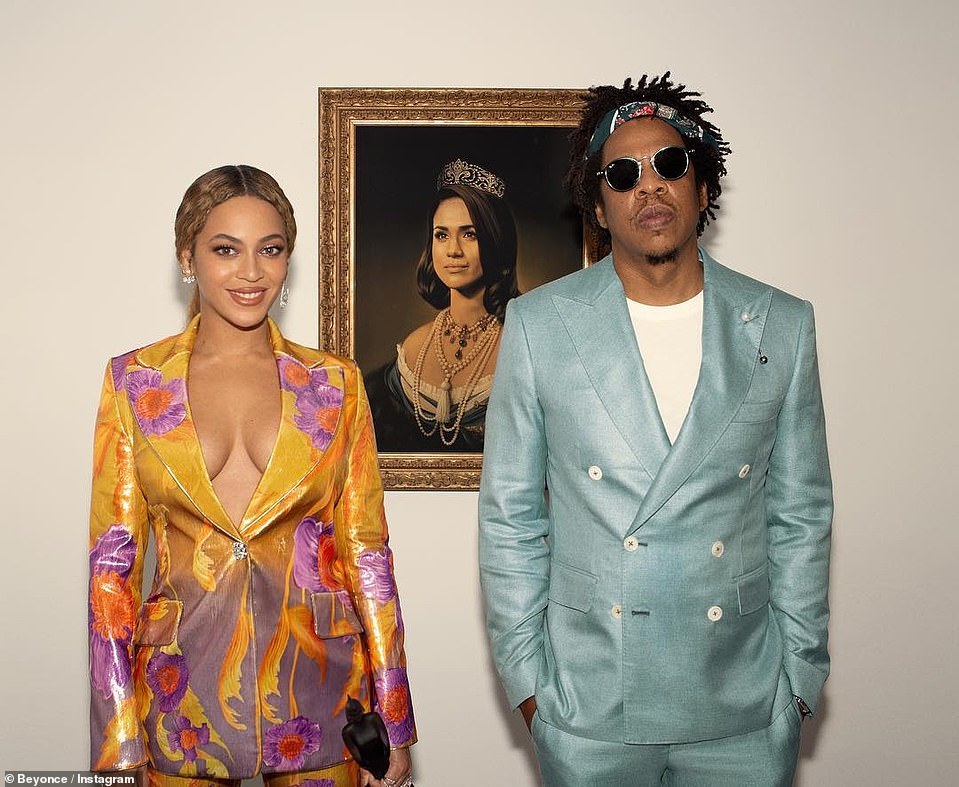 Beyoncé and husband Jay-Z have paid homage to Meghan on several occasions, including their BRIT awards acceptance speech in February of this year